The anime series Yu Yu Hakusho was quite popular in my country back in the day, so as soon as I found out about the wonders of emulation, I immediately checked out all of the Yu Yu Hakusho video games that I would never have known because they only came out in Japan. Of all those games that I played back then, the first one released on the Super Famicom stood out to me so much that I still remember it fondly. 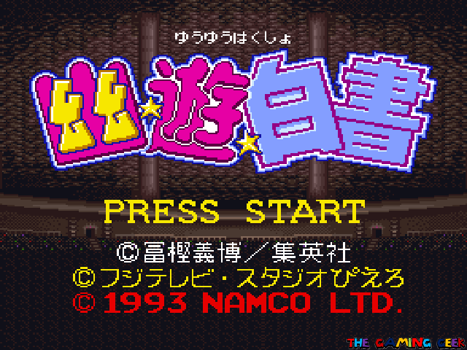 Title screen for Yu Yu Hakusho for the Super Famicom.

Yu Yu Hakusho was developed by Namco for the Super Famicom. To be honest, I don’t know what the official classification of this game is. It plays like a fighting game but instead of controlling sprites, you’re looking at entire scenes. The combat happens in real time but when a move is executed, you need to wait for it to resolve.

The game has a single player story mode that will take you through the significant fights in the anime’s first and second story arcs. Given that the second story arc, known as the Dark Tournament Saga, is the longest arc of the anime, this game’s roster of characters is mostly from that arc. Since the story mode is following the anime’s plot, you can only choose to play as the protagonists. 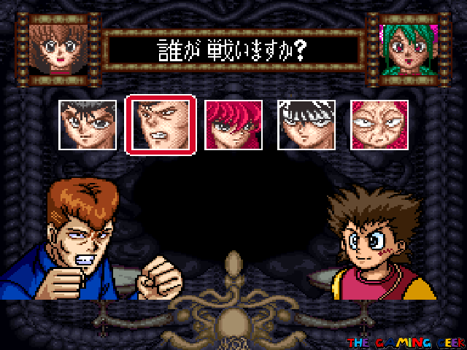 The five main protagonists of the anime (from left to right): Yusuke, Kuwabara, Kurama, Hiei, and Genkai.

The game also has two exhibition modes which can be played with one or two players. The first one is a standard one on one match, while the other is a five on five team battle. At first, most of the fighters are locked. To unlock them, you’ll need to beat them in story mode. 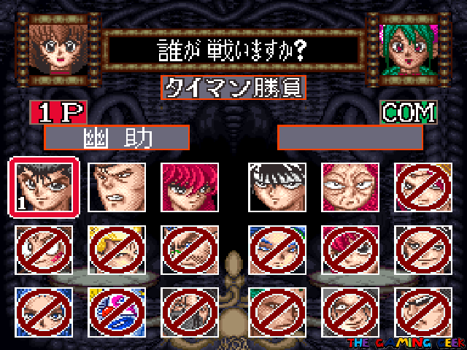 The game has a roster of eighteen playable characters. Can you name them all?

Before we talk about Yu Yu Hakusho’s fighting system, we need to talk about the HUD first. You’ll need to refer to the image below this paragraph for the markers that I’ll be using. First, each fighter has a health meter at the top of the screen (1). You start with a full yellow bar which represents 50% of your health. The red bar is the remaining 50% of your health. A fighter loses the match if the red meter is completely depleted. 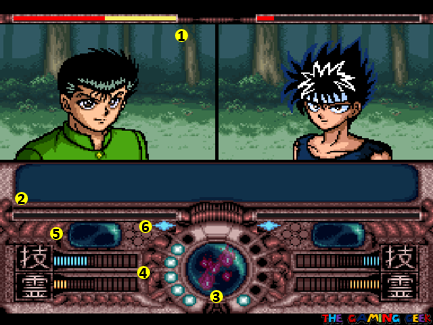 The battle screen has a lot of different meters and indicators.

The action bar (2) is a meter that fills up as you press the D-pad. This determines the power and chance to hit for your moves, which we’ll discuss in detail later. There’s a sphere (3) in the middle which indicates a reward. Usually, these are balls of fire that you can use to refill your energy bars (4). Blue energy fuels your UP moves, while yellow energy fuels your DOWN moves.

Sometimes, the sphere will contain item boxes instead. When you win an item box, it goes into the item box slot (5). There are three different types of item boxes. They either refill your health, your blue energy, or your yellow energy. Finally, you’ve got a stagger indicator (6). It starts at blue but changes color. As you take damage, it will move towards a shade of red. When it turns red, you will get knocked down and your opponent will get a free hit.

Executing moves in Yu Yu Hakusho involves pressing and holding a direction on the D-Pad, and then pressing a face button. As you hold a direction, the red action bar will start to fill up. You need to make a decision at this point. Do you press a face button and move before your opponent does? This will mean that your move will be less powerful and have a lower chance to succeed. You can hold it down longer, but your opponent will have the initiative. 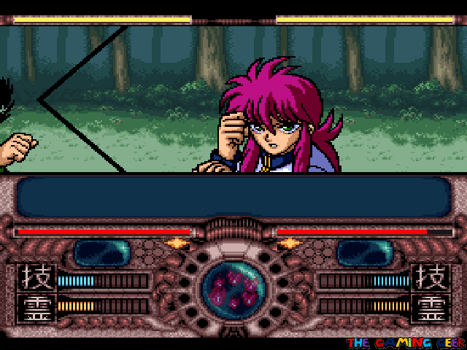 Kurama will act first but his move will be less powerful and have a lower chance to succeed.

The best choice will depend on the moment. Sometimes, it’s better to react to your opponent. Other times, it’s better to make the first move. Moves or actions are classified into four categories and for simplicity, let’s name them after the direction that triggers them. 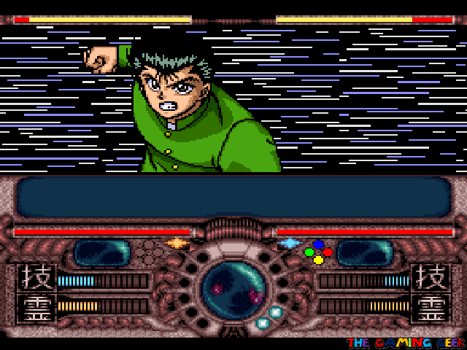 Yusuke going for a normal punch. 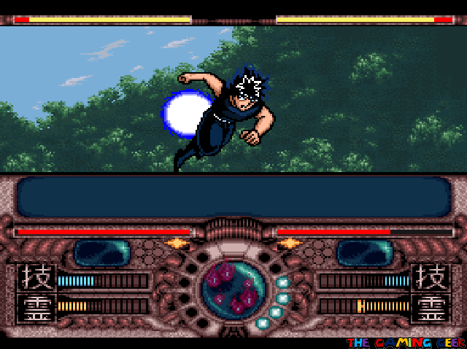 The BACK moves are defensive moves. To attempt to dodge a projectile attack, press Back and Y. To defend against close range special moves, press Back and X. Pressing Back and B defends against FORWARD moves. And Back and A is a generic block against everything. Choosing the right defense involves anticipation and guesswork. The wrong defensive move is a sure way to get hit. The generic block only reduces damage, but you still lose that specific interaction (more on this later).

I’m calling these special moves because they either consume blue energy or yellow energy. The DOWN moves are the offensive moves and are more consistent across the different characters. These moves consume yellow energy based on how strong they are. Down and B is the weakest (Level 1) special attack but it also consumes the least amount of yellow energy. 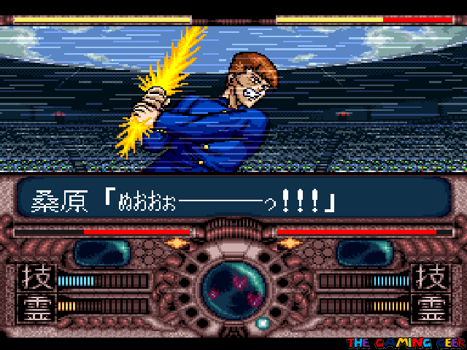 Kuwabara’s Down B is his Spirit Sword attack.

Down and Y is the next strongest (Level 2) and is usually a projectile attack. Down and A is the Level 3 attack and is usually a melee attack. Even if this is a special attack, you can’t hit airborne opponents with this move. 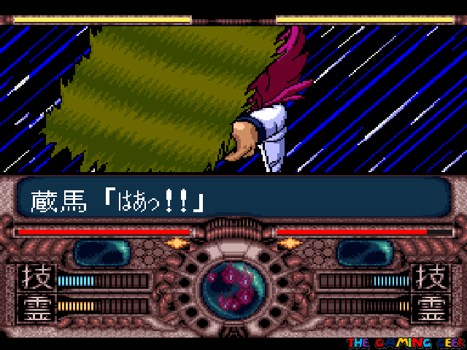 Kurama’s Down A move is the Rose Whip.

Finally, Down and X is your character’s strongest attack. I didn’t get the chance to play with anyone aside from the protagonists so I’m not sure if this applies to the other characters. All five protagonists have a projectile as their Down X attack. 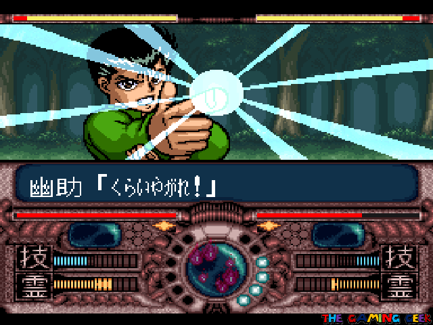 Yusuke’s Down X move is his trademark Ray Gun.

Meanwhile, the UP moves consume blue energy. Of the four possible UP moves, only two are consistent with all characters. Pressing Up and X makes your character jump high in the air. The fuller the action bar is when you jump, the longer you stay airborne. Jumping is important in this game because it usually counters normal and special melee attacks.

My term for two fighters making a move is “interaction”, and every interaction will have a resolution. This part of the game is like a more complicated version of rock-paper-scissors with some randomness mixed in. One really good example is jumping against a melee attack. Jumping is like the rock and a melee attack is like the scissors – jumping almost always beats out melee attacks. 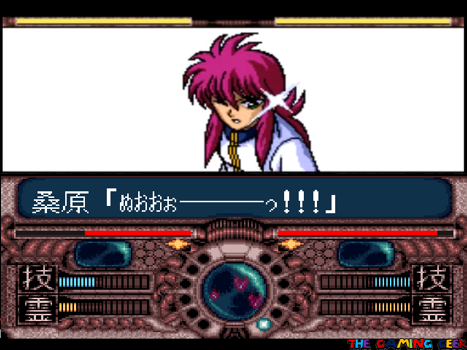 A small four point hit icon indicates that you were partially hit by an attack.

Sometimes, one fighter’s move will clearly trump the other’s, like in the above example. Dodging an attack completely is a “win”, unless your opponent also dodges your attack. If both of you dodge each other’s attacks, the interaction is considered a draw. Sometimes, you’ll get a partial hit from an attack which does minimal damage. 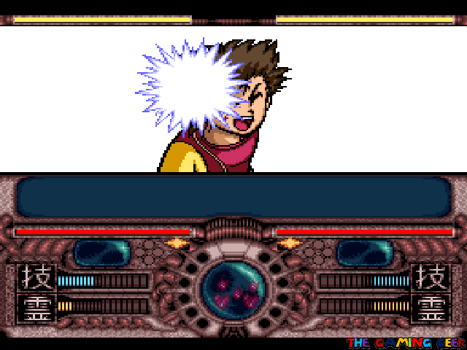 A solid hit is the worst that could happen to you.

What you don’t want to happen is getting a solid hit from your opponent. Not only do you lose the interaction, but you also take damage and your stagger icon gets closer to red.

It’s hard to win each and every interaction. The key to winning matches in this game is to win the interaction when there’s a lot of red fireballs in the reward sphere. As I mentioned earlier, these red spheres will refill your blue and yellow energy, which in turn will let you do more special moves. Regular moves are quite ineffective in this game. The best strategy, from my experience, is to manage your yellow energy and avoid using stronger moves when there aren’t a lot of fireballs to win.

It’s hard to properly assess Yu Yu Hakusho’s graphics because of how different it is from other games. You’re essentially controlling cutscenes for the entire game, so of course they’re going to look good. The animation itself doesn’t consist of a lot of frames, but the developers did a good job in giving the illusion of motion. 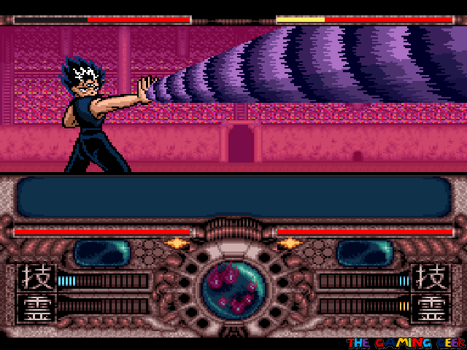 As for the game’s sound design, I really liked everything that I heard. From the tracks to the sound effects, everything fit the game’s theme. I don’t remember the anime’s original music at all so I’m not sure if this game used tracks from the series. I did like this game’s voice clips, especially Yusuke’s “Ray Gun!” battle yell. 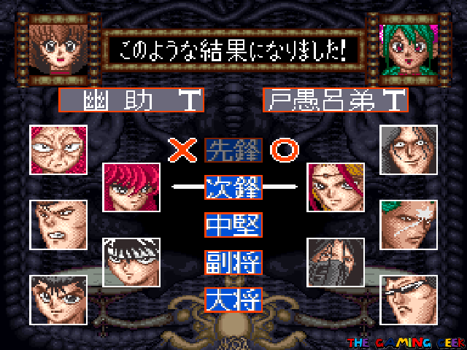 And in terms of presentation, I’ve got no complaints. The game’s HUD is pretty detailed and it fits well with the Dark Tournament theme. Menus are easy to understand even if I don’t know how to read Japanese. And the game has got a lot of cutscenes. I think the only improvement that I can think of involves the introduction before matches begin. They’re very bland and there’s no transition. I wish they copied what Capcom does for Street Fighter games.

Even though it’s been years since I watched a Yu Yu Hakusho episode, I was quite entertained by this game. It just feels different to play, especially when compared to other fighting games. This game relies on making quick reads and quick decisions instead of perfectly executing complicated button combinations.

But this game also has quite the learning curve to it. I had to make a visual aide to help me remember what button combinations did, at first. And even after I got used to that, I still had to learn what each character’s moves were. And then I had to discover what strategies were effective and what weren’t. When everything finally clicked, the game became really fun. Part of the enjoyment comes from feeling a spectator myself, because even though I did made the right choice, sometimes I would still fail thanks to RNG. So I eagerly awaited the result of every move up until the current match ended.

I understand that this game will likely be an acquired taste. Just because this game is quite unique, I strongly recommend for any Yu Yu Hakusho or anime fan to give this game a shot. I’d also recommend this to gamers who are interested in trying out video games that are unusual.

If you want to see more of Yu Yu Hakusho, click here for a playlist of gameplay videos on my Youtube channel! You can also click here to check out every Super NES video game that I’ve played.