X-Men: Mutant Apocalypse actually came before Capcom’s War of the Gems but for some reason, I don’t remember playing it back then. I don’t know why I don’t remember this. I was quite a fan of SNES games when Sony’s first Playstation became popular. 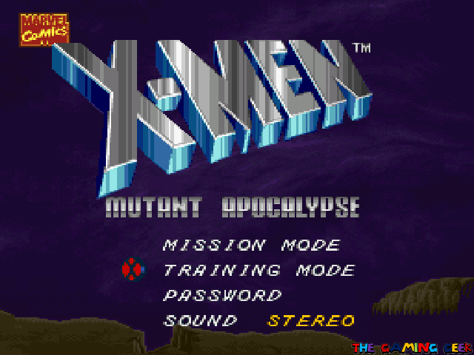 So, I was really excited when I finally had the chance to play this game. Let’s talk about my experience with it!

X-Men: Mutant Apocalypse is an action platformer developed and published by Capcom for the Super Nintendo Entertainment System. The game was released around the same year as the popular fighting game X-Men: Children of the Atom. In this game, you can play as the X-Men members Cyclops, Wolverine, Gambit, Beast, and Psylocke as they are given missions by Professor Xavier. 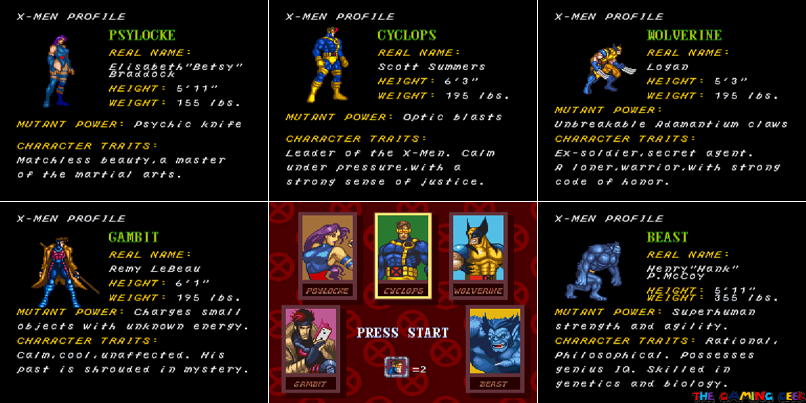 The roster of playable characters in X-Men: Mutant Apocalypse.

The game has a few beat ’em up aspects but I can’t classify it as a beat ’em up game. It’s true that characters have three to five hit attack chains that link up, and enemies take quite a beating before getting knocked out. But stages are on flat platforms, and there’s quite a bit of platforming required. So when playing it, the game doesn’t feel like a true beat ’em up game. 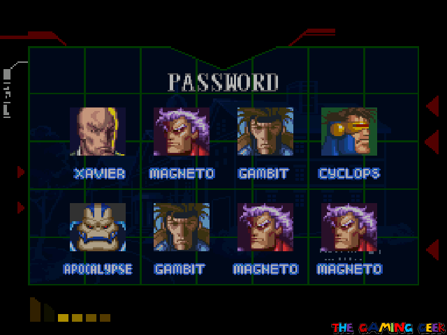 The game also has a Training Mode wherein each X-Men member has three lives, but you can only play the initial five stages. Finally, the game has a Password System that will allow you to continue the game. Passwords are only given at certain points of the Mission Mode.

Before we go into each specific character, let me just say that I’m happy that this roster is an almost perfect representation of the X-Men Blue Team lineup of the 1990s. I’m somewhat of a purist so seeing a lineup that’s true to the comic books is a plus. Each of the playable characters in X-Men: Mutant Apocalypse have similar basic moves. The D-Pad moves left or right or makes them crouch. You’ve got a button for attacking, which works while standing and crouching. You’ve also got a button for jumping, and they can attack in the middle of a jump.

However, each X-Men member has unique abilities and special moves. Capcom embraced their Street Fighter expertise by assigning some of these moves to fighting game style combinations. Cyclops can use his optic blasts as attacks, which he can do in mid-air or on the ground. This has a starting lag on the ground, but is strong enough to kill regular enemies in one shot.

Gambit also has a projectile attack in the form of his charged cards. He can throw three of these spread out, or toss one forward or upward quickly. It’s not as strong as Cyke’s optic blasts but it comes out faster. He’s also got his staff for melee combat.

The remaining X-Men don’t have projectile attacks, but have some unique abilities in addition to their melee special moves. Beast can stick to ceilings, allowing him to attack from above or to reach higher areas. Wolverine can climb up walls via his claws. And Psylocke can bounce off of enemies after a flying kick, letting her reach higher elevations and even avoid enemy counter attacks.

X-Men: Mutant Apocalypse can be very difficult. The problem with this is that it’s quite hard immediately at the start. Earlier, I mentioned that each character only has two lives. If one of your X-Men runs out of lives during the game’s first five stages, it’s game over. You won’t get any passwords during this section, so you’ll need to beat each stage without any character running out of lives. Normally, the first levels of a video game are supposed to be easier as players are just learning the game’s mechanics at that point.

Another thing that makes this game hard is the enemy AI. Like a beat ’em up, they are programmed to surround you and attack you from behind while you’re busy fighting someone else. In a beat ’em up, that’s fine, because you have a plane that you can move around on. It’s easier to avoid getting surrounded in those games. 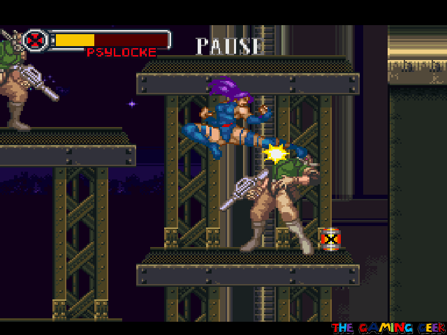 Always remember where the Health refills are.

In this game, that can be difficult because stages are flat. The only way to keep an enemy off your back is to knock them down first or jump over them. And you take so much damage, it’s easy to get killed by normal enemies. Most stages have very few health refills, so you will need to be very careful with your health.

Finally, I don’t agree with assigning special moves to fighting game combinations. This makes them harder to execute, for one. My biggest issue with this design choice is, this wasn’t made because of controller limitations. The game makes use of two buttons, and the SNES has a six button controller. For me, this just makes the game harder to play unnecessarily.

What I look forward to the most when playing a superhero video game are boss battles. These are the moments when I can battle supervillains as different superheroes. In this aspect, X-Men: Mutant Apocalypse didn’t disappoint. In this game, you’ll be able to battle different enemies taken from the X-Men comic books, such as the Brood Queen and different kinds of Sentinels.

Battling a Sentinel and the Brood Queen.

These battles are amazing, at least for 16-bit standards. Each boss acts like you’d expect them to, based on their comic book incarnations. Sentinels shoot out laser beams and throw out explosives. Tusk has his mini Tusks running around, trying to restrict you while he uses brute force melee attacks. Apocalypse has attacks that make use of his body-shifting powers.

You even get to fight classic X-Men villains like Magneto, Omega Red, Juggernaut, and Exodus in this game! I enjoyed these battles so much, I replayed some of them several times, trying out different X-Men characters against the villains.

Battling Omega Red and the Juggernaut.

I wish I could say the same about the game’s story. It wasn’t bad, but I found it to be lacking. The beginning was great – Professor X gives each of the X-Men specific instructions, which explains why you had to play specific characters in specific stages. After that point, the story kind of sputters a bit, in my opinion.

Near the end, each X-Men member will have his/her own final stage before the confrontation with the final boss. And the ending will feature the X-Men character you used to beat the final boss. The difference isn’t huge – it’s just a sentence or two. Still, it’s a good challenge to try and beat the final boss using all five of the playable X-Men.

X-Men: Mutant Apocalypse has amazing graphics. The sprites used for the X-Men and the known villains are all large, detailed, and well animated. Regular enemies are also nicely done, even though there’s only a few types of them. Stages also look great, but most of the stages are limited to being in a location outside of an enemy base or inside of an enemy base. So even if the stages look different, they feel kind of the same. 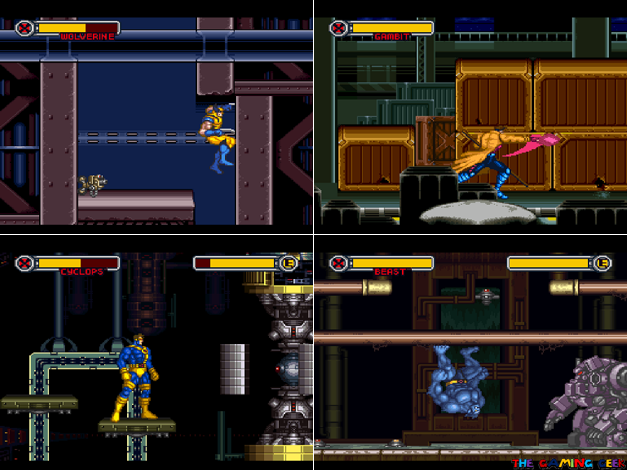 Stages are either inside the enemy’s base…

As for the game’s sound, it’s also well done. Sound effects are apt and clear. You even get an “ugh” from enemies every time they get killed, which is very helpful in terms of gameplay. I also liked the game’s music but I’ll be honest, for some reason, the game’s music didn’t really leave an impression on me. There’s enough variety and the themes are appropriate to the mood of the game, but they just don’t appeal to me compared to Capcom’s previous works. 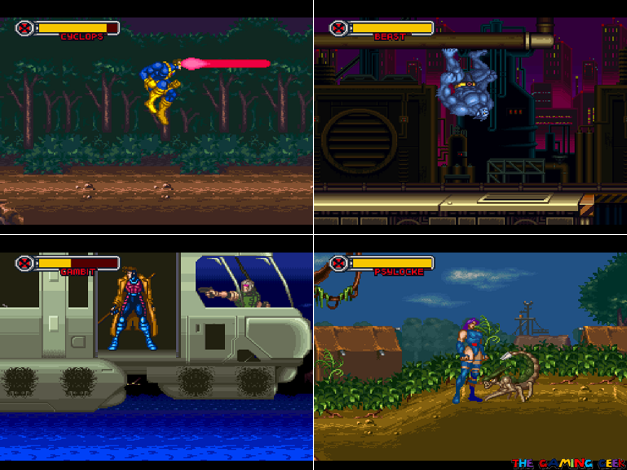 …or outside the enemy’s base.

Finally, the game’s presentation is really good. You’ve got cutscenes with exposition that gives you enough detail on what’s happening at that point in the story. There’s a lot of good art featuring the X-Men and their villains all throughout. Instead of using generic passwords, the developers used character portraits that look really good. So even getting new passwords can be a treat.

I’ll give you a little hint because I don’t want you to miss this. If you beat the game without losing any of the X-Men and continuing from a password, you’ll get a longer ending that features a lot of good character art. Once you get a hang of the game’s mechanics, it won’t be that hard to earn this reward.

While I do have some issues with X-Men: Mutant Apocalypse, I thought this was an excellent game. It’s annoying that I have to do quarter circle moves or “shoryuken” motions to use some of the X-Men’s powers, especially when I have so many unused buttons on the SNES controller. And the game being very difficult immediately at the start was jarring.

Once you get past the individual sections and are allowed to play as any of the X-Men, the game experience improves a lot. And the boss battles do make up for the lackluster story. I mean, this is an action game, not a role-playing game, so the story isn’t as important. And the action in this game is really good.

This game’s 16-bit graphics have aged graciously, still looking amazing today. With solid controls and gameplay that doesn’t have game-breaking problems, X-Men: Mutant Apocalypse is definitely worth revisiting, especially for fans of the X-Men, Marvel characters, or superheroes in general. Is this the best X-Men game of this generation? For now, what I can say is this is definitely one of the better ones.