I remember playing the Sega Genesis version of The Incredible Hulk when I was younger. However, I don’t remember much about that game. I remember the game being quite difficult, and that I didn’t get to see the real ending because it was locked behind harder difficulties. Instead of revisiting the same version, I decided to play the Super Nintendo version instead. Let’s talk about it. 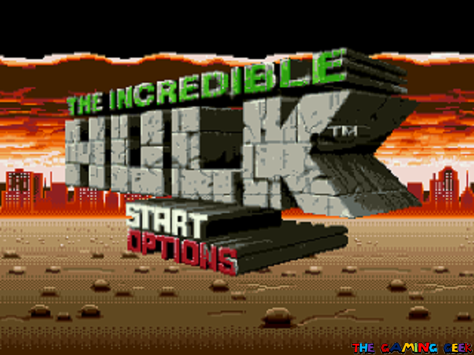 Title screen for The Incredible Hulk on the Super Nintendo Entertainment System.

The Incredible Hulk is an action platformer developed by Probe Entertainment and published by U.S. Gold. In the game, you take on the role of the Hulk as he tries to mind his own business, but particular bad guys just can’t seem to stop bothering him wherever he goes.

As the Hulk, you’ll have to make your way from the start of each stage up to the end, where you’ll have to battle a boss. Some of the game’s stages have alternate paths. For example, the first level will make you choose between going through the sewers or through a skyscraper under construction. Stage locations range from a normal city, an ancient temple, and multiple hidden bases.

The first stage of the game takes place in a city.

Similar to most action platformers, you have a lives count and a health meter in this game. When you run out of health, fall into a pit or an insta-kill stage hazard and you lose one life. Run out of lives and it’s game over.

What makes the Incredible Hulk unique is the health system. How much health you have dictates what kind of moves Hulk can do. Hulk’s peak strength is called “Hulked-Out” mode and this is when your health is filled up to the light green section (more than 70%). In this mode, Hulk can supposedly do a lot of secret moves, but I could only do one of them – the running charge. 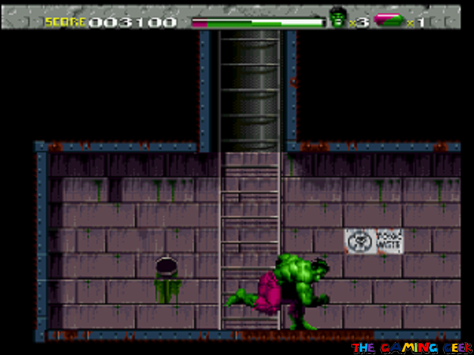 The Hulk’s running charge is my favorite attack.

At 10% or less health, you turn into Bruce Banner. Banner is quite limited; he can’t attack enemies and he can’t destroy barriers or objects. You can find guns, but they can only shoot twice. Usually, when you turn into Banner because you ran out of health, you’re as good as dead. 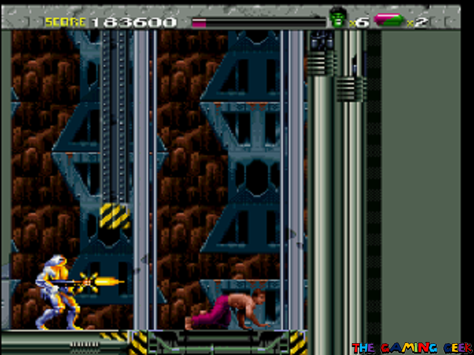 Bruce Banner is quite helpless in this game.

Banner can do something that Hulk cannot: fit into tight corridors. You can turn into Banner if you have special capsules. Pressing Select consumes one of these capsules and turns you into Banner. If your health meter is in any of the green sections, getting hit as Banner will change him back to the Hulk.

I like the idea of a system revolving around Hulk’s health, but I disagree with how they did it. The Hulk gets stronger the angrier he gets. So I’m inclined to do the reverse here and make him stronger the more damage he’s taken. This way, it forces players to choose between risk and reward.

So I alluded to this already but I’ll say it explicitly this time. The Hulk supposedly has a lot of moves that he can do, especially in Hulked-Out mode. But I can’t do half of them. I’m not sure if what’s posted online is wrong, but I’m trying to execute the button combinations and it’s just not working for me. In my entire playthrough, I was limited to the Hulk’s punches as well as his running tackle. Occasionally, I would do a standing or jumping foot stomp, and that’s about it.

The second stage is in the ruins of an ancient temple.

I don’t know what’s wrong, but because I was limited in what I could do as the Hulk, I didn’t have a lot of fun in the combat. Especially because of how the regular enemies were designed. The majority of what you’ll face in this game have ranged attacks. That means each and every enemy can hurt you, even by just a little.

And I don’t know how but, these enemies take so many hits from the Hulk. So even if you’re in Hulked-Out mode, you don’t feel like you’re playing as the Hulk. Most of the mobile enemies also have the tendency to run away after taking a hit, so you have to either chase after them or just ignore them.

The developers love putting these gunners in places where you can’t avoid their shots.

Finally, I hate how the developers of this game are quite fond of unfair enemy placement. They just love putting gunners right in front of ledges, or in corridors where you have to walk quickly. These spots are simply annoying, especially since you won’t be able to do Hulk’s best moves if you get knocked off Hulked-Out mode.

When playing a video game based on comic book superheroes, I’m always looking forward to the boss battles. While The Incredible Hulk does feature bosses based on actual comic book villains, these battles are very simple. The most important battle to talk about are the ones with the Abomination.

You’ll face the Abomination in every level of this game.

I said “ones” because the Abomination is a sub-boss for each and every level of this game. And it’s weird because supposedly, Hulk does one of his long distance leaps every time he leaves one stage and goes to the next. Somehow, the Abomination is able to chase after you each time.

The battles with the Abomination play out like classic Urban Champion fights, where you just have to land more punches than he can. What I don’t like about these fights is that it’s the same exact fight every time. Because of this, the battles feel quite repetitive. If we were going to fight him several times, I wish the developers changed his attacks and moves in succeeding fights. He’s also a big pushover if you’re in Hulked-Out mode; just keep charging into him until he runs out of health.

Bosses in this game only know how to do one move.

The rest of the bosses are one move shmucks. Rhino just keeps charging at you. Tyrannus just flies over you, shooting fireballs. The Absorbing Man spins his ball and chain around. We’re talking about a 16-bit game here, so I’m expecting a little more depth. The final boss, which I will not spoil, is an anti-climactic battle. I can see what the developers were going for but it doesn’t really work.

In terms of graphics, The Incredible Hulk has some good things going for it. While a bit dated, sprites and stage backgrounds have good quality and have enough detail. The problem isn’t with the quality of the graphics, but how generic they are. Whatever the stage, it always looks like you’re exploring the same areas, even if the layouts are different. This is especially true once you get past the first stage.

The fourth stage is inside a massive organism.

You will face the same pair of enemies in three out of the game’s five stages. I can’t think of any good reason why the developers couldn’t be bothered to come up with more types of henchmen. Fighting the same two enemies over and over, using the same moves, in similar looking areas, just multiplies the feeling of repetitiveness that this game provides.

The game’s music is okay, but it suffers from not fitting well with the theme of the game. It’s the kind of chill music that belongs in a city driving game like Outrun, or Paperboy. The music belongs to games that aren’t about superheroes and battling villains. Nothing bad, but the music just feels out of place. Sound effects are okay, but I did like the Hulk’s grunts and growls, whenever it happened.

These comic book panels help tell the vague story of this game.

In terms of presentation, the game has a quick intro shot of the Hulk punching through the company logos of the developers and publishers (he should). There’s also a set of comic panels showing the Hulk transforming. In between stages, the story is told through comic book style panels. I think these are all okay, except that the story doesn’t really make a lot of sense and the font they used makes it hard to read the text. Nothing much to complain about, but definitely nothing to rave about either.

Before starting my playthrough of The Incredible Hulk, I was looking forward to all the different moves that I read about. I was disappointed that I could only do around half of what I know exists. I don’t exactly know what the problem is, but the limited move set did affect my enjoyment of the game.

Which is bad, because this game is remarkably mediocre. It’s not broken, and it doesn’t have major gameplay issues. But it also doesn’t have anything that it does really well. The idea of turning into Banner and playing as him could’ve been better utilized, but it just ended up as a way to access small, secret areas or level shortcuts. The idea of having Hulk in different strength levels was okay, but I wasn’t able to enjoy it because I couldn’t execute his moves. It also falls flat because you’re just fighting the same enemies over and over, or against bosses that only know one attacking move.

The Incredible Hulk is definitely playable, but because it’s so mediocre, I would have to ask myself why anyone would bother spending time on this game when there are so many other games to spend time on. So if you really love superheroes and you’ve run out of superhero games to play on the SNES, then you can try this out. If you’re a big fan of the Hulk and really want to play one of his games, you can try this. Otherwise, just skip this and spend your time on better games instead.

For more video games based on Marvel characters, click here. And click here to check out every SNES video game that I’ve played.