I still don’t understand why The Amazing Spider-Man: Lethal Foes was a Japan only release. Spider-Man is well known all around the world, so fans of the character are sure to buy copies of this game. Whatever the reason, the game never made it outside of Japan and a lot of people don’t even know that it exists. So I was very excited to play a fan-translated version of it. 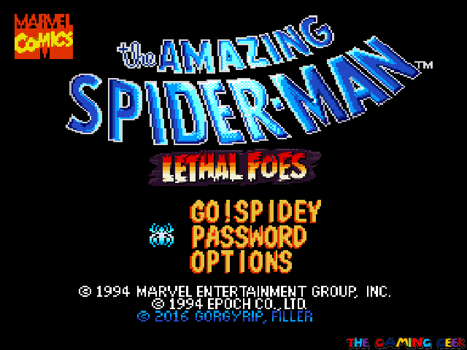 Title screen for The Amazing Spider-Man: Lethal Foes for the Super Famicom.

There are two fan translations available and I played the newer release. The talented person behind this version is “Gorgyrip”, who did two versions: a standard version and an all-caps edition. Let’s talk about it.

The Amazing Spider-Man: Lethal Foes is an action platformer that was developed and published by Epoch Co. The game is supposedly based on the comic book mini series the Lethal Foes of Spider-Man, but the stories are quite different. In this game, Doctor Octopus has been stealing different kinds of equipment. At the same time, an army of Spider-Slayers have started attacking New York. It’s up to Spider-Man to save the day. 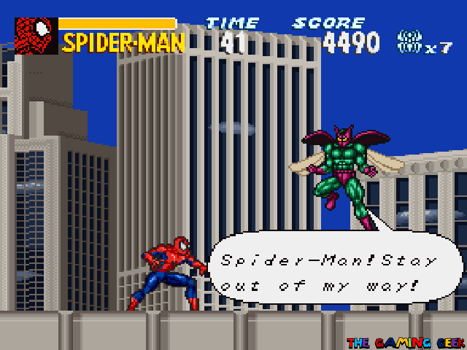 The game is split into several stages, with each having a time limit. You’ll need to get to the end of the stage before time runs out. If it does run out, you lose a life. Some of these stages have a boss character at the end, and you’ll also need to beat him before the time runs out. When playing this game, you have to keep in mind that you need to get to the end as fast as you can.

You’ve got a health meter in this game,  as well as a number of lives. Throughout the stages, you’ll be able to find power ups that can refill your health or give you extra lives. Some enemies drop these power ups too. In the Options Menu, you can choose to start the game with either three, five, or seven lives. You can also change the difficulty of the game here. This ranges from Practice, Easy, Normal, and Hard. You also have the option to change the face button configurations here as well. Finally, the game has a Password system for saving your progress.

The game is playable in Japanese, but you’re going to miss out on a lot of flavor text. The plot of the game is actually pretty good, so I recommend that you play the translated version if you can.

In The Amazing Spider-Man: Lethal Foes, Spider-Man can do his usual moves. He can walk left and right, crouch and crawl, and jump. His jump is a little floaty though, and it takes a while for him to reach the peak of his jump. At first, I was letting go of the jump button too soon, so I thought Spidey’s jumps were too low. You need to keep holding the jump button in order to reach the maximum height of his jump. 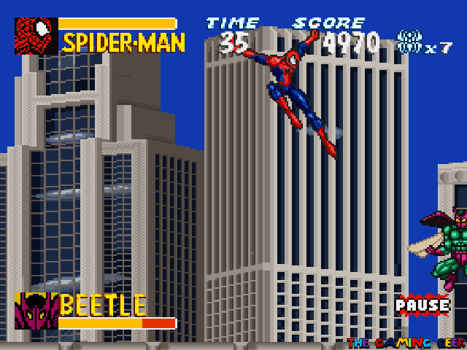 Spider-Man can really JUMP in this game.

Spidey can punch while standing. Tapping attack strings his punches, and the third hit is an uppercut that ends the combo and sends enemies flying. He does a low kick while crouching. He’s also got a handy upward punch that you can use if you need to attack an enemy directly above you. 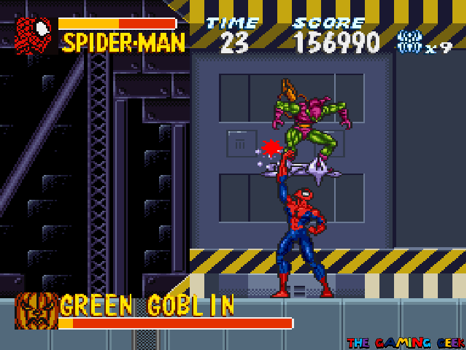 Quick hint on how to beat the Green Goblin.

In the air, he’s got a kick that sends him diving diagonally downward. This makes aerial combat tricky, because you need to be higher than the enemy you’re trying to attack in order to land your dive kick. 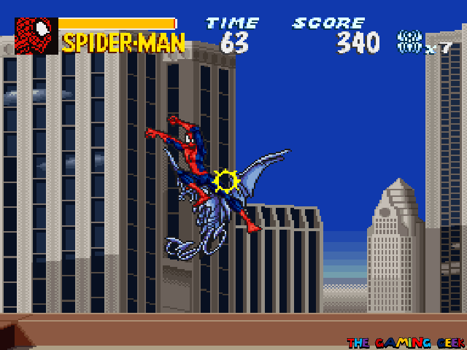 Air combat is a little difficult in this game.

He also has the ability to shoot web pellets, which deals a small amount of damage to enemies. It’s weird but, Spider-Man doesn’t use his webbing for restricting enemies in Lethal Foes. You have unlimited webbing, so you can spam the web pellet shot. 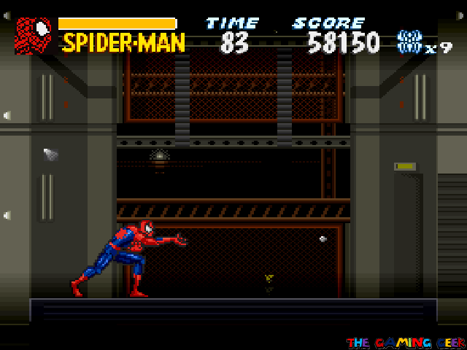 You can aim the web pellet upward too. Unfortunately, you can’t aim it diagonally. And I’m not sure if you can shoot directly downward, but I can’t imagine that you’ll need to.

Spidey can also crawl up walls and ceilings, and even along some walls in the background. However, there are some issues on how this was implemented in The Amazing Spider-Man: Lethal Foes. The first problem is that Spidey doesn’t wrap around surfaces. Moving from a wall to a ceiling or floor is harder than it needs to be. 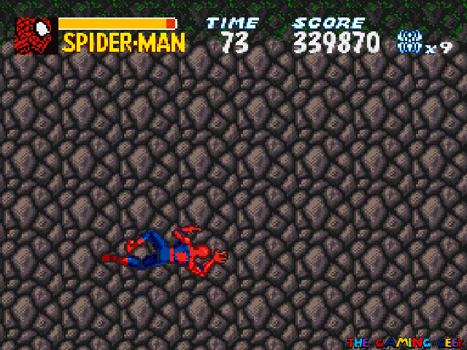 Some sections will require you to do this.

Spider-Man is also quite vulnerable when wall-crawling. He can’t do melee attacks while on walls or ceilings. And web pellets behave quite differently. When you’re crawling on the floor or across the ceiling, Spider-Man shoots his pellets horizontally in front of him. When he’s against a wall, he shoots these pellets towards the opposite wall. So if there’s an enemy crawling up the same wall, you can’t attack it. 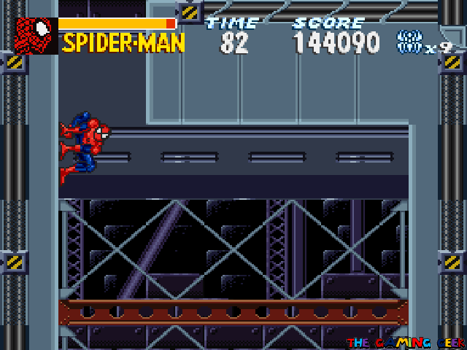 What’re you looking at me for? I’m not the one who forgot to program wall attacks for you.

Web swinging is implemented differently in this game. This move is assigned to the shoulder buttons. Pressing L will make Spidey shoot a web-line to his left, and R to his right. Web swinging is so fun in this game, just press and hold a shoulder button and see Spidey fly. Don’t worry about missing out on the stages, since the game was designed with the goal of getting to the end as fast as possible in mind. 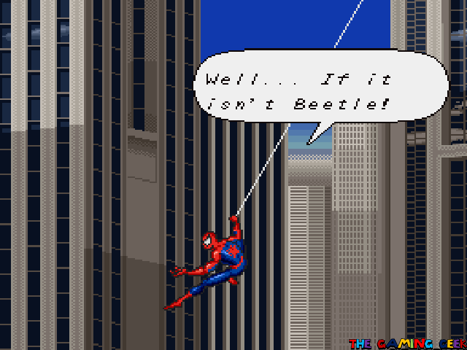 Web-swinging was so fun, I forgot to take an in-game screenshot of it.

Speaking of fast, Spidey has a run button in this game, just like Mario. This is handy especially for long corridors. Pressing the attack button while running will execute a shoulder charge. So feel free to run as often as you need to.

Amazing Use of the License 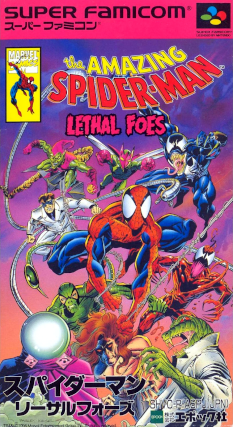 And the storyline reads like it was written by writers from Marvel Comics themselves. As Spider-Man is following the trail of Doctor Octopus and the Spider-Slayers, he crosses paths with many other villains. You’ll face the likes of Venom, Carnage, Mysterio, the Lizard, Scorpion, the Beetle, and the Green Goblin in this game. They fit well in the game’s storyline. I never felt like a villain was forced into the plot. 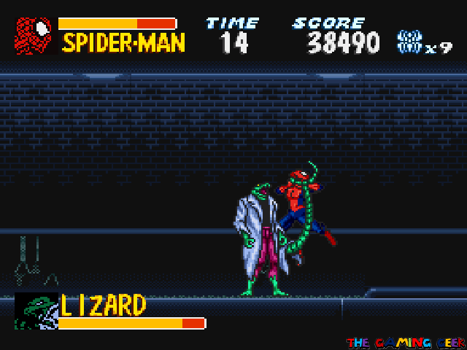 Battling the Lizard in the sewers.

And these battles are well-designed, for the most part. Each boss has attacks and moves that are true to their characters. Some of the early bosses suffer from “one attack syndrome”, but the battles with them were still very satisfying. And Lethal Foes also features cameos from Spider-Man’s friends too. 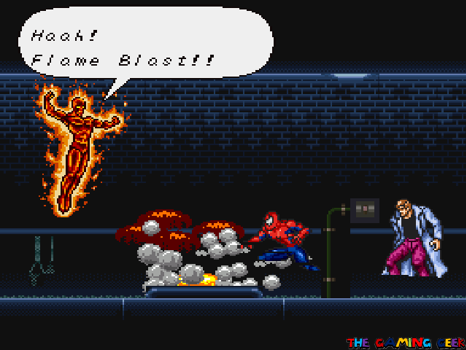 There’s no gameplay benefit to the guest appearances. But they help increase the immersion, and I’m sure comic book fans and Spider-Man fans will be happy to see them, as I was.

The Amazing Spider-Man: Lethal Foes is the best looking 16-bit Spider-Man game available, in my opinion. The sprites in this game look great in terms of detail and animation. In addition, they’re also quite thematically accurate. Spider-Man moves the way you expect him to, and the same can be said for his enemies. 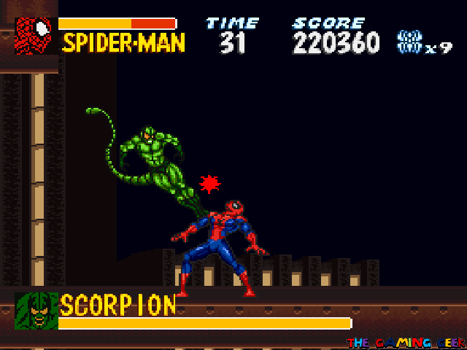 All the stages look amazing as well. They’ve got a lot of detail to them, and the developers made good use of color and lightning in them. I didn’t notice any advanced visual tricks that the SNES is known for, but they didn’t need to use any here. Especially since each of the stages were designed to be dealt with in two minutes or less. 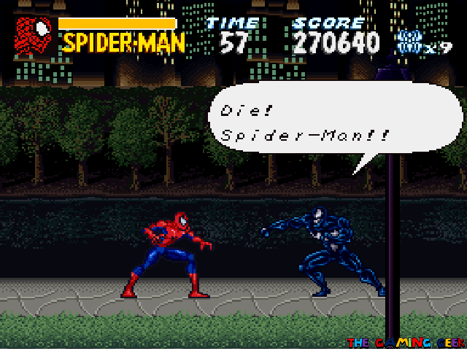 This game also has some amazing music. I don’t know why, but the game’s opening theme and the boss fight theme fit the character of Spider-Man so well. It’s like the themes were written with Japanese tokusatsu TV shows in mind, using a lot of brass instrumentation like trumpets. The other stage music were all great, but I’m going to remember the boss fight theme of this game for a long time. 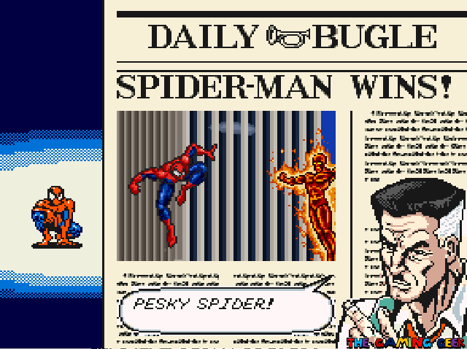 As for the presentation, the game is quite polished. Names use fonts that look like ones Marvel actually uses in Spider-Man comic books. Named characters have headshots right beside their health meters. If you let the game run idle, it’ll have detailed profiles on each of the characters featured in the game. While the game doesn’t make use of comic panel style art for cutscenes, they use word balloons and in-game art instead. So cutscenes still have that comic book feel to them.

While far from being perfect, The Amazing Spider-Man: Lethal Foes is a really good game. It has great production value, and it was made with a lot of respect for the source material. I think this would have gotten good reviews and it would have sold well if it were localized for English-speaking audiences. And yes, there are some design flaws that make the game feel a bit clunky. But it was easy for me to get used to the game’s mechanics and find a way to play around them. The positives of this game far outweigh it’s flaws.

Spider-Man fans and comic book superhero fans should give this game a try. And if you can, play the fan translated version, because the game’s storyline does make it more fun to play. If you don’t like superheroes or Spider-Man, the clunky gameplay mechanics might turn you off a little. As for me, I loved this game a lot. The Amazing Spider-Man: Lethal Foes is definitely in my top five when talking about SNES superhero video games.