Despite being more of a Marvel Comics fan, my favorite 16-bit superhero video game is The Adventures of Batman & Robin. Not only does it capture the essence of Batman: The Animated Series which this game references, but it is also a well-designed video game. So I was really excited about revisiting this game. 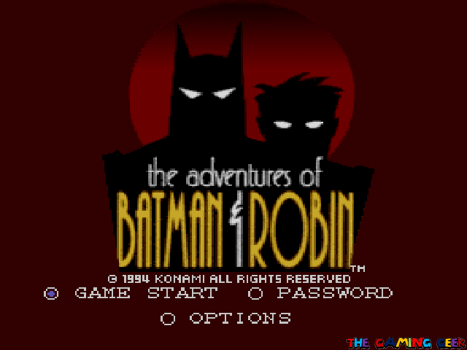 Title screen for The Adventures of Batman & Robin on the Super Nintendo Entertainment System.

And you know what? After playing this game once, I can’t wait to play it again. Let’s talk about it.

The Adventures of Batman & Robin is a single player action platformer developed and published by Konami for the Super Nintendo Entertainment System. My first minor complaint about this game is that it’s single player only. Back then, I expected this game to have a two player mode because it says “and Robin” in the title. But it’s a nitpick that doesn’t really detract from the quality of the game.

What’s unique about this is that instead of having one major storyline, the game follows Batman on several different adventures. Each stage has it’s own short story, which is presented like an episode of the animated series. Konami used this approach for Batman: The Animated Series, a game that they released for the Game Boy a few months prior. In all these stories, you take on the role of Batman as he deals with different Gotham City criminals. 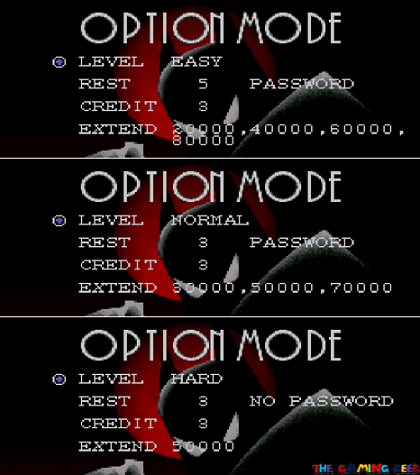 The number of lives and continues that you have will depend on your chosen difficulty level.

You’ve got a health meter in this game as well as a number of lives. You also have a certain number of continues. These will all be based on your chosen difficulty setting. There are three difficulty levels available: Easy, Normal, and Hard. The difficulty level also dictates the score thresholds for earning extra lives. 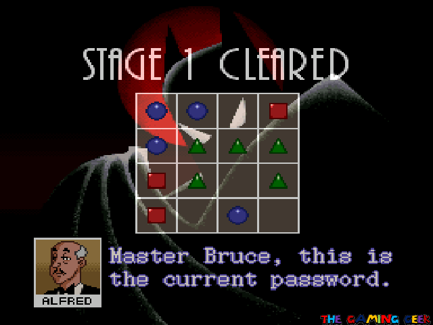 While there are health refills in the form of heart power ups, the only way to gain extra lives is to hit these score thresholds. You lose a life if you lose all your health, fall in a pit, run out of time (in some stages), or get caught by an instant death trap.  Finally, the game has a password system, but it is only available in Easy and Normal difficulties.

In The Adventures of Batman & Robin, Batman has most of the basic moves that you’d expect him to have. He can move left or right, and he can crouch. He can grab onto ledges and pull himself up. He’s got a wall jump that you’ll occasionally need to get to higher areas. He can also do a quick roll in this game, which works as both a dodge and as a short dash. 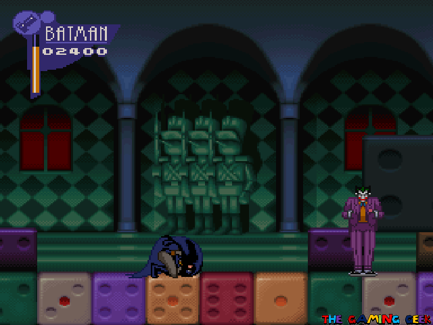 In terms of fighting, his move set here is actually pretty basic. He’s got a two hit punch combo while standing. While jumping or crouching, he uses kicks for attacking. He can also grab onto enemies and throw them. Throwing an enemy into another can also deal damage. 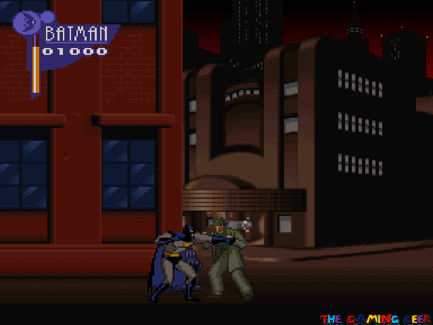 Batman only has a two punch combo at his disposal.

I’ve criticized other games before when they didn’t offer enough moves especially for combat. But strangely, it works in this game. Most regular enemies can be dispatched with just two or three punches. And boss battles, whether it’s a midlevel or end level boss, is designed in ways that still make combat very satisfying.

The Adventures of Batman & Robin equips Batman with a lot of different gadgets. Some of them are consumable, and you start each stage with a fixed number of them. The Equipment screen has the gadgets group together based on type. 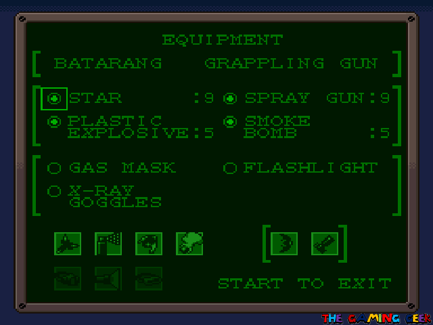 You can choose which gadgets to bring with you at the start of every stage.

The first pair are the Batarang and the Grappling Gun. You’ll always have these with you, and are reusable. The Batarang is a thrown weapon that doesn’t deal damage but can stun enemies. This is quite handy, especially against bosses. The Grappling Gun is necessary for reaching high areas and can even be used for swinging across gaps that are too large to jump over. 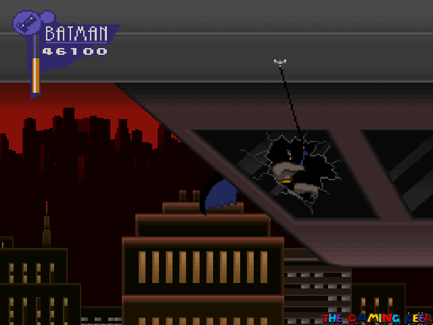 Swing across gaps with the Grapple Gun.

The next group of gadgets are the consumable items. The Star is a version of the Batarang that deals damage. The Spray Gun knocks enemies down temporarily, and is good for enemies that you can’t punch. Both the Plastic Explosives and Smoke Bomb are grenade-type weapons, with the former actually dealing damage and can break through weak walls. 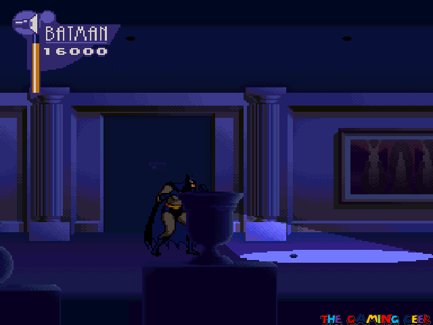 What does Batman call his flashlight? The… Bat-Flashlight?

The last group of items are always on when you equip them and don’t run out. They’re situational and each of them are only useful in a certain stage. Usually, you’ll get hints from Alfred during the stage intro scenes if you need to bring one of these. And if you’re thinking that it’s best to bring everything with you, it’s not. You only have one button to cycle through your items. So bringing too many of them, especially useless ones, will make it harder for you to actually get the item that you need.

Earlier, I mentioned that each stage in The Adventures of Batman & Robin represents a single episode. Can you imagine this game being able to tell a full story in a single stage? That’s what I love about this game. Most of the stages have a unique flavor to them that makes them play out differently. The first stage starts out normally, but ends in a thrilling roller coaster sequence. 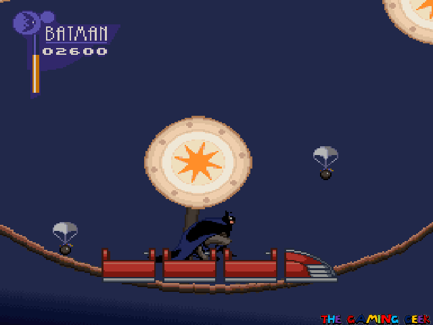 Can you survive the Joker’s roller coaster ride?

One of the stages has no enemies – except for Catwoman, who you are chasing across rooftops. In another, you have to check different rooms across three different floors in a museum building, looking for hostages. And there’s a stage that takes place in a virtual maze, where you need to solve puzzles in order to proceed. 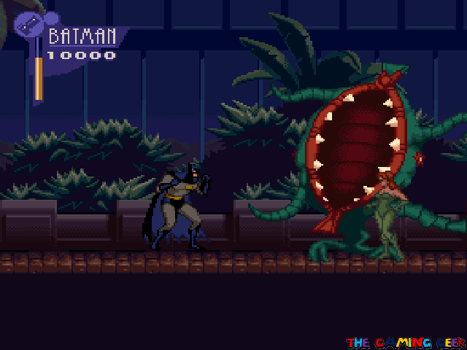 The battle with Poison Ivy.

And the bosses were also designed with their characters in mind. For instance, you won’t fight Poison Ivy directly. Instead, you’ll need to fight one of her monster plants. She’ll still take potshots at you, every now and then. The Riddler will have you go through a series of chess-based obstacles for his boss battle. 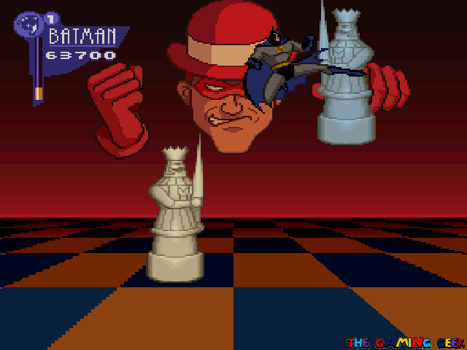 The battle with the Riddler.

The different stages and boss battles made it feel like I just experienced several episodes of Batman: The Animated Series. And despite Batman’s limited attacks, the experience was quite enjoyable.

Unfortunately, The Adventures of Batman & Robin isn’t a perfect game, and it’s got one major blemish. This comes in the form of Two-Face’s stage where you hop inside the Batmobile. These driving sections have a top-down perspective that reminds me of Road Fighter. Essentially, you’re given a time limit and you need to get to the goal before that runs out. 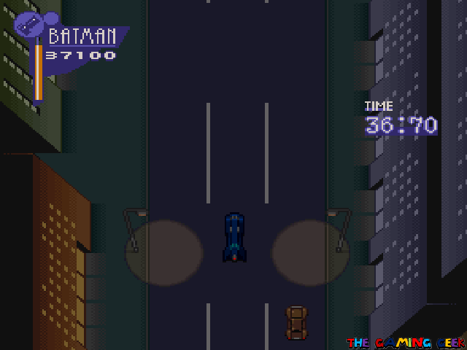 I hated the first Batmobile section a lot.

I’ve got several issues with these stages. The first involves turning corners. The Batmobile tends to skid while turning, so it makes it hard to stick to the road on turns. When you hit the sidewalk, you can come to a complete stop. Even if you start immediately, you would have lost some speed that you’d need to make up for. At Normal Difficulty, you can only afford to crash into the sidewalk once. Doing it twice ensures that you won’t make it to the goal on time. 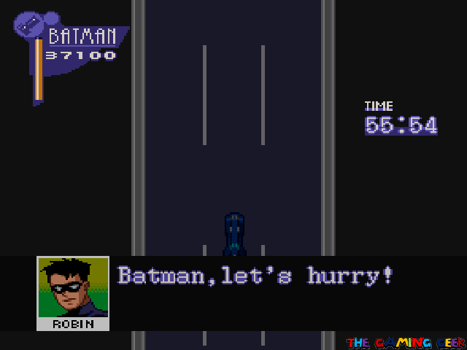 But there is no way to add to the time limit, or even to temporarily pause it. I tried shooting down the cars that I came across, but that just took more time off. So if you’ve already taken too many bumps, the entire level is a waste of time. I’m always up for a challenge, but anything that requires perfection just turns me off completely.

The Adventures of Batman & Robin is amazing in terms of production value. First of all, everything uses the famous Dark Deco art style that the animated series was famous for. Character sprites are very detailed and are animated well. They’re a little small but they work perfectly. And I’m happy that Konami was able to insert so many famous Batman villains into this game.

Even the stages look great. I’ve been going through all the screenshots that I took and everything looks great. During the Catwoman chase sequence, there’s a section where searchlights are going all over and you’ll get to see Batman’s and Catwoman’s shadows adjust. 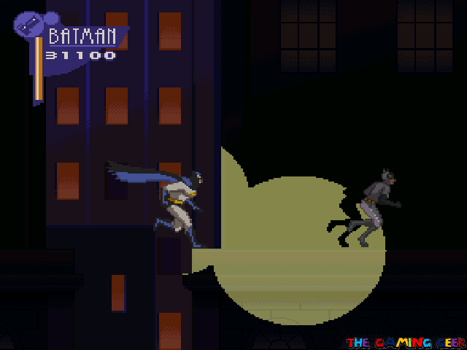 This scene is more impressive when you see it play out yourself.

The music and sound design of this game is excellent as well, but that’s because Konami was able to secure themes from the animated series. Each theme being played is apt to the situation happening onscreen. You’ll hear something mysterious or foreboding whenever suspense is needed, and a theme that’s faster paced during action sequences. 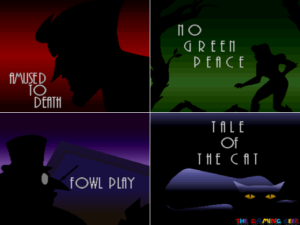 The game uses title cards before the beginning of each stage.

The game’s presentation is also top notch. I loved the title cards that you’d see at the start of each stage, before any cutscenes even played out. This is how episodes of the Animated Series began, so it really made me feel like I was experiencing an episode each time I played this game.

I loved The Adventures of Batman & Robin a lot. Whatever flaw I could find, there’s an answer for it. Yes, the game is very hard, but it’s got a password system and an Easy difficulty setting. There are only two Batmobile sections, and it’s only the first one that I really hate. Batman’s limited move set is enough to make the combat satisfying because the bosses were designed well.

If you’re a fan of Batman: The Animated Series, then you should definitely consider playing this game. Playing The Adventures of Batman & Robin is a great way to revisit the popular cartoon franchise. The same goes for fans of Batman or of superheroes in general. In my opinion, this game is the best superhero game that you can play on a 16-bit gaming console.