I’ve always wanted to do a run of the Super Star Wars trilogy of games on the Super Nintendo Entertainment System. I’m not as big of a fan of the Star Wars franchise now, but I’m still quite fond of it. And I’m still very fond of the original trilogy. Now that I’ve played most of the playable superhero based games of the eight and sixteen bit era, it’s a good opportunity for me to revisit other franchises that I enjoy. 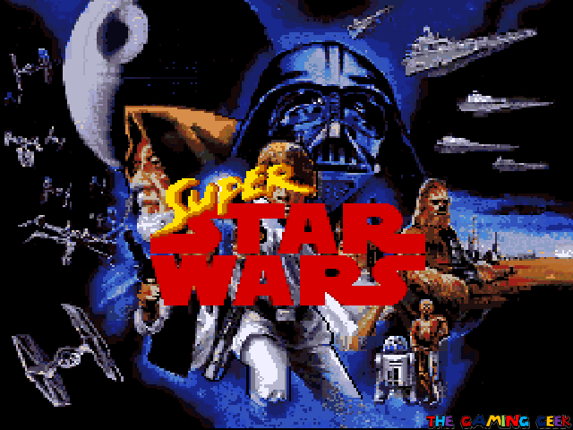 Today, let’s talk about the first game in this trilogy!

Super Star Wars is a run-and-gun shooter with heavy platforming influences that was developed by LucasArts and Sculptured Software and originally published by JVC. The game is based on Star Wars (or Episode IV: A New Hope to die-hards) and in effect is a video game adaptation of the events of that film. It doesn’t follow the film faithfully, but it does cover the same beats.

You mainly take on the role of Luke Skywalker but for more than half the game, you can also play as Han Solo or Chewbacca. For my playthroughs, I mostly played as Luke but I did try out the other two occasionally. Despite having several playable characters, the game is single player only. 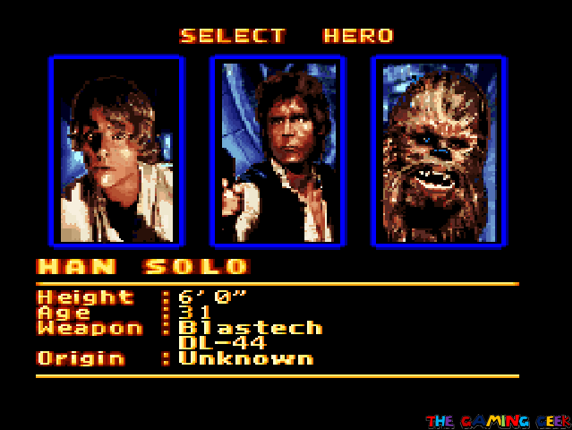 You start the game as Luke but can choose to play as Han or Chewie later on.

You have a health meter in this game, as well as a number of lives and continues. When the health meter is completely depleted, you lose a life. You’ve got a total of four starting lives (your current and three extra), and when you lose them all you’ll need to consume a continue, of which you have five. There are three different levels of difficulty that you can choose from: Easy, Brave, and Jedi. The game doesn’t have a password or save system, so you’ll need to beat it in one sitting.

In Super Star Wars, you can move your chosen hero via the D-Pad. Left and right makes them run in those directions. The B button makes your hero jump, and pressing Up as you jump results in a spinning high jump. Normally, you’ll make use of the spin jump more often since you can get farther with it. But there will be times when you should do a normal jump instead, like when there’s a low ceiling or if there’s a danger of jumping too far. 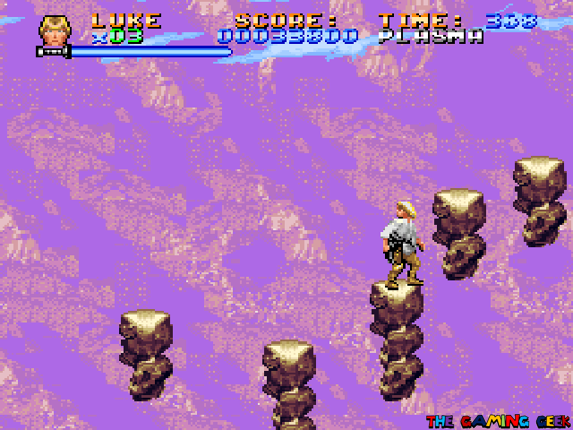 A combination of spin and normal jumps is best for these.

Pressing Down on the D-Pad will make your hero crouch.If you hold Left or Right while crouched and you press B, you’ll do a sliding/rolling move. You’ll need to slide past some obstacles and even some bosses. 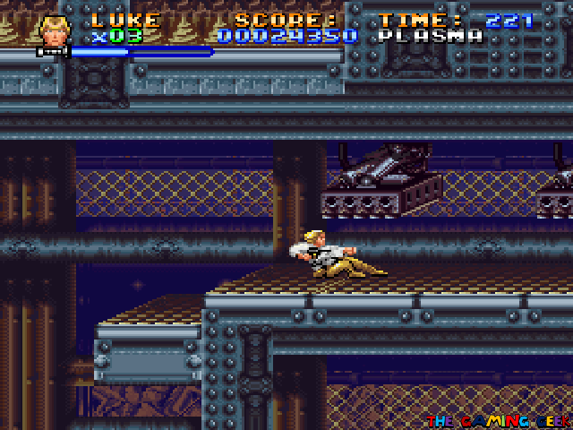 You’ll need to learn how this move works.

The L button pans the camera down, and the R button pans it up so you can see what’s below or above you. You’ll need to do this to see off-screen enemies and landing spots.

The main weapon in Super Star Wars is a laser blaster. The Y button makes you attack using your blaster and by default, you’ll shoot this straight forward. But pressing the D-Pad will allow you to aim your shot in seven directions (you can’t aim straight downward, even if you jump). Holding down the Y button will make you continuously fire your weapon. No need for turbo controllers here! 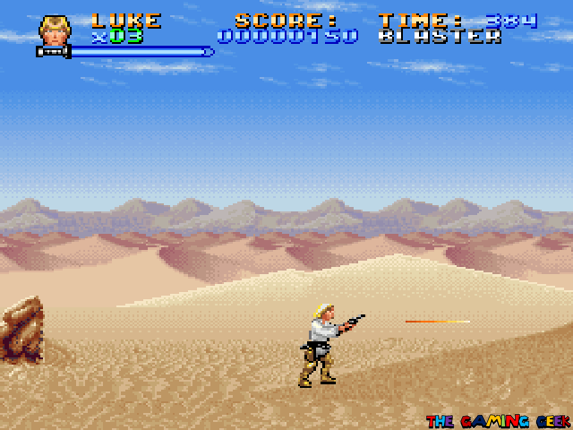 Your blaster can be powered up a level by obtaining special gun power ups throughout the game. From my experience, it seems like these are placed in fixed areas or dropped by predetermined enemies. You can power up your blaster up to four times (Plasma). 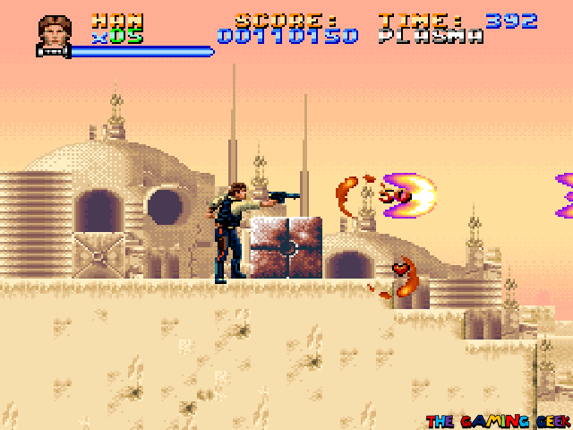 Luke will be given his father’s lightsaber later on, and pressing the A button switches between this and the gun. Attacking with the lightsaber is also done with the Y button. Luke does a sweeping, swinging motion but the saber’s hitbox isn’t as wide as the sprite shows. When standing, the hitbox is directly in front of you. 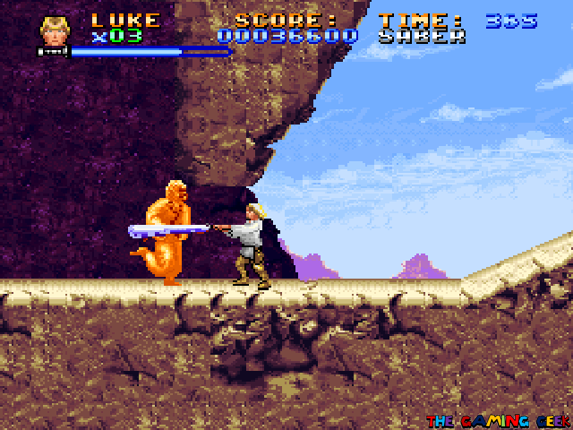 Attacking with the lightsaber. 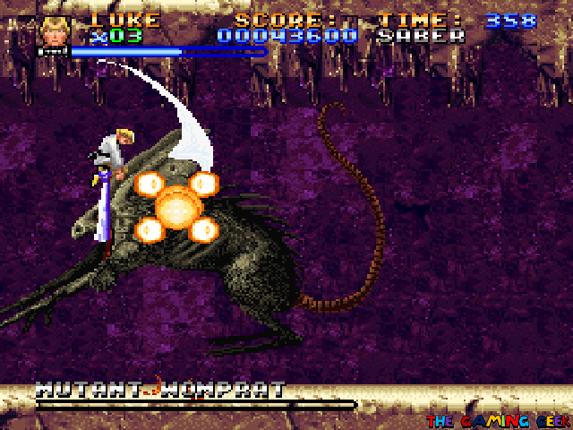 The spin attack is why I played as Luke for the majority of the game.

To balance things out, Han and Chewie always start out with their blaster upgraded by one level higher. Chewie has more health than the other two but moves slower, while Han has the fastest movement.

While Super Star Wars is a run-and-gun platformer, it does have some sections wherein you’ll need to pilot a vehicle. While on Tatooine, there are two landspeeder sections representing Luke travelling from one area to another. These sequences are from a third person behind the back perspective. In these sequences, you’ll need to defeat a certain number of Jawas before you can proceed. 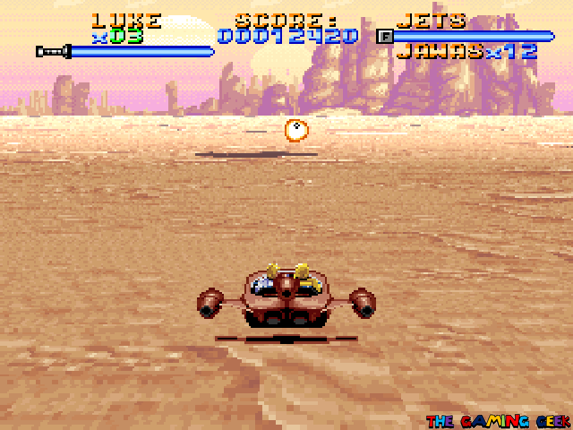 Cruisin’ on a landspeeder with C3PO riding shotgun.

Later on, you’ll have two X-Wing sequences representing the battle at the Death Star. The first sequence is similar to the landspeeder sections, with the perspective being behind the vehicle. You’ll need to destroy a certain number of TIE fighters and defense towers before you move to the final stage of the game. 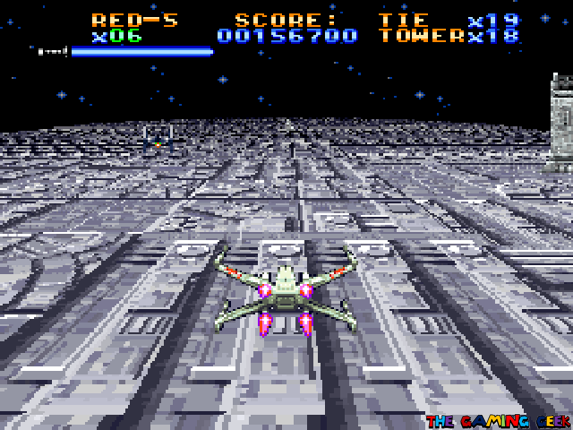 This could be an entire game in itself.

Of course, the final sequence of this game is when Luke Skywalker flies his X-Wing through one of the trenches of the Death Star. This sequence uses an in-cockpit perspective, and all you need to do is live long enough to get to the end of the trench. 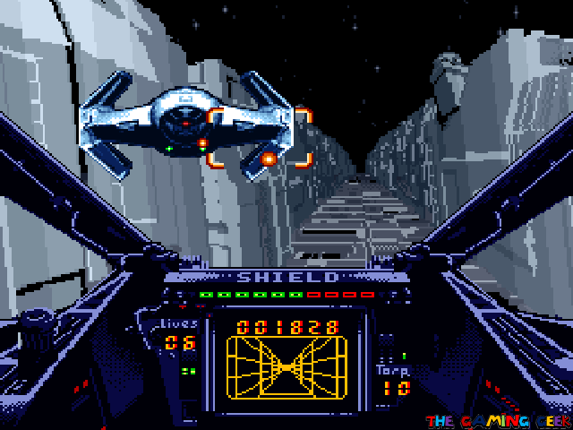 Beat this guy and shoot the Death Star down!

Which is easier said than done, because Darth Vader will appear and try to stop you. You’ll need to damage his fighter and send him out of there, just like in the film, before you can get a clear shot.

I hate to admit it, but I was a little disappointed in the boss fights of Super Star Wars. I understand that the film didn’t offer a lot of named bad guys to fight, and the heroes didn’t really fight Darth Vader in this film. At first glance, the bosses of this game are actually quite impressive visually. Monster bosses are all large and fearsome looking. 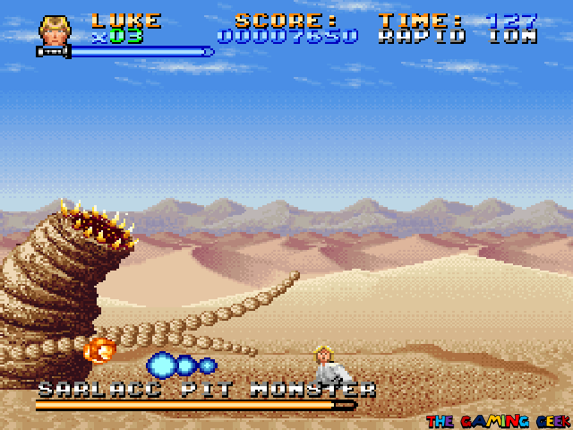 Whenever you’re fighting an Imperial Forces boss, it usually looks like it’s the meanest, baddest tech that they’ve got available. They all look impressive, but what’s disappointing is how they fight. These bosses are mostly one-note, with only one or two attack types that are easy to telegraph. Most of them don’t have any interesting vulnerabilities. 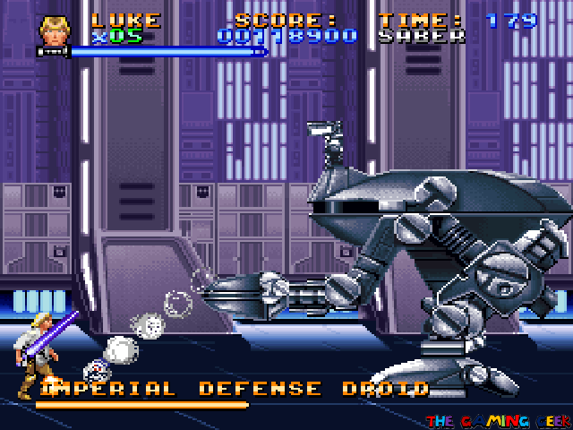 They don’t all have to be impressive. But I wish the latter bosses had something interesting to offer aside from their looks. In harder difficulties, these boss fights are tough because they hit hard, not because they’re hard to actually fight.

Super Star Wars is a well-polished game, in all aspects. This game’s sprites are some of the best you’ll see on the Super Nintendo. All the game’s characters are easily recognizable and are represented well in pixel format. The stages look really good too. Even if several of the game’s early levels all take place on Tatooine, they all manage to look different from each other. And I haven’t even mentioned the vehicle stages yet. The X-Wing sequence in particular could have been an entire game in itself, if they developed a good number of stages. 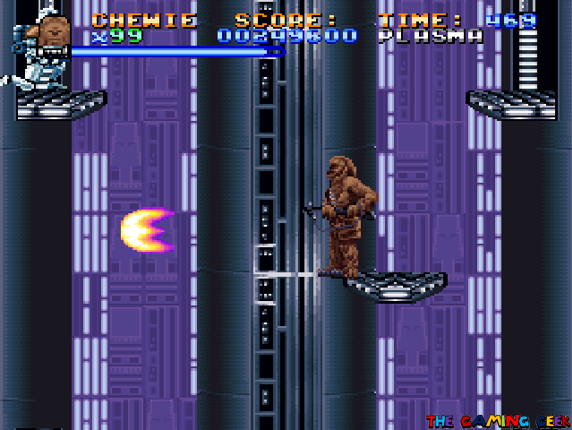 Chewbacca makes his trademark growls every now and then when you play as him.

The same can be said about this game’s music. Well, it uses a lot of the themes that the film uses, so of course you can expect excellent stage tracks. Most of the sound effects are also from the film, like laser blasts. When you choose Chewie, he’ll growl occasionally like he does in the films. And sometimes, a voice clip of Obi-Wan saying “Use the Force, Luke” will play. 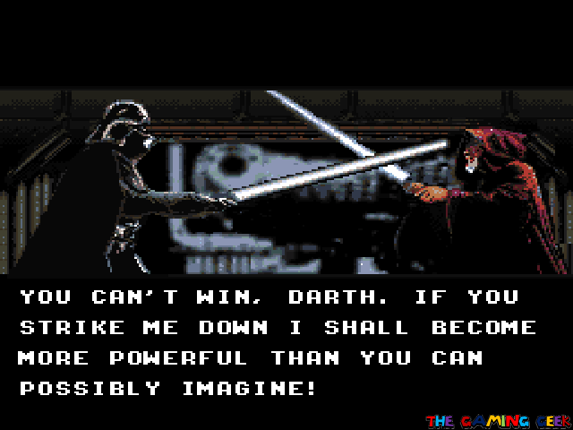 The game uses a lot of these iconic still images for cutscenes.

As for presentation, this game does a lot of things right, starting with Star Wars iconography. The health meter is in the form of a lightsaber. There’s a power up that’s in the form of Darth Vader’s head. And some of the characters actually had sprites even if they weren’t playable, like Obi-Wan and R2D2. More importantly, this game has a lot of cutscenes that fill in the blanks in the story that the gameplay couldn’t. These make use of still image recreations of various scenes from the movie. They even recreated the opening introduction crawl that all of the Star War films have.

If we look at Super Star Wars as a video game, then it’s simply an above average game with solid mechanics and decent level design. But when looking at a licensed game like this, we need to look at how well it represents the license it uses. So, does Super Star Wars provide a good Star Wars experience?

Yes, in my opinion, it does! Our main heroes did fight in the film using laser guns, so it feels right for this game to be a run-and-gun. And Luke having his lightsaber is awesome. While this isn’t a one-for-one representation of the film, this game follows the same storyline beats. Including music and images from the movie just makes this game even more immersive. So when I played, I felt like I was actively re-enacting the movie’s events. 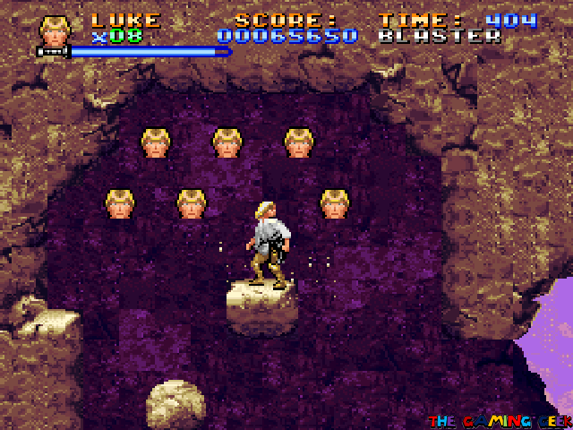 Get as many as 99 lives in this secret area!

This game can be really difficult, but having the Easy difficulty option makes it accessible to a lot of players. So aside from a lackluster boss design, there’s really nothing else that I can complain about. Super Star Wars is one of the best Star Wars games out there, and it is a must for any Star Wars fan who enjoys playing video games to try this game out.