Spider-Man and the X-Men in Arcade’s Revenge is a video game that did one of the things that really make comic books fun – crossovers! And this game involves two of Marvel’s most popular franchises in both Spider-Man and the X-Men. I also saw a lot of ads about this in comic books when I was a kid. I had the chance to play the Super Nintendo version recently, so let’s talk about it!

Arcade’s Revenge is an action platformer developed by Software Creations and published by LJN under Acclaim Entertainment. The game features Spider-Man, along with four of the most popular X-Men members: Cyclops, Gambit, Storm, and Wolverine. The premise of the crossover is quite simple: Spider-Man witnesses each of the X-Men get abducted, so he is trying to rescue them. He goes in pursuit of some of the kidnappers and finds himself in Arcade’s Murderworld. Together with the X-Men, he now has to participate in Arcade’s games of survival.

The first stage of Arcade’s Revenge won’t prepare you for how difficult the game really is.

After an introductory level where you play as Spider-Man, you are allowed to choose from any of the five playable characters. Each character can walk, jump, and crouch. They have their own set of attacks and special abilities. However, each character has his/her own pair of stages they need to get through. In order to beat this game, you have to play every character and beat all of their stages. 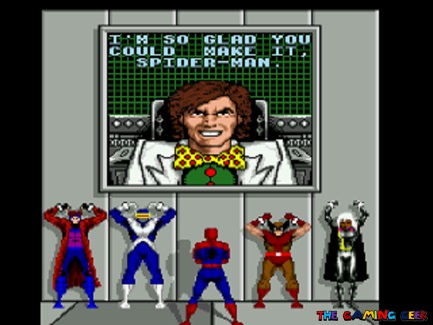 Can Spider-Man and the X-Men survive Arcade’s death traps?

This is keeping in theme with the Arcade character, so I understand this design choice. Each pair of levels was designed around a certain theme, so my experience with this game varied depending on the character I was playing. Let’s discuss each in more detail.

Out of the five playable characters, Storm has the most unique stages. Instead of a platforming level, Storm spends much of her time swimming in water. Her stages feel like you’re playing an Ecco the Dolphin game, where you explore tight corridors by swimming in all directions, mostly to the left and right. Unlike Ecco, Storm constantly floats upward but this makes thematic sense.

Storm spends majority of the game swimming in water.

In these levels, you need to manage Storm’s oxygen levels, which is represented by replacing the health bar with a bubble meter. Staying underwater too long depletes this meter. Getting hit by enemies or hazards also depletes the bubble meter. Touching the surface of the water replenishes this, as well as giant clams that blow out air bubbles. Aside from swim, Storm can throw out lightning bolts as her regular attack, or a small tornado as her special attack.

Despite needing to suspend my disbelief to accept the logic of shooting bolts of ELECTRICITY IN WATER, I liked Storm’s stages the most. Aside from being unique in the game, her stages offered fair challenges that didn’t make me want to break my controllers in half. I acknowledge that the levels don’t make good use of the character’s abilities. But I’m playing the thematic card here. It makes sense for Arcade to put Storm in a situation that she can’t maximize her weather control powers.

Before we discuss his levels, let me talk about Gambit first. He can only attack via his throwing cards, which he can shoot upwards or arcing forwards. He can use a special attack but you can only do that a limited number of times. Gambit has a card meter, and each attack depletes this meter. If the meter runs out completely, Gambit can no longer attack. He can’t kick, throw a punch, or use his staff. Throughout his levels, you can reload the card meter via power ups. Enemies also leave behind cards so you could refill the meter by killing them.

Gambit has to deal with the hardest levels, in my opinion.

But his levels add a layer of complexity to the situation. There are a lot of things that make both levels utterly frustrating. The first one has a big steel ball at his tail and if it catches up to him, he’s dead. The second stage scrolls up vertically, and if Gambit gets caught between the moving platform and a wall, a ceiling, or an object, he’s dead. So you have to deal with ammo management, you are also under constant time pressure.

Littered around both stages are these yellow blocks that you need to throw cards at in order to pass, and they can be really hard to hit because of the arc of Gambit’s horizontal toss. The first stage has a lot of pits that you can fall into if you miss your jumps. The second stage often makes you choose between different paths, with some leading to dead ends. Make the wrong choice and it’s guaranteed death and back to the start of the level. Both stages have an end level boss too, so you need to make sure you have enough health and cards to get through both fights.

The Rest of the Stages

Everyone else has your standard platforming experience. Cyclops’ levels are in what looks like a mine. You need to ride an on-rails cart every now and then in both his levels. I didn’t time these exactly but it felt like his levels were the longest ones. Unlike the other characters, Cyclops CAN punch and kick, as well as use his optic blasts. He’ll need his melee moves for Moloids who are immune to Cyclops’ blasts.

Cyclops has the most generic levels in the game.

Spider-Man’s levels are on city rooftops with unfinished buildings. He attacks by shooting webs and can’t kick or punch at all, but he does a web swing that surprisingly has an attack hitbox. He can also crawl up walls. His levels are designed around his wall crawling and web swinging, requiring you to do a lot of both.

His second stage can also be quite frustrating as most of the level does not have a floor. If you miss a web line, you could immediately die. In the middle of the second stage, it starts to rain and wind starts to blow. The direction of the rain indicates where the wind is blowing to. This impacts your jumping and web swinging, so you need to adjust to this or even use it to your advantage.

Wolverine goes from fighting killer toy robots to being chased by the Juggernaut.

Finally, we have Wolverine, who can have his claws out for more damage or retract them but be able to regenerate health. He can punch straight or do a stronger uppercut that has shorter reach. His first level has a toy land theme and is also a standard platforming level. His second stage is like one of Gambit’s; the Juggernaut is chasing after him the entire time. Wolverine needs to keep attacking the big guy to slow him down and whittle down his health, while constantly moving forward to avoid getting caught. Don’t do enough damage and you’re guaranteed to lose a life at the end.

Visually, Arcade’s Revenge is quite underwhelming. Stages are colorful and sprites are recognizable, but they don’t look as good as other games released on the same platform. The sprites in this game are just a little better than what Batman on NES had. The levels are okay, they could look better but they do look like the environments they are depicting. Despite having only two, I always enjoy it when a game based on comic book characters uses comic book panels in cutscenes. 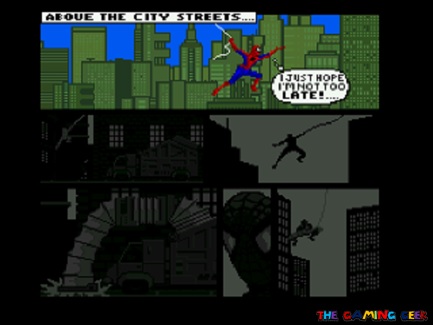 Spidey wants to rescue the X-Men!

In terms of sound, oh boy. I hate this game’s sound effects. Explosions are loud and don’t sound like explosions, they sound like metal pots and pans falling to the floor. The shriek that each character gives out when they die is unnerving and doesn’t fit the characters. The sound effect for Spider-Man’s spider sense is annoying.

The game’s music is actually enjoyable but I don’t think they fit the game at all. The title screen opens with an electric guitar riff that fools you into believing you’re up for some rocking tunes, but what comes after is all jazz and brass instruments. They’re not bad, they just feel out of place. Sometimes, they just fade out without any relation to what’s happening in the game, only to start back up again.

Arcade’s Revenge was an ambitious idea, but the combination of frustratingly unfair difficulty, lackluster graphics and simple gameplay mechanics work against it. I really loved the concept of having each character face their own specific challenges but the execution just wasn’t good enough. The developers could have done more given that they were creating a game for a 16-bit console.

Spider-Man and the X-Men in Arcade’s Revenge isn’t a bad game, but it isn’t that good either. There is some enjoyment to be found in this game, but the negatives outweigh the positives. If you want to play a superhero themed game on the Super Nintendo, there are better ones to spend your time on.