Justice League Task Force had versions released on Sega Genesis and Super Nintendo. In this post, I’ll be talking about the latter edition. 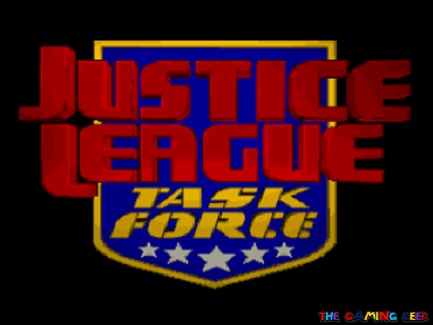 Title screen for Justice League Task Force on the SNES.

Justice League Task Force is a fighting game based on DC superheroes. The SNES version was developed by Blizzard Entertainment, produced by Sunsoft, and distributed by Acclaim. The plot of the game’s Story mode centers on Darkseid declaring war on Earth. You can choose from six popular Justice League members: Superman, Batman, Wonder Woman, the Flash, Aquaman, and Green Arrow. Your chosen hero will attempt to team up with the rest of the superheroes, but each one he/she encounters has been replaced with a robotic replica. You end up fighting replicas of the rest of the League in a series of one on one battles. 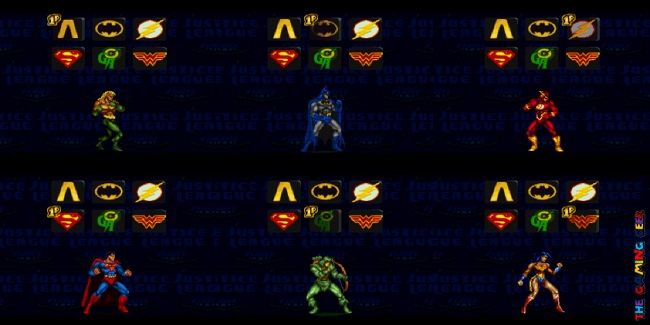 You can play as one of the most powerful Justice League members and Green Arrow.

The fighting system used in this game closely mirrors the one popularized by the Street Fighter series. Battles are determined via best of three matches. Each character has a light, medium, and heavy punch and kick attack. Blocking is done by holding back, you jump by pressing up, and you crouch by pressing down. 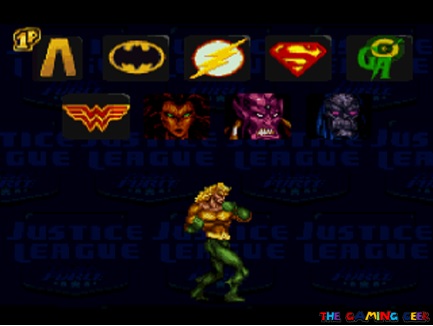 You can also play as villains in Battle and Versus mode.

The game also has a Battle Mode which is the same as Story Mode, except that it doesn’t have the story dialogues and you can choose to play as one of the three villain characters that are part of the roster. Finally, there is a Versus Mode where you can battle your friends using all of the nine fighters in the game.

The Roster of Playable Heroes and Villains

There are plenty of Justice League characters that could have been included in this game. This game could have included a Green Lantern, either Hal Jordan, Guy Gardner, or John Stewart. Where’s Martian Manhunter? Black Canary? Hawkman or Hawkgirl?

Martian Manhunter or Green Lantern would have fit better than Green Arrow in this game’s roster of fighters.

Speaking of Green Lantern, I think one of them would have been a better fit in this game instead of Green Arrow. I don’t want to hate on Oliver Queen but it’s weird to see him defeating Superman or Wonder Woman in straight up combat. I feel that Hal Jordan should have taken his place. Aside from fit, Green Arrow’s move set was quite limited to his trick arrows. A Green Lantern fighter could have had a better variety of special moves.

In addition, I’m curious as to why Cheetah was chosen for this game. They could have used Deathstroke, Amazo, Solomon Grundy, and Bizarro here. Or they could have been added to this game to strengthen it’s roster.

Despite these complaints, I like this roster a lot. We’ve got five of DC’s “Magnificent Seven” represented. Darkseid definitely needed to be this game’s main bad guy. It’s just funny to see Superman sporting a mullet. I know why, but it’s funny nonetheless.

The Heroes as Fighting Game Characters

While I don’t think all the characters were represented perfectly in this game, I think the developers did a good job in how each character was depicted. All of Superman’s attacks here involve punching, which is consistent with what I always see when he is depicted elsewhere. He’s got heat vision, ice breath, and a charging punch. He can also fly in this game too.

The Flash can throw a flurry of punches and launch small tornadoes. He has a dash that flows into a jumping uppercut. He can use his superspeed to teleport behind his opponent. Green Arrow can shoot fire arrows, ice arrows, and bomb arrows.

Batman uses his Batarangs as projectiles. He uses his grappling hook to launch a special dropping heel kick attack. His two other special attacks are really just different versions of flying kicks.

Wonder Woman uses her lasso to reel in opponents and does a two-kick combination. She uses her bracelets to deflect any projectile back to her opponent. She can also fly like Superman, allowing her to drop in with powerful attacks from the air.

Of all the heroes in the game, I’m most disappointed in how Aquaman was depicted. He can shoot out a water blast. The rest of his special attacks don’t really reflect his powers. He has a sliding kick with really good range, a lunging attack that goes over projectiles, and a spinning backhand attack similar to Street Fighter’s Cammy. The Genesis version has Aquaman use his trident; I think that would have been a good addition to this version’s move set.

I didn’t spend a lot of time using the villains in this game, but based on fighting them I think they were also well-represented. Despero can shoot a psionic blast, or charge in with a shoulder tackle that utilizes his strength. Cheetah attacks with charging claw slashes at blinding speed. And Darkseid has several different melee attacks, as well as his Omega Beams as projectile attacks.

My other issue with Justice League Task Force involves the controls. I hated playing Street Fighter II on SNES because the controller only had four face buttons, so I had to assign attacks to the shoulder buttons. That control scheme just doesn’t work for me in fighting games, I end up ignoring the shoulder buttons completely. I did the same with this game, so I’m wondering if they really needed to have six different attacks or if they could have reduced it to just four. 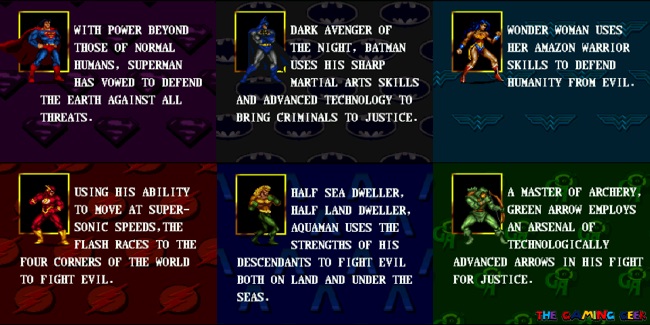 If you didn’t already know them, the game will tell you a little about each featured Justice League member.

Also, it’s easier for me to execute quarter circle moves. I ended up preferring Wonder Woman and Green Arrow, because they didn’t have half circle moves. I wonder why they didn’t use the same special move execution for all fighters, since there wasn’t much variety anyway already. At least the developers didn’t use “charge” moves – I hate doing those types of moves.

It doesn’t help that the game’s AI is programmed to be really aggressive. The difficulty has five levels, with the third level as default. On the default difficulty, the AI can pull off several special moves in succession. It also blocks really well, with great timing. I even had a hard time with the second level. Eventually, I figured out the tendencies of the AI and I can manage to defeat the default difficulty opponents with reasonable effort. I still wouldn’t want to use characters that have half circle moves though.

The graphics in this game are really good. The sprites are large and have great detail. They seem to lack a few animation frames though so moves look a little stiff. Each character has his/her own stage and aside from looking great, most of them make sense for the character. Batman fights among the Gotham rooftops. Superman is fighting on top of the Daily Planet in Metropolis. Wonder Woman is fighting in what looks like a palace courtyard. The only stage that didn’t fit well with the character was the one they used for the Flash. It looked like a random highway in the middle of a desert, complete with vultures. 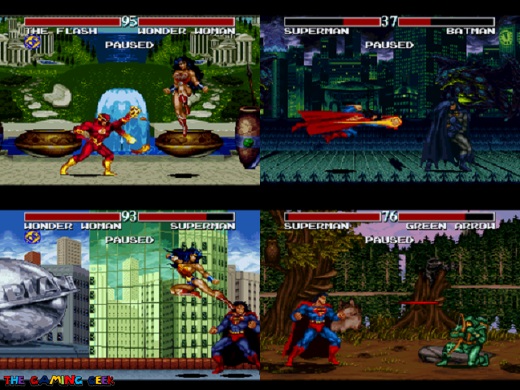 This game looks great for a 16-bit title.

The sounds are for the most part really well done. When attacks land, they come with crisp and loud thuds. They did reuse the grunt sound effect for several characters. What stands out are the stage themes. Each one is apt for the location and the character. Batman’s stage music has a pipe organ feel that’s very dark and brooding. Green Arrow’s stage has no stage music and instead has various animal sounds. Aquaman’s stage has a theme that is quite serene at the beginning but slowly builds, with tribal drums and percussions against the sound of flowing water. Superman’s stage has a theme that reminds you of the classic John Williams theme without actually using it.

No matter who you choose, they all say the same exact thing in Story Mode.

I do have one complaint regarding the presentation. In Story Mode, each character has a monologue before each fight. This is the same whoever you choose. It would have been more immersive if each character had different lines. Adding other villains to the roster could mean that each character could be facing a different villain just before Darkseid. Currently, everyone fights Cheetah at the end. Maybe The Flash and Wonder Woman has Cheetah as their boss fight. Batman and Green Arrow could be fighting Deathstroke. And Superman and Aquaman could be fighting Solomon Grundy.

I really liked Justice League Task Force. Not as a fighting game, but as a game wherein DC superheroes beat the crap out of each other. That’s because I like superheroes and I like these characters. If I wanted to play a good fighting game, this is decent but I can’t imagine playing this instead of Super Street Fighter II or Mortal Kombat with my friends.

If you want to play a fighting game with superheroes in a classic visual style, try this one out. Otherwise, you may be better off trying out Mortal Kombat vs DC Universe or Injustice: Gods Among Us instead. Those games have more DC characters in their roster so you’ll have more to choose from.