I’ve known about the Super Famicom version of Clock Tower since I’ve become interested in horror games. But I never found a good reason to play it, until recently. The game was only released in Japan, but an English fan translation was released in 2001. Since I don’t read or understand Japanese, I played the fan translation. 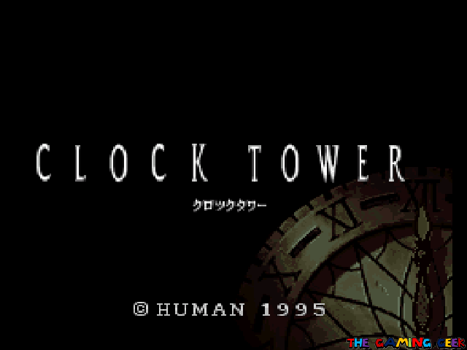 Title screen for Clock Tower on the Super Famicom.

Let’s talk about one of the earliest horror games to ever be produced.

Clock Tower is a point and click game that was developed and published by Human Entertainment for the Super Famicom. This is the first game in the franchise. But in case you’re remembering Clock Tower for the PlayStation 1, that’s actually the sequel to this game (that was released as Clock Tower 2 in Japan). In this game, you take on the role of Jennifer Simpson, who was among four young girls that were recently adopted by Mr. Barrows. 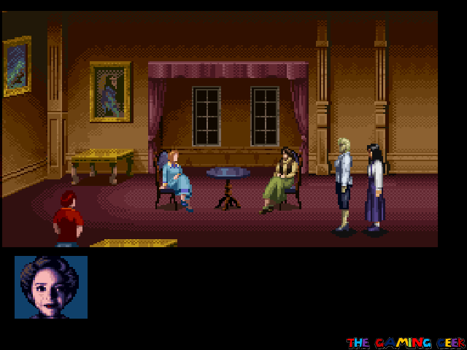 The game starts with the four girls being accompanied to their new home by Mary, whose identity isn’t clear in the introduction. Mary will excuse herself, saying that she’ll get Mr. Barrows. When she doesn’t return, Jennifer decides to go look for her. Not long after setting off, Jennifer hears a scream. All three of her friends are now missing, and it’s up to her to find out what happened to them. 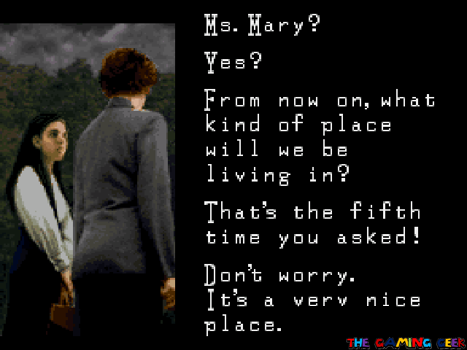 The orphans are escorted to their new home by Mary.

Because this is a point and click game, the mechanics are a little different. Jennifer has health, which is indicated by her portrait’s background color. Blue means full, and red means near death. She’s only got one life, so death means game over. There are no health refills nor extra lives in the game. However, the game has a save system. This is actually an auto save (usually at the last door that you entered) so you essentially have unlimited continues.

The game has a couple of branching paths and multiple endings, some good and some bad. The endings are determined by your actions in the game. From my experience, you’ll need to play this game multiple times in order to piece together the actual story.

In Clock Tower, the D-Pad moves a cursor across the screen. To move Jennifer, you need to “click” the cursor to her left or right by pressing the Y button. Tapping the Y button twice will make Jennifer run toward that direction. In case you quickly need to run, you can also use the shoulder buttons. The L button will make Jennifer run to the left, and the R button to the right. Press the X button to stop Jennifer from walking or running. 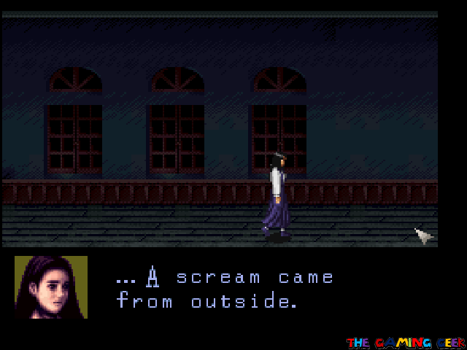 You move Jennifer by “clicking” the cursor.

You can also interact with objects in the house. The cursor will change from an arrow to a box when you’re hovering over a spot that you can interact with. You’re not limited to objects on the “platform” that Jennifer is walking along. She’ll go into the background as needed. 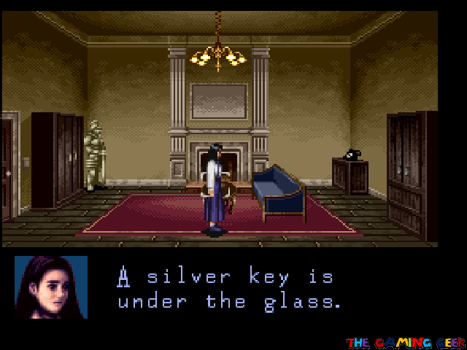 The cursor changes into a box on noteworthy spots.

Your progress will be determined on whether you interact with the right objects in the house. It’s best to go over every spot in every screen, whenever you enter a new room.

You can sometimes find items when interacting with objects and backgrounds in Clock Tower. Some of these are keys which will automatically unlock certain doors or areas in the game, so you won’t need to do anything extra with them. 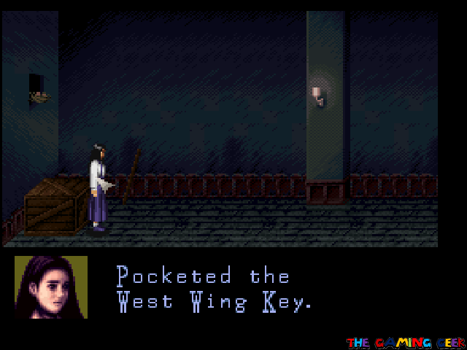 House keys won’t go into your inventory and will automatically be used.

Most of the items that you’ll find will go into your inventory. Pressing the A button will bring up the inventory/item menu. You’ll see all the items that you have currently. While on this view, pressing the D-Pad will move the highlight over to the items. You can also go back to the cursor via this menu. 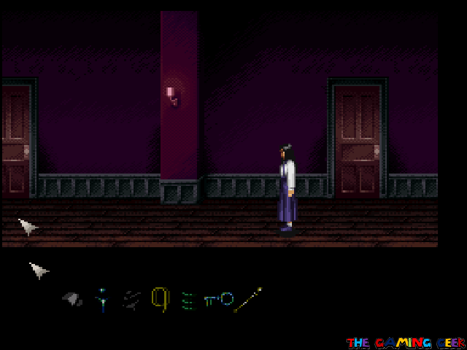 Always check on what items you have.

Your selected item will replace the cursor. Moving that over to areas in the background will attempt to “use” the item. Nothing will happen if that item wasn’t meant for it, so feel free to try out items if you get stuck. 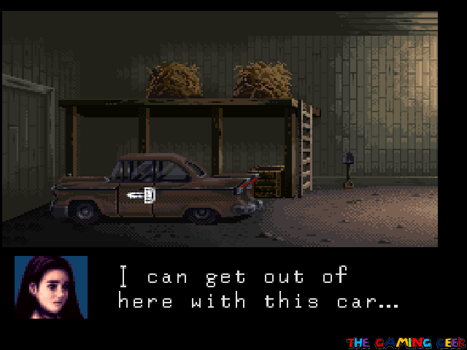 Some items will work on objects in the background.

All of the items that you’ll find will have a purpose in the game, so always take a look at your inventory every time you enter a new room. Look at all the details in that room and see if there is anything that is related to the items that you have.

As mentioned earlier, Clock Tower does have a health meter, which is represented by the background color of Jennifer’s portrait. She loses health gradually while running. To refill her health, you’ll need to wait for her to sit down, which she’ll do after being idle for a few moments. The fastest way that I found to trigger this is to make her walk a few steps, then have her stop. 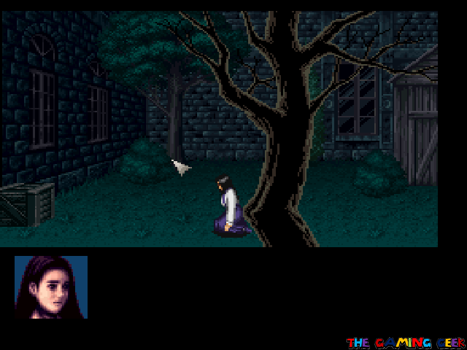 Sitting down will regenerate your health.

Even though this isn’t an action game, Clock Tower does have it’s share of dangers, so you’ll need to keep your health up. There are Panic events in the game, which will instantly kill you if your health is too low. If your health is high enough, you will go into a struggle and you’ll need to tap the B button really fast. I won’t share screenshots to avoid spoilers.

I will say this though. You need to react quickly to Panic events. The game won’t give you a lot of time so if you’re a little too slow, these Panic events will kill you.

Looking at Clock Tower from the context of what it’s trying to do, it looks amazing. The 16-bit graphics did well to help my immersion in the game. Sprites are well-animated and have good enough detail. Areas did look repetitive, but that’s how a real house looks like. 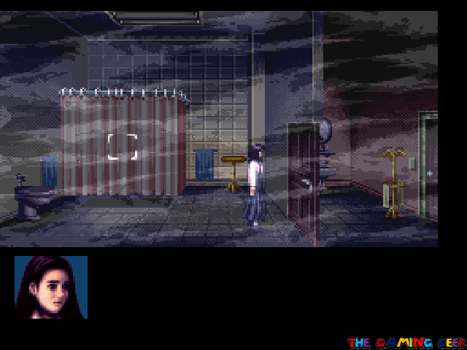 Will you dare open that shower curtain?

I love the music of the game as well. Most of the time, there is complete silence. This helps drive the feeling of isolation home. And it helps make intense moments feel more intense, too. That’s when the game’s theme is playing, and it’s a really good horror theme.

In terms of presentation, this game also does a good job. Although I do think that a few more pictures and cutscenes could have helped tell this game’s story more effectively.

I like Clock Tower a lot, especially for what it is. It’s a 16-bit horror game, and there’s not a lot of games like this so it’s easy to stand out. But I do think that this game is a little too short. Jennifer’s slow walk speed and health regeneration speed will pad your gameplay time a lot. A lot of your time will also go to figuring out the game’s puzzles. But once you know what to do, getting to an ending won’t even require an hour.

I think I would have liked this game a lot more if the house had a few more rooms to explore, and a few more puzzles to solve. The developers cut an entire section of the second floor that could have been used for this. The game isn’t terribly short especially on your first few runs but it definitely could have been longer.

The biggest problem about Clock Tower has to do with what came after it. In the following generation, we started to see games like Resident Evil and Silent Hill, games that truly pushed the boundaries of what a horror game can do. While this game holds up on a presentation aspect, it does pale in comparison when it comes to the scare factor.

But within the game, there’s a really good story that’s hidden. You’ll need to play the game a few times to fully unlock it. I did like the story a lot. Actually, I like this game a lot too. I never thought a 16-bit game can make me feel uneasy, but this game did it.

If you’re looking for a scary game to play, you might get disappointed with Clock Tower because it’s not as scary as other horror games. But this game is still worth a look, because it shows what kind of horror games could have been made during the 16-bit era. And the game’s story is definitely worth the time that you’ll spend to unlock it.

If you want to see more of Clock Tower, click here for a playlist of gameplay videos on my YouTube channel! You can also click here to check out every Super NES video game that I’ve played.