I’ve always known the negative reception that Castlevania: Dracula X received upon it’s release. Even as the years went by, perception never really softened. People still saw this as a watered-down version of Rondo of Blood. Which is precisely why I made sure that I played this game before even touched the latter. Is Dracula X really as bad as people say it is? 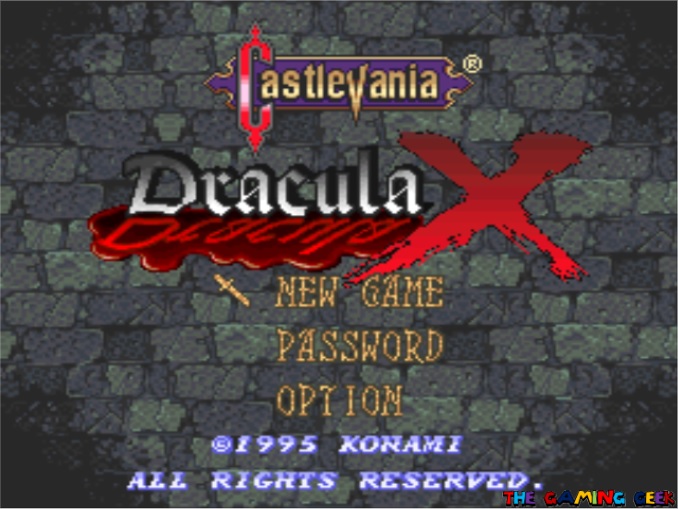 Castlevania: Dracula X is an action platformer that was developed and published by Konami for the Super Nintendo Entertainment System. This gets compared to Rondo of Blood a lot because it reuses assets and shares characters and the general plot as the latter. In this game, Dracula is back in existence and has exacted his revenge against Richter Belmont, Simon’s descendant, by kidnapping his beloved Annet and her sister Maria. Richter must now set out to defeat Dracula and attempt to rescue both Annet and Maria. 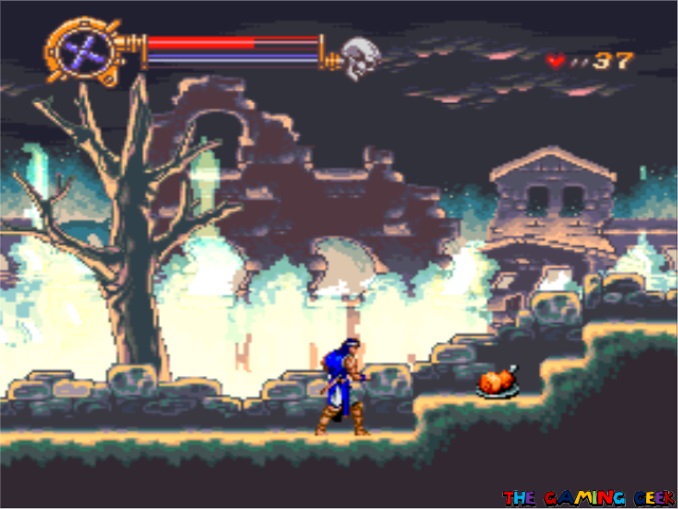 Try whipping steps or walls – they might be hiding precious pieces of meat that will give you some health.

Like most action platformers and other Castlevania games, you have a health meter in Dracula X, as well as a number of lives. You lose a life when your health meter is completely depleted. You can find pieces of meat occasionally, usually hidden in walls or floors that can be destroyed. These will fill up your health meter. 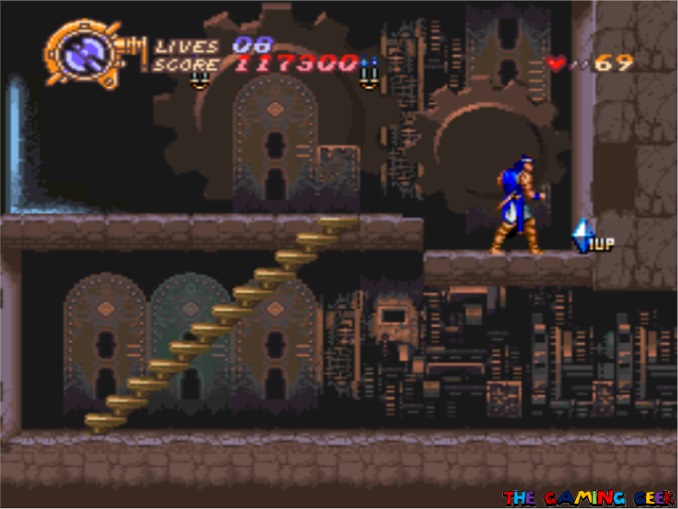 You’ll begin each playthrough with three lives. If you run out, it’s game over, but the game will give you unlimited continues. You can gain additional lives if your score hits specific thresholds or when you find extra life power ups. This game also has a password system, which will allow you to save your progress. However, continuing from a password will reset your lives count to three.

In Dracula X, Richter has essentially the same abilities as the other Belmonts in prior Castlevania games. He can walk, crouch, and jump. He attacks using a whip called the Vampire Killer, and has a few different types of sub-weapons at his disposal. A few things are different in this game though. First, you no longer have to find power ups to upgrade the Vampire Killer. It’ll always be in its full strength chain incarnation. 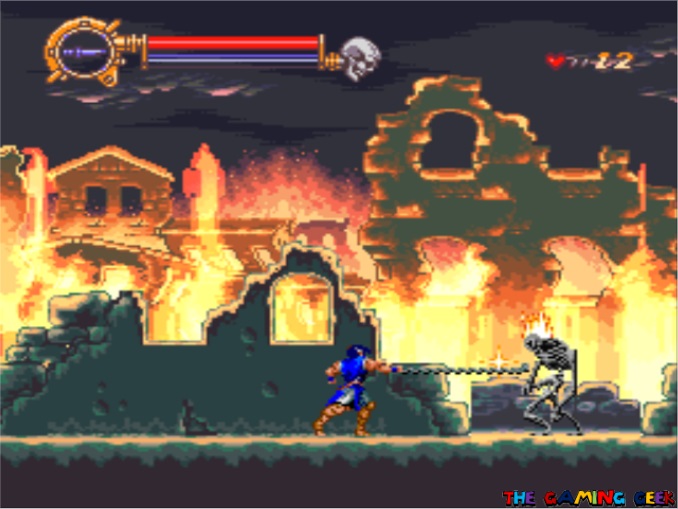 Richter’s jump doesn’t have a fixed trajectory like the previous Belmonts. Here, you can influence his jump distance with the D-Pad. He’s also got a nifty backflip that can help you reach platforms that you normally can’t reach with a normal jump. But the most important new ability that he has in this game is the ability to jump on and off stairs. In previous Castlevania games, you could only use stairs by “entering” them from either of the two ends. If you were in the middle of a staircase and were attacked, you’d be a sitting duck. Now, you can jump off of them any time. And you can even jump on them, just hold Up before you land to make sure that you stick. 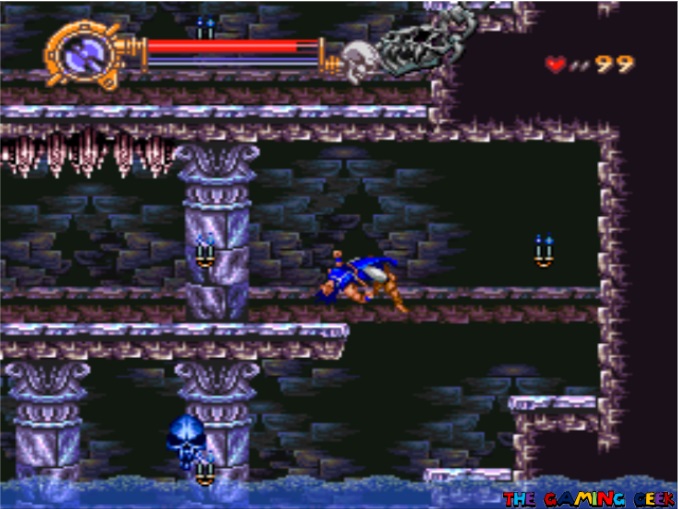 The backflip can be useful, but isn’t a game-changing new ability.

Finally, Richter can do what the game calls “Item Crash”, which is essentially a super move that involves the sub-weapons. Each sub-weapon has it’s own Item Crash, some are just handy while some are really useful.

Dracula X still follows the traditional Castlevania template of game design, so the famous Belmont sub-weapons make their return. Using sub-weapons will consume Hearts, with each consuming a different amount. The first one you’ll encounter is the Knife, which is thrown straight forward. Here, Richter throws three knives instead of one. They all still fly straight, but have a bit of spread to them so you have more room for error. 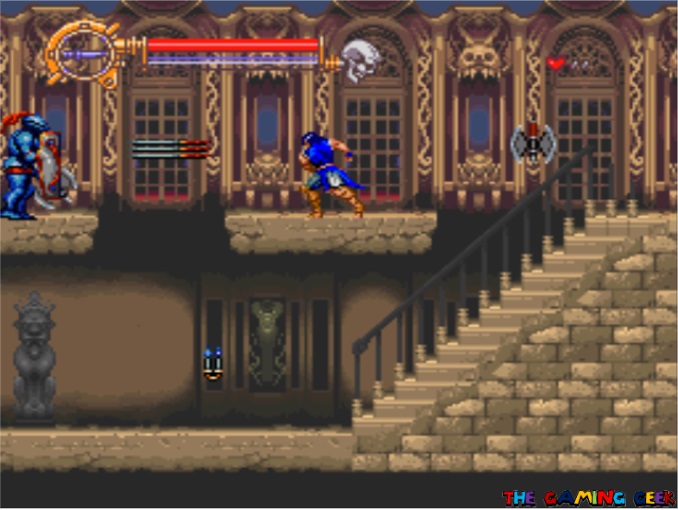 The Knives are the weakest among the sub-weapons.

The Cross Boomerang appears to be unchanged. It still flies straight forward, but returns to you after travelling a short distance. This can hit enemies twice if you time your toss correctly. 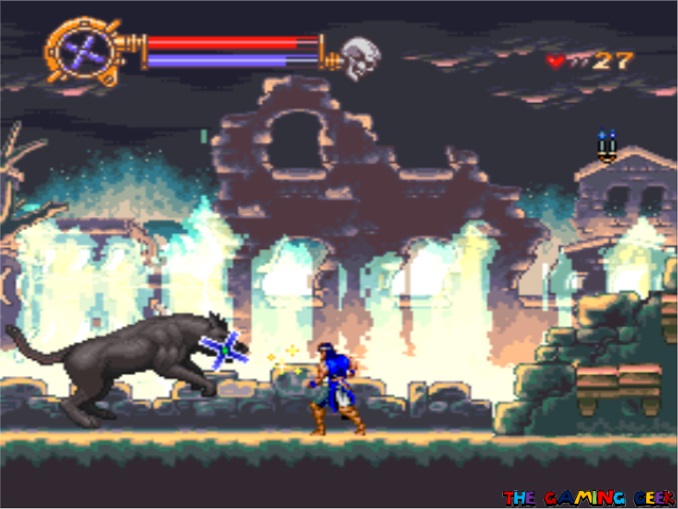 The Cross Boomerang used to be my favorite sub-weapon.

The Holy Water received an important update. It still goes downward and spawns holy flames when it hits. But in this game, its holy flames travel a short distance forward before dissipating. This makes it handy against enemies that can block projectiles. 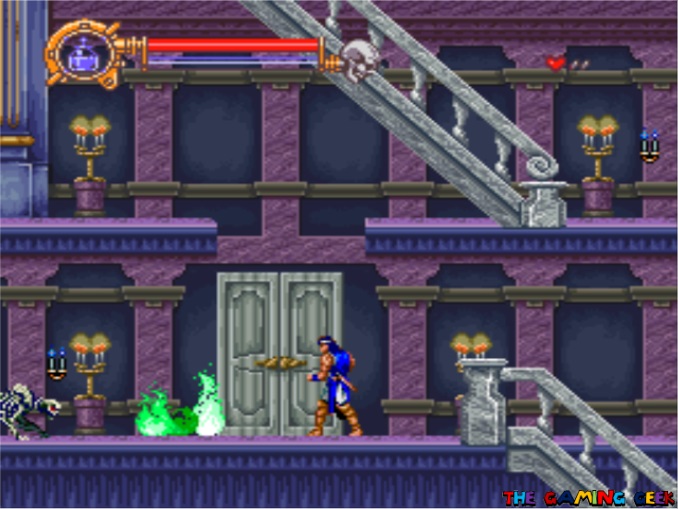 The Holy Water is a lot more useful now.

I never even got to use the Stop Watch, because I didn’t see any good use for it’s ability to temporarily freeze enemies. The sub-weapon I frequently used is the Axe. The way it arcs from upwards to downwards is just really versatile. With proper spacing and timing, you can hit almost any enemy with it. 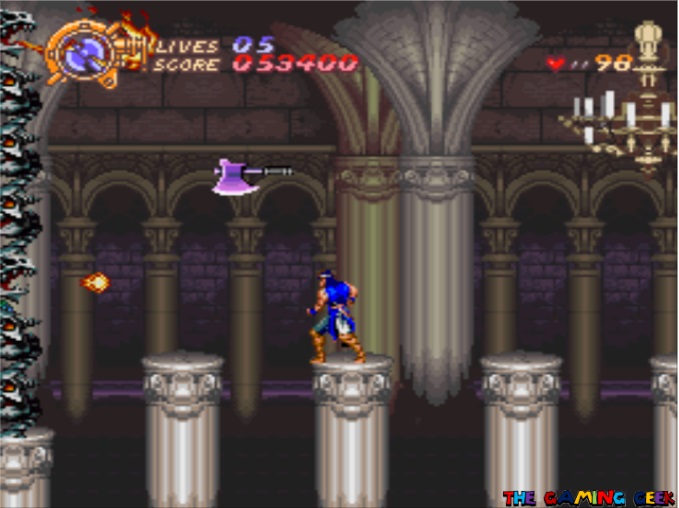 The Axe is still the go-to sub-weapon of this game.

The Axe is also tied with the Holy Water and Cross Boomerang in terms of having the best Item Crash move. All three are screen clearing attacks that provide Richter some invincibility frames. 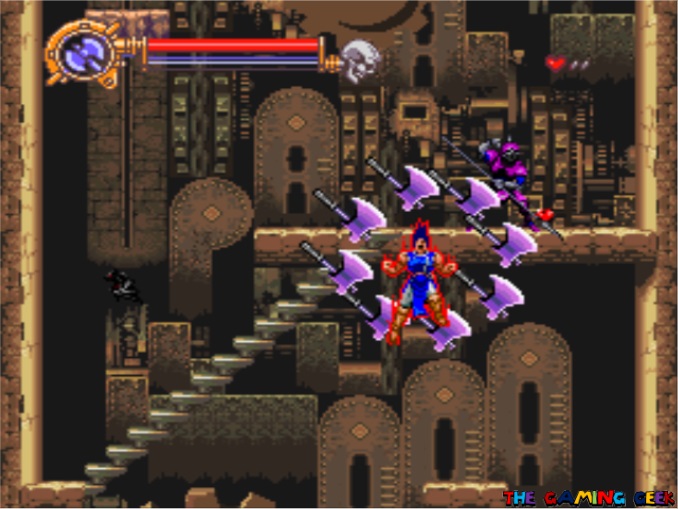 While there aren’t any new sub-weapons, the less-useful ones have been upgraded to make them viable options over the popular ones.

While not as many as what Castlevania III: Dracula’s Curse offered, Dracula X still has an alternate path that you can take. Richter’s mission to rescue Annet and Maria is represented in the game’s design via a secret path that you’ll be able to access by performing some key actions. The first one involves getting the Key. 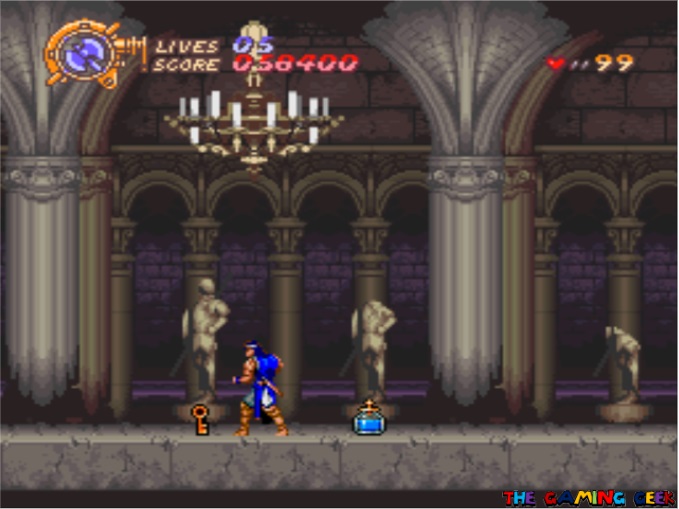 You’ll need the Key in order to see the game’s best ending.

The Key takes up your sub-weapon slot, so you won’t be able to use any of the game’s sub-weapons if you want to hold onto it. It can function as a sub-weapon, but it’s reach is quite short (limited to point blank range) and doesn’t have an Item Crash move. You’ll also lose the Key if you die, so you’ll need to be careful once you have it. 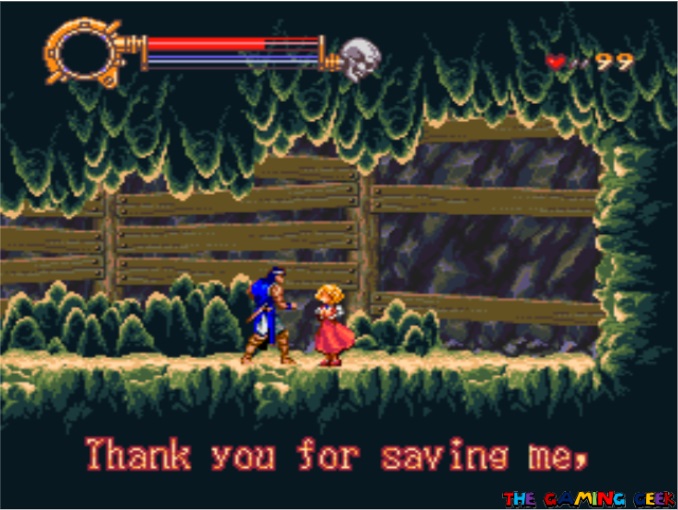 Rescuing Maria is the first step towards getting the game’s best ending.

Later on, you’ll encounter a door that you can unlock with the Key. This will lead you to Maria, who will give you another Key. At this point, beating the game will already lead you to the game’s “good” ending. If you’re able to find the door that this second Key will unlock, you’ll be able to rescue Annet, which will unlock the best ending.

As I was progressing in Dracula X, I noticed that this game doesn’t feature as many enemy types as other Castlevania games that I’ve played. There’s still good variety in the mix of enemies, but other games have offered more. Looking at the bosses that this game had to offer, I was satisfied to see some Castlevania mainstays. 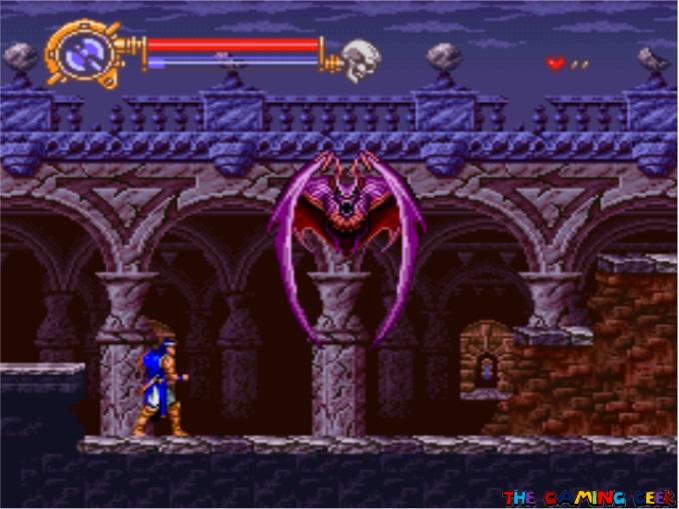 Each boss offered some interesting attack patterns and required different approaches. If I were to nitpick, I’d say that there is an opportunity to add a few more moves or abilities to the bosses of the earlier stages. Later boss fights are much better in terms of design, except for the battle with Dracula which is quite unfair. 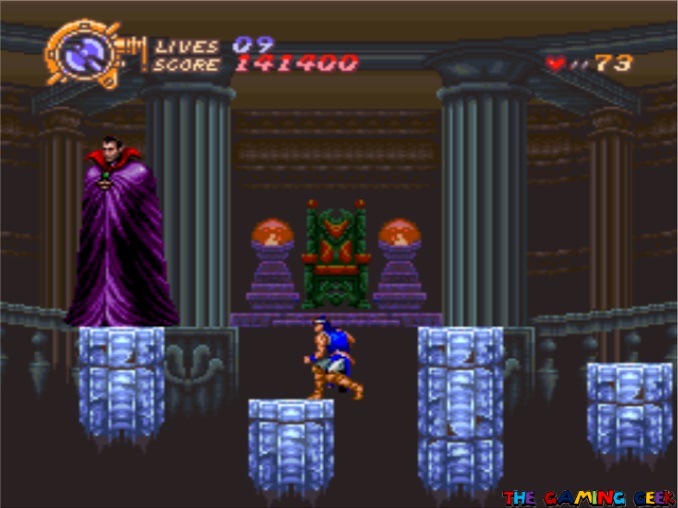 His area doesn’t have a floor. Instead, you’ll need to stand on top of columns. These are of different heights, and there are pits in between them. It’s quite easy to get knocked off of a column and into a pit, which can instantly kill you. In fact, you could end up falling into a pit just by making an errant jump. When you die, you’ll respawn several rooms back. Dracula also teleports constantly, appearing on random columns. To win in this battle, you’ll need a lot of patience and luck.

Dracula X has some pretty good graphics. Sprites are quite detailed, especially for the bosses. Richter’s sprite is a little small, but that works in a way that gives you space on the screen. And the stages also look really good, both the foreground and background elements.  Stages look distinct and it’s very easy to identify what kind of location is being depicted because of the level of detail in this game’s graphics. 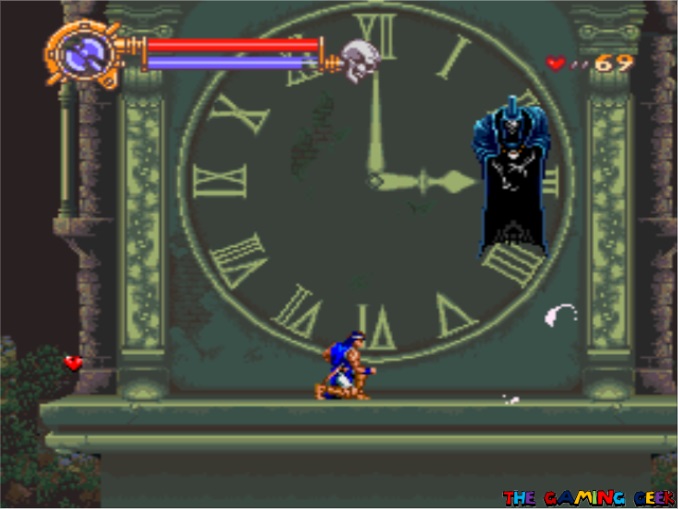 Death is a popular Castlevania boss character that also shows up in this game.

As for sound, I was also quite pleased with what this game has to offer. I especially liked the remixed versions of Vampire Killer and Bloody Tears. Sound effects are also adequate. It was definitely a treat to listen to this game as I was playing it.

In terms of presentation, this game was also quite adequate. There’s an opening sequence with text to lay out this game’s plot over some illustrations, and an ending sequence at the end. I think a few more cutscenes would have added to this game’s fun factor, but what it has did it’s job. Game text, fonts, and the HUD all looked great.

Castlevania: Dracula X is a solid game that’s a little thin on content and doesn’t show a lot of improvement of what came before, aside from the graphical and sound upgrades. And I think that’s why people didn’t like this game a lot, especially since the other games released previously offered a lot more. Instead of pushing the envelope forward, Dracula X takes a step backwards.

I was glad to play this game before my stops for Bloodlines, Rondo of Blood, and Super Castlevania IV. If I had played this after any of the three games that I mentioned, I might have been disappointed. I enjoyed this game when I played it, but it would be hard for me to recommend this game knowing that there are better Castlevania games available.