Konami developed two versions of Batman Returns for Nintendo’s home consoles. I already had the chance to play the NES version and I had a blast, although I did have some issues with it. So I was looking forward to what Konami could do with the Batman franchise on a more powerful console. Today, let’s talk about Batman Returns for the Super Nintendo Entertainment System. 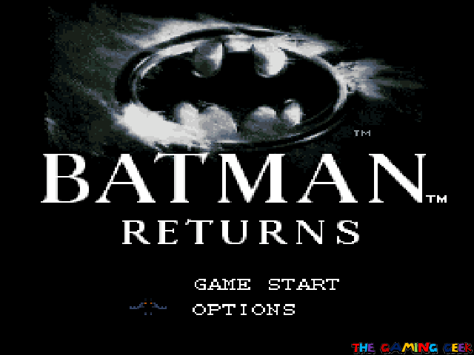 Like it’s 8-bit cousin, Batman Returns for the SNES is a beat ’em up that was developed and published by Konami. The game is also based on Tim Burton’s 1992 film of the same title. In the game, you take on the role of Batman who has to deal with the threat of the Penguin and the mysterious Catwoman. There’s only one game mode, which is limited to one player. The game does offer several difficulty settings, as well as options for the number of lives that you have (3, 5, or 7). There is no password or save system, but you do get three continues.

The first stage of the game is a reenactment of the Red Triangle Circus Gang’s attack on Gotham Plaza.

Similar to other beat ’em up games, Batman Returns features stages that are set on a plane instead of flat platforms. All enemies have their own health meters, and most will require several hits before they are defeated. By changing your position on the plane, you can avoid attacks from your enemies.

The game also features platforming sections with flat stages. These sections are played with run and gun mechanics, with Batman tossing Batarangs instead of using melee attacks. These platforming sections also have pits and gaps that will kill you instantly if you fall into them. Finally, there’s a Batmobile stage that’s highly reminiscent of F-Zero, but instead of trying to win a race, you have to defeat a boss at the end.

I was surprised at how well Batman fits into a beat ’em up game. He’s got his martial arts skills in display, being able to string a flurry of punches and kicks into multi hit combos. He’s got a flying kick, as well as a gliding attack. He can also block attacks, reducing incoming damage and avoiding getting knocked down.

Finally, he can also grab enemies in this game. When he’s grabbing an enemy, he can attack up to three times (the third attack breaks the hold). He can slam the enemy into the ground, and you can control which side he does this on. It’s a good strategy to grab an enemy and toss them behind you, to keep yourself from being surrounded. Occasionally, you’ll be able to grab two enemies and knock them into each other. 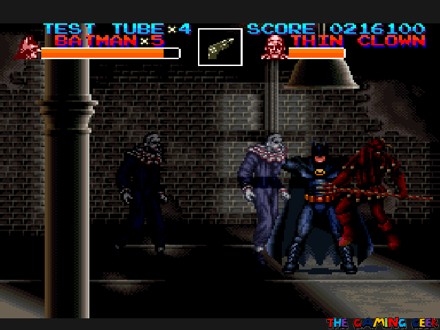 Batman also has a health draining cape swing which hits enemies all around him. I avoid using this move unless absolutely necessary. Batman also makes use of a few gadgets in the game and I have to tip my hat to Konami for making them fit into beat ’em up game mechanics. He can collect and use test tubes, which works as a screen clear attack. These are limited, but are powerful enough to knock bosses out of their attack animations. 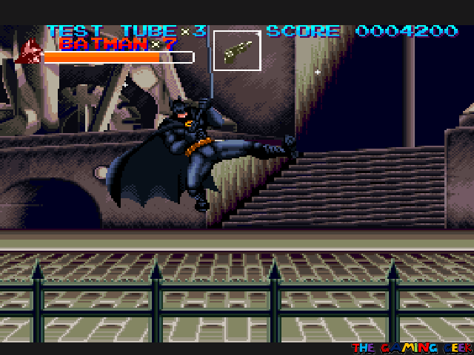 You can switch between the grappling hook and Batarang during the beat ’em up sections. The grappling hook triggers a special kick that hits everything in its path. It drains a little health, but it can move you across the screen and help you avoid getting surrounded. Throwing the Batarang doesn’t do damage, but it can stun enemies from a distance. My favorite gadget, the Batarang can help you get into better position for attacking.

And true to the movie, the game also uses the Red Triangle Circus Gang as cannon fodder. I haven’t seen the movie in years so my recollection is spotty, but I do recognize some of these enemies. The most notable ones are the motorcycle riding clowns who can run over you, and the organ grinder that serves as an end level boss.

You get to fight a circus strongman and an organ grinder as end level bosses.

There are different kinds of clowns and other circus performers. You’ve got cartwheeling clowns, clowns armed with dynamite, bazooka clowns, fat but athletic clowns. You’ve got clowns on stilts, knife throwers, sword swallowers, and fire eaters. They behave differently enough from each other, so the experience wasn’t repetitive for me.

You’ll need to defeat Catwoman before you can progress.

Of course, the highlight of any superhero themed video game are the battles with supervillains. Because this is a depiction of the 1992 film, we’re limited to just Catwoman and the Penguin. You do fight them several times just like the movie. Both are well designed bosses, with moves and attacks that are true to the characters. The game is limited to what happens in the movie, so if you know the movie well, you’ll be able to predict this game’s story flow.

The graphics of Batman Returns are amazing. Sprites are large, detailed, and are animated well. It’s easy to tell each character apart, as well as understand what they’re doing. Even the stages look amazing. I don’t remember the movie all that well and yet, I was able to recognize the locations that the stages were able to depict. Konami did well in maximizing the SNES hardware, even using some cool lighting techniques in some of the stages.

Batman’s pursuit of Catwoman is the setting for the third stage.

But the music of this game is much better. I can’t believe that Konami was able to secure Danny Elfman’s music for the game. Having music from the film, or music that sounds like it was from the film just makes it fit the game by default. It was such a treat listening to the themes as I was playing the game. And the sound effects are awesome, especially Batman’s attacks when they land on enemies.

A quick intro plays when you start your game.

The presentation is also top notch, with Konami including a lot of scenes and fanservice moments in the game. You can recreate the scene where Batman saves Selina Kyle from a clown who has a stun gun by shooting your grappling hook at a wall. 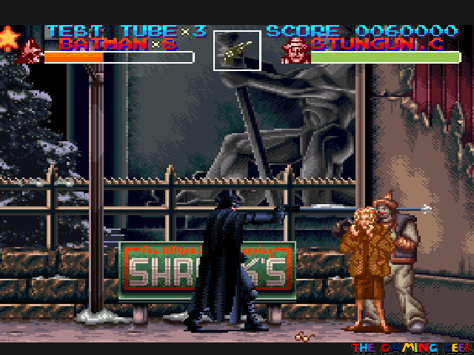 Remember this moment from the movie?

You get to battle the Penguin in his duck vehicle too. My only problem with the flow of the game is how it omits Selina’s transformation into Catwoman and her vendetta against Max Shreck. If you didn’t watch the movie, you wouldn’t understand why Catwoman is working with the Penguin against Batman. I think the game would flow much better if Konami included optional cutscenes that still kept this plot point in the game.

After playing the game twice, I can say that Batman Returns will probably be in my top five when it comes to the best superhero games available on 16-bit consoles. The game plays really well, with great mechanics and excellent controls. It offers several difficulty options so you can adjust the challenge based on your comfort level. Despite the gaps in the story, it still works in re-telling the important events of the film.

Sure, there’s no two player option, which was always held against beat ’em up games during the time this game was released. But Batman didn’t have a partner in the movie, so a two player co-op mode is completely inaccurate. If you prefer playing beat ’em up games with a partner, Batman Returns is simply not going to deliver that.

Otherwise, this game is definitely worth revisiting today. Top notch graphics, great game design, and themes from the film made my experience with the game quite fun. If I weren’t writing a blog and I didn’t have to play other games, I would have gone back to this game and played it a couple more times. I highly recommended Batman Returns to any Batman fans or fans of superhero games in general.