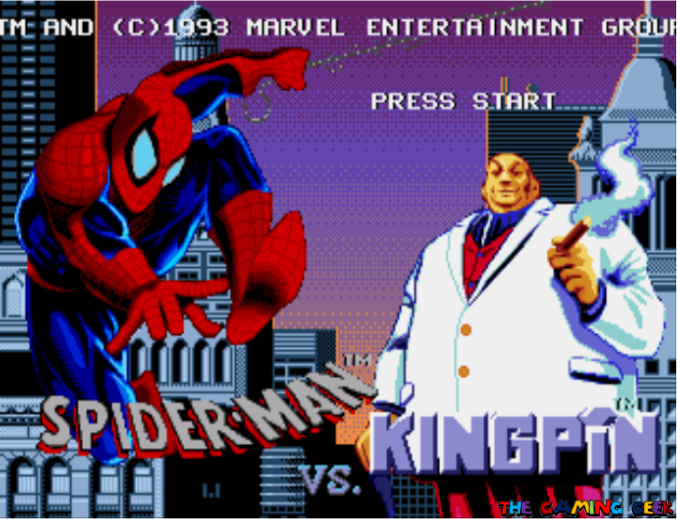 Title screen for The Amazing Spider-Man vs the Kingpin for the Sega CD.

The Amazing Spider-Man vs the Kingpin is an action platformer that was developed by Gray Matter and published by Sega for the Sega CD. You play as the titular hero, who is being framed by the Kingpin. Through television broadcasts, the Kingpin informs the public that Spider-Man has planted a bomb that will explode in 24 hours. It’s up to Spider-Man to find and defuse the bomb, defeat the Kingpin, and clear his name. The 24 hour time limit is implemented in the game. It is faster than real time, but it is long enough for you to beat the game. 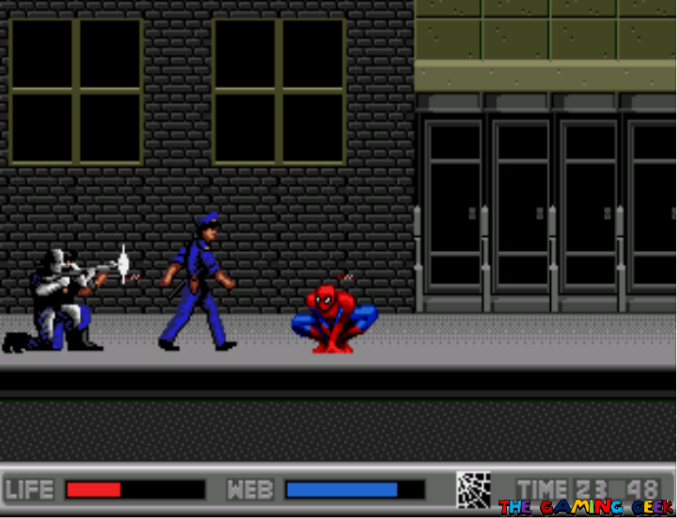 You’ll have law enforcers chasing after you for the entire game.

Unlike platformers released during this period, this game won’t have you go through the stages in a fixed order. Instead, you can choose which stages to play via a map screen. On this screen, green dots are normal stages and red dots are where the bosses await. There are more stages to choose from, and they’re mostly very short. To be frank, since you can easily see the stages with the bosses, I’m not sure if there’s any reason to go through the green stages. I went through them anyway just to get a full experience of the game. 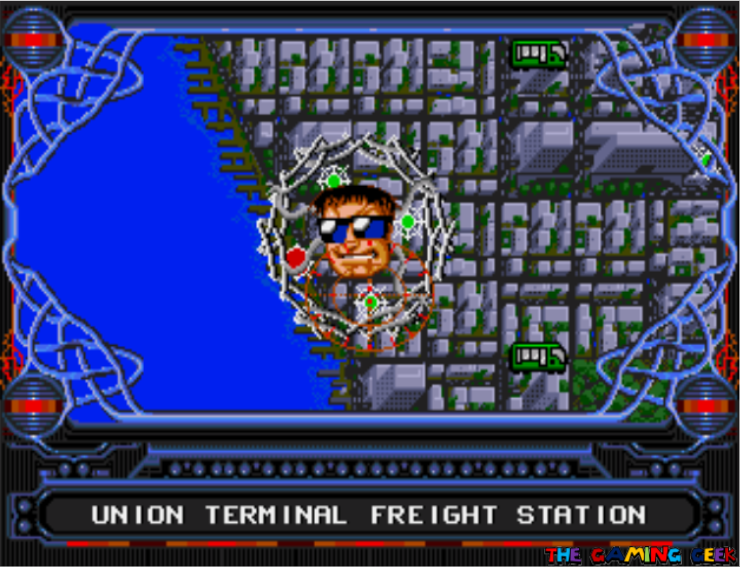 Choose your own adventure.

You’ve got a health meter as well as a web meter in this game. There are plenty of health and web meter refills all around the stages. You don’t have lives in this game. Like the original version, you can keep continuing when you die, but doing so will deduct two hours from your remaining time. When time runs out, it’s Game Over. Fortunately, this game has a password system so there is a way to continue progress. You’ll get a password every time you beat a boss.

In The Amazing Spider-Man vs the Kingpin, I was surprised at how many moves you could do as Spider-Man. The D-Pad controls his movement. Pressing Down makes Spidey crouch, and you don’t have to hold Down to keep him crouched. While crouched, he can crawl to the left or right. Unlike the original, Spidey can wrap around corners in this game, but it doesn’t work all the time (you might end up falling off corners). Surprisingly, Spidey crawls faster than he walks. I found myself crawling a lot, even while on the floor, because of this. 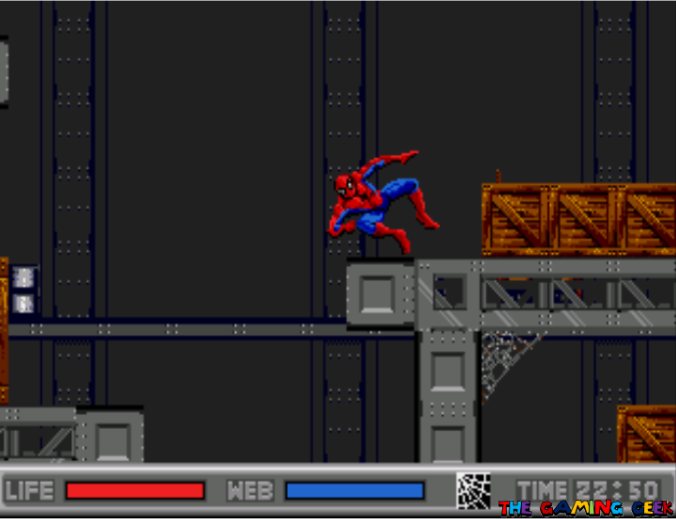 Spidey does a cartwheel-like move when moving from a wall to the top of a platform. 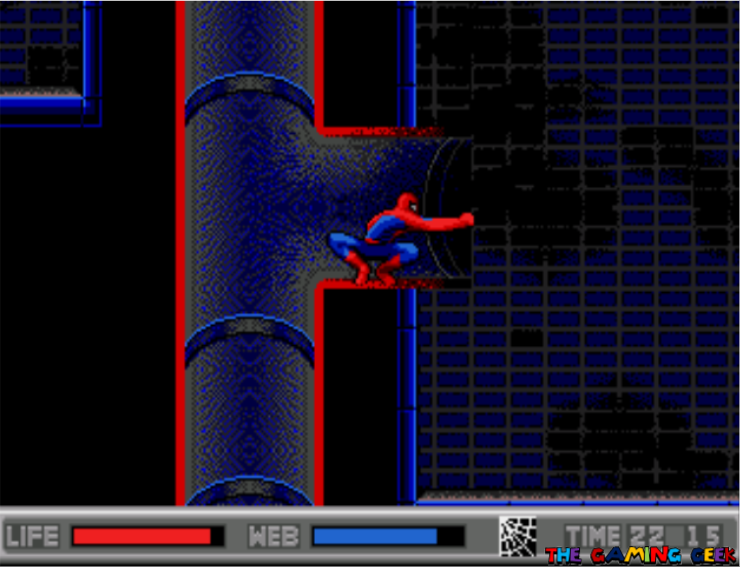 He’s also got his usual attacks: he punches when standing and kicks in mid-jump. Spidey has two different attacks while crouched though. Normally, he punches when attacking while crouched. But if you press the Down button as you attack, he’ll do a low kick instead. This was actually handy, because the low kick is for really small or really low enemies. 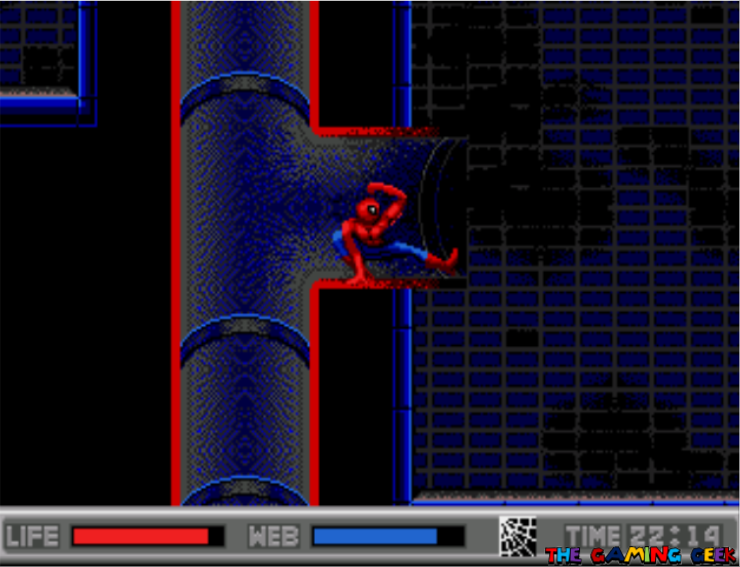 Holding Down while attacking will make Spidey do a low kick.

I think it’s worth noting that Spider-Man’s attacks land better in this game, especially his flying kicks. Enemies like bats will no longer give you as much trouble as they did in the original.

When you press the Start button in The Amazing Spider-Man vs the Kingpin, you’ll see the special webbing moves that you can use. By default, you’ll have the capture webbing selected. This will make you shoot out webbing that entangles enemies in a webbing net. 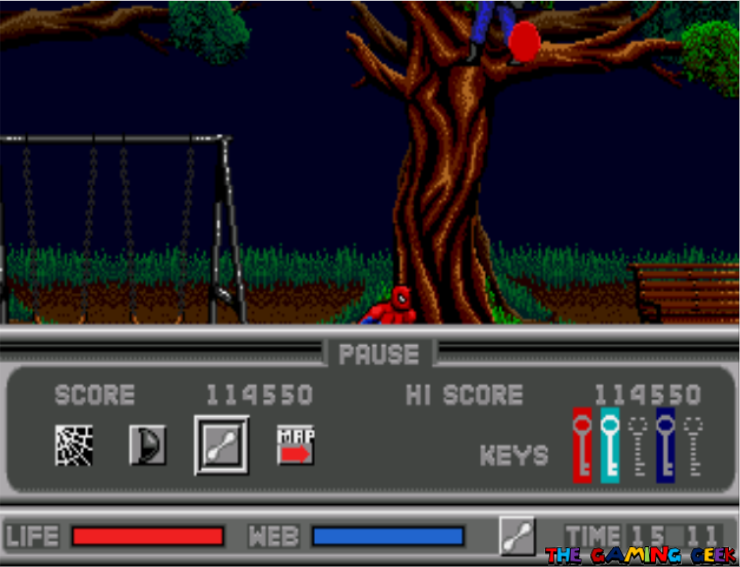 The web shield is a defensive webbing power. Like in the original game, this will block enemy attacks and prevent damage. Unlike the original, this web shield disappears after a short while. It also doesn’t look like an actual shield in this game. The web shield uses up quite a bit of webbing, so use it sparingly. 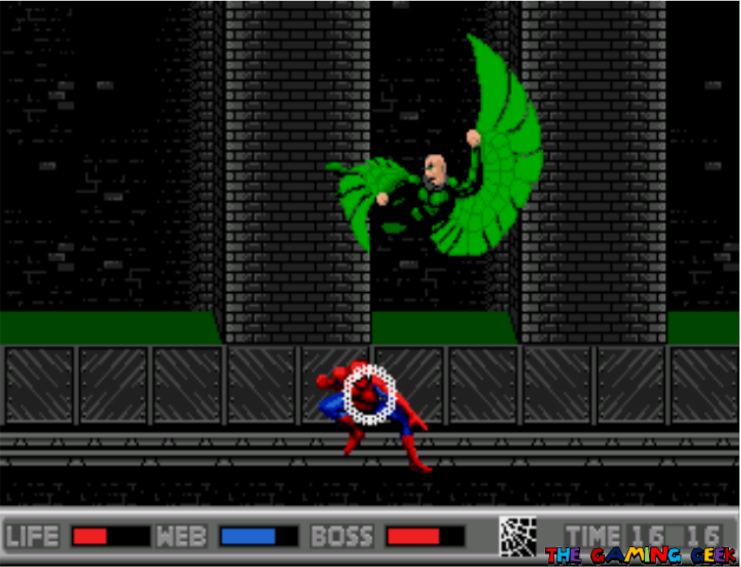 The web shield looks like a ring of pulsating energy.

The third webbing move is a bola. Unlike the capture web, this actually deals damage to enemies. But it uses up a lot of webbing, so I rarely used it. The last option in the Pause Menu simply returns you to the Map screen.

Added Features from the Original

Since The Amazing Spider-Man vs the Kingpin is a remake of a game that I’ve already played, it’s hard not to notice what else has changed. Well, this game has more boss fights! In addition to the original game’s roster of supervillains, this game features Vulture and Mysterio as boss characters. Part of the Mysterio sequence involves a pinball stage. 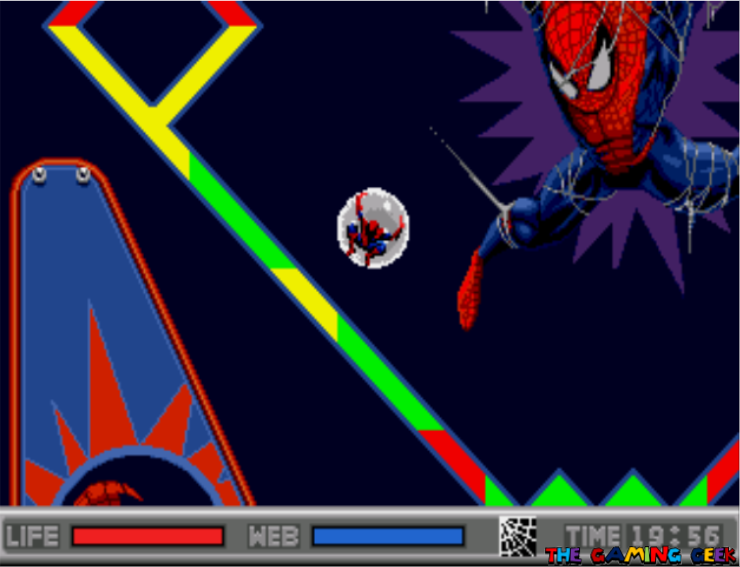 The pinball stage was awkward to play because of the controls.

I would have loved this stage if it weren’t for the controls. Normally, you want something on the left of the controller to move the left paddle of the pinball machine. In this game, the A button controls the left paddle and the C button controls the right. The D-Pad can influence Spidey’s trajectory. So it’s all awkward, since you need to have thumbs on both the A and C buttons almost every time, while also needing to press the D-Pad occasionally. 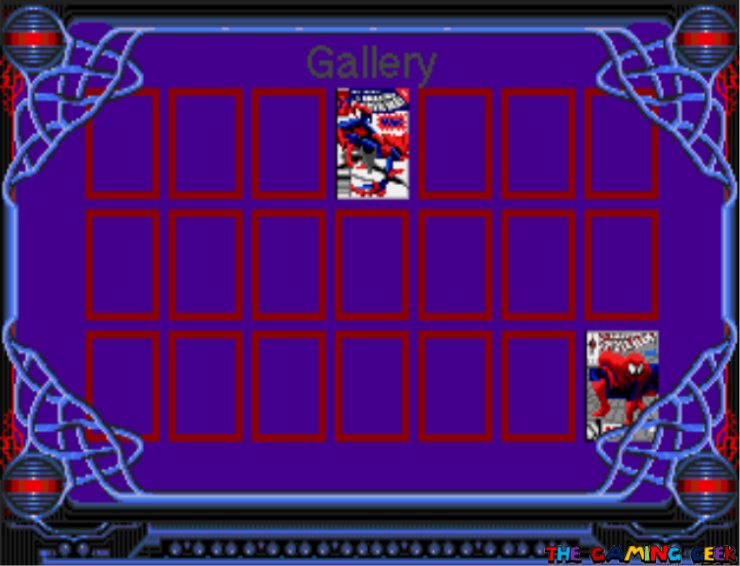 Can you find all the comic books hidden in the game?

There’s also a collection mechanic in the game that involves finding these comic book covers hidden in the stages. This is neat for a Spider-Man fan. I even recognize most of the covers! Too bad there isn’t a way to view these up close, you’ll have to enjoy these thumbnail-sized covers.

Since the Sega CD is just a 16-bit console with a larger storage capacity, The Amazing Spider-Man vs the Kingpin didn’t offer a huge leap when it comes to visual quality. For the most part, this game looks the same as the original. This one is a bit cleaner now, with some sprites looking a lot better. There are also additional frames of animation which makes the game flow much smoother. 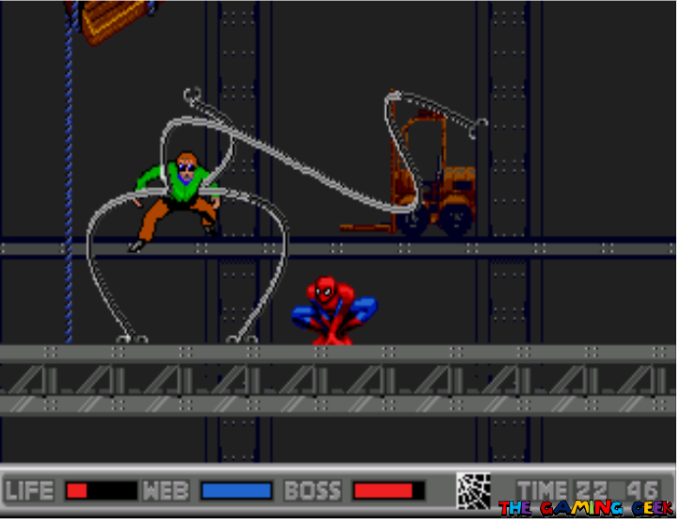 Some of the bosses had changes to their movement and attack patterns.

Games from this console are known for their CD-quality music tracks, and this game is no exception. You’ll listen to actual rock music while playing this game. At first, it felt awkward. One particular track sounded like a generic rock song and didn’t really fit well with the game. But as I got used to the tracks, I started to enjoy them more. One track of note is Swing Time, which is an actual song with lyrics. The vocals for the song were done by Eric Martin of Mr. Big 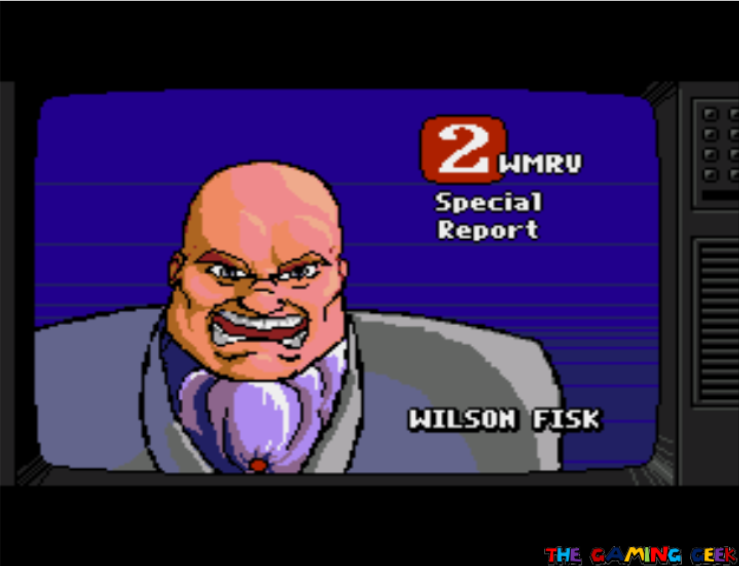 This game has a lot of animated FMV cutscenes.

Finally, we get to talk about presentation. This game is known for it’s animated FMV cutscenes, and not in a good way. The animations and actual illustrations themselves are quite bad. There is voice acting, and it varies between bad and mediocre. But I wouldn’t take anything away from the developers. During this time, they didn’t have a lot of money to spend on better animation and voice acting. I consider this game’s bad FMVs as a novelty. My only complaint regarding this is who they cast for the role of Spider-Man. His manner of speaking doesn’t fit the character and is more in line with “macho” superhero types.

Viewed on it’s own, The Amazing Spider-Man vs the Kingpin is a really good game. It doesn’t look as good as other 16-bit titles released after it, but it plays well and is quite polished. It’s got a good story and it tries something new by offering a non-linear approach to stage progression. If I compare it to the original game, I’d say that this game is better due to the improved mechanics. I do miss needing to take pictures of enemies in order to refill the web meter, and having to go home and rest up.

While not the best Spider-Man game available on 16-bit consoles, this one is pretty good. It doesn’t have any glaring issues that impacts gameplay negatively. And the final boss sequences make it worth the playthrough. Spider-Man fans should definitely give this game a try.