Sega CD Games – The Adventures of Batman and Robin
0 Comments

When I learned that the Sega CD version of The Adventures of Batman and Robin was considered as the “lost episode” of the popular animated series of the same name, I got really curious about it. I learned that it was a driving game – not what you’d expect from a Batman game. Since I’ve been playing a lot of action games recently, I decided it was time for a palate cleanser.

Title screen for The Adventures of Batman and Robin for the Sega CD.

The Adventures of Batman and Robin on the Sega CD is driving game that was developed by Clockwork Tortoise, the same studio behind the Genesis version. As this is a driving game, you take control of the Batmobile and the Batwing as you go in pursuit of Batman’s enemies. In most of the game’s stages, you either have to get to the end before time runs out or pursue and defeat a boss character before they get too far. 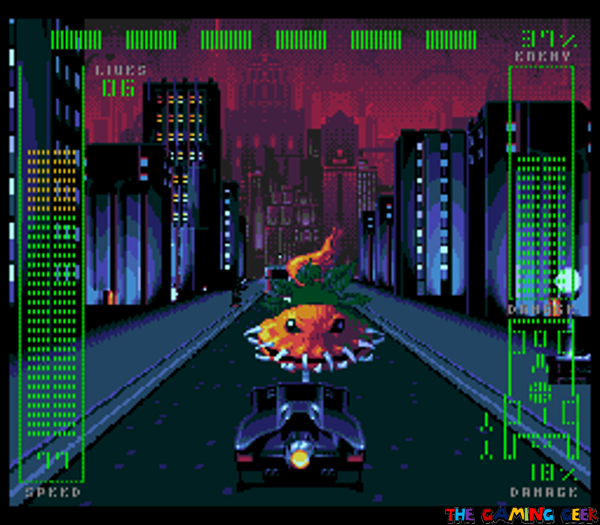 You can dodge or shoot these man-eating plants down.

You’ve got a Damage meter in this game, which starts from 0% and increases as you take damage. As far as I can tell, there aren’t any power ups that will reduce the damage. But you do get some damage reduction when you progress to another stage, and you start from 0% damage at the beginning of each episode. When you’ve accumulated 99% damage, you lose a life. The game gives you seven lives per attempt and three continues. You can also earn extra lives by collecting the Batman power up. This seems a lot compared to most games released during this era, but you’ll need all the help you can get if you want to beat this difficult game.

During the Batmobile stages, pressing left or right on the D-Pad moves the Batmobile accordingly. You need to press and hold the B button down to accelerate forward. The C button is for shooting regular, unlimited missiles, while the A button is for shooting more powerful but limited homing missiles. There’s a power up that you can get that upgrades your regular missiles. You lose these upgrades when you lose a life. 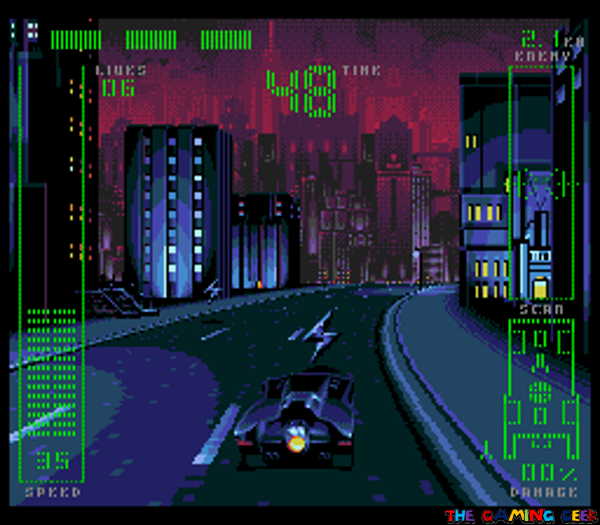 I think this upgrades your regular missiles and makes them stronger.

Controlling the Batwing is pretty similar, only that you can now move up or down by pressing Up or Down on the DPad. This is reversed though; Up makes you move down, and vice versa. In these stages, you’ll need to deal with enemies and obstacles on the ground and at different elevations. 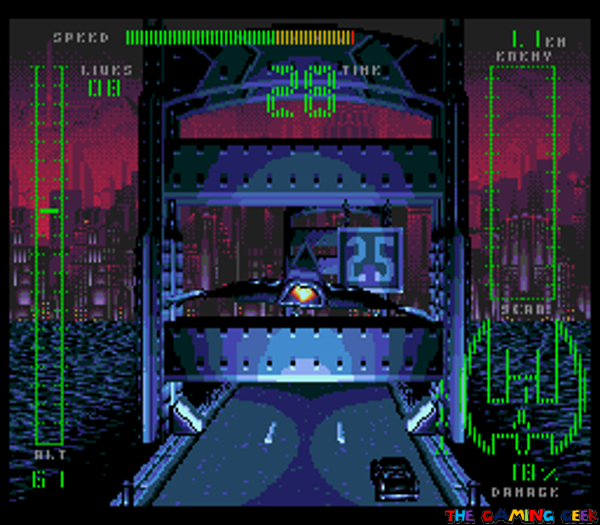 Flying the Batwing across the Gotham sky.

This is the best time to talk about my first major issue with the game. Because you almost always have to keep the B button held down, it is very difficult to shoot. I think this would have worked on a controller with shoulder buttons, where accelerating can be mapped to the L or R button. But the Sega Genesis only has face buttons. I had to adjust my hand in such a way that my thumb is keeping the B button pressed while pressing the C and A button with my forefinger. And that’s not a comfortable way to hold a controller.

The biggest problem that I have with The Adventures of Batman and Robin is how there’s not enough content in the game. There are four episodes total, which are divided into smaller, shorter stages. To artificially increase the gameplay value of the game, the developers made it quite difficult in a cheap way. For instance, the time limits in each stage only allow for a small margin of error. Make too many mistakes and you’re guaranteed not to make it to the end of the level. 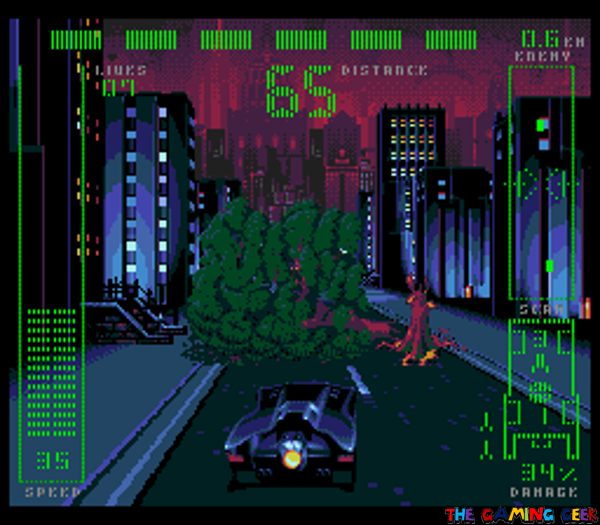 If you’re not fast enough, these trees can end up blocking the entire road.

And the game employs a lot of cheap tactics to goad you into making a mistake. In Poison Ivy’s stages, there are trees that are cut in half. The top part will fall down and block the road – you have to be fast enough to make it past it before it falls entirely. 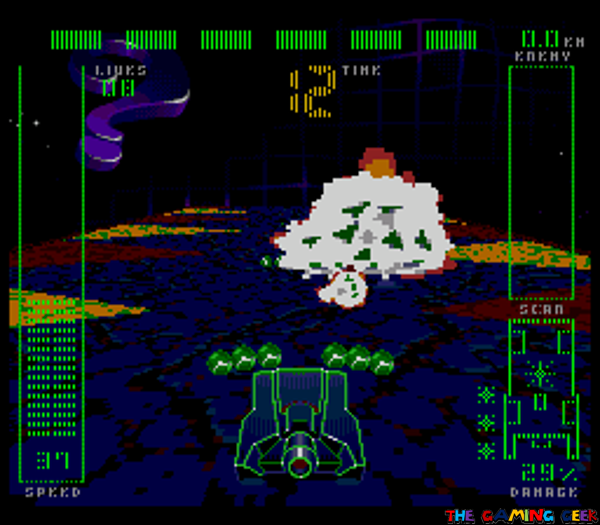 These explosions are nice to look at, but block your view of the oncoming road.

There are large explosions that are pretty good visually, but they can impede your vision and hide oncoming enemies and obstacles. Some enemy patterns are so hard to avoid when you’re moving at full speed. But you can’t slow down for too long because you’ll run out of time. 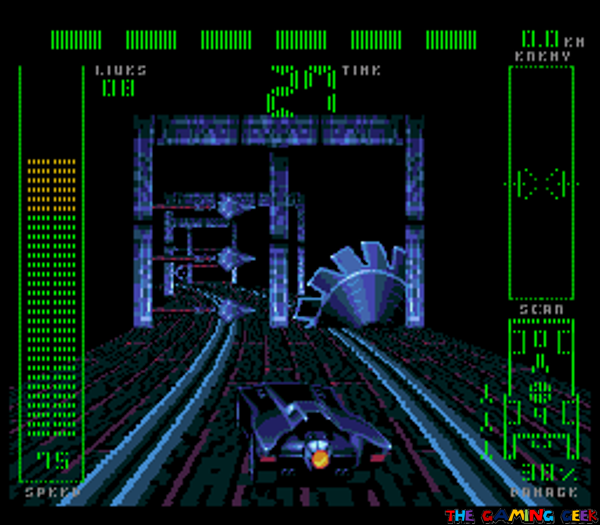 Joker’s episode is by far, the worst in the game. Most of the stages in this episode will have you run several laps around the same tracks. So yes, you’ll just drive through the same section of road for several times. There are retracting spears that will force you to a complete stop when you hit them. There were even sections wherein I couldn’t tell what was going on because of all the explosions and obstacles.

The Adventures of Batman and Robin actually looks pretty good. For a 16-bit game, there’s a good level of detail in each of the visual assets used. The Batmobile and the Batwing all look great. Unfortunately, because of the nature of the game, that’s as far as it goes. All you see from boss characters are the backs of their vehicles, so boss battles here are pretty forgettable. 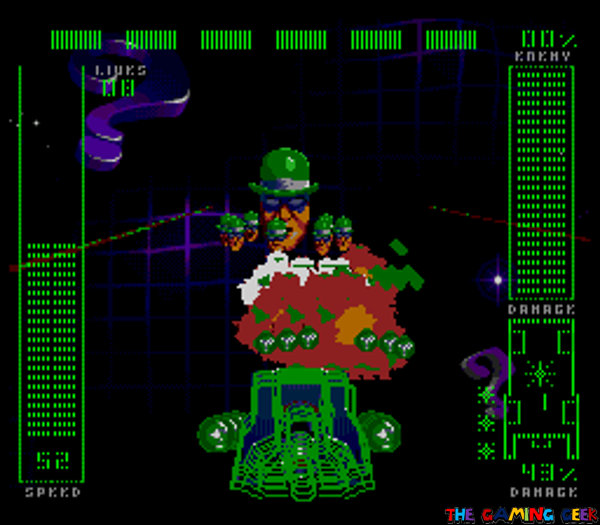 Battling the Riddler in his VR world.

The music in the game is also quite forgettable. Maybe it’s because the game is so frustratingly difficult, so 100% of my attention went into making sure that I made it to the end of each stage. But yes, I don’t remember any of this game’s music or sound effects. At least I can say that the music wasn’t bad, because I’d remember it and probably turn the volume down. 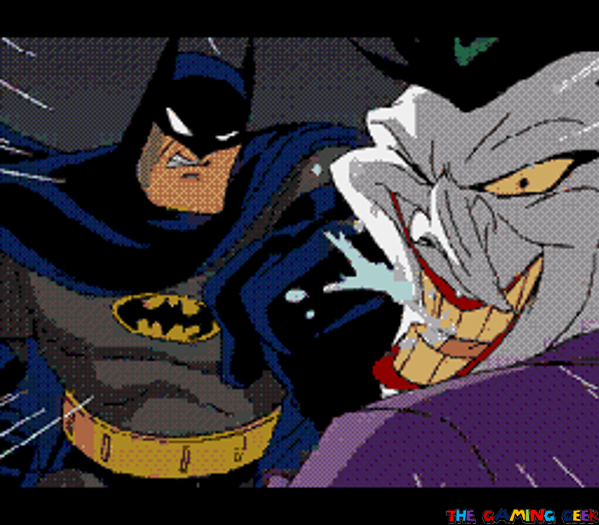 Batman vs the Joker.

The only real saving grace that this game has are in the cutscenes. The FMV is grainy, but I’ll blame the available tech for that. The animation is pretty good because they were done by Warner Bros. Animation themselves. All the voice actors in the game are the original ones from the series, including Kevin Conroy as Batman, Mark Hamill as the Joker, and Ron Perlman as Clayface, to name a few. The story isn’t anything to write home about, actually. Aside from these, the game could have used a lot more polish, like adding title cards at the start of each episode

I think The Adventures of Batman and Robin on Sega CD was just doomed from the beginning. It was made on a game system with a controller that doesn’t really work with the concept of the game. Getting Warner Bros. Animation and all of the original voice actors to work on the animated cutscenes must have also taken up a lot of the budget that went into producing this game. There are some ways that could have made this a better game. Longer stages, additional game modes, and a more accessible difficulty are a few that I can think of at the top of my head. 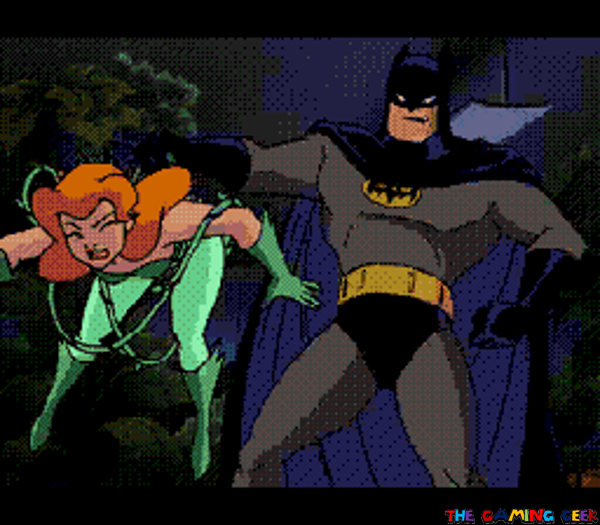 Because of the exclusive animation sequences, I think this game is a worthwhile addition to any Sega CD collection. But they aren’t worth the time and effort you’ll need to spend in order to watch them. Just use the level skip cheat: pause the game and press B, A, Down, B, A, Down, Left, Up, C (BADBADLUC). Don’t waste your time on this.