I finally found a great opportunity to try out Star Wars: Rebel Assault. I needed a palate cleanser that isn’t an action platformer, and I’ve been looking for Sega CD games to play and write about. Well, this is the perfect game for me to play at this moment! 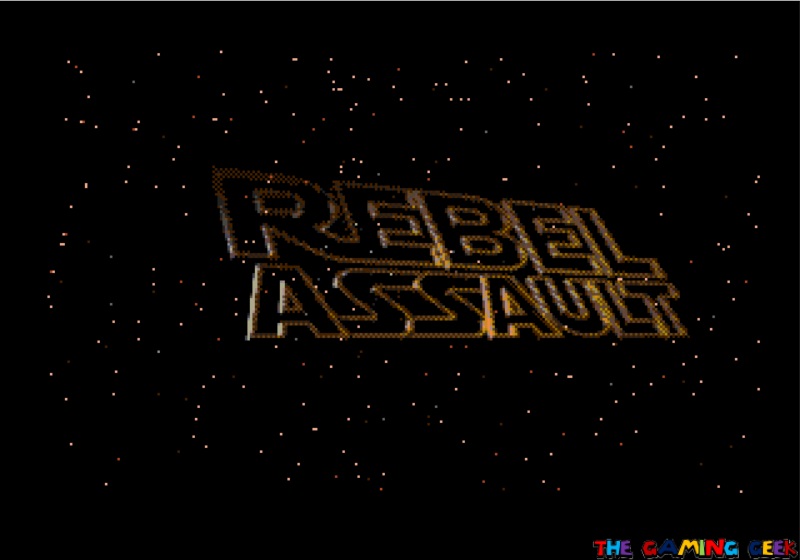 Star Wars: Rebel Assault is mostly a rail shooter with some flight simulation elements added. LucasArts developed and published the game for PC, Macintosh, the 3DO, and the Sega CD. This game takes place in the middle of Episode IV and Episode V of the Star Wars film trilogy, so I thought this was the best time to try this game out. You take on the role of Rookie One, a young pilot and new Rebel recruit who finds himself in the middle of very important events in the war against the Galactic Empire.

You’ve got a health meter in this game, along with a number of lives. You start your game with four lives, and you can get more whenever your score reaches certain thresholds. I’m not sure how many lives you can have since the HUD only indicates a max of five, but I’m certain that it goes beyond that. The game offers three difficulty options (Easy, Normal, Hard) and also has a password system. There aren’t any additional gameplay modes aside from the main campaign.

The Main Way to Play: First Person Inside the Cockpit Mode

You spend most of your time in Star Wars: Rebel Assault inside a vehicle, and the game offers three different playstyles for this. The most frequent, and the style that I like the most has a first person cockpit perspective. This style plays as a standard rail shooter where your path is fixed. In this mode, your primary focus is to shoot down enemies before they have a chance to shoot you. 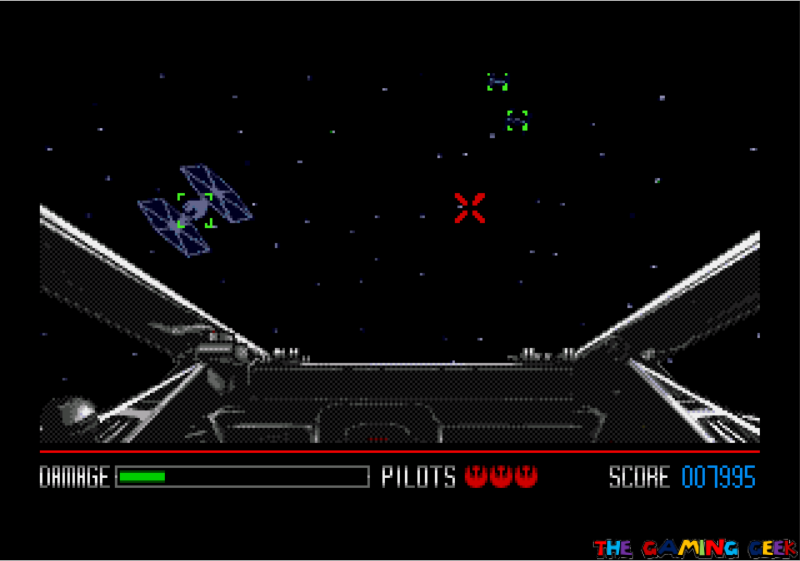 Shoot down as many TIE fighters as you can!

You have a red reticle that is controlled by the D-Pad. Pressing the A button shoots a pair of laser beams. Enemies are  marked with a green box so they’re very easy to spot. You’ll need to fight both mobile and stationary targets all throughout the game. One of my favorite sequences involves doing repeated fly-bys against an AT-AT walker as you keep shooting at it’s armored panels. 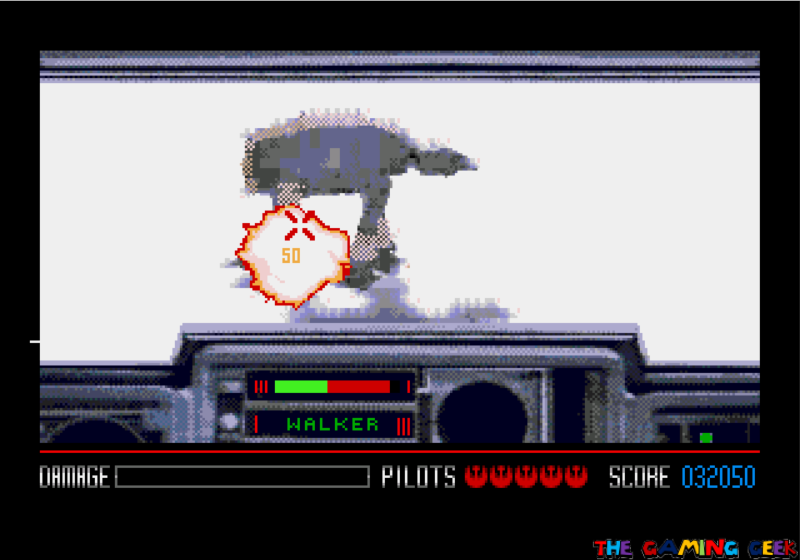 Shooting down the armored panels of an AT-AT walker.

Dying at any time in a level will send you back to the beginning of that level. Unfortunately, this game does not have any power-ups of any kind. On Normal difficulty, you have to be good enough to get to the end without running out of health. Thankfully, your health regenerates on Easy difficulty. 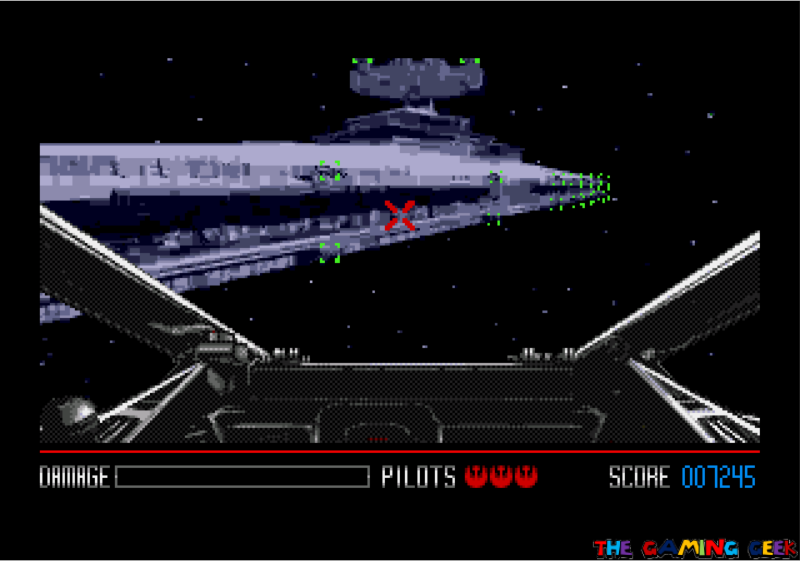 Eliminating the defenses of a Star Destroyer.

This gameplay mode is quite simple, there’s not a lot more to say about it. I do have two minor complaints. First, this game lacks a special attack, like bombs or rockets. I think adding one would have helped add some complexity to the game. My other complaint involves the reticle and how hard it is to control it with a normal D-Pad. Thankfully, I’ve got a controller with a joystick that helped a lot.

Star Wars: Rebel Assault has levels where you can actually fly your spacecraft. One variation of this has the camera behind your spacecraft, which you’ll need to steer through the level’s obstacles via the D-Pad. This is actually a little difficult. For some reason, your vehicle seems to have a mind of it’s own. It has the tendency to veer off the path that you intended. 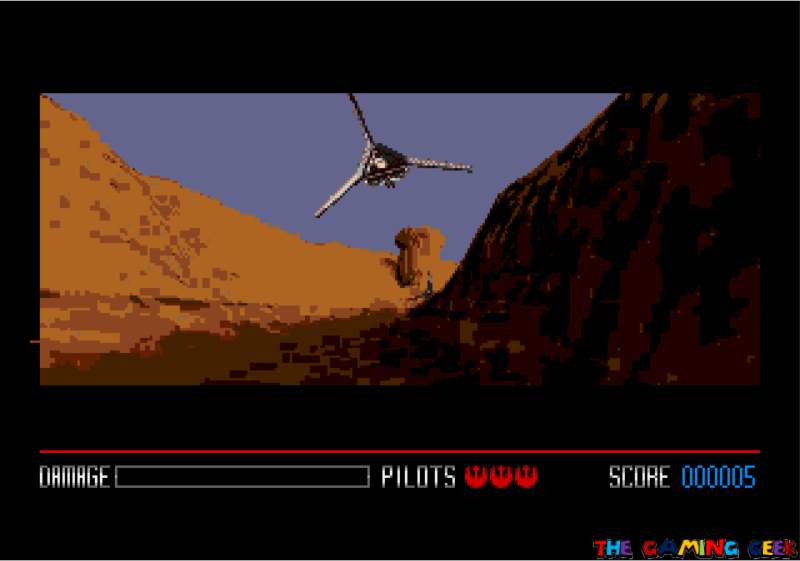 Maybe the developers wanted to replicate real world physics? I eventually got used to it but I still had trouble. These stages don’t look that good, with heavily pixelated graphics that remind me of old SVGA videos. In some of these sections, you’ll need to shoot at targets too. The problem is, aiming and steering are both controlled with the D-Pad. Most of the time, you can’t fire at an enemy because aiming at it will lead you right into a wall. You’ll need to figure out when it’s safe to try to shoot them down. 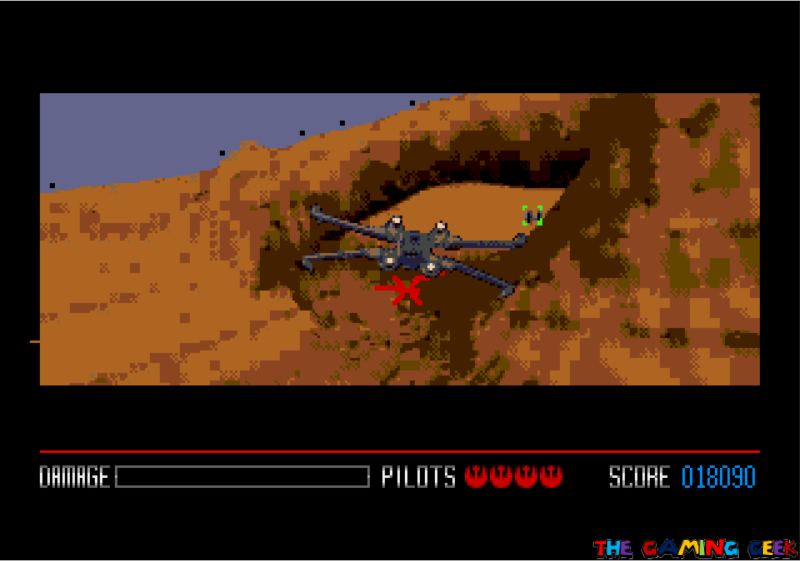 The third vehicle gameplay style uses an overhead perspective. In these, the levels are on auto-scroll, and you have full control of your vehicle. You can finally dodge enemy fire! But your reticle is fixed based on your position. If you want to shoot down enemies, you’ll need to move up close to them. In these sections, there are obstacles in the levels that aren’t clearly defined. You’ll take damage if you ram into them. 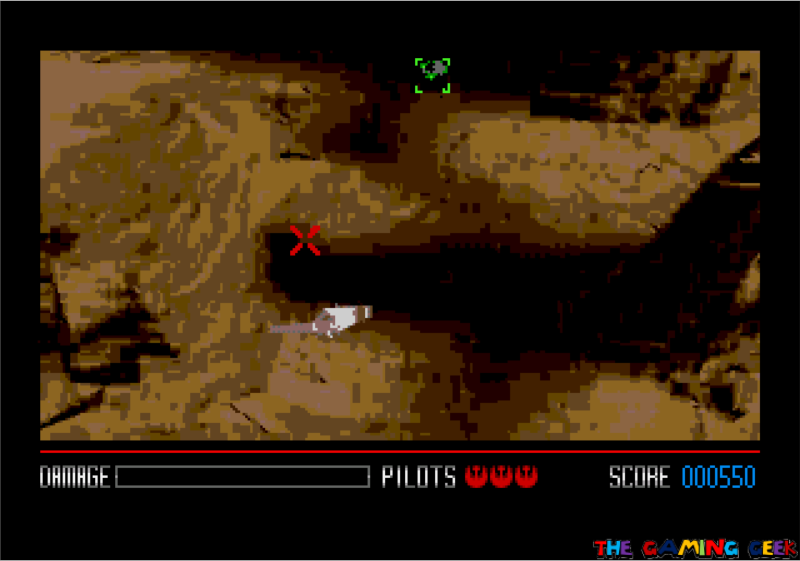 I disliked the overhead sections the most.

The graphics here are also quite bad. It’s hard to make out what objects are supposed to be. Unlike the prior mode, I think this could have easily been represented using traditional sprites. The change of art style might be glaring, but at least it would look good.

There’s a level in Star Wars: Rebel Assault that caught me by surprise. In this section, Rookie One has to leave his vehicle and do the mission on foot! This section still uses rail shooter mechanics but they play more like Virtua Cop games. You still control your aim with the D-Pad and shoot with the A button. Your aim is limited, based on your position on the screen. Pressing Left or Right on the D-Pad while holding down the B button will move your character sideways. This maneuver can either keep you safe from enemy fire (although it’s too slow to be used like a dodge) or to get enemies in range. 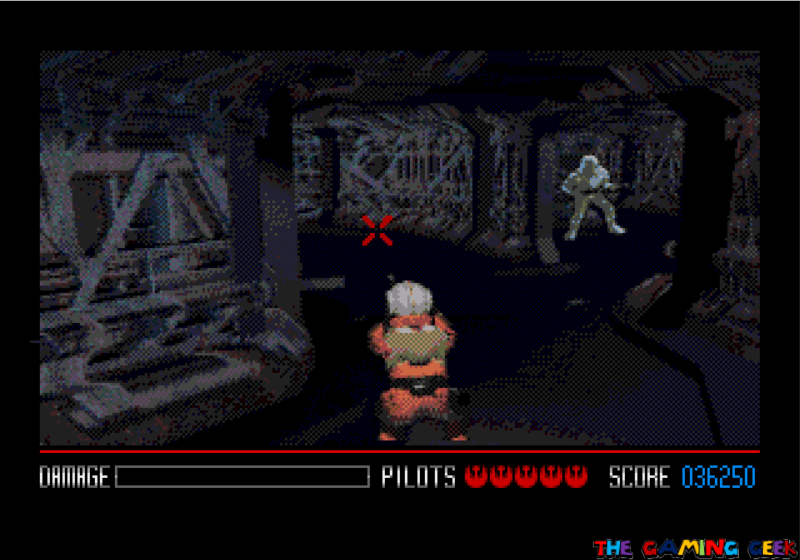 You’ll need to take on lots of Stormtroopers on your own!

Each area has a pre-determined number of Stormtroopers and once you’ve defeated them, you’ll automatically move to the next area. Occasionally, you’ll get to a fork in your path and you’ll need to choose to go either left or right. 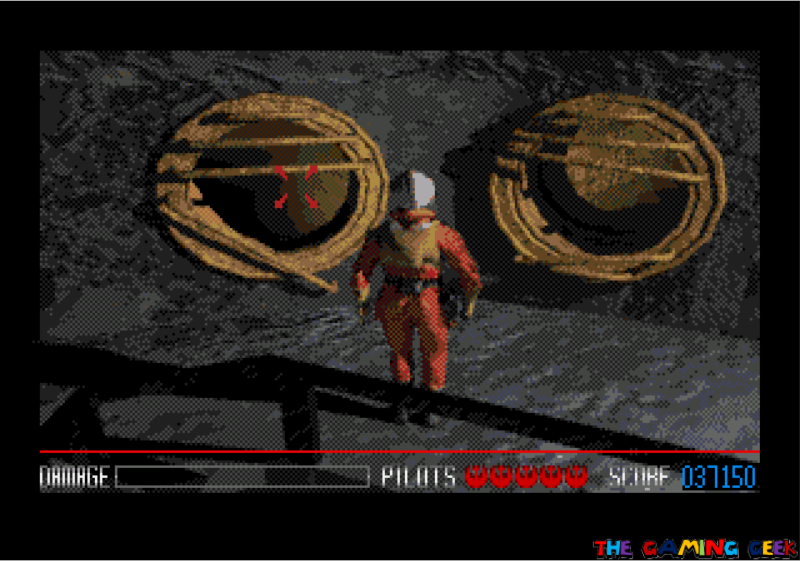 I haven’t gotten the chance to fully explore all paths but from the ones I took, the wrong choices can either send you backwards to an area you’ve already been to, or to instant capture (you lose a life). Correct choices move you forward, until you get to the end of the level.

Let’s get this out of the way immediately: the graphics of Star Wars: Rebel Assault are bad. They might have been groundbreaking back then, but they don’t hold up. Everything is just so blurry and non-FMV cutscenes are poorly animated. I heard that the PC version had much better graphics compared to the Sega CD version, and I wish I had played that instead. The first person inside cockpit stages do have decent graphics but when you’re in the other modes, the game is just hard to take in. 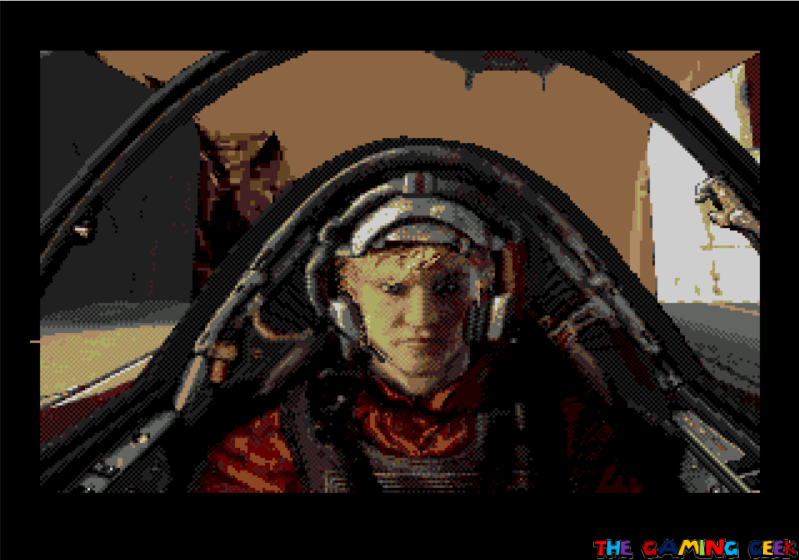 Fellow pilot Ru Marleen will back you up for most of the game.

Thankfully, the game’s music makes up for the graphics. Rebel Assault uses actual music from the film trilogy! Not video game renditions of the Star Wars themes but the actual themes themselves! This was the advantage that the Sega CD had back in the day, and LucasArts made good use of it here. The game’s dialogue also uses voice acting, which is pretty good. They even took several of Darth Vader’s lines in the films and used them here. 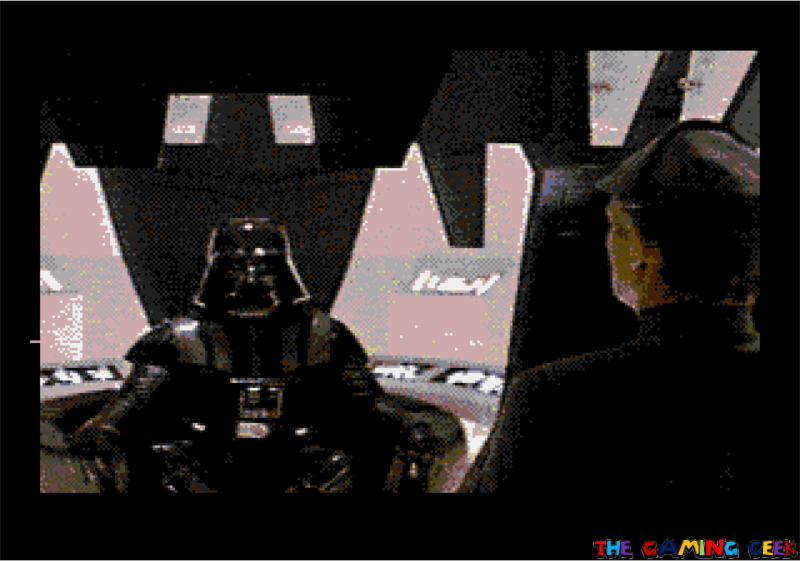 In terms of presentation, this game is a little lacking when it comes to menus, but it makes up for that with these FMV cutscenes that are taken directly from the Star Wars film. I also like the way they begin and end each level with a title card and a summary, along with the password for the next level.

Going into Star Wars: Rebel Assault, I was hoping for a story that featured other heroes. The war wasn’t won just by Luke and his friends alone, and it would have been nice to see other people who fought in these wars to get their time in the spotlight. For the most part, this game delivers. Without spoiling too much, Rookie One was active from when C3PO and R2D2 brought the Death Star plans to Tatooine. 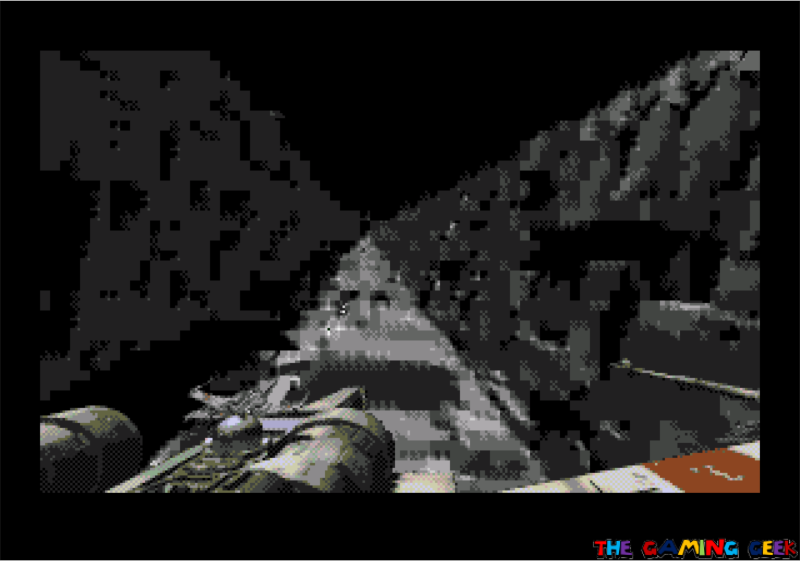 What ruins this game a bit for me is how hard it is to fit this game within the storyline of the film trilogy. In the middle of the game, Rookie One participates in the Battle of Hoth. That actually takes place at the beginning of Episode V. Well, this game ends with the Death Star attack on Yavin, which is the end of Episode IV. Aside from being in the wrong sequence, Rookie One actually takes Luke Skywalker’s place and is the one that fired the shot that destroyed the Death Star. It’s been said that this game is canon, save for the final trench run.

Despite it’s bad graphics, I enjoyed Star Wars: Rebel Assault a lot. Sitting behind the controls of an X-Wing is fun, and this game did provide an experience of that. Being able to listen to the classic Star Wars themes is always a plus. I don’t regret trying this out and spending my time with it. I even did two playthroughs – one on Normal difficulty and one on Easy.

And yet, it’s hard for me to recommend this game. Not everyone will be able to tolerate this game’s really old graphics. I’m a big enough fan of the Star Wars franchise to enjoy what this game had to offer. And I needed to write about Star Wars games, so I was motivated to see this through until the end. Others might feel that this game is a waste of their time. Unless you’re a fan of the Star Wars franchise and you’re really dying to play as many Star Wars video games as you can, you might be better off skipping this.

f you want to check out the other Star Wars video games that I played and wrote about, click here!