Because of the drift issues plaguing Nintendo’s Joy Con controllers, I’ve been looking for better alternatives. In my search for replacement options, I came across the KINVOCA Joy Con Replacement Controllers. Let me talk about my thoughts and experiences with the pair that I received.

There are a couple of these controllers being sold all around under different brands. The ones I purchased have the KINVOCA brand. I was also able to find their website, so I’ll be referring to these controllers as KINVOCA ones. Also, there are several variants being sold on their website, including a version inspired by the Nintendo Gamecube controller. For this review, I’ll be talking about their standard version.

The KINVOCA Joy Con replacement controllers that I have look very similar to Nintendo’s original Joy Con in terms of size and controller input layout. Inspired by Nintendo Super Famicom controllers, these replacement Joy Con come in a light gray shell that feels like is made of cheaper plastic. There are dark gray areas painted on the shell in a D-Pad shape and as a circle around the face buttons of the right controller, looking like actual SFC controllers. They are much lighter compared to regular Joy Con, possibly due to the plastic material used as well as changes in its internal components.

All control inputs available on regular Joy Con are also available on the KINVOCA Joy Con replacements and follow the same placement. The face buttons are in an elliptical shape rather than a true circle. They offer a little more resistance when pressed, giving it a crisper feel. These two differences make me prefer these buttons over what a regular JoyCon has as they are a little larger and easier to press as a result. The smaller buttons (Home, Screen Capture, + and -, SL and SR) are similarly sized compared to original Joy Con and feel the same way. 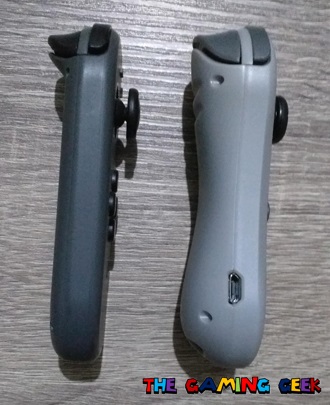 The added thickness and contours of the KINVOCA Joy Con replacements result in a better ergonic feel.

In terms of size, the KINVOCA replacements are a little wider. As a result, the shoulder buttons are a little longer too, making them easier to press compared to what the original Joy Con have. Aside from width, the KINVOCA replacements are also thicker and have contours built along the side and at the back. These form a grip-like shape that is definitely more ergonomic. Despite the larger size, my Nintendo Switch still fits in my carrying cases even with the KINVOCA Joy Con replacements, so storage didn’t become a problem.

The heads of the analog sticks of the KINVOCA Joy Con replacements are slightly smaller in diameter. Rather than having a convex shape that curves outward, these have a concave shape that curves inward, with a thin ridge around the edge to help increase grip. These sticks also function as extra buttons, with similar travel and resistance when compared to Nintendo’s original JoyCon.

The analog sticks of these controllers feel a lot better when using them. However, they are noticeably more sensitive when using them. I actually have a harder time playing FPS games using the KINVOCA Joy Con replacements due to this extra sensitivity, so you’ll need to adjust the sensitivity settings in case you decide to get a pair of these.

The KINVOCA replacement controllers do not have the features that you expect third party controllers to miss. These cannot wake the Nintendo Switch up from sleep mode remotely. They do not have amiibo NFC readers nor an IR sensor. And these controllers have normal rumble, which can be a little on the noisy side but personally don’t bother me. Finally, these controller alternatives have gyro/motion controls that function in handheld and docked mode.

They do have a feature that is not available to Nintendo’s Joy Con – each controller can be charged even if detached from the Switch tablet via micro USB slots found at the outer side of each controller. This is a small bonus that can be significant for some who want to purchase KINVOCA Joy Con as additional controllers because a separate charging dock isn’t necessary.

The KINVOCA controllers have extra bright LED lights that shine through its cheap plastic casing that never shut off when docked. This can be a little distracting if you have your docked Switch right in front of you. It’s not a major issue, but I wonder why KINVOCA designed these controllers to behave this way.

I decided to purchase a pair of these KINVOCA Joy Con replacement controllers with several objectives in mind. I wanted controllers that I can use in handheld mode that doesn’t have drifting issues. Size was a factor as I wanted smaller controllers that fit in regular Switch carrying cases unlike Hori’s Split Pad Pro controllers. And I wanted, if possible, to have controllers that would fit better in my hands.

KINVOCA’s alternative controllers meet all these three requirements so in a vacuum, I would recommend these to anyone who is looking for similar options. I alternated using these with Hori’s popular Split Pad Pro in the past, preferring KINVOCA’s controllers especially when I needed gyro controls. Priced at $44.99 at the time of this writing, which almost half as less as what official Joy Con controllers cost as a pair. What you get at that price is worth it.

KiNVOCA’s Joy Con replacements are not as comfortable as Hori’s Split Pad Pro controllers or Dobe’s TNS-19252 controller, but those are too large for anyone who is on the road often. I strongly recommend KiNVOCA’s Joy Con replacements for people who want similarly sized controllers that have gyro controls and play often while travelling – IF they can’t get a hold of the JYS NS-191, which I reviewed here. If you know what the JYS NS-191 is and are able to purchase that, spoiler alert – get that one instead.