I asked my wife what kind of video games she wanted to play, and she described Breakout / Arkanoid, so I looked for similar games on the Nintendo Switch. I found Amazing Brick Breaker, a brick breaker game that combines mechanics from other popular puzzle games into a fresh, new experience. Today, I’d like to share our thoughts about this game. 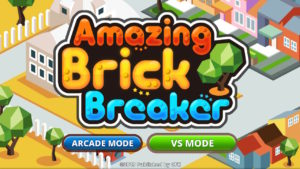 In Amazing Brick Breaker, the objective is to send a ball towards clusters of randomly placed bricks to destroy them. Instead of using a paddle, like in most brick breaker games, you shoot the ball directly. Similar to Puzzle Bobble, you can aim towards the direction you want the ball to go. Any time the ball hits a brick it bounces off, its new direction determined by the angle it hit the brick with.

Bricks are grouped in random shapes and have numbers that indicate how many times you have to hit them with the ball before they are destroyed. So you need to hit bricks multiple times before you can destroy them. To be more effective in breaking these bricks, you will need to increase the number of balls per shot attempt by hitting balls that are randomly scattered across the board. This serves as your ball “upgrade”. 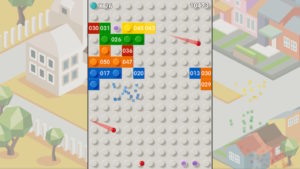 Unlike in Breakout, you don’t lose a life when your ball touches the bottom of the screen. Instead, your move ends and the whole board moves one row down like in Tetris. The game ends when at least one brick touches the bottom row. Your objective is to keep your game running as long as possible preventing the bricks from reaching the bottom by destroying them.

Like most puzzle games, the gameplay mechanics of Amazing Brick Breaker are simple. But the game is very engaging and the simple rules are easy to grasp. Unlike other brick breakers where reflexes are prioritized, Amazing Brick Breaker requires precision aiming and good use of angles. The game’s slower pace allows you to take your time and think through your moves before making each shot.

Amazing Brick Breaker only has two modes of play. Arcade Mode is played solo and is pretty much played as described above. The game only keeps track of the highest score per Switch profile, so beating that high score is pretty much your objective in this mode. 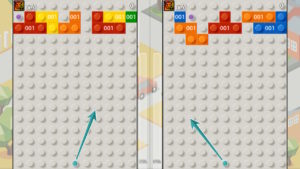 VS Mode is a local two player version wherein the players try to outlast each other. In addition to the usual defensive strategies used to destroy bricks as efficiently as possible, players have the option of offensive moves. Destroying multiple brick groups in succession is considered a combo. Doing combos makes your opponent’s bricks more durable, requiring more hits before they are destroyed.

Amazing Brick Breaker has decent graphics. The board and the bricks have a Lego aesthetic to them which my wife says makes the game feel more relaxing for her. Sound effects are decent and are properly timed to the game. There are only two musical themes available – the title screen music and the game music. Thankfully, the game music is decent enough that you won’t even notice it repeating over and over. But we did wish there were other themes available just to break the monotony.

While the core puzzle mechanics are solid and quite enjoyable, Amazing Brick Breaker is limited on content. My wife actually told me that she wished the game had unlockable content as additional rewards for good gameplay. Maybe have new music themes or backgrounds as rewards for achieving a certain high score or accumulating a specific amount of points. I was looking for a leaderboard of high scores, maybe showing the top ten or fifteen highest scores.

Amazing Brick Breaker is available on the Nintendo eShop for the price of $4.99. At that cost, I wouldn’t recommend this game due to the lack of content. We did however buy this game on sale for just $1.99. Because my wife liked the core gameplay, $1.99 is a decent price for the entertainment value that Amazing Brick Breaker has to offer. If you’re still interested despite the lack of content, I strongly advise that you wait for a sale before buying a copy.