I’ve been looking forward to Star Wars: Rebel Assault II. Despite the poor graphics and non-canon storyline, I enjoyed the first game a lot and wanted to see this franchise to the end. So I finally pulled the trigger and gave this a shot. 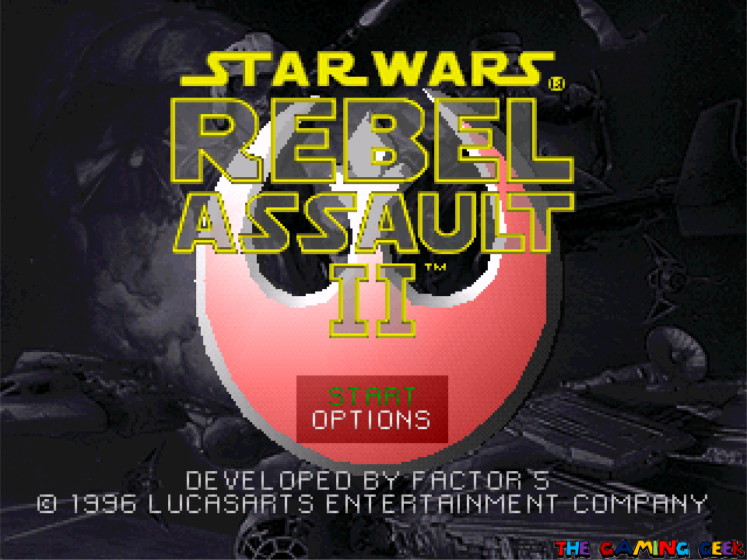 Star Wars: Rebel Assault II is a rail shooter with versions developed for PC and the Sony Playstation. The latter was developed by Factor 5 and published by LucasArts. This game continues the story of Rookie One, a pilot for the Rebel Alliance. Set between A New Hope and The Empire Strikes Back, Darth Vader and the Galactic Empire are reeling from the destruction of the first Death Star and are looking for new technology that will help them in the war against the rebels. Unlike the first game which placed Rookie One in Luke Skywalker’s spot in the canon, this game follows a new storyline that has similar beats but can easily fit into the Star Wars Trilogy. 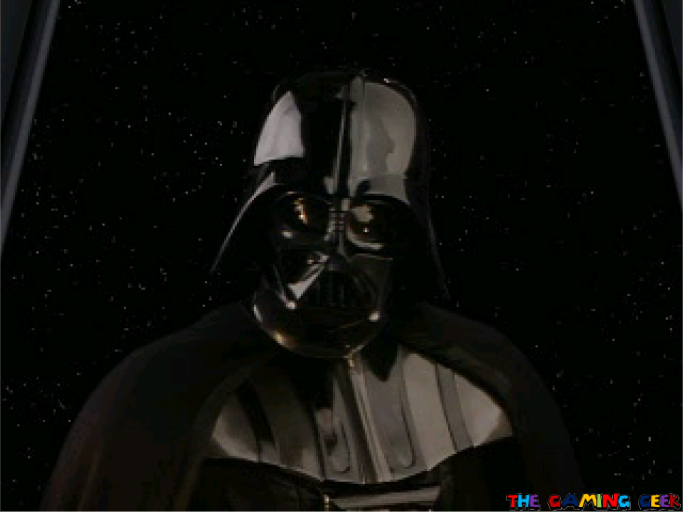 You need to thwart the plans of Darth Vader in this game.

The game is split into multiple stages. You have a health meter which depletes each time you take a hit. There aren’t any power ups in the game, so you need to ensure that your health meter doesn’t get completely depleted, which results in losing a life. You start the game with two lives but you can get more by hitting specific score thresholds. Surprisingly, the game has both a password system and a save system, and you can use both to keep your progress in the game.

There are three distinct mission types in Star Wars: Rebel Assault II. The first one is a vehicle shooter type where you’ll have to shoot down enemy ships before they deal too much damage to you. During these missions, you can switch between cockpit mode and third person mode. In third person mode, you’re essentially viewing the mission from behind your ship. 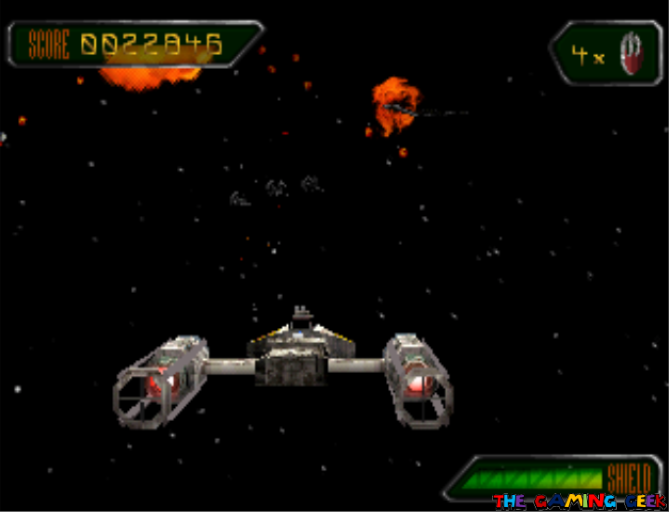 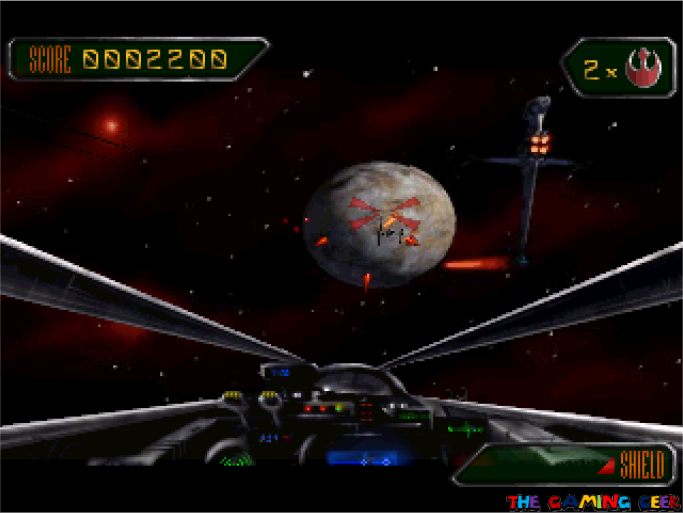 Inside the cockpit of a B-Wing.

In cockpit mode, the D-pad only controls the crosshairs. You won’t be able to dodge enemy fire but the objective becomes really simple now: shoot down enemies before they can fire off a shot. You can only shoot lasers though; there aren’t any missiles or bombs or more powerful weapons. Despite the limited gameplay, I actually enjoyed these sections in cockpit mode. 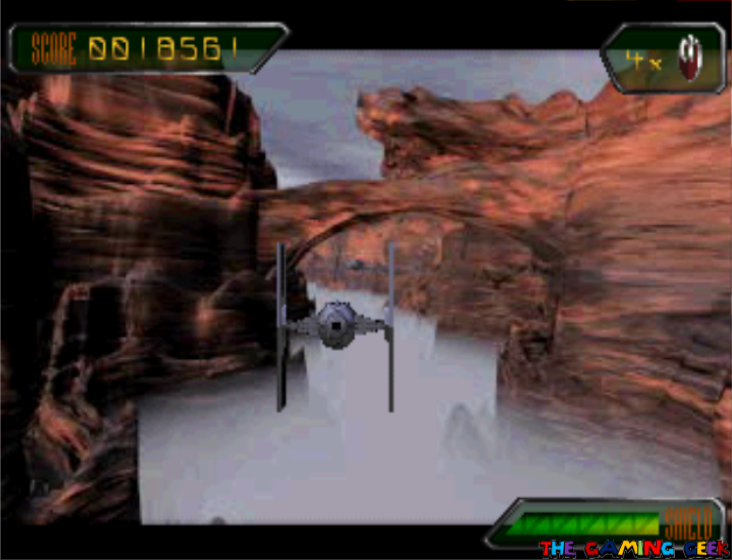 You get to pilot a TIE Fighter in this game.

The second vehicle mode looks similar, but has you locked behind your ship. In this mode, you’ll need to dodge obstacles as you travel along the predetermined path. In some of these missions, you can also shoot lasers. I also didn’t like these missions that much. 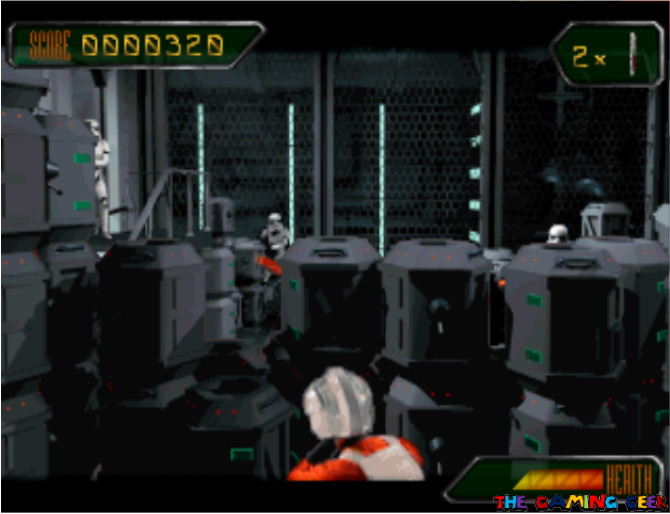 Hiding behind cover is not a cowardly strategy!

Finally, the on-foot missions make a return here. This time, there is a button that allows you to hide behind cover. These missions play almost like the Time Crisis arcade games! I also liked these sequences a lot.

A Believable Side Story

I consider myself to be a fan of Star Wars, even though I’m not at hardcore levels of fandom. The main draw of Star Wars: Rebel Assault for me is that it promised a story that’s within the world of Star Wars that revolves around new characters. And I’m glad to say that, while the premise of this game is simple and a rehash of what came before, it felt like these events could really have happened within the canon storyline.

Our protagonist, Rookie One.

You will experience the events of this story through the eyes of Rookie One, a Rebel Alliance pilot who manages to survive several engagements against Imperial Forces. Their new problem revolves around the V38 TIE Phantoms – fighter ships fitted with cloaking devices. 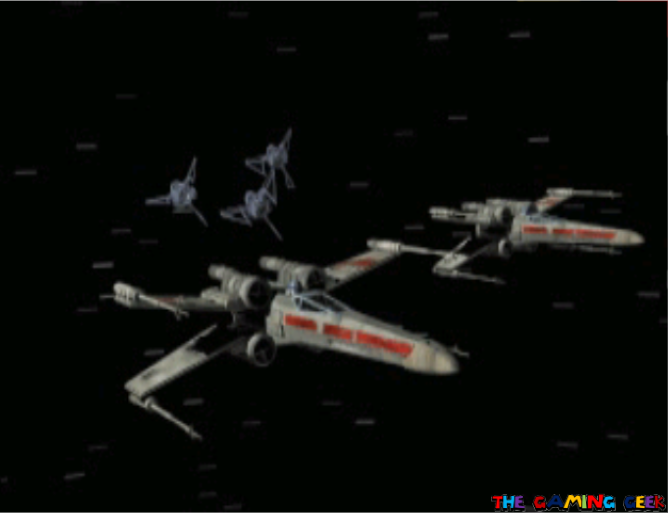 The new TIE Phantoms chasing a pair of X-Wings.

In his shoes, you’ll find yourself in a lot of different but familiar situations. You’ll have to escape an Imperial Base, travel to an asteroid field to a remote planet, destroy a suspected mining facility. You’ll even have to travel by speeder bikes, masquerade as Storm Troopers, and sit in the cockpit of a TIE fighter.

The graphics of Star Wars: Rebel Assault II surprised me. Normally, I don’t like Playstation 1 graphics. 3D polygon graphics of this era simply doesn’t look good by today’s standards. So I was glad when I saw that this game used a combination of live action video and traditional sprites. The improvement in the graphics from the first game is quite significant. Mostly, I was won over by this game’s FMV sequences. They used the same props and costumes from the original Star Wars Trilogy. It’s got a B-movie feel to it, which I’m quite okay with. 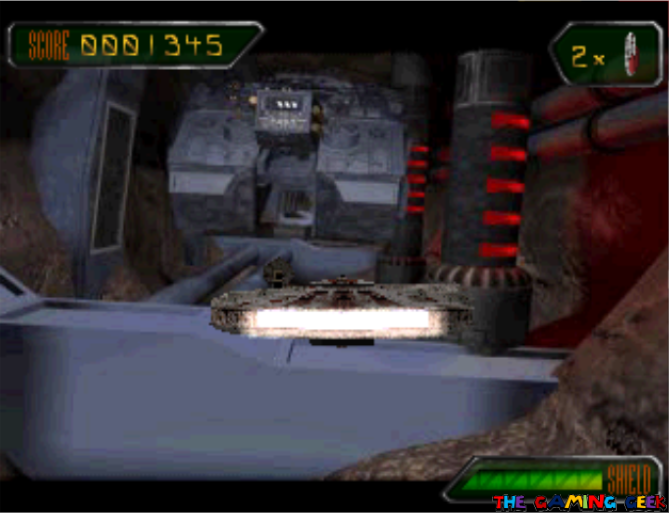 The Corellia Star is another YT-1300 Transport caught in this war.

Sound and music is really where it’s at. Since this game was published by LucasArts, they were able to use actual Star Wars film scores for the soundtrack of this game. I also loved the voice acting that plays while in the missions. The banter between pilots feels a lot like what happened in the movies. My only complaint involves the sound mix. Some of the scenes had a really low volume for the voice acting, it was hard to understand what the characters were talking about. 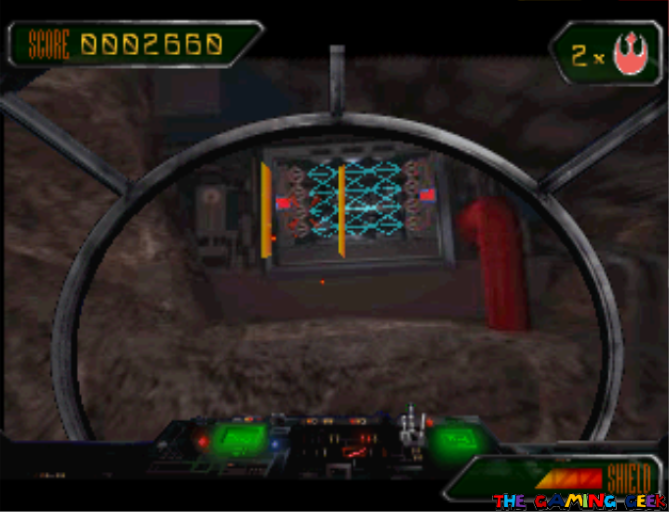 You’ll need to shoot down those red switches to disable the laser grid.

If this game had subtitles, that wouldn’t have been a big problem. Adding subtitles weren’t a standard practice back then, but if there was a game that needed subtitles in it’s cutscenes, it’s this one. Still, I’m glad that the developers went for full motion video instead of polygon-based CGI for it’s cutscenes.

I was surprised to see that Star Wars: Rebel Assault II had a lot of negative reviews when it came out. But I can see why, after playing it. This is a two disc game but there’s not a lot of gameplay to it. This is probably due to all the FMV cutscenes needing a lot of space. The gameplay itself is quite simple for a Playstation 1 game, with a lot of the missions limited to just shooting and hiding/switching views.

Despite the shortcomings, I had a lot of fun with this game. I thought the acting and the dialogue fit well with the original Star Wars trilogy. I was looking for a game that showed more heroics and adventures from that time period, and that’s exactly what I got. I’m not sure how well this game stacks up against something like Rogue Squadron though. I had enough fun to say that you should try the first level to get a feel of whether you’d like to play the game until the end.