I couldn’t help but start my playthrough of Spider-Man 2: Enter Electro as soon as I could. Normally, I don’t play sequels immediately after so that I won’t get fatigued with similar mechanics. But I enjoyed the first Spider-Man game so much, I just couldn’t help it. 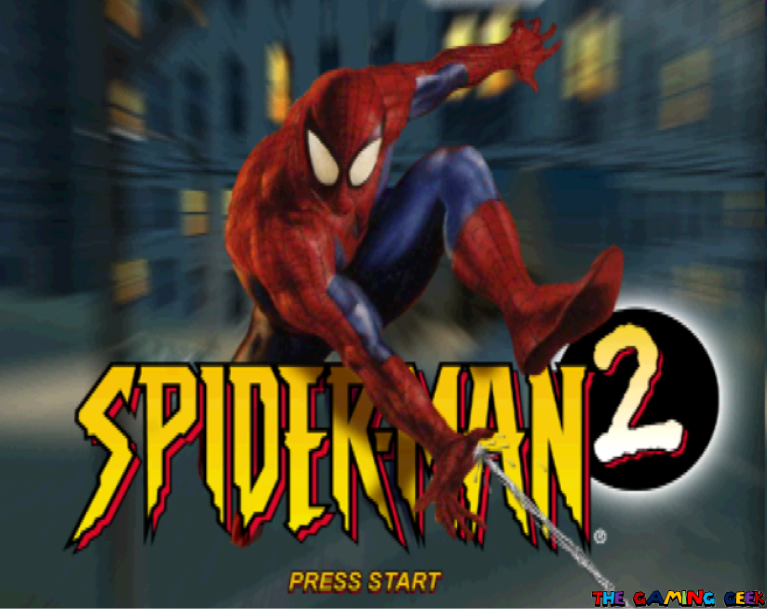 Title screen for Spider-Man 2: Enter Electro for the Sony Playstation.

Spider-Man 2: Enter Electro is a 3D action adventure game that was developed by Vicarious Visions and published by Activision. Unlike the first game, this was only released on the Sony Playstation 1. And despite being developed by another studio, this used the same game engine as the previous game. Playing as Spider-Man, this game takes place immediately after the first and even references it in the introduction cutscene. 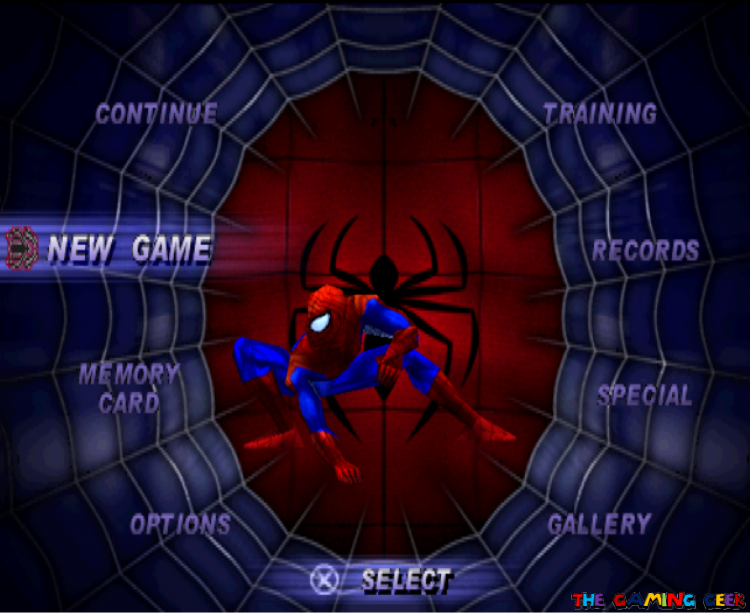 Aside from the primary single player adventure, you can also play a series of Training sessions. This time around, the Training sessions take place in the X-Men’s famed Danger Room (Beast, Rogue and Professor Xavier all make cameo appearances). There’s a ton of unlockable stuff such as comic book covers, concept art, and costumes (some offer gameplay advantages). There’s a Create-a-Spidey mode where you can customize his powers and costumes, and a Level Select mode where you can replay any stages that you’ve already beaten, including boss fights. 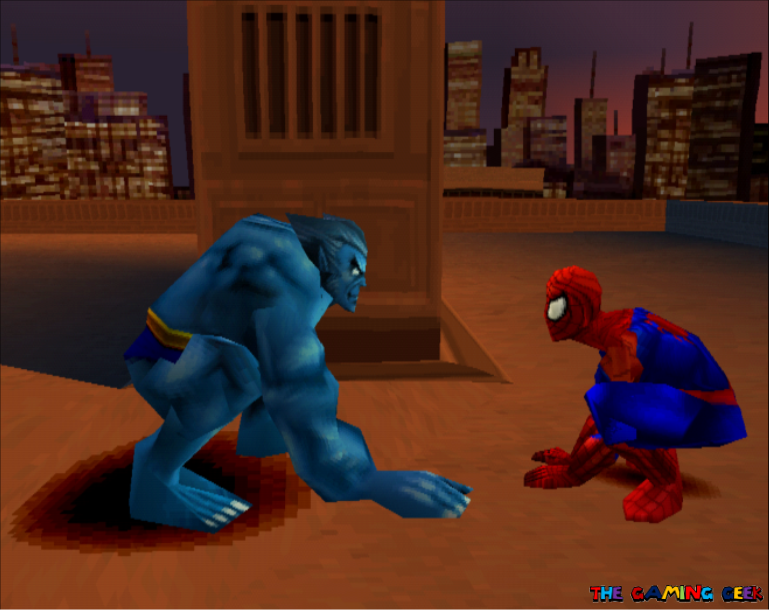 Beast will teach you the ins and outs of the game.

This game also does away with lives and continues. You’ve got a health meter and if it is depleted, you lose the level. You can also lose a level if you fall into a pit or get caught in an instant death trap. However, you can keep repeating that level as many times as you need. The game also has a save system with up to eight save slots. You’ll be prompted to save after every boss fight, but you can save your progress manually in the main menu.

Spider-Man 2: Enter Electro maximizes the Playstation 1 controller’s buttons. Square is for punching and circle is for kicking. Tapping either button quickly still results in a three hit combination. I think kicks hit a little bit higher; there were some enemies that I could only hit with kicks. Spidey still doesn’t have a jump kick, and he retains his dive punch if you hit square in mid-air. 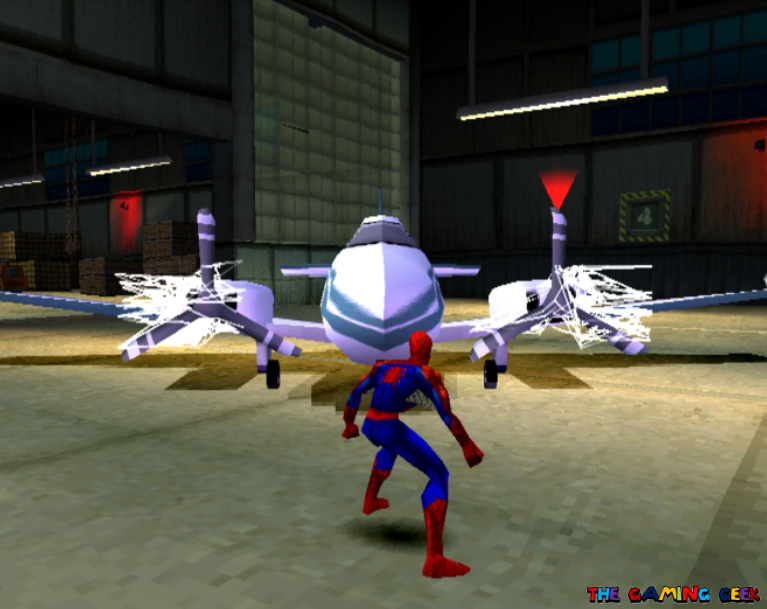 You can web up enemies and some objects in this game.

The X button jumps, and the triangle button is for webbing-based moves. Pressing triangle alone shoots a web-line straight forward. Press it with left and you form web gloves that increase the damage from your punches. Press it with right and it forms a web-dome around you. With the up button, you shoot “impact webbing” which is a spherical projectile. And with down, you can do a web-yank that can pull objects in a direction of your choice. 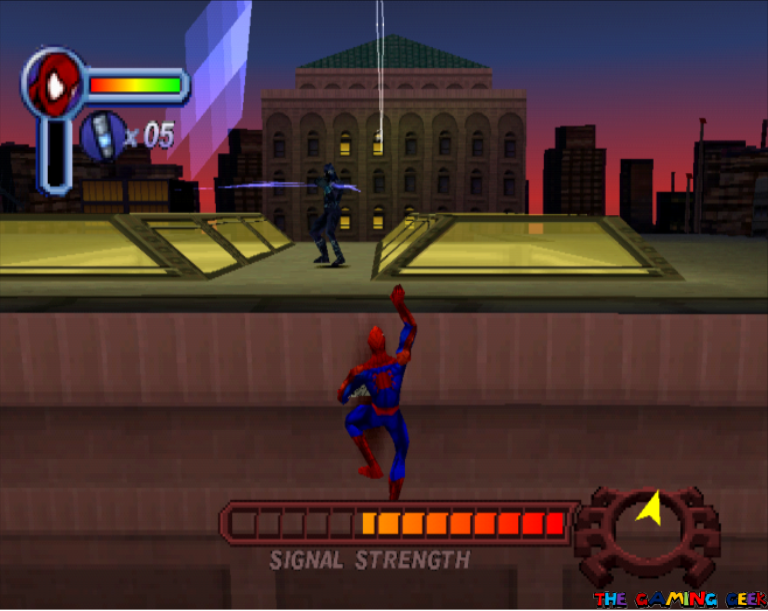 You can still see the web-line after I swung to this wall.

The left shoulder buttons are for targeting. L1 allows you to aim crosshairs; this works with impact webbing or normal web-lines. L2 auto targets, but I had trouble using this effectively. R1 shoots a zipline that moves you immediately to a ceiling above if it’s within reach. And R2 either does a web swing or a zip-line to a nearby wall. 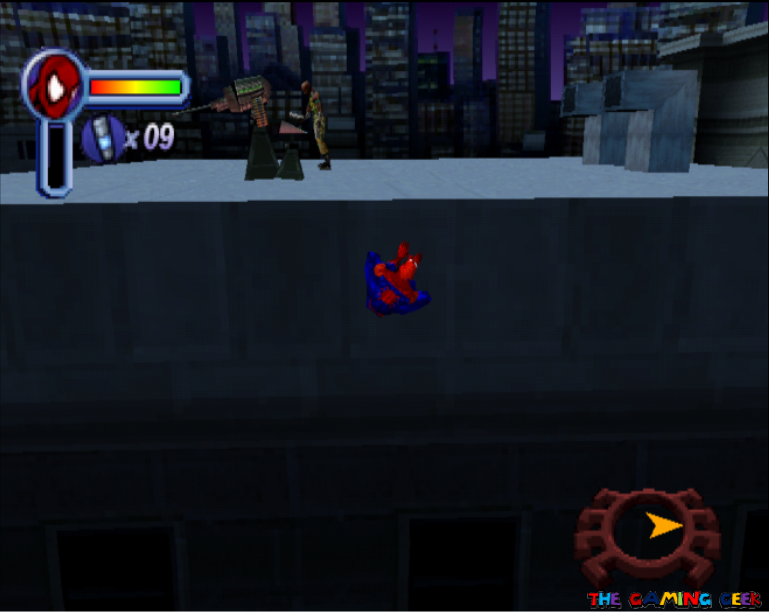 Spider-Man can also crawl up walls and ceilings quite easily. Just jump toward a surface and you’ll stick to it. You’ll need to pause a bit when changing surfaces, to let the camera reorient itself properly. All these moves represent Spidey’s powers quite well and translates effectively to 3D gameplay.

Differences from the First Game

Unlike the first Spider-Man, I didn’t feel the same level of variety in the missions of Spider-Man 2: Enter Electro. This game had more of the standard levels wherein you need to explore an area and complete certain objectives. Some examples of these objectives include rescuing a specific number of hostages, destroying some objects or devices, or defeating a certain number of enemies. There’s even a bit more puzzle-solving, which is a welcome change. 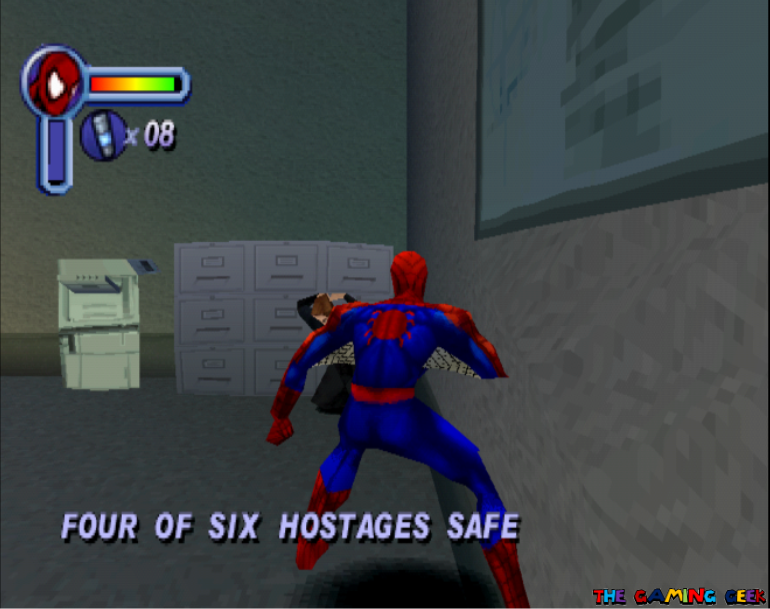 Your typical “rescue the hostages” level.

One thing that I really felt in this game is an increase in “sticky situations” where you have to act quickly. Be a step slow and you fail the level. There’s one sequence where you have to knock away objects in the path of a small plane that’s about to take off. If the plane takes too much damage, you lose. Another sequence has you chasing after a train, but Sandman is trying to slow you down with sand walls. 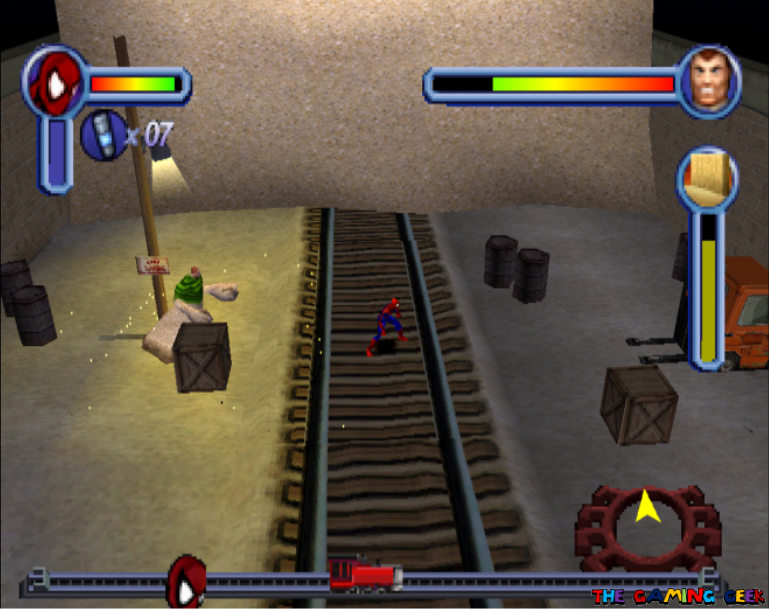 Don’t let Sandman slow you down!

Despite using the same game engine and having a similar move set, the mission design made this game play a lot differently. Looking back, this game’s levels are much shorter but because you had the tendency to fail more frequently, your play time increases.

What I really look forward to when I play these superhero games are the boss battles. These are the times when I really feel like the superhero I’m playing as. I have a few complaints about this game’s bosses but for the most part, I was really satisfied. I love the supervillain selection: this game has you fight Shocker, Hammerhead, Sandman, the Lizard, and Electro. 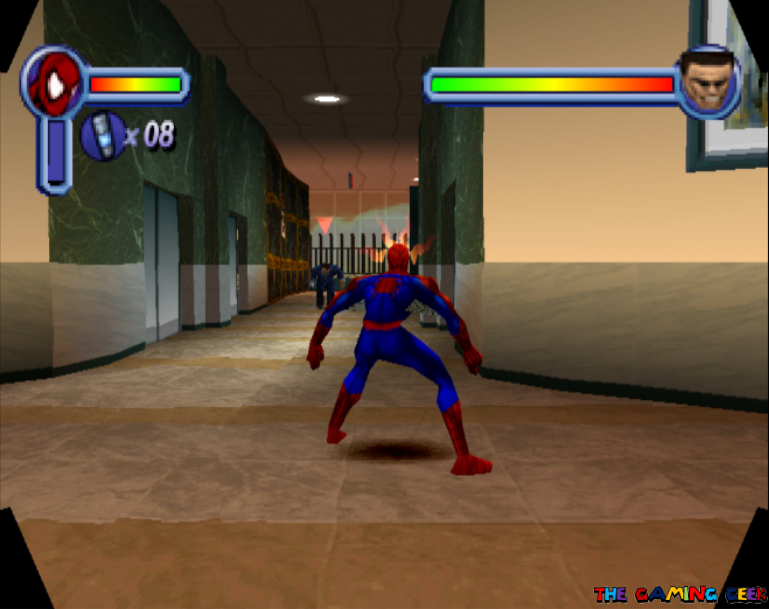 My first issue is with the web yank move, which you’ll need to use to defeat two of this game’s bosses. This move is executed by pressing the triangle button and down. If you press down too early, you’ll end up turning around and away from the boss. If you press triangle too early, you’ll end up shooting a regular web-line. This makes some boss battles harder than they had to be. 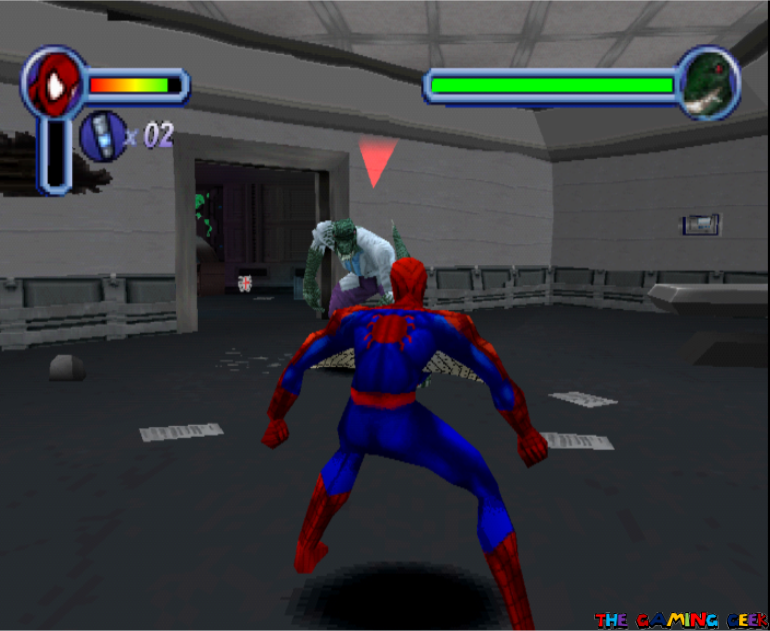 You’ll also feel the effect of the game’s lack of camera controls. The previous game was designed around this limitation, but here it feels like the developers forgot that we can’t actually control where the in-game camera is pointing towards. There are frustrating moments when you’ll face the wrong way and lose track of your enemy. 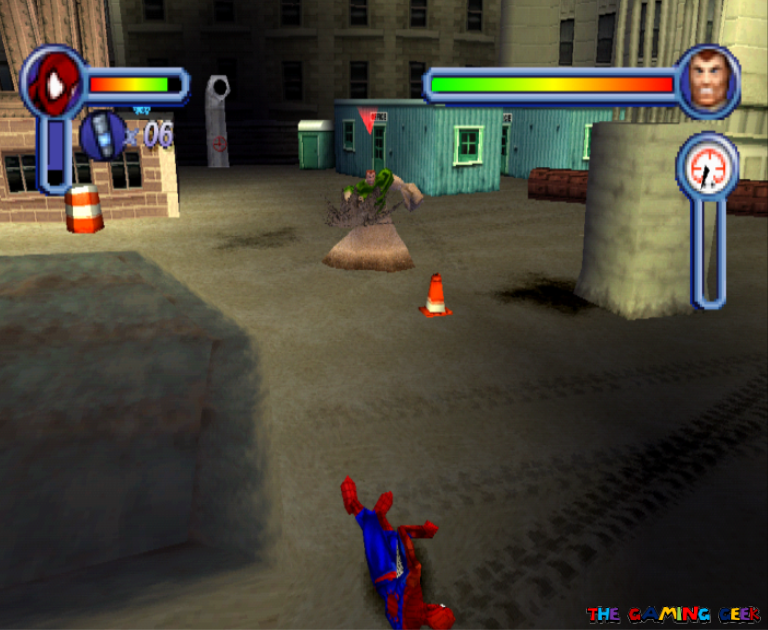 Sandman also makes an appearance in this game.

These flaws are more on the game’s design, however. The boss design is actually really good. Each boss behaves faithfully to how they are in the comic books. And the way you’ll need to defeat each one also feels comic book accurate. So when you fight them, it’ll actually feel like how Spidey fights them. And the final boss fight with Electro gave me that special third act feel that I get when watching today’s superhero movies!

Frankly, games from the fifth generation of video games fail to appease me visually. These old polygon graphics just don’t hold up well. And the same can be said for the graphics of Spider-Man 2: Enter Electro. Models and environments are just blocky or squarish. I will say that this game looks better than its contemporaries thanks to most characters in the game being in costume. 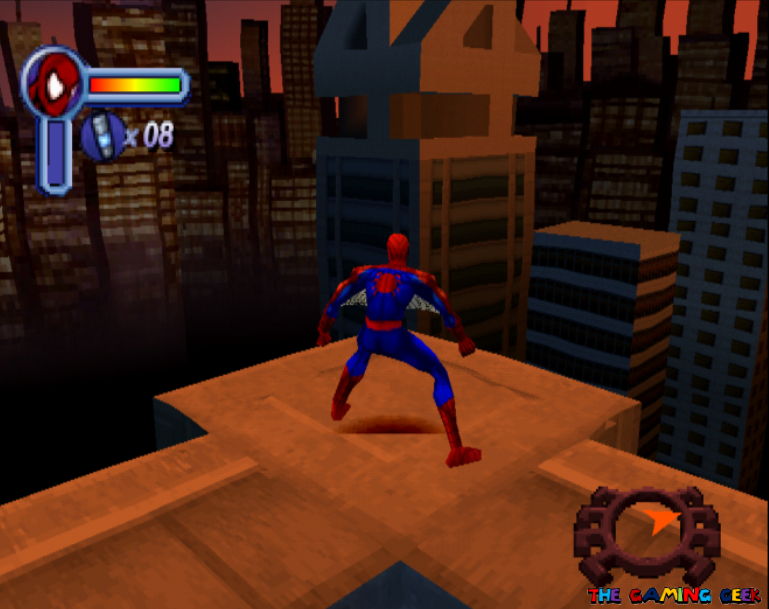 You can still see the Four Freedoms Plaza at the beginning of the game.

The game has really good sound design, especially the voice acting. Although when I looked it up, I was surprised that they only hired four voice actors this time around. The game’s themes are really good but they don’t dominate the experience. They’re great accompaniment to the action that is happening, but they don’t stand out enough for you to remember after playing. 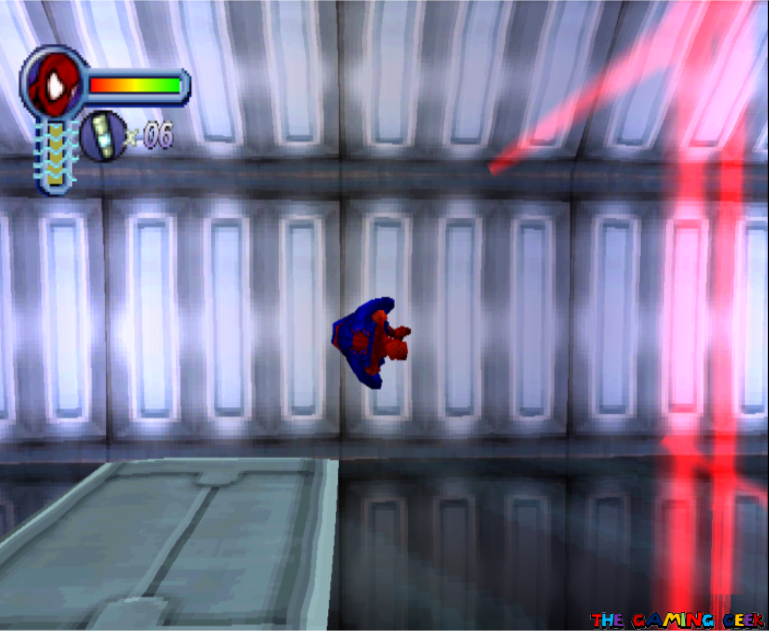 You’ll need to find your way around these security lasers.

As for presentation, this game has the same bells and whistles as it’s predecessor. It has several well-written cutscenes that help the story flow as you progress through the game. A few improvements in the HUD can be seen, such as separate meters with different functions (e.g. the train chase with Sandman). Most importantly, Stan Lee still lends his voice for this game’s narration.

As a sequel, Spider-Man 2: Enter Electro doesn’t bring a lot of significant improvements or innovations. But this isn’t necessarily a bad thing. This game is simply more of what the first game brought – amazing Spider-Man action. If I compare this to the first game, I can’t say that this is better. In fact, it’s a little bit worse due to the camera control issue becoming more apparent.

But the first game set a really high bar. This game is still pretty good and quite fun, even if it’s not as amazing as the first. And this changes up the gameplay enough that I would even recommend playing this immediately after beating the first. And if you liked the first game, there is no reason for you to skip this sequel. I just wish that this was ported over to the Dreamcast too. A version that’s slightly remastered would have been great to revisit.