I picked up Harry Potter and the Sorcerer’s Stone for the Playstation 1 because I had heard that it was the first Harry Potter film’s 20th anniversary. I’ve seen the films but I’ve never read the books, and I’ve never played any of the Harry Potter games before. I tried the Sorceror’s Stone on Game Boy Color but got stuck because of a game breaking glitch, so I decided to check this out instead. 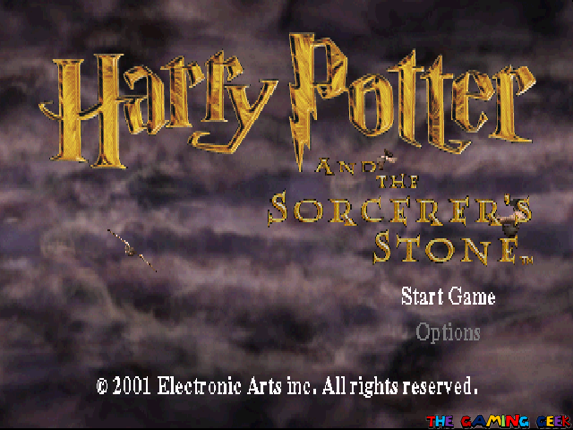 Title screen for Harry Potter and the Sorcerer’s Stone for the Sony Playstation 1.

Will someone who isn’t a fan of the Harry Potter franchise be able to enjoy this game? Let’s talk about it today.

Harry Potter and the Sorcerer’s Stone for the Sony Playstation is a 3D collect-a-thon platformer that was developed by Argonaut Games and published by Electronic Arts. I’m not exactly well-versed but it appears that this game is based on the Harry Potter books and not on the films, primarily because the characters do not resemble the actors that played their roles. Although I do remember seeing the events of the game play out in the films. 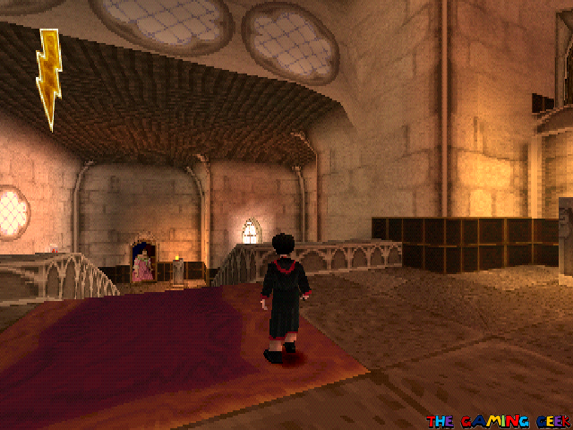 In the game, you take on the role of Harry Potter and relive his early experiences at Hogwarts. You’ll be able to explore the wizarding school and take on different quests, helping out the characters with various tasks. Occasionally, you’ll be able to attend different magic classes where you’ll learn a new spell. 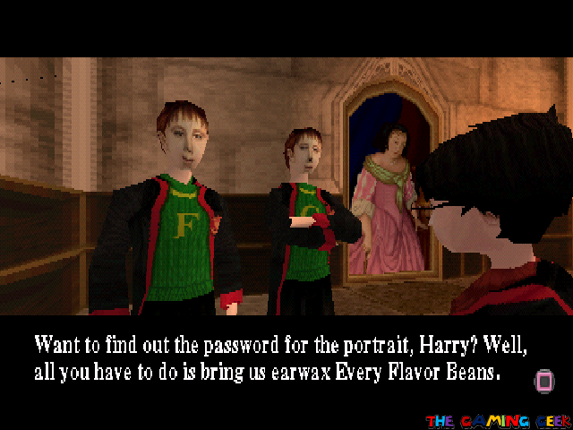 These two will ask you to collect different colored Every Flavor Beans.

The collect-a-thon aspect comes mostly from collecting Every Flavor Beans scattered across Hogwarts. These come in four colors, and when you get enough of one color, you can talk to Fred and George to get a password that will lead to to more collectible items. You can also obtain Famous Wizards and Witches Cards for your Folio Magi, to get some more lore of this world.

You’ve got a Health meter in this game, and you get knocked out when you run out of health. You technically don’t have a number of lives in the game. Whenever you get knocked out, you can choose to continue from the most recent checkpoint or to quit the game. The game has a save system, but you can’t save your progress anywhere. You’ll need to look for the game’s save points, which look like red glowing books.

The gameplay mechanics of Harry Potter and the Sorcerer’s Stone is pretty simple. The D-pad moves you across the 3D plane. During boss fights, you’re locked to facing one direction, and the D-pad adjusts accordingly, with the left and right directions making you strafe and down making you step backward. Jumping happens automatically: moving towards a gap will make you jump over it, and moving against a short wall will make you jump up and grab it’s ledge if it’s within reach. 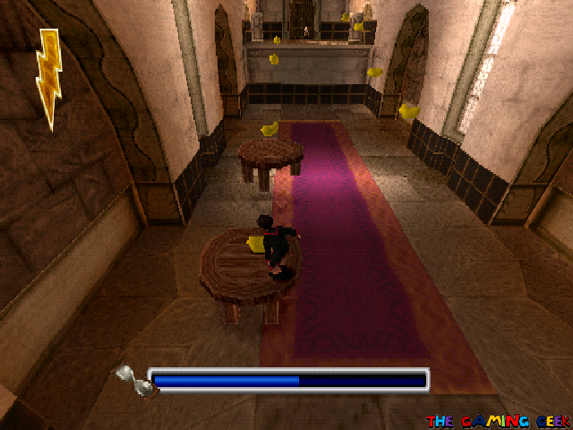 Hopping across these tables happens automatically; you just have to move toward the table you want to get to.

The Square button interacts with objects, such as doors and people. The Circle button cancels out any cancellable action or backs out from a menu. The X button is your spell casting button, and spells are automatically selected based on your current situation. Most of the time, this button triggers your Flipendo spell which knocks back objects or serves as projectile attacks against enemies. 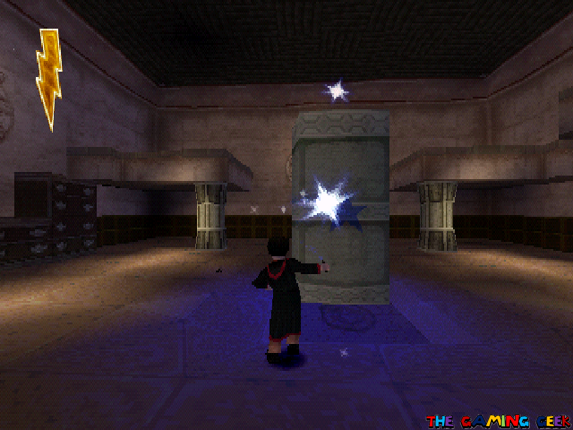 You will often use the Flipendo spell in this game.

The Triangle button changes the game to a first person perspective, allowing you to take a good look at your current surroundings. Harry Potter won’t be able to move though, so you’ll have to go back to the normal perspective to proceed with the game. You can shoot your Flipendo spell while in first person mode; this will allow you to aim your shots with more precision.

I was looking forward to how spellcasting would be implemented in Harry Potter and the Sorcerer’s Stone. Well, I’m sad to report that I am quite disappointed. As mentioned earlier, spells are automatically selected based on your situation. Aside from the puzzles being very obvious, there’s not a lot of thinking involved as you deal with them since the game automatically chooses the needed spell for you.

For example, the second spell that you will learn in the game is “Wingardium Leviosa”, which levitates objects. Objects that can be levitated in this manner will have a yellow spark above them. Aside from one or two objects, the only objects that you can levitate are ones that you’ll need to levitate to progress. So you can’t use this spell outside of those situations. 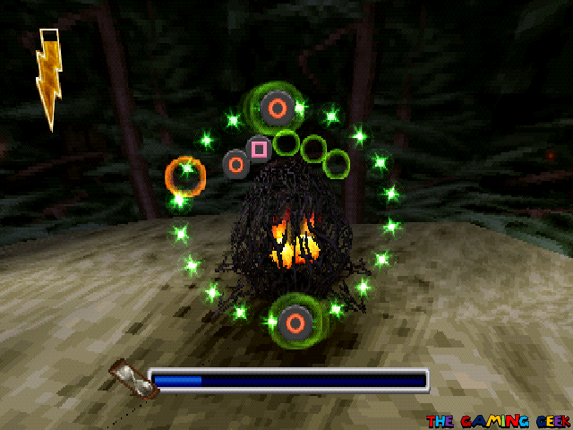 You’ll learn similar spells such as “Verdimillous” which illuminates dark areas and reveals hidden platforms, or “Avifors” which brings bird statues to life and frees up floating tables. It’s neat to hear Harry Potter cast these popular spells, but when you can only use them at predetermined times and not any time you want, it gets boring fast. The only spell that leads into anything different is “Incendio”. After you cast it, you’ll need to play a timed button sequence minigame.

Harry Potter and the Sorcerer’s Stone has a minigame that I thought had a lot of potential. Very early in the game, you’ll go to broomstick flying class. Later on, you’ll start taking Quidditch lessons. In Flight mode, the X button is for acceleration and the D-pad is for steering. 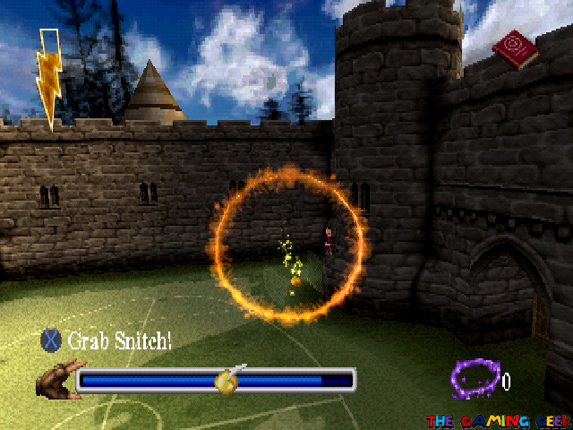 You need to be able to catch the Snitch before the time runs out!

The controls during the flight sections are pretty responsive. The problem is, you’re just flying around a really small space. Catching a snitch during Quidditch (whether practice or in an actual game) involves chasing after it and hitting these large rings that it emits. Once you get enough rings, you’ll need to catch the snitch within a given time limit. This is simply done by pressing the X button at the right time.

The most entertaining aspect of Harry Potter and the Sorcerer’s Stone are the boss battles, and I’m surprised that there were quite a lot in this game. A few of them are against Draco Malfoy, the first of which even has Crabbe and Goyle assisting him. The Draco encounter that I really enjoyed is chasing after him on a broomstick. 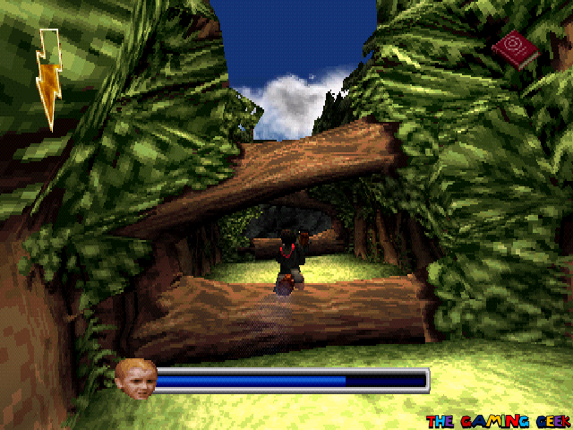 You’ll need to dodge obstacles and Draco’s attacks while chasing after him.

While not necessarily a fight per se, the encounter with Fluffy is quite memorable simply because of having to face three huge dog heads. What you need to do isn’t even that hard, to be honest. 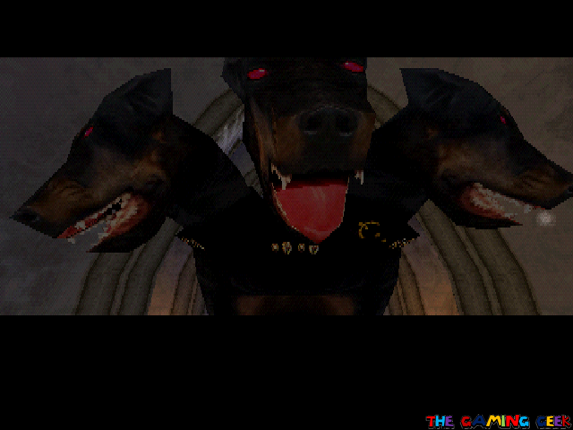 Do you have what it takes to beat Fluffy?

The encounters with the troll is also quite fun. During the first encounter, it will chase after you, What makes this sequence memorable is the perspective. The troll will be coming from the background, and the path leads towards you (the player). So all that time, Harry Potter is running towards the player. You won’t see the obstacles in your path right away, so I can imagine players needing a couple of tries before they get through this. 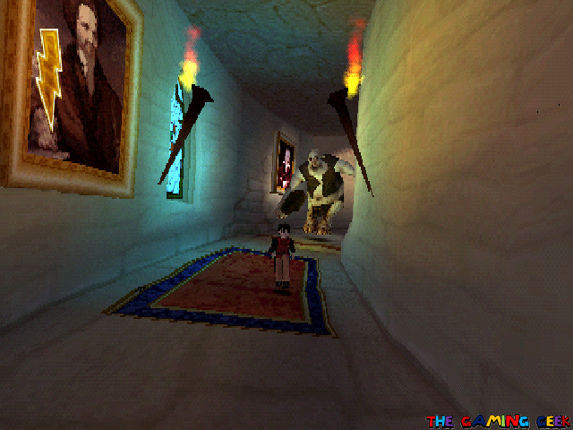 The troll kind of looks like Shrek, doesn’t he?

I won’t spoil how the final boss fight went, aside from it being easy. But I like the way it was set up, and what you needed to do in order to beat the final boss.

Man, oh man, Playstation 1 games just don’t age well, do they? The worst thing about Harry Potter and the Sorcerer’s Stone is it’s graphics. I guess the developers were doing their best with the kind of technology that was existing back then. But this game doesn’t look good when viewed today. The graphics are serviceable when indoors, but when you’re outside, the concessions are obvious. You’ll see walls made up to look like bushes, with leaf and bark patterns. 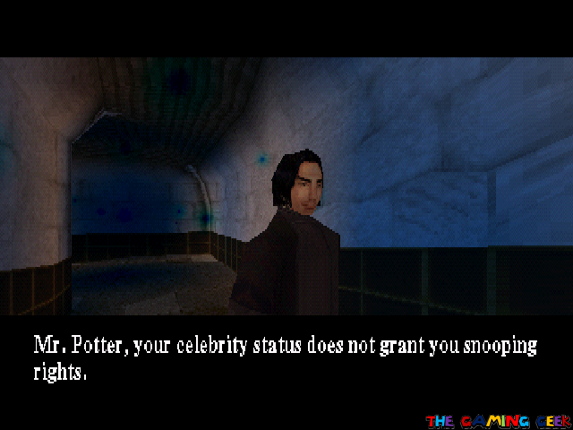 Severus Snape looks like someone cast the Cruciatus Curse on him.

But the worst part about the graphics are really the faces of the characters. I don’t know how much better the developers could have done. Sometimes, you would see nicely drawn static illustrations for the game’s cutscenes. These were quite few, I almost forgot that they were in the game. Maybe they should have opted for more of these static illustrations instead of using the game’s 3D models. 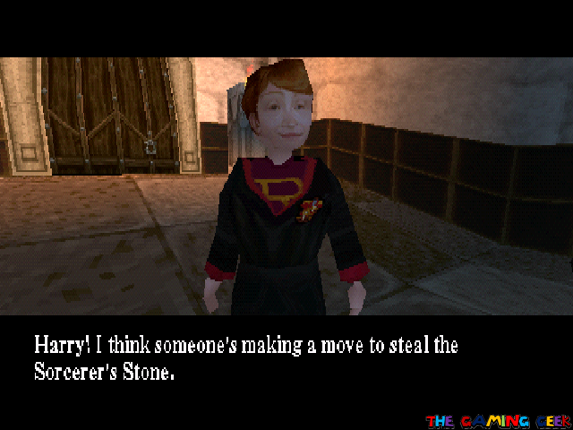 The game’s sound design makes up for this somewhat. The music of the game is decent and they make use of the Harry Potter main themes a lot. What really stands out for me is this game’s voice acting. I don’t think the developers were able to get the actors from the film. But whoever did the voices here sound like they do. So even if Ron Weasley looks like E.T. at times, hearing them talk helps immerse me in the game again.

I’m glad they used an illustration of this moment.

As for presentation, this game is quite bare, to be honest. There aren’t any fancy menu screens, and the HUD barely shows you anything. This game definitely needed more effort in terms of adding flair and polish to it.

As a game, Harry Potter and the Sorcerer’s Stone for the Playstation 1 isn’t much. It’s too simple, isn’t very challenging, and is actually quite short. If I didn’t adjust my perspective, I wouldn’t have enjoyed this game. But going into this, I knew that the target audience would be young kids who might not be good at video games.

I also recognize that you’re not playing a game like this because you want to play video games. You’re playing these licensed games because you want to recreate or relive specific experiences. And this game was effective in reminding me of the key moments of the first Harry Potter movie.

So, yes, if you’re a Harry Potter fan and you want a more interactive way of revisiting the franchise, this would be a good choice. If you can accept the game’s crude 3D graphics, that is.