I’ve had a few posts about Asphalt 9: Legends on this blog, but I don’t think I’ve really talked about why I still play this game. And I don’t think I’ve ever had a day wherein I wasn’t able to log into this game. I’ve spent almost ten times more time on this game than I have with Mario Kart 8: Deluxe, even though the latter is a better game (critically speaking). I don’t even like driving games, to be honest. So let me tell you the reasons why this game has me hooked. 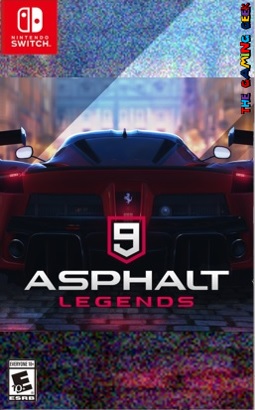 Asphalt 9: Legends is a free-to-play driving game developed by Gameloft Barcelona and published by Gameloft for the Nintendo Switch. This game is also available on iOS, Android, Windows, Mac and XBox. I’ve only tried the Switch version though, and this post will refer to that version.

Because this is a free-to-play game, there are limitations to it. You’ll start the game with only one car. And cars have a fixed number of uses. Once that run out, that car will have to “refuel” or go through a cooldown period. This isn’t as bad as it sounds – most Rank D cars can be used five to six times before refueling, and refueling takes between five to fifteen minutes. I definitely felt this at the start, but once I managed to unlock four cars, I just switched between them. 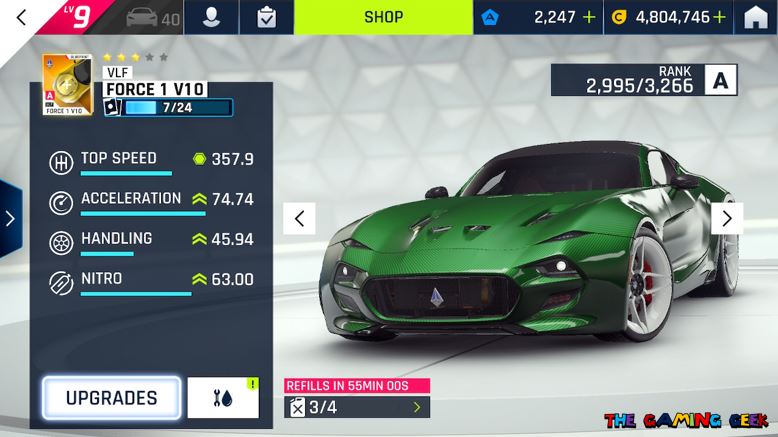 The VLF Force 1 V10 is a Rank A car that can be used 4 times before refueling, which lasts 55 minutes.

You unlock cars by collecting cards, and you get cards by purchasing them or as rewards. Some specific cards can be purchased from the in-game store. You can also buy or earn card packs which will have random cards in them. The higher ranked a car is, the harder it will be to get cards for them. 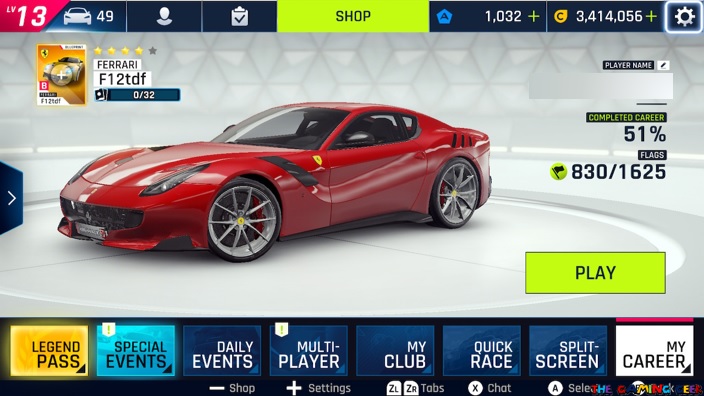 You can access the different modes of play from the Main Menu.

There are many different races in the game. Most of them are online, and some are restricted to certain Ranks, car ratings or even to specific cars. The more cars you unlock, the more races you can participate in. It might be limited at the very start but options will open up the more you keep playing the game.

So let’s dive right into the reasons why I’m still playing Asphalt 9: Legends. The first big reason is this game has an offline mode. I’ve tried a few free-to-play games on the Nintendo Switch and most of the ones I tried could only be played online. This means that, I won’t be able to play those games anywhere – I’ll need a good internet connection to do that. And that goes against what a Nintendo Switch is about. 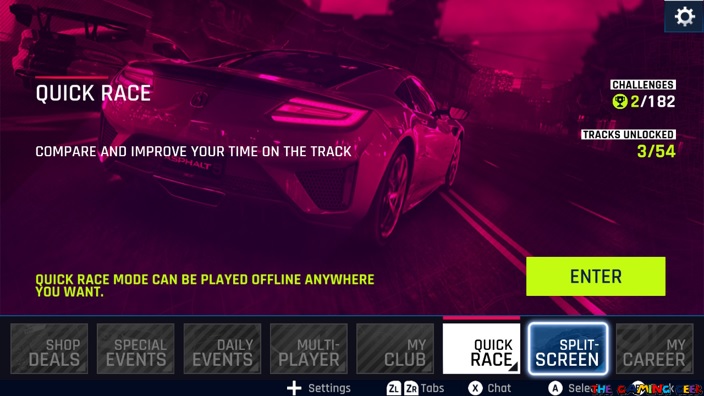 The single player Quick Race mode has plenty of tracks to unlock and challenges to accomplish.

More importantly, I’ve learned to stay away from online games because when the developers turn off their servers, any progress that you made in that game flies out the window. But not in this game. You see, any cars you unlock in the online modes, they are unlocked in the game’s offline modes. When Gameloft decides to move on from Asphalt 9, I’ll still be able to participate in races using the cars I’ve unlocked. 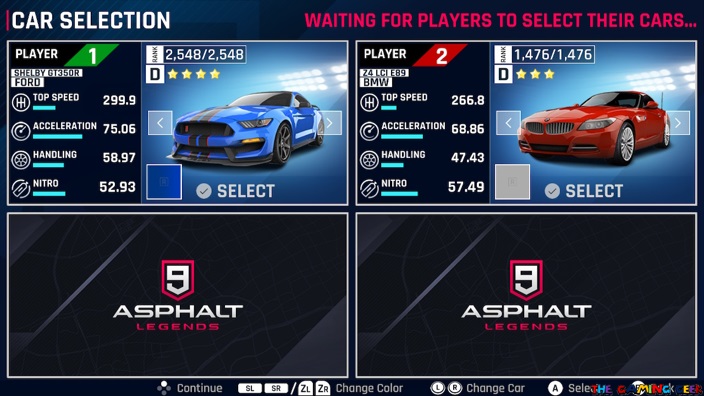 You can play Split Screen multiplayer with two to four players on a single device! Just make sure you have enough controllers!

And the game’s offline modes are decent too. The Quick Race mode is a more streamlined version of My Career wherein you get to race on the game’s many tracks. Completing Challenges unlocks more tracks, and there are a total of 54 tracks to unlock. Split-Screen mode is a single Switch mode wherein two to four players can complete on the same screen. This has been one of my go-to options for when we have visitors, as an alternative to Mario Kart 8: Deluxe.

The Daily Grind is Flexible and Manageable

Like most free-to-play games, Asphalt 9: Legends also feature tasks that you have to complete daily. These tasks don’t really take a long time to complete. These are your daily goals: 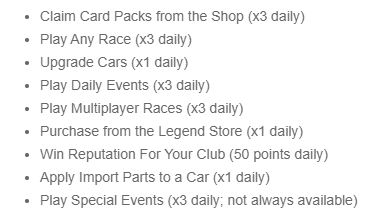 Each goal you complete, you get 5 Tokens. When you complete six of them in a day, you can get a card for the Lamborghini Asterion, which is probably going to be the first Rank B car that you’ll be able to unlock. Once you’ve fully upgraded the Asterion, completing six goals daily earns you 15 Tokens as a reward. You can use these tokens for buying more cards and card packs in the in-game store.

On my busiest day, I just login to claim the Free Card Pack (you get one every four hours), do a car upgrade and apply an import part. That’s 10 tokens and a free card pack for just logging in. If I can log in two more times that day, I’ll claim two more free card packs and get 5 more tokens.

If I have more time, I’ll play in at least three Daily Events. That also gets me the Play in any Race goal. Races in Asphalt 9 don’t take a lot of time. I think it usually takes me ten to fifteen minutes to complete this. And this gives me an additional 10 more tokens. If you’re in a club, you’re also guaranteed to get the Reputation Points.

This game’s daily goals are quite easy to do and not very time consuming. And I’m able to use the tokens to buy more cards, card packs, and upgrade items. Great rewards for reasonable effort!

The Club System Motivates Me to Play

Asphalt 9: Legends has a club system that rewards active clubs and members. For example, you can get club rewards from some races if a certain number of club members participate. I’m currently the leader of a reasonably active club. Because of certain members, I sometimes get rewards from races that I don’t take part in. 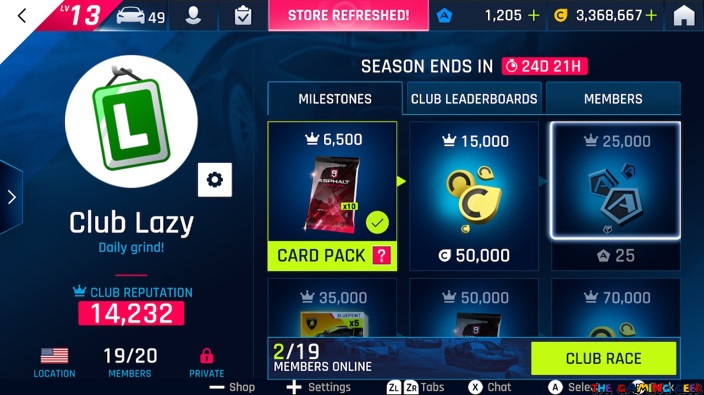 Each season offers a different set of rewards for Asphalt 9: Legends clubs.

The required amount of reputation points is quite high and hard to attain by an individual without putting in a lot of play hours. So I’m quite fortunate to be part of a club that’s active enough to get a couple of these club rewards. It wouldn’t feel good if I just free-loaded and didn’t contribute to the club, so whenever I do have free time, I do a few extra races each day to earn extra reputation points.

What I really like about Asphalt 9: Legends is it’s so quick to get in and out of. Prior to the Covid-19 Pandemic, it’s easy for me to fit in my daily routine. I’d do a couple of races before I set off for work, and do another couple of races when I get home later. The game doesn’t need to take up a lot of my time.

The Covid-19 Pandemic made the game even more accessible to me, as I was fortunate enough to be approved for a work-from-home set up. The Asphalt 9: Legends day starts around the same time that I wake up. I can start working on the daily goals just before or after having breakfast. And the game’s races are so fast, sometimes I do one or two during my work shift while waiting for a meeting to start. I can usually do one race while waiting for all my emails to download. 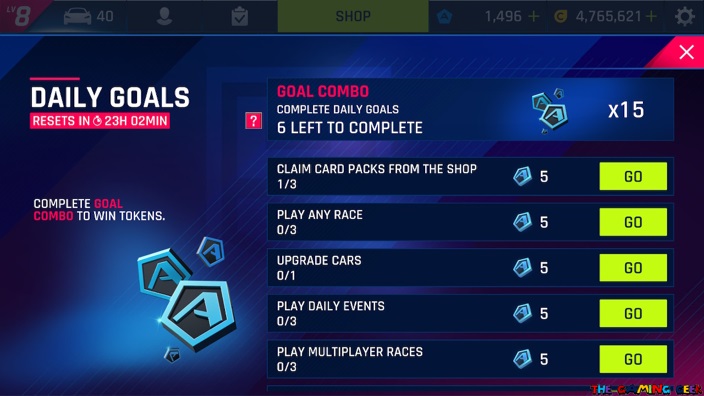 The Daily Goals reward you for simply playing and won’t ask you to win races – which will be hard to do when you’re just starting.

Unlike other games, racing games lend themselves well to multi-tasking because they’re not verbal. You really just have to react to the road and to other racers. Did you notice that the Daily Goals don’t refer to winning races? So even if I lose in these races, I still get credit for them. I still get rewards just for playing the game, which takes off pressure to be good at the game.

I don’t even like racing games, but I’ve already spent 390 hours on Asphalt 9: Legends since it’s release on the Nintendo Switch. I was hooked with how the game rewarded players who play it, never making me feel like I needed to sacrifice a lot of my time just to keep up with the game. More importantly, my Asphalt 9: Legends account now has dozens of unlocked cars.

Anyone who likes racing games should give this game a try. It’s free! All you need to play it is an internet connection and an open mind. Any time you spend on this game will earn you more cars to play in the offline modes, without costing you a single penny. If you’ve got a Nintendo Switch, give this game a try!