One of the reasons why I wanted to revive my blog is because I wanted to write about Nine Parchments. It’s a hidden gem on the Nintendo Switch that people rarely talk about. So now that I’m writing again, I finally have a chance to talk about this game. 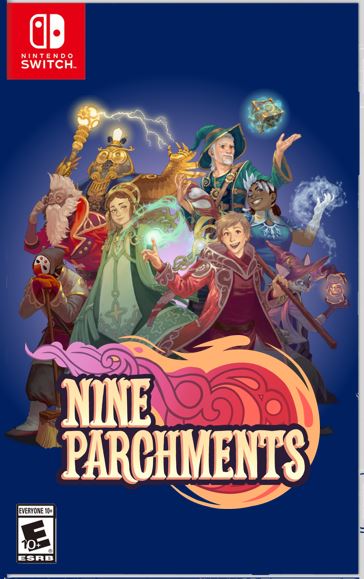 Nine Parchments is an adventure game for one to four players where you play as students at the Astral Academy. They want to add more spells to their spellbooks, but an accident resulted in all of the Academy’s spell parchments to be blown away. Scattered across the land, these students took it upon themselves to retrieve these parchments, hoping that this feat would earn them the right to graduate from the academy.

At the start, you only have two students to choose from, but you can unlock an additional seven. This roster includes Trine’s Amadeus, as well as Trine 4’s Prince Selius. The game plays like a twin stick shooter but instead of shooting guns, the characters cast spells. You will then need to fight your way through a variety of dangerous flora and fauna as you travel to the end of the stage. There is friendly fire though, so everyone needs to be careful with where they are aiming before letting their spells fly.

Each character has four different variants, with a different set of three starting spells. As you find spell parchments, you can start adding them to your spellbook. The short video below shows a good illustration of how spell selection and use works:

There are no “lives” in the game; anyone who “dies” will revive eventually for as long as there are others still alive. Other players can make this faster by standing nearby the “dead” wizard’s body. Once everyone dies, a Last Chance mechanic will revive one player at random. In single player games, Last Chance triggers immediately when you get killed as there are no other players.

Slinging different kinds of spells may seem simple, but Nine Parchments offers it’s challenge through it’s Element system. Essentially, your magic spells are infused with one of six different element types: Fire and Ice, Lightning and Steam, and Life and Death. The different creatures and plantlife that oppose you can have resistances and even immunities against these elements.

In later stages, you will encounter enemies with resistances and/or immunities to more than one element. As you find new parchments, you can choose to add one from a selection of three random spells. Choose wisely! You will need to have at least one spell for each element by the end of the game to allow you to deal with all types of creatures. 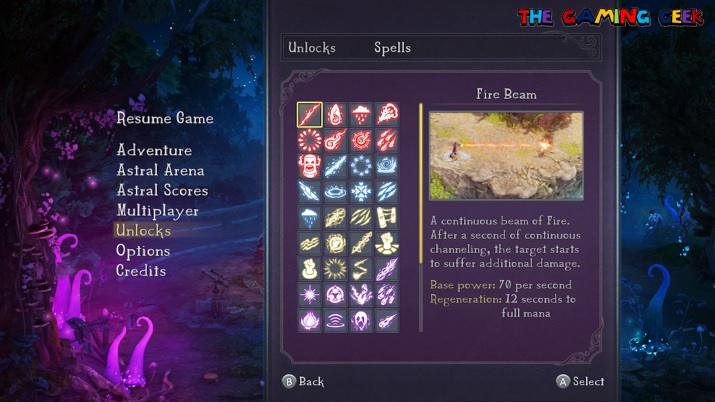 There are a lot of different spells to choose from in Nine Parchments. You’ll be limited to a random selection per playthrough though.

Nine Parchments doesn’t have much of a plot, outside of what I already mentioned above. Each character does have some snippets of dialogue throughout the game, which can differ depending on their Mood (you can change this in the settings) and on who the other selected characters are. But this only sheds some light on each character’s personality. There is a small storyline pay-off at the end, which does make completing a playthrough worthwhile.

Visually and musically, Nine Parchments is a treat. This is one of the reasons why my wife liked this game a lot. Going through each stage feels like you’re exploring a painting of different environments. The characters, the monsters, and the many different spells are well-animated and all look good. And the soundtracks are quite grand and really set a good tone for an epic adventure.

Two Player Co-Op is Where the Game Shines

From our point of view, Nine Parchments is best played with two players. Played solo, the game can be brutally hard since you only have one spellbook to deal with many different element immunities. You won’t have allies who can help resurrect you. With three or four players, it becomes hard to keep out of each other’s line of fire. Everyone is also competing with the in-game camera as there is no split screen option.

In our opinion, the game’s sweet spot is with two players. There is enough space to allow both players the freedom to use whatever spell they need while keeping friendly fire minimal. The revive mechanic provides extra tension – for as long as one of you is left standing, the game isn’t over and you won’t need to use your Last Chance. Both players can plan out their spellbooks with the other’s in mind, making sure that you have all the spells that you need to deal with.

My wife and I employed a lot of different two-man strategies in our Nine Parchments playthroughs. A favorite of ours was for one to act as a decoy, with the other shooting fireballs and lightning bolts behind our enemies’ backs. Another involves one of us shooting an ice beam to freeze monsters, with the other ready to strike with his/her staff to “shatter” (physical attacks deal more damage against frozen status) the frozen enemy. Here’s another video of one of our many co-op games:

The Astral Arena and Other Stuff

As an additional treat, a few months after we had gotten our copy of Nine Parchments, Frozenbyte released a free update that included the Astral Arena Mode. In this mode, players complete shorter battle rounds in the fastest time possible. Fastest times are uploaded to online leaderboards. We haven’t played Arena in quite a while, but I’m glad to say that our fastest times are still within the top 100. 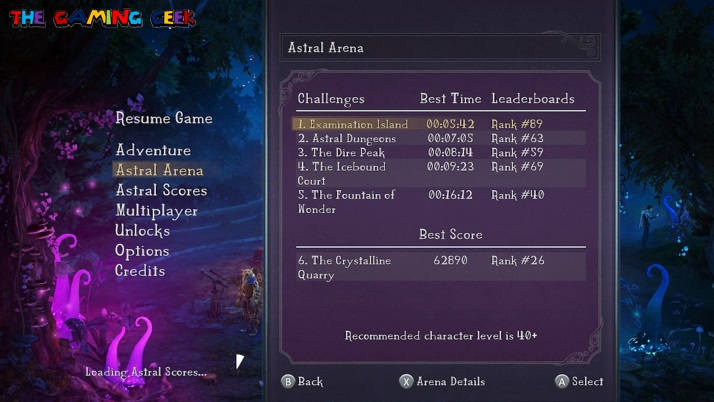 It was nice surprise to see our rankings held up after all these months of not playing the game.

One last thing – if you are a completionist, then you are in for a treat. Nine Parchments offers a lot of things to unlock. Aside from the locked seven characters, each of the nine students have three versions that you can unlock via quests or achievements. Unlocking the different variations unlocks different skill trees for each character, allowing for customization. There are different hats (cosmetics only) and staves (with different in-game buffs and abilities) that can also be unlocked. So there will be enough to do in Nine Parchments that will give you hours of play (we’re currently at 130 hours and counting).

I bought Nine Parchments for $19.99 at the Nintendo US eShop. Even at full price, I can say that I got my money’s worth. Since 2019, Frozenbyte has regularly offered Nine Parchments on sale for $5.99 and this year, they’ve lowered that down to $4.99. For that amount, this game is such a steal! You can monitor the game here at Deku Deals so you can catch it on sale.

I highly recommend Nine Parchments for couples who want to play a co-op adventure but want something simpler compared to other popular video games. It was a great option for me (an experienced gamer) and my wife (not a gamer). We’ve had a lot of fun with it, and I’m sure you will too! Let me end this post with a funny Astral Arena moment wherein we tried to beat monsters to death with our staves.