I’m glad that I decided to take a look at Ghostbusters games because if I hadn’t, I wouldn’t have learned about New Ghostbusters II. This is another game that’s based on the movie Ghostbusters II and I was surprised to learn that this was only released in Japan and PAL regions. 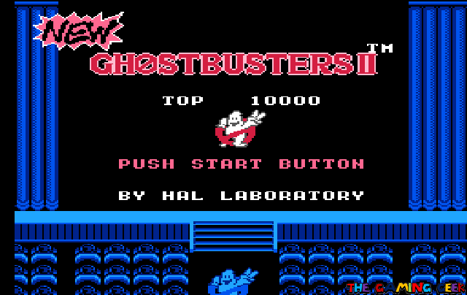 Title screen for New Ghostbusters II for the NES.

Let’s take a look at what the rest of the world missed out on.

At first, I thought that this version would be similar with the Game Boy title because it shares several characteristics. This game also uses a top-down perspective and features a pair of two Ghostbusters during gameplay. You control one of them, with the other one trailing you. All four Ghostbusters are available, with Louis as a fifth option. I couldn’t tell if the characters played differently from one another, so I’m assuming that this is purely aesthetic. 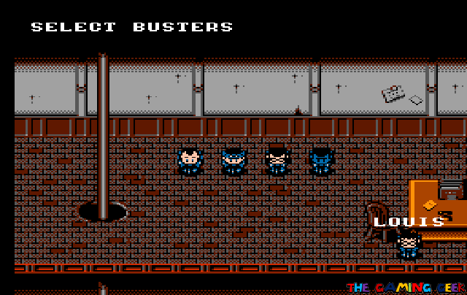 You can choose any of the four Ghostbusters, including Louis Tully.

You’ll need to catch all ghosts in an area before you can move to another. And the similarities stop there. In this game, there are far fewer ghosts and you don’t have a counter that will tell you how many ghosts are remaining. You’ll just have to keep going until an arrow appears that will show you where to go next. Also, there are no time limits in this game. 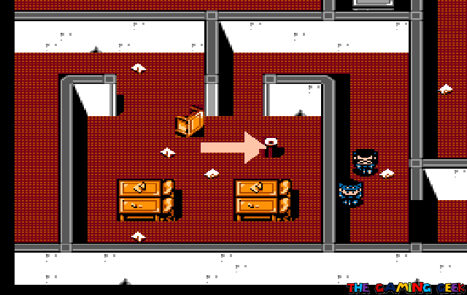 This arrow only appears once you’ve caught all the ghosts in the area.

One hit from any ghost will KO your chosen Ghostbuster. However, your partner is completely invincible to everything. You start the game with three lives and three continues. You can get more lives through power-ups that occasionally appear and by reaching specific score thresholds. There is a secret options menu where you can change this game’s difficulty and controls, but you’ll need to know the button combination to get there.

New Ghostbusters II is a pretty simple game. The D-Pad moves your character in any of the four directions that you choose. You can’t walk diagonally though. To catch a ghost, you need to hit it with a Proton Stream first. Pressing A shoots a Proton Stream. You can (and should) keep it held down to sustain the stream, but it shuts off after a few moments. The Proton Stream fires straight forward and has a limited range, so you’ll need to get close and be aligned to your target. 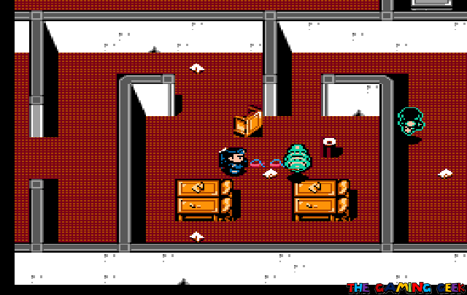 I’m glad to see the Proton Stream as your main method of catching ghosts in this game.

Once you’ve caught a ghost, the Proton Stream attaches itself to it. You can keep the A button held down and move around. Normally, you won’t need to worry about positioning as your partner is going to move automatically into position. He’ll also pass through your character, so there’s no need to worry about blocking his path. You’ll need to press the B button to make your partner toss out a ghost trap. 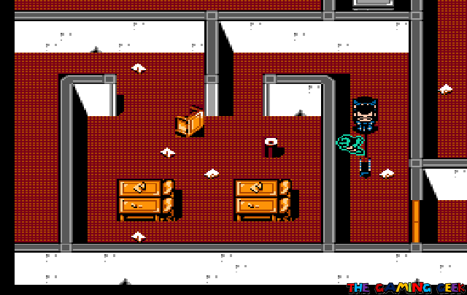 Your partner is in charge of trapping ghosts.

However, there are situations when your partner just trails you. Most of the boss fights are like this. During these situations, you’ll have to move your character to get your partner to follow and move into the right position.

I found the graphics of New Ghostbusters II to be adequate, but lackluster. The Ghostbusters are recognizable and it’s easy to tell them apart. Slimer is in the game, and it’s easy to identify some of the ghosts here as well. My issues with this game’s graphics involve the use of color. I don’t know why Winston’s skin is blue. It’s hard to get immersed in the game whenever I see him, so I avoided choosing him. 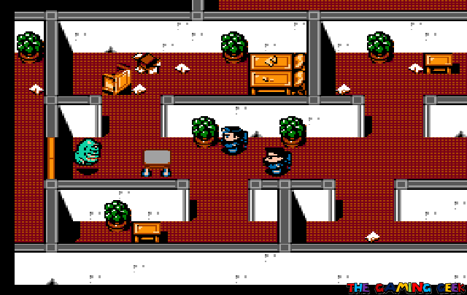 Stages are detailed enough, but some areas are repeated a little too often. Whenever this happens, it doesn’t feel like I’m actually moving from one location to another. But I also have issues with how color is used in this game’s stages. Most of the game takes place in an area that’s colored with a shade of brown, maroon, or red. Visually, this makes the game a little boring. 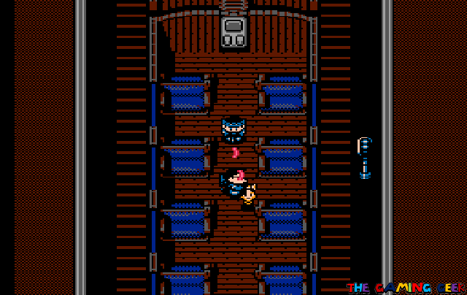 As for music and sound effects, this game is also okay. There are some good tunes, and there’s nothing really wrong when it comes to this game’s audio. This is just my personal bias though – whenever a developer uses a license that has good music, they should utilize it. I just think that this game could have used the famous Ghostbusters theme a lot more than it did. 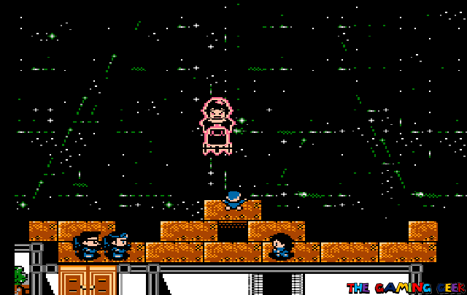 The game’s only cutscene.

I also found this game’s presentation to be lacking. There are a few neat touches here and there, like how the Ghostbuster selection is at their headquarters and how your chosen characters slide down their fire pole. This game has ONE cutscene. There’s no HUD. This doesn’t break the game, but it helps drive the feeling that this game could have used a little more content.

All in all, I thought New Ghostbusters II was okay. It was short and quite simple, and a little repetitive at times. I hate to compare it with the Game Boy version, but that one had a few more mechanics that fleshed it out, like power ups that changed the gameplay somewhat.

This is definitely better than the other Ghostbusters games on the NES. And because you’re using the Proton Stream and actually catching ghosts throughout the game, I actually like this more than the Sega Genesis version. If you want to play a classic Ghostbusters game though, I suggest that you try the Game Boy version first. And if you’re still hungry for more ghostbusting, this game will give you more.