I never imagined that I’d play the first Castlevania on the NES for this blog. I was never a big fan of the 8-bit trilogy. But I’ve always thought about playing Symphony of the Night – a game that I’ve never played despite it’s popularity. After spending quite a bit of time with superhero games, I thought that it’s now time to play some of the games that I’ve been thinking of playing. But to do this properly, I’m going to have to start with the earlier Castlevania games, because I’m not sure that I’ll be able to appreciate them after I’ve had a taste of the sequels. 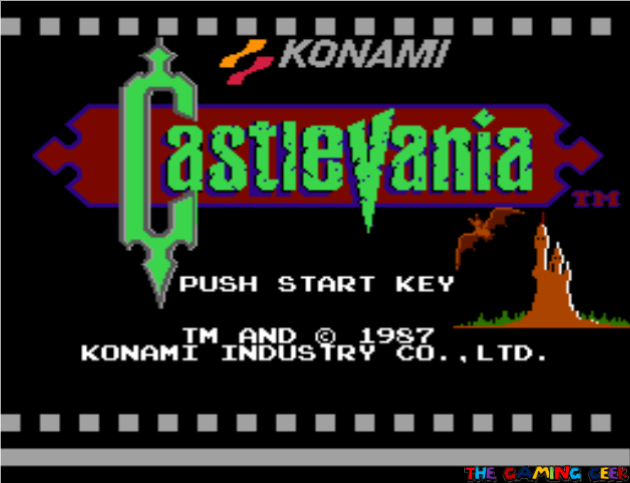 Title screen for Castlevania on the Nintendo Entertainment System.

Let’s talk about the very first game in one of Konami’s most popular franchises.

Castlevania, known as Akumajo Dracula in Japan, was developed by Konami originally for the Famicom Disk System and ported later on to the NES and the Famicom. It is a single player action platformer where you take on the role of Simon Belmont, who comes from a long line of legendary vampire hunters. The game features mechanics that are distinct to the franchise, such as having a fixed jump arc and jumping backwards whenever you get hit by an enemy. 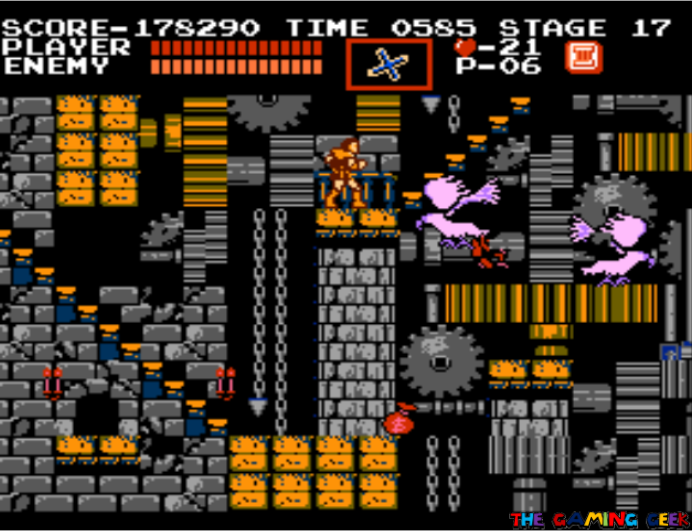 In the game you have a health meter, as well as a number of lives. When you run out of health, fall into a pit, or get caught in an instant death trap, you lose a life. Occasionally, you’ll find hidden meat inside breakable walls that will replenish part of your health meter. These are quite rare though. You start each game with four lives. If you lose them all, it’s game over. The game has unlimited continues, but it doesn’t have any password or save system, so you’ll need to beat it in one go.

In Castlevania, you have a number of moves at your disposal. You can walk left/right using the D-Pad. To crouch, press down. You can also walk up and down stairs by pressing Up or Down at the end of the stairs. If you try to jump onto the stairs, you’ll just pass through. While on the stairs, you can’t jump off of them either. 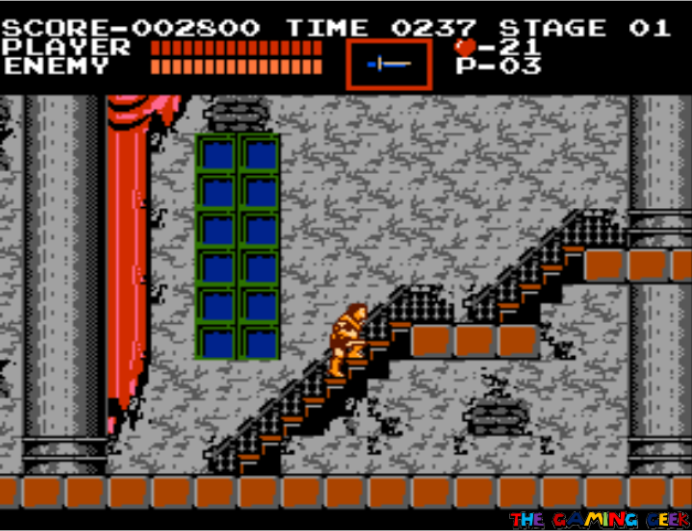 You’re a sitting duck any time you are walking across a flight of stairs.

To jump, you need to press the A button. And like I said earlier, Simon’s jump arc is fixed. You can’t change direction in mid-air or slow yourself down. Whether you hold the A button longer or just tap it, your jump height and distance will be the same. Precision is important in mastering this game.

One of the most famous aspects of Castlevania is Simon Belmont’s primary weapon, which is a whip. To attack with your whip, you need to press the B button. 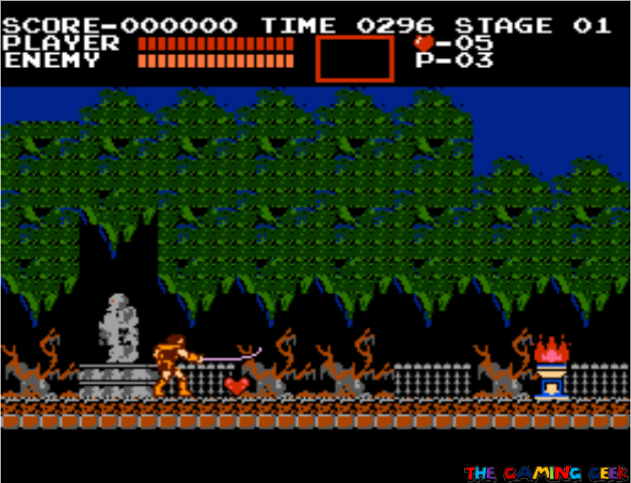 You start off with a regular whip.

You’ll start the game with a really weak-looking whip. There is a power up that will upgrade this, and there are two level upgrades. The first one changes your whip into a chain and adds a ball at the end. I think this increases your whip’s damage. 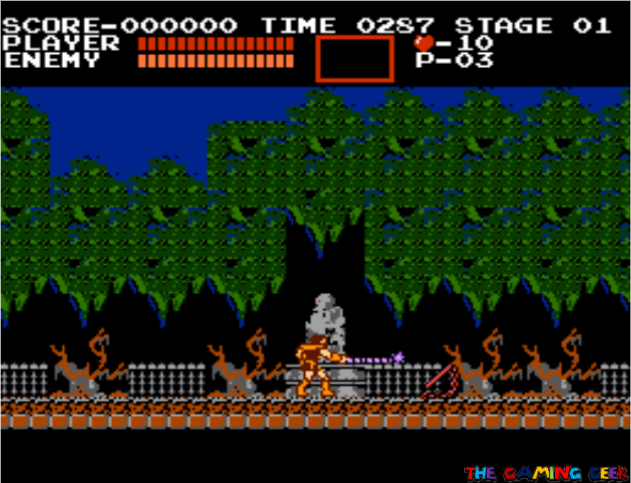 Upgrading it a second time will change your whip into the famed Vampire Killer. This whip is twice as long and appears to deal a lot more damage too. Regardless of your whip level, they all behave the same way: there is a lag between when you press the B button and when it’s hitbox comes out. Like I said about jumping – this game is all about precision. In this case, it’s getting a good feel of the timing of the whip and attacking at the precise moment. 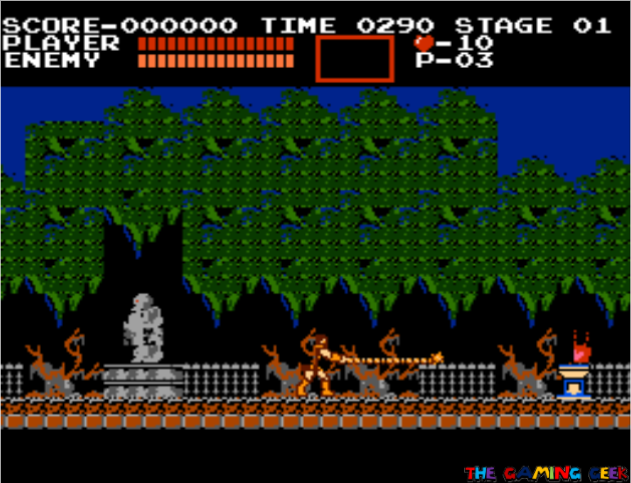 What I find weird about this upgrade mechanic is you only lose it when you get killed and start over. And in my experience, there are two upgrade power ups immediately after your respawn point. So I had the Vampire Killer for most of my playthrough, even if I lost a few lives on my way to the end. If they were going to design the game like this, why not just start every game with the Vampire Killer by default?

Castlevania is also known for it’s sub-weapons. Here, you can choose between five different sub-weapons. To use a sub-weapon, you need to press Up and the B button. Using sub-weapons will cost Hearts. The weakest is the Knife. Simon throws this forward in a straight path all the way to the end of the screen. The Axe is thrown upwards and flies at an arc. It is effective against flying enemies. Since it goes upward first, it is not effective against enemies that are right in front of you. 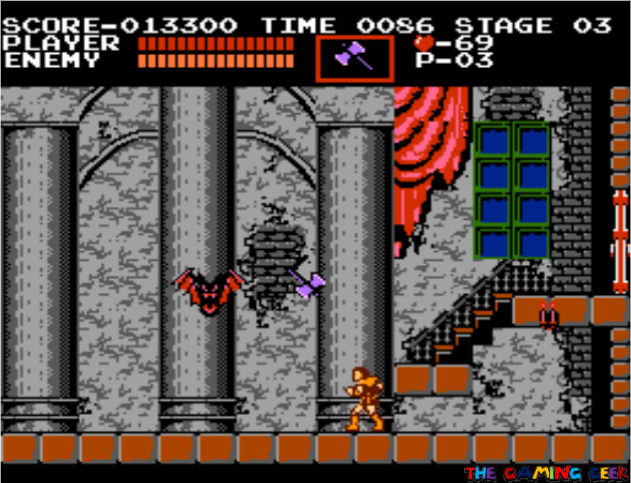 The Axe is effective against flying enemies.

The Holy Water is thrown directly forward and almost immediately falls downward, so it doesn’t go very far. When it hits anything, it explodes into a small fire that stays a few moments. The best use of this is against enemies that are moving really low across floors. You can also jump and throw this at the peak of your jump for maximum range. 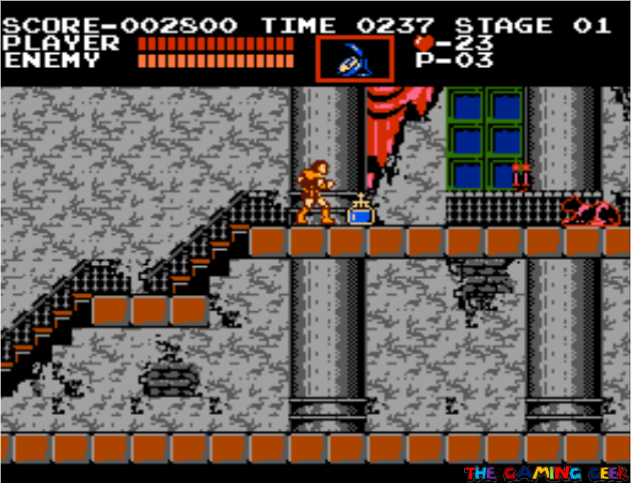 The Holy Water is thrown downwards.

The Cross is my favorite. Like the Knife, it is thrown straight forward. At a certain point, it will return to Simon’s hands – hence people calling this the Cross Boomerang. It deals the most damage, passes through enemies, and also hits them on the way back. 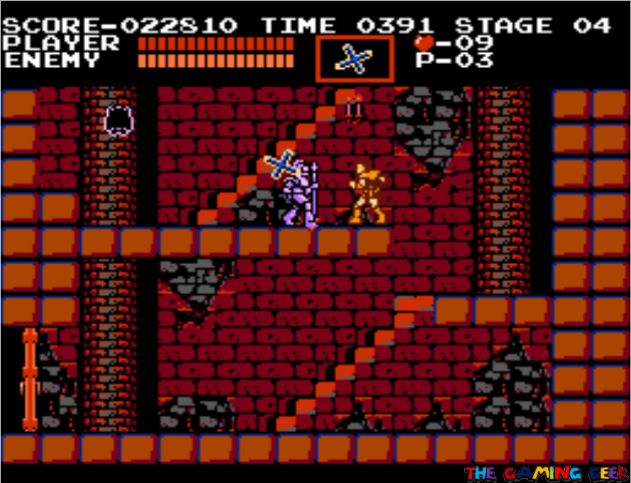 The Cross is my favorite secondary weapon in the franchise.

The final sub-weapon is the Stopwatch. When you use it, it freezes onscreen enemies for several seconds. I never really used this, so I’m not sure if it works on bosses. And one final note on sub-weapons: you can only use one at a time. There are upgrades that will allow you to use two or three at a time. But you lose those upgrades when you pick up a different sub-weapon.

What stood out to me in my playthrough of Castlevania are the game’s monsters. For an early NES game, this had really good variety of enemies to fight. And they all made sense too. You won’t be fighting bubbles or earthworms in this game. They’re all worthy of serving Dracula. 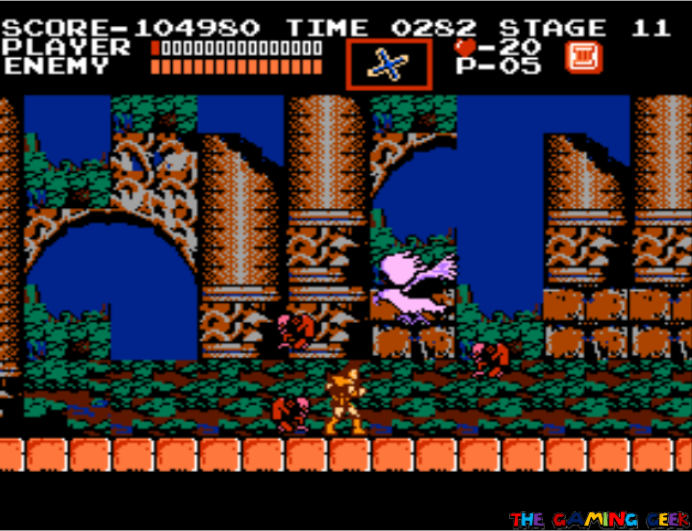 You’ll fight skeletons, zombies, evil bats, possessed suits of armor, imps, and even Mermen. And that’s just the regular enemies. The bosses are also quite interesting. You’ll need to defeat mummies, a large Gorgon head, and even Death, before you can fight the Lord of Darkness. 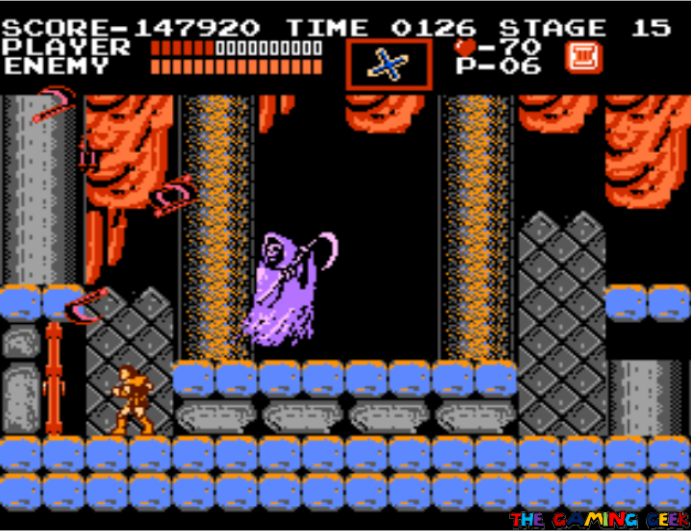 Death stands between you and Dracula.

And the final battle itself was really impressive for a game made in the late 1980s. Dracula is a two-stage boss. You’ll have to fight his humanoid form and a more demonic version later on.

I was really impressed with Castlevania’s graphics. This is an early 8-bit game, but Konami already knew how to maximize the 8-bit format. Sprites are quite detailed, and the colors chosen for each were quite apt based on the stages that they appear in. I’m amazed that enemies rarely blended into the stage backgrounds. The stages themselves also look great. They’re colorful, but they have a different feel compared to Super Mario Bros. stages, for example. I also appreciate that they were able to differentiate areas of the castle through the color choices, so it felt like I was exploring a large castle. 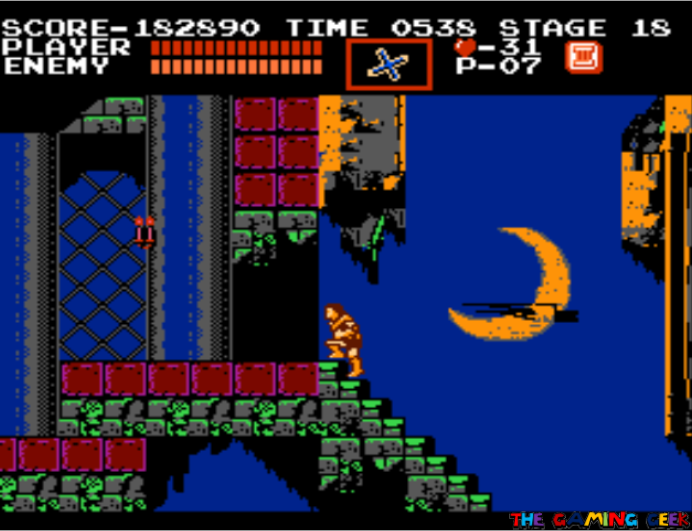 I finally experienced the original lead up to Dracula’s chambers.

Do I even need to talk about this game’s soundtrack? This game has music so iconic, they’ve been reused and remade countless times. It was nice to finally hear Castlevania’s famous tracks in their original form. There is no question, the music is the high point of this game. 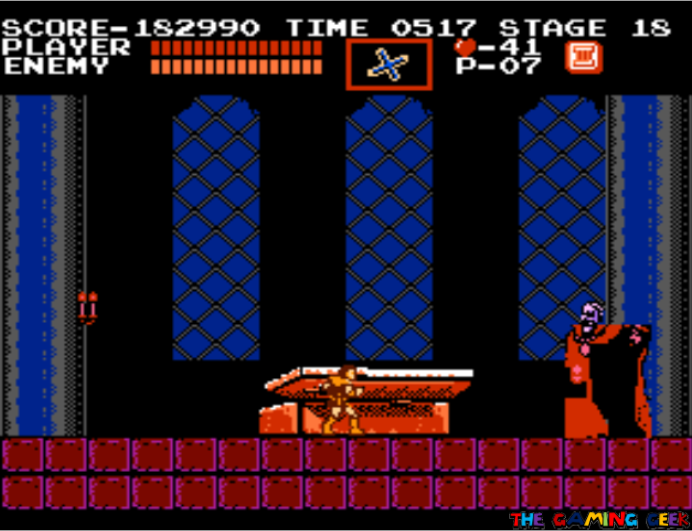 Can Simon defeat Dracula? Depends on how good you are.

As for presentation, this game does the bare minimum. The HUD is clear and easy to understand. There’s a cutscene showing where Simon is at the start of every level group via a map-style screen. You get a scene of Simon entering the castle grounds, and a final scene that I won’t spoil. And that’s it. I could’ve used at least an explanation of the game’s plot in the attract mode.  Because this is an early NES release, it’s easy to forgive.

The only bad thing I can say about Castlevania is that in the later stages, there are sections that are bordering on being unfairly difficult. But because this game gives you unlimited continues, you’ll be able to beat it with persistence, time, and a bit of luck. Aside from this, I enjoyed my playthrough of this game.

And it’s quite easy to see how this game launched an entire franchise. I’m glad that I decided to play this game, and I can’t wait to try this game’s sequels. Except for Simon’s Quest, that one I’m skipping. Anyone who enjoys 8-bit platformers has probably played this game already. If you like 8-bit games and you haven’t played this, what are you waiting for?