Prior to revisiting this game recently, I actually purchased Castlevania III: Dracula’s Curse on the 3DS Virtual Console and beat it there. So it hasn’t been a long time since I last played this game. Yet, I was quite excited at the thought of playing this game again. 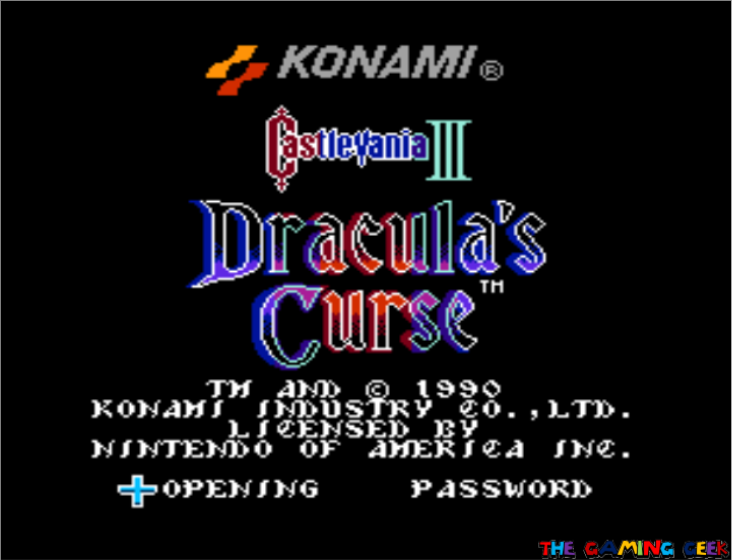 Castlevania III: Dracula’s Curse is an action platformer that was developed and published by Konami for the Nintendo Entertainment System. This time around, the quest of killing Dracula falls on Trevor Belmont’s shoulders. What makes the third game unique is the introduction of additional playable characters and branching paths. This game has a high replay value, as each character has a different style of play, different endings, and even different stages. 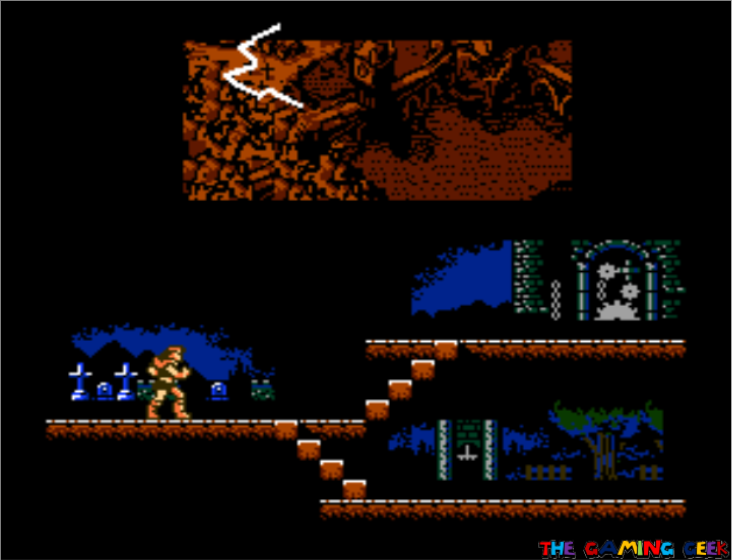 The game will occasionally ask you to choose between two different paths to take.

Similar to other action platformer games, you’ve got a health meter in this game as well as a number of lives. You lose a life when your health is completely depleted or if you fall into a pit or become victim to instant death traps like spikes. Meat power ups can replenish your health, but these are rare and only found hidden in destructible wall sections. 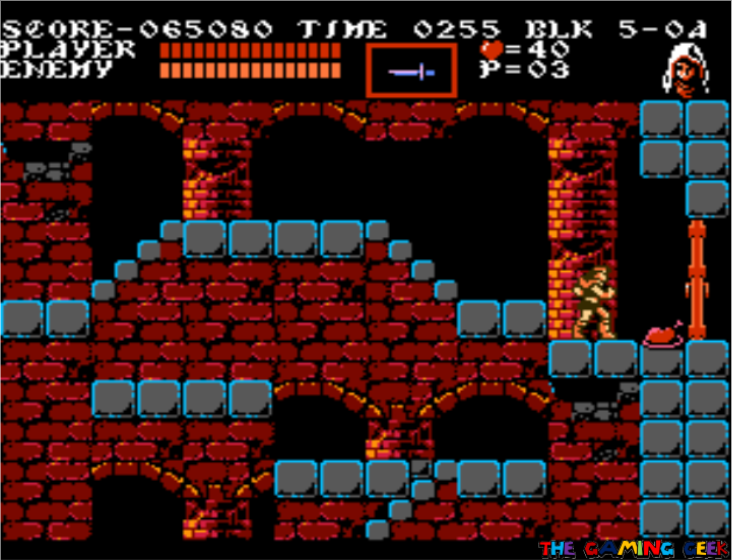 Meat will fill up your health, but they are quite rare.

You start the game with three lives. You can earn more whenever you hit specific score thresholds or through extra life power ups which are also very rare. Thankfully, the game offers unlimited continues and even has a Password system that will let you “save” your progress. Continuing from a password will also start you off with three lives.

On the surface, Castlevania III: Dracula’s Curse plays so much like the first, I was tempted to just grab what I wrote for that game. Left and right on the D-Pad moves Trevor, and down makes him crouch. Up and down moves him on stairs. The A button is for jumping, and the B button will make him swing his whip. 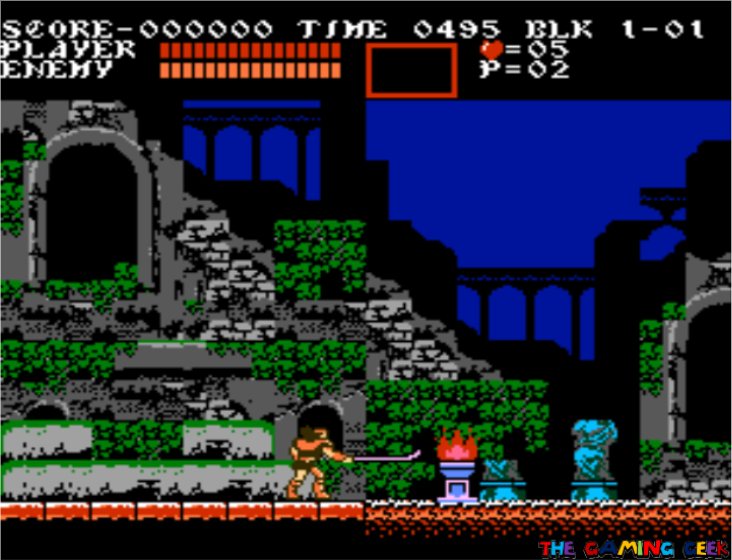 The Vampire Killer whip can be upgraded twice.

The Belmont sub-weapons also make their return here, and they’re pretty much the same. Pressing Up and B will use your equipped sub-weapon. The Stopwatch freezes time for a few moments. The Knife is thrown straight forward. The Holy Water is thrown a short distance and creates a small explosion where it lands. 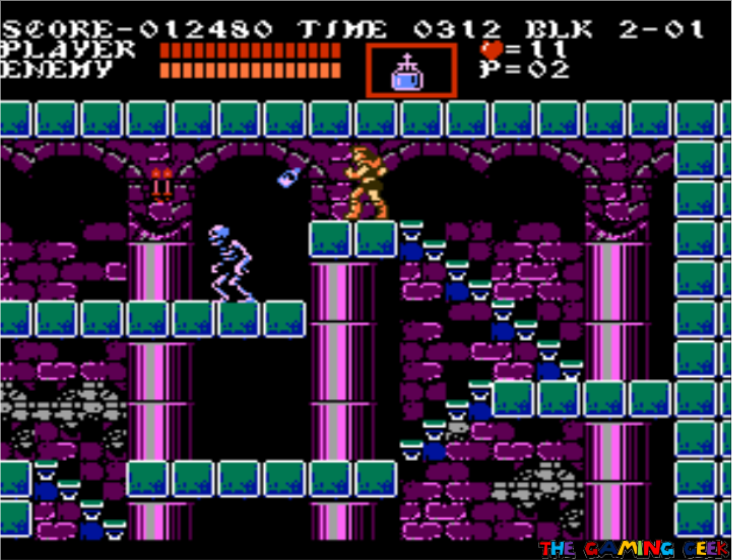 My favorite sub-weapon is the Cross, which functions like a boomerang. But after playing these games again, I can’t deny that the Axe is the best weapon simply because of how useful it is. You throw this upward in an arc, and it will eventually fall down. With proper spacing and timing, you can hit enemies above you or below you with the Axe. 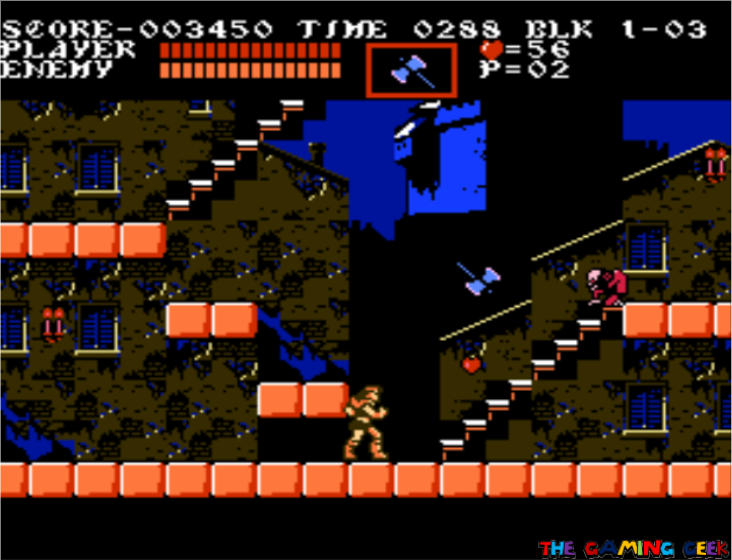 Finally, aside from the Meat and extra life power ups, there are a few more that you can get in this game. Hearts fuel your sub-weapons. The Rosary kills all onscreen enemies. A pair of power ups that I can only describe as “II” and “III” will allow you to throw more than one of your current sub-weapons at a time.

Despite Trevor playing the exact same way as his son Simon, Castlevania III manages to change the game up by introducing additional playable characters. As you progress in the game, you’ll first meet Grant Danasty (Danusty in the end credits). He uses a knife to attack. While it’s range is short and it is weaker than an upgraded whip, I find it easier to time my attacks with this. Grant also has the ability to cling to walls and ceilings, making him a good alternative to Trevor. 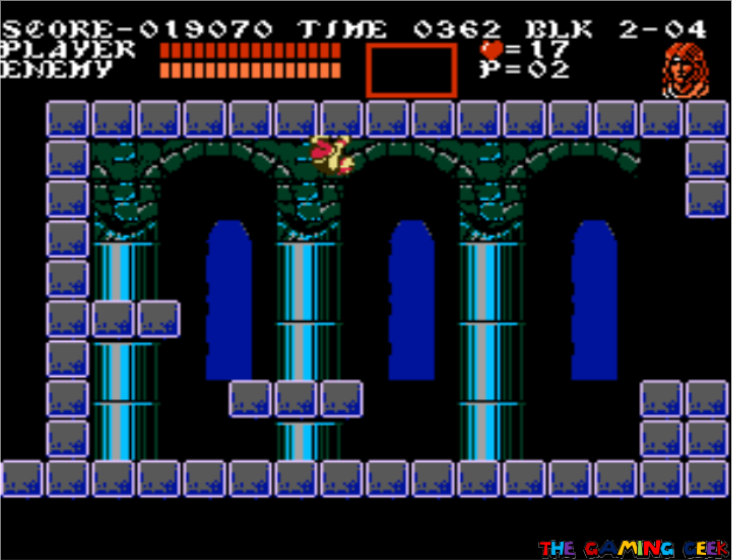 Depending on your chosen path, you might end up meeting Sypha Belnades (spelled Syfa in the game). She’ll call herself a vampire hunter, but she plays like a mage. She uses a staff for attacking which also has a short range but is easier to hit with. Instead of sub-weapons, she uses spell books. Her spells are really powerful, especially her ice spell and lightning spell. If you allow her to join you, she’ll replace Grant as your partner. 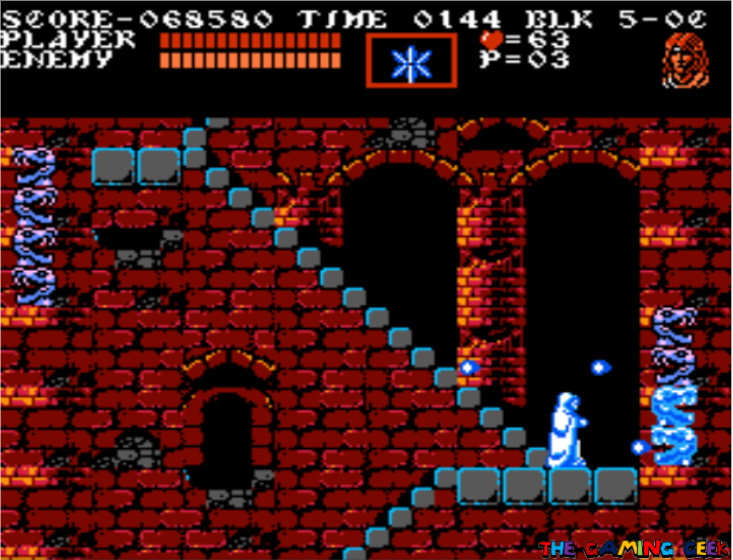 Sypha Belnades and her ice spell.

Or you could end up meeting Alucard instead. In this game, he attacks by shooting balls of energy straight forward. Like the whip, this attack can be upgraded twice. The first upgrade adds a second energy ball that shoots diagonally upward. The second upgrade adds a third that shoots diagonally downward. When fully upgraded, his attack functions like a spread shot. He can only use the Stopwatch sub-weapon, but he’s got the handy ability to turn into a bat by pressing Down and A. 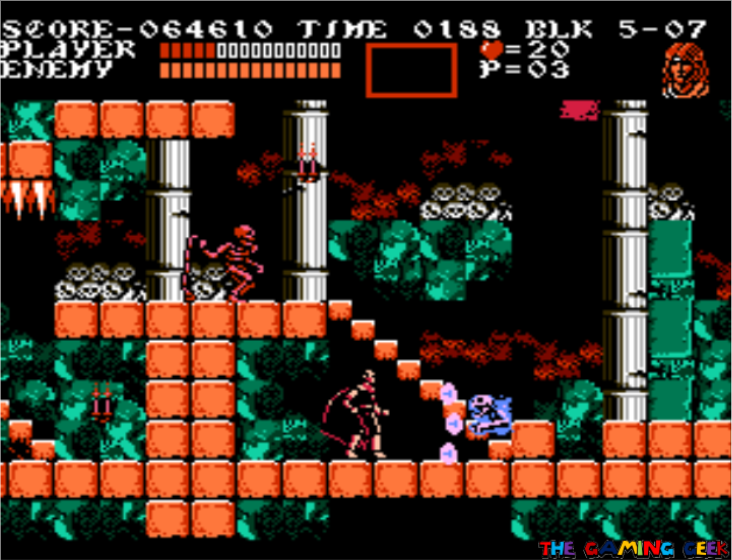 You can quickly switch characters by pressing the Select button. Adding these characters pushed this game to the next level. I ended up doing two full playthroughs of this game, beating it with Sypha and then Alucard.

I was pleased to see that the developers didn’t waste the concept of branching paths in Castlevania III. Instead of just being able to switch between partner characters, you’ll actually go through stages that are really different from each other. And not just in looks or in the layout of the platforms, but also in how a few of them work. I remember going through an area with falling blocks in my second playthrough, that I didn’t encounter in my first. 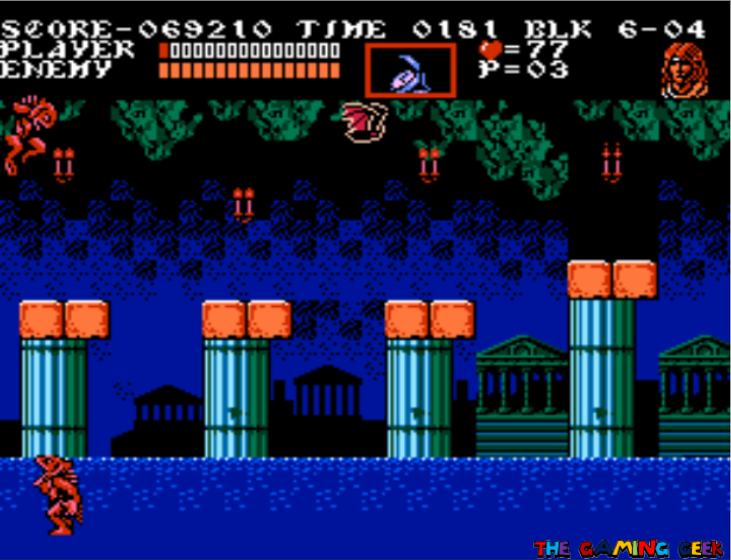 Turning into a bat can help you overcome challenging sections.

In terms of immersion, I liked that this game actually takes place in areas outside of Dracula’s castle. It makes Trevor’s journey a lot more believable. You go through catacombs, abandoned villages, and even a ghost ship! 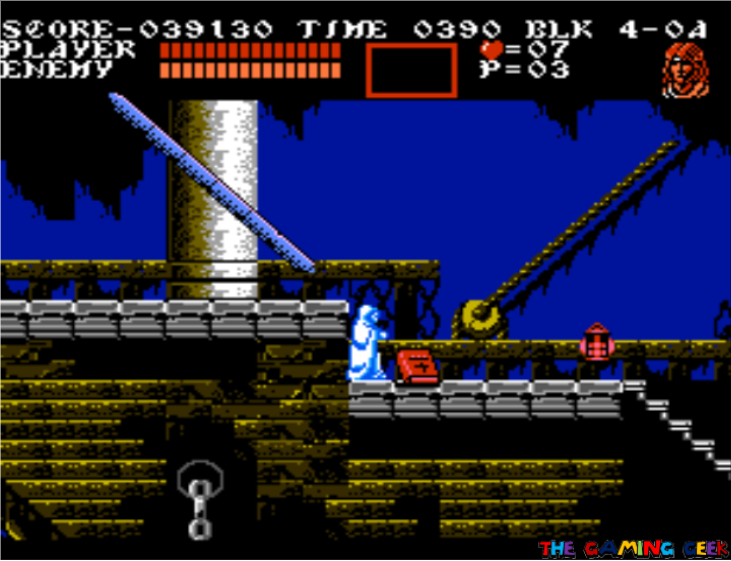 Finding the fire spell book on the ghost ship.

Of course, these varying paths are accompanied by different game endings. And for NES standards, the endings actually offer good narrative closure for the characters.

Another aspect of Castlevania III that I liked a lot are the boss fights. Because of the game’s horror theme, most of the bosses are recognizable even if I’m not a hardcore Castlevania fan. And aside from looking good visually, they’re also adequately designed within the restrictions of an 8-bit game. 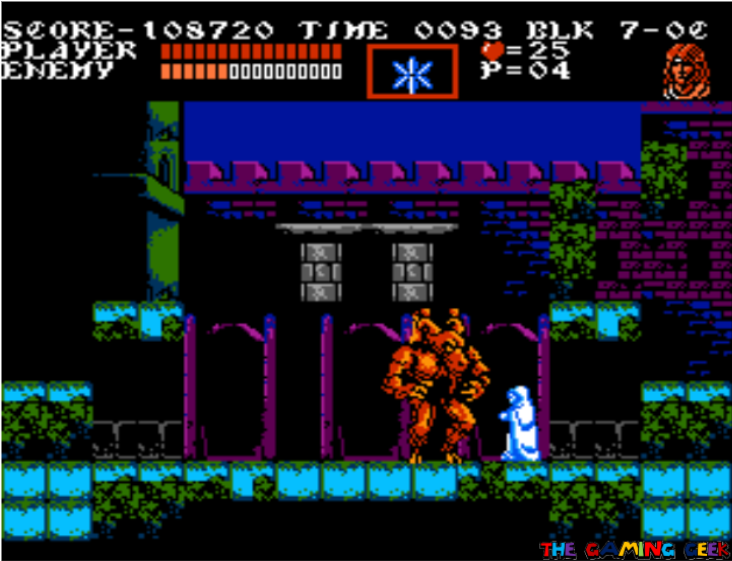 Having additional playable characters made me enjoy these battles even more. Being able to fight these bosses using characters with different combat styles was refreshing. And I like how you can choose how to experience these battles. If you want a traditional Castlevania experience, fight as Trevor. 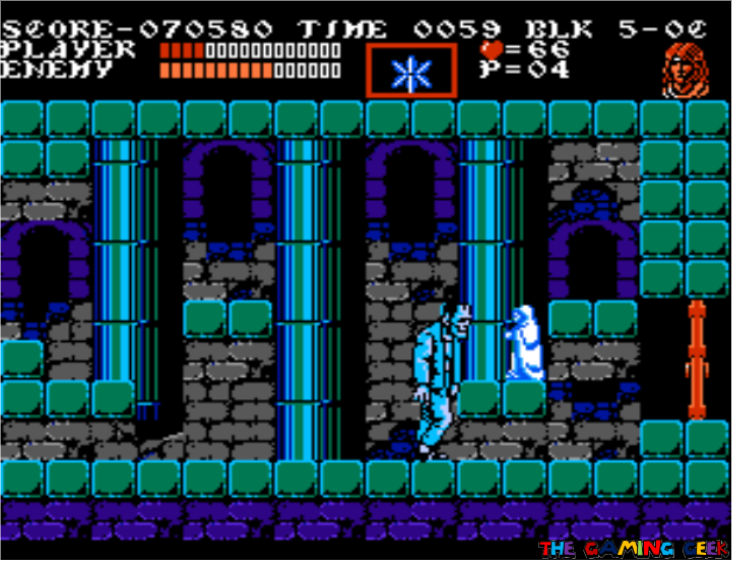 Sypha and Alucard have abilities that completely change how you need to fight these monsters. It’s fun to try each character out against all the bosses. I had the chance to fight Death using Sypha, Trevor, and even Alucard. This is another aspect of the game that makes replaying it a lot of fun.

When I got Castlevania III: Dracula’s Curse on the 3DS Virtual Console, I was impressed at how good this game looked. And I still feel the same way. Konami did a great job at designing this game’s sprites. Each one is quite detailed, very recognizable, and are animated well for an 8-bit game. But they did an especially excellent job at making sure that each stage would be unique and different enough from each other through their color choices and tile usage. Just skim through this article real quick and take a look at how many different colors there are in the screenshots that I took. 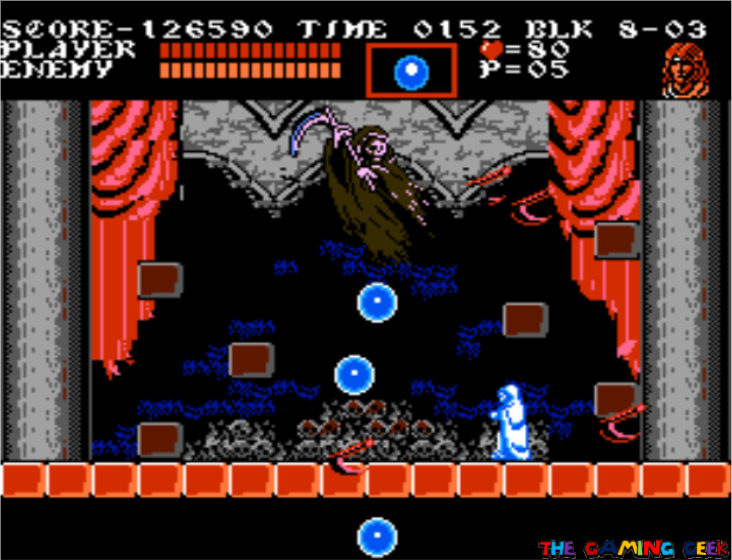 Sypha and her lightning spell against Death.

But what really stands out about this game is it’s soundtrack. Some video games have music that is nice to listen to while playing. This game has music that you’ll want to listen to even when you’re not playing. From the melodies to the simulated instrumentation, this game’s excellent music is truly remarkable. Now that I think about it, the music also makes replays quite fun.

As for presentation, this game did more than what most 8-bit games do. It’s got narrative that sets the game’s plot in the attract mode scenes. You get some dialogue explaining each character’s part in the story. And the endings are actual endings that give the story closure. I also like that there is a headshot in the HUD of the inactive character. Again, the content here is more than what you can get from other 8-bit games.

I just love what they did with Castlevania III: Dracula’s Curse. Adding new characters that acted differently changed up the formula, while making Trevor exactly the same as Simon meant that this game could still offer the traditional Castlevania experience. My only complaint is that this game is still unbelievably hard in the later stages, but unlimited continues and a password system mitigates that.

With the additional polish in the form of text narratives, the excellent graphics, awesome music, and branching paths for replay value makes it easy for me to conclude that this is the definitive 8-bit Castlevania experience. This game definitely holds up to today’s standards and is worth revisiting every now and then. Any gamer should have a copy of this in their collection in some form.