I was thinking of saving Batman: The Video Game for the NES for later, since I just wrote about the Game Boy version several weeks ago. But there are so many Batman games (including three on the NES), so I figured I might as well tick one off the long list before I moved to a different console. 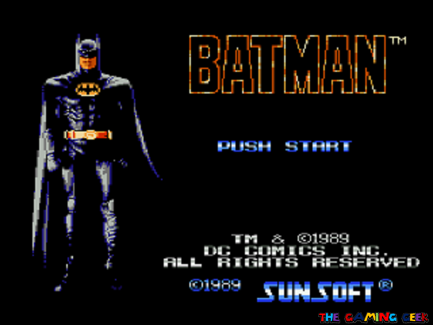 Batman: The Video Game for the NES is an action platformer where you take control of Batman. This is inspired by the events of the first Batman movie so you can expect to face off against Joker in this game. Batman can attack enemies via punching or by throwing Batarangs, by shooting missiles or a spread shot from a device worn on his wrist. He can attack while standing, crouching, and in the air. He can jump and if Batman touches a vertical surface, he can do what’s called a wall-jump. In tight spaces, you can do consecutive wall-jumps and make your way up the levels.

Instead of simply going forward, the stages in Batman: The Video Game expand in different directions.

Now that I’m writing about it, it seems like Batman doesn’t do a lot. But in practice, this is more than enough to make you feel like you’re Batman, especially the version being depicted in the game. The only other ability that I would’ve wanted to see would be the ability to launch a grappling hook, but this isn’t needed based on how the game was designed.

Your goal on every level is to explore the stages until you get to the exit. The levels of Batman: The Video Game are vast for a NES game. If these levels weren’t linear, I would almost consider Batman: The Video Game as a Metroidvania game. Along the way, you’ll face a good variety of enemies and even level bosses aside from the Joker.

The graphics of Batman: The Video Game are amazing for a NES game. Even if Batman consists of nothing but shades of blue, his sprite is quite detailed. This actually helps Batman stand out against the backgrounds and stage elements. Enemy sprites are also very detailed. It’s easy to see what you’re fighting, even if these are all just generic enemies. The Joker looks especially good, and I like how Sunsoft including Joker’s long-barreled revolver in the game. 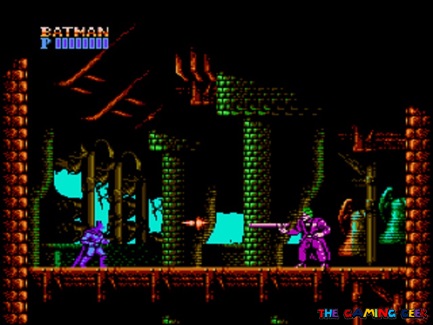 Joker’s gun took down the Batwing in the film.

The stages are also quite beautiful. Just by looking at the floors, walls, and backgrounds, you can tell what location is being represented. I do have a complaint though. These stages might look amazing, but they don’t necessarily follow the events of the film. It’s not a gamebreaker, but when I play these tie-ins, it helps me “relive” the stories being told by the source material. I understand that the developers have to take some liberties, so consider this a minor nitpick.

I don’t think Batman explored a cave system in the movie.

Adding to the presentation value are short cutscenes in between stages that look really good. But these could have been better if the scenes were able to relate the events of the movie. In the film, Batman has a confrontation with crime boss Jack Napier, which leads to an accident that turns the latter into the Joker. This wasn’t clearly depicted in the game, which is a missed opportunity.

The game’s music and sounds are excellent. I don’t know why this game isn’t as talked about as other NES classics like Castlevania and Mega Man titles when it comes to BGM, but I think the music of Batman: The Video Game is at par.

My biggest issue with Batman: The Video Game is its difficulty. I saw this game among a list of NES games considered to be really difficult. And the list is absolutely correct when they included this game. In the game’s defense, its game mechanics are excellent. The controls are very responsive, and Batman can do what is required by the game’s design.

The game is difficult because it is designed to push the player’s skill to the highest level. Especially in the later stages, you will need to perform pixel-perfect maneuvers to make it to the end. You will really need to figure out the movement patterns of the bosses to defeat them. 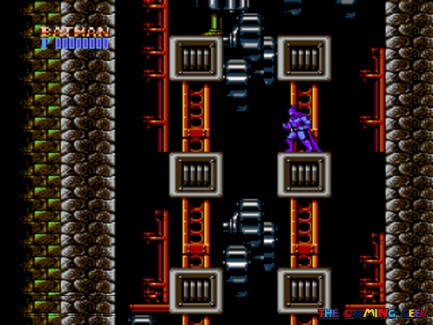 It is very, very difficult to pass this area unscathed.

The challenge isn’t unfair though. All enemies drop power ups when defeated, and they respawn when offscreen so you will have opportunities to recharge your health or replenish your ammo. The game also has unlimited continues and except for the final stage, the game won’t send you to the beginning if you die. But the game doesn’t have a save or password system so you’ll need to beat this in one sitting. And the last stage will put you through an almost impossible gauntlet of challenges, including two boss fights back to back.

There are some minor tweaks that could make this game more accessible, such as giving Batman a little more health. The health power up only recharges one bar of health; doubling that could reduce the time and effort you need to recharge. Boss damage could be a little lower. Adding difficulty settings so that players can play in easier modes would also help.

If describing the game and sharing screenshots isn’t enough, you might want to consider checking out a quick preview of the game on my channel! Here’s the first section of Batman: The Video Game:

Batman: The Video Game is a really good game. It has excellent visuals and sounds, solid game mechanics and crisp controls. If you ignore the fact that it’s supposed to be a movie tie-in, you won’t notice its differences with the source material. Playing this game really feels like taking on the role of Batman in one of his adventures.

But this game gets really hard in the later stages and that might affect your experience. To beat this game, you will really need to invest time in learning the stage layouts and enemy patterns. More importantly, you’ll need to master the timing of your wall-jumps to make it through the final stages. I would recommend this game to hardcore gamers who want to put their video gaming skills to the test because unlike other NES games infamous for their difficulty, this game isn’t unfair. If you’re looking for a classic superhero game to play, you should consider trying this game out.