Batman: Return of the Joker is Sunsoft’s follow up to Batman: The Video Game. The former is based on the 1989 Batman film by Tim Burton. I was quite interested in this game because I wanted to see how you could make a video game sequel for a movie tie-in game, if the film itself hasn’t gotten a sequel yet. So I played this game recently, and I’m here to talk about the experience. 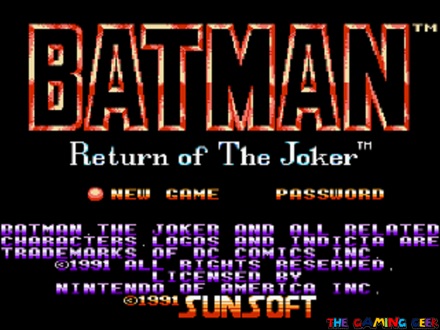 Title screen for Batman: Return of the Joker for the NES.

Batman: Return of the Joker is an action platformer developed and published by Sunsoft for both the NES and Game Boy. Despite bearing the same name, the games are quite different. Check out my experience with the Game Boy version here. The NES version is clearly being played up as a sequel to Batman: The Video Game as it uses the same exact font and style. 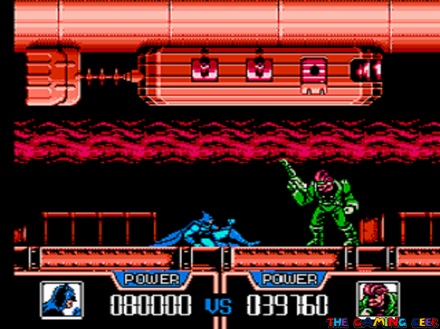 Batman gains a sliding kick in Return of the Joker.

In this game, you play as Batman as he faces against the minions of the Joker. He can walk, crouch, and jump – the usual moves in action games. Batman has a new sliding kick that moves him forward really fast. He can use this move to avoid projectiles or even damage enemies. However, this move doesn’t stop at ledges so you can accidentally slide off platforms. Batman doesn’t have some moves that I’ve come to expect, such as a wall jump or a grappling hook.

The stages in the game are divided into sub-levels. Batman also has a health bar and an energy bar. Unfortunately, there are no health power ups in this game. If your health meter runs out, you die. You have up to three lives per play, but this becomes irrelevant because the game has unlimited continues. Every time you die, you start from the beginning of the sub-level. The game also has a password system that will allow you to continue from the sub-level that you want to start from.

To attack, Batman uses a wrist-mounted blaster instead of his usual hand-to-hand attacks. By default, it shoots normal straight shots, but you can get power ups that will change your shots. One allows you to shoot two bullets at once, following a criss-crossing trajectory. There’s a homing shot, as well as a spread shot that fires at upward angles. The best shot type is a single, high damage projectile that splits into four directions. 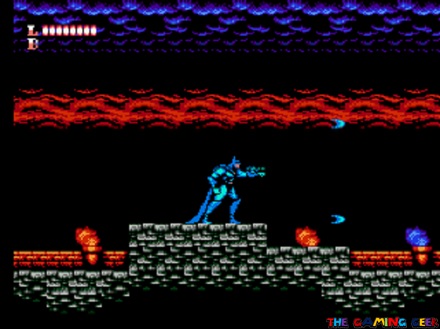 Batman shoots a wrist gun for his attacks.

Once your shot is powered up, Batman gains access to a special move. Whenever you hold the attack button down, Batman is able to charge a powerful shot. The type of special shot that you can do depends on the power up that you currently have. 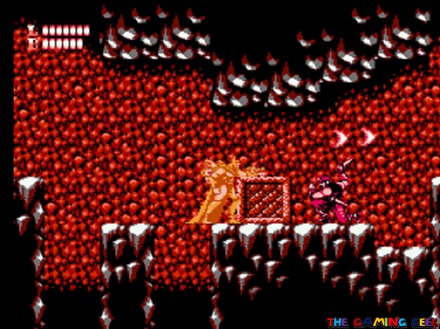 While in Golden mode, Batman is invincible and automatically fires his wrist gun at a fast rate. This only lasts a few seconds, so whenever you find yourself in this mode, you better take advantage of it. His special move in this mode also changes into a screen clear attack.

Batman: Return of the Joker has a few flying sub-levels. These are auto-scrolling levels that uses shoot ’em up mechanics. What’s weird about these sections is that, instead of being in the Batwing, Batman sports a jetpack himself. 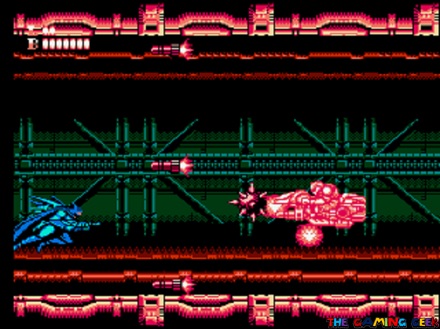 Batman can fly in Return of the Joker via a special jetpack.

In these levels, Batman’s sprite is holding a rifle-like gun. However, he still fires the same type of shots – you carry over your power up from the previous sub-level. Other than feeling out of place in terms of the character, these levels play well.

The boss fights in Batman: Return of the Joker play a bit differently from normal stages. Instead of his health bar, Batman and the enemy boss have a numerical health meter. The mechanics are still the same, only that Batman can sustain a lot more damage. But the goal is still the same – deplete the boss health meter before you lose all your health.

Some of the bosses that you’ll face early in the game.

Aside from the Joker, these bosses are new creations and not based on known DC characters. They’re fairly straightforward once you figure out their attack patterns and weaknesses. The change in the health meters do make the boss fights more memorable than fights with normal enemies.

My biggest gripe with Batman: Return of the Joker has to do with how difficult the game is. Aside from having no health power ups, the game employs unfair game design. Enemies are programmed in such a way that it’ll be hard to avoid damage unless you already know what’s coming.

In some cases, even if you already know what you’re facing, avoiding enemy attacks is simply hard to dodge. One common situation involves having an enemy right after a gap. These enemies will fire immediately after you jump across the gap and land. Even if you know that the enemy is there, you’ll need to react quickly.

This game has other design mechanics that are quite annoying, such as hidden stage hazards that you’ll only be able to react to if you know they’re there. In order to change the shot power up that you’ll get, you need to shoot them until they change. They disappear quickly so you’ll really have to tap that attack button fast, and stop when you see the power up that you like. This also means that your shots don’t pass through power ups. Power ups tend to become unintentional cover for your enemies.

For a NES game, Batman: Return of the Joker looks quite stunning. The game has large, detailed, and well animated sprites. You can even clearly see Batman’s wrist blaster. The game has excellent use of color, not just in the sprites but also in the stages and backgrounds.

Because of the detailed graphics, you can easily tell that the first stage takes place in a castle.

The excellent graphics also goes beyond the gameplay. The introduction cutscene, as well as splash screens in between stages, are all done with beautiful pixel art.

The introduction has a sequence of the Joker, the Bat-signal, and Batman himself.

As for the sound, Sunsoft has done a wonderful job in using high energy, action oriented stage music. The tracks are so good, I’m going to tell you the cheat code to access the game’s sound test. At the title screen, you have to press and hold Start + A. From here, you can listen to every track and sound effect of the game.

Every time you clear a stage, you get treated to pixel art of Batman, the Batmobile, or the Batwing.

The game has great presentation, but my other complaint about Batman: Return of the Joker involves thematic accuracy. Sure, Batman looks like Batman, and the Joker looks like the Joker. But there are certain elements that are missing from the game that me feel like this isn’t really a Batman game. With Batman fighting by shooting his wrist blaster, it feels like I’m playing a game that’s closer to Konami’s Contra or Capcom’s Mega Man. He doesn’t have his Batarangs nor his grappling hook. And he doesn’t even have punching attacks. 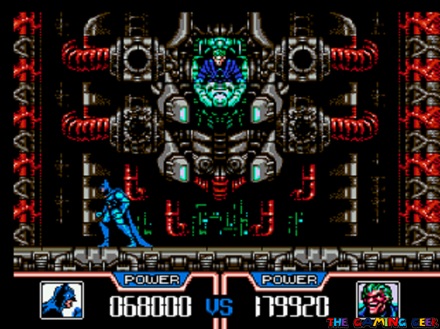 The Joker fights you in what looks like a weird mech/ship hybrid.

It’s not just the gameplay. Enemies have a technology-based style, and Batman deals mostly with criminals and henchmen. Locations aren’t based on places that you’d see in Gotham City. Even the Joker is riding something that fits more in a Contra game. I’m not opposed to him using robots, but they’re normally funhouse or carnival themed.

Batman: Return of the Joker is a game that has excellent graphics and sounds, with solid gameplay mechanics. What keeps me from recommending this game is it’s frustrating difficulty. Having unlimited continues and a password means that you will be able to beat this game, although you’ll need patience and level memorization in order to succeed.

It looks like this Batman adventure is taking place far away from Gotham City.

Another thing that holds it back is how it doesn’t feel like it’s a Batman game. When you’re basing your video game on a specific character, you need to be able to make the player feel like they’re playing as that character. The game isn’t too far off, but its far enough to affect the overall experience. If you don’t mind playing a version of Batman that uses blasters and jetpacks and doesn’t use hand to hand combat, go ahead and check this game out.