I was glad that I came across Vampire: Master of Darkness. I wanted to avoid any of the mainline Castlevania games to save them for later. When I queued this up, I was surprised at how the game closely resembled the original Castlevania on the NES. Aside from having another horror title to play this month, I finally have the chance to write about a game for the Sega Master System. 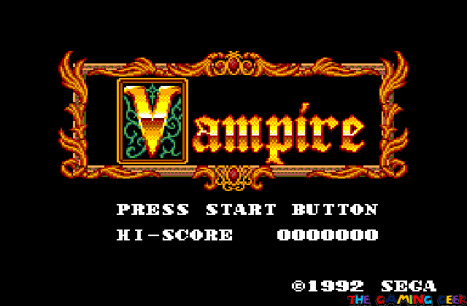 Title screen for Master of Darkness on the Sega Master System.

Let’s talk about the very first Master System game that I played until the end – Vampire: Master of Darkness.

Vampire: Master of Darkness is an action platformer that was developed by SIMS Co LTD. Sega published versions of the game for the Game Gear and Master System. I actually ran across the Game Gear version first, but when I read that the Master System version was better, I opted to play that instead. In the game, you take on the role of Dr. Ferdinand Social, a psychologist who is investigating a series of serial killings in London. 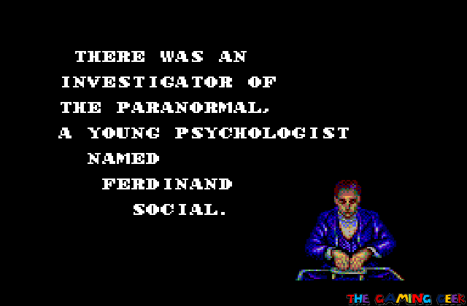 You’re just playing as a normal psychologist named Ferdinand Social in this game.

It’s amazing how similar this game is to the original Castlevania. The stages move mostly from left to right and consist of flat platforms. You will have to move up and down a lot of stairs too, and this game’s stairs work almost exactly like they do in classic Castlevania titles. Sometimes, the stages will have verticality to them.

You’ve got a health meter (called a life meter) in this game. You start the game with three lives and you can get more by getting extra life power ups. The game does not have any difficulty options. And as far as I can tell, you’ve also got unlimited continues. The game doesn’t have any options to change difficulty, nor does it have a password or save system.

Given that Vampire: Master of Darkness is an 8-bit game, your options for moves are limited. Dr. Social can walk to the left and right, and he can also jump. He can crouch, and he can also move forward while crouching. He can attack using his primary weapon or his secondary weapon. His starting primary weapon is the knife. Every time you respawn after dying, you’ll go back to having this weapon equipped. The knife is the weakest and has the shortest range out of all the primary weapons. 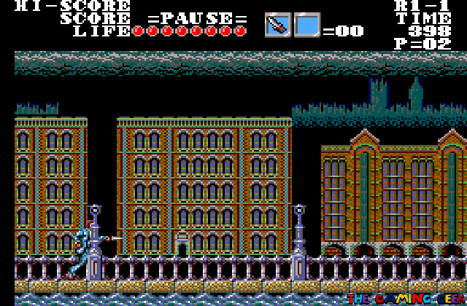 Your default primary weapon is the knife.

Later on, you’ll be able to replace your knife with a cane, a rapier, or an axe. The latter two are the best ones. Whether you’ll use the rapier or axe will depend on what is more important to you. The rapier has longer range, while the axe does more damage. Attacking with the rapier almost looks like you’re using the Belmont whip! 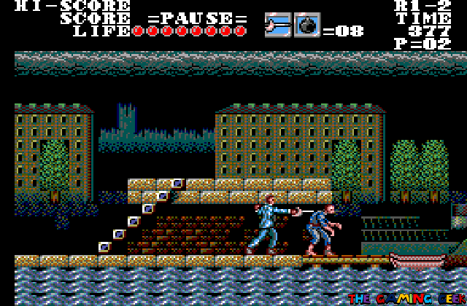 The rapier is my preferred primary weapon.

For secondary weapons, you may find a revolver, bombs, or boomerangs. Each type has it’s own inventory/ammo count. Whenever your secondary weapon gets replaced, how many you have will reset to the starting value. So it’s best to stick to one type as much as possible. 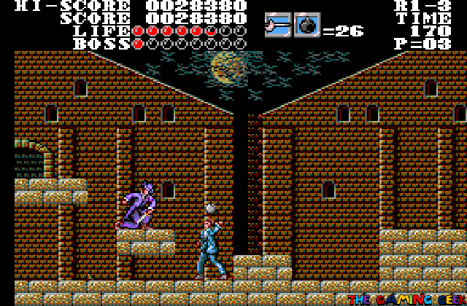 Bombs are thrown upward, so they’re good for attacking enemies above you.

My secondary weapon of choice are the bombs, because they are thrown upward. The revolver just shoots bullets forward, and I never had the chance to try out the boomerang because I didn’t want to let go of my bombs. The only other secondary weapon that I used were the stakes. Knowing vampire lore, I had a feeling that stakes would be helpful later on (and they were).

I don’t think I can avoid comparing Vampire: Master of Darkness to Castlevania because they’re quite similar. So I’ll do just that! To get items in this game, you’ll need to destroy masks instead of candles. They’ll contain items that will add to your score, primary weapons or secondary weapons. Sometimes, they’ll have these red potions that will refill your life meter. 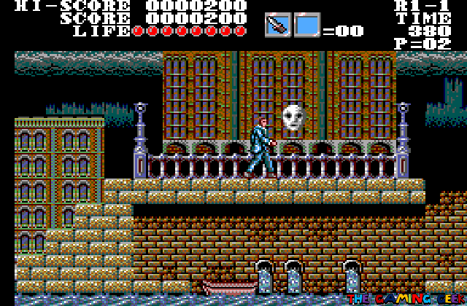 These masks will give you different items after you destroy them.

You can also find red potions in walls, just like how you can find pieces of meat in Castlevania. Now I think this gives this game an edge over Konami’s franchise. I’d be more open to drinking a potion than eating meat that I found inside a brick wall. 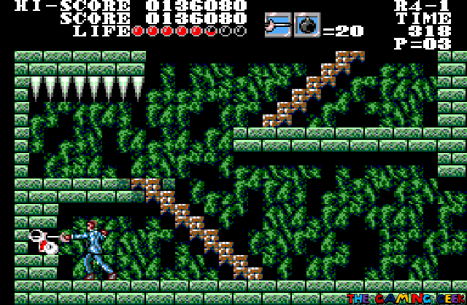 Thank the skies for city builders who thought of hiding these red potions inside walls!

This game also has stairs, and they work in a similar way. You can’t jump on these stairs. In order to move up or down stairs, you need to enter them from the top or bottom end by pressing up or down. A big improvement in Master of Darkness is that you can attack while on stairs. You can also jump off of them too. These stairs can lead you to different screens so check the floors to see if there are stairs leading down. 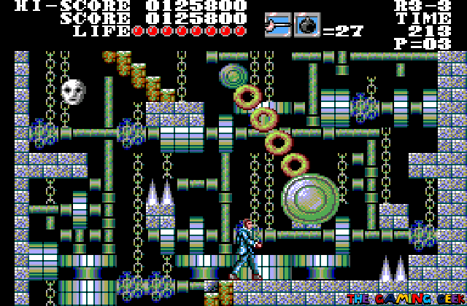 This area was definitely inspired by Castlevania.

Early in the game, I can see how the developers were trying to distance their game from Castlevania. But they were able to only go so far. At around the halfway point, the game will really start looking like Konami developed it. This is around the time that you start exploring castles.

While Vampire: Master of Darkness is the first Master System game that I’ve played up to the end, I’ve tried playing other titles as well. And this game is one of the many titles that really shows how powerful the Master System is compared to the NES. I love how the developers used colors in this game’s stages and sprite design. 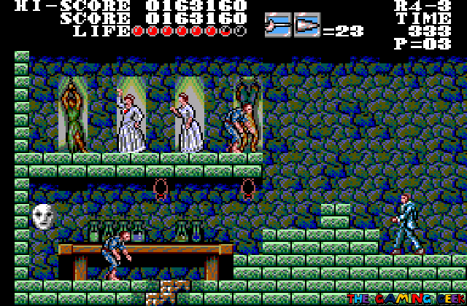 The game’s stage backgrounds have a lot of detail in them.

As for the music, this game has pretty competent sound design too. The sound effects are excellent, and the stage themes are very good. I think some of the themes could have used a few more bars before looping, but that’s a minor nitpick. 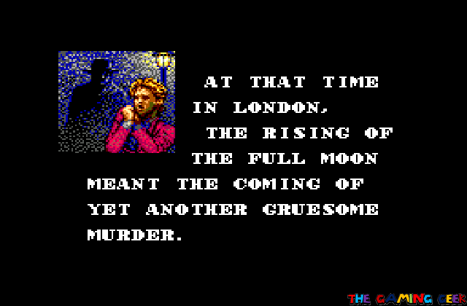 The intro cutscene does a good job of relaying the premise of the game.

Another thing that this game has going for it is it’s presentation. You’ll get a lot of text-based cutscenes in the game, and they do a good job of telling this game’s storyline. Some bosses even have text dialogue before and after you beat them. 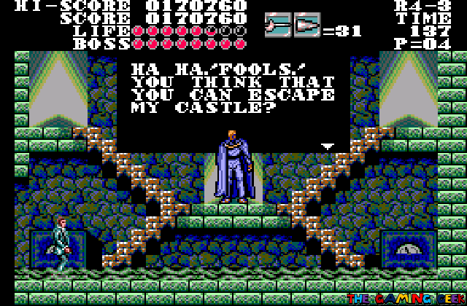 Is this Dracula? Play the game to find out!

These little things helped increase my immersion in the game. Aside from just moving from stage to stage, I actually felt that the story was progressing.

Is Vampire: Master of Darkness a Castlevania rip-off? It’s hard to say no, because it is very similar to Konami’s popular series. I guess the developers had a different enough product to not get into any legal issues. But is this a good game? In a lot of aspects, yes!

It might not offer the same challenge as classic Castlevania titles, but being an easier game made it more accessible to someone like me who just wants to play video games. Having a setting that’s closer to reality, with a protagonist that’s more relatable, made me appreciate this game more.

Now, I wonder why Sega dropped this franchise. This could have been another franchise that would have helped them in their rivalry with Nintendo. Maybe having a protagonist named Dr. Social wasn’t such a good idea. I think this game deserved a sequel. One thing’s for sure: playing this game opened my mind up to the Master System. I’ll make sure to play a few more titles from Sega’s 8-bit console.

If you love classic Castlevania games but you’ve already played them all, check this title out. Vampire: Master of Darkness is a well made Castlevania clone that provides an enjoyable gaming experience. Just don’t expect this game to offer much of a challenge.

Check out the other Master System games that I played and wrote about here!