Even before I considered trying out games for the Master System, I already heard about how good the version of Batman Returns that was released on that console. It did look good when I first checked it out, but I never really committed to playing it until recently. Boy, was I missing out on such a hidden gem! 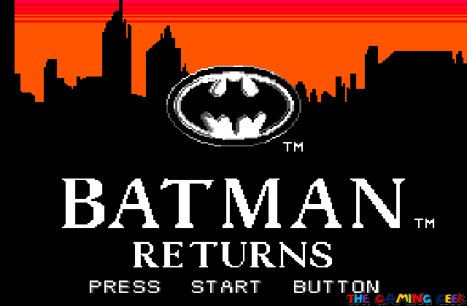 Title screen for Batman Returns on the Sega Master System.

Batman Returns for the Sega Master System is an action platformer that was developed by Aspect and published by Sega. There’s also a version for the Game Gear that’s essentially the same, but with a more boxed-in view. These games are based on the 1992 film of the same name. As Batman, you’ll go through five stages that re-enact the events of the movie. 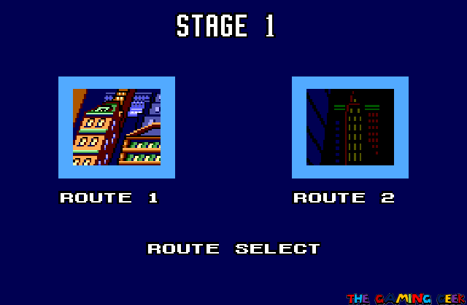 Except for the final stage, you’ll be asked to choose between two different routes.

One aspect of this game that I liked a lot is how it presented difficulty options to the player. Instead of offering a Hard difficulty setting with tweaks to the gameplay like tougher enemies, this game will ask you to choose between an easier route or a harder route. And the harder route is completely different from the easy route. My only complaint involves the final level, which only has one route which was quite difficult. 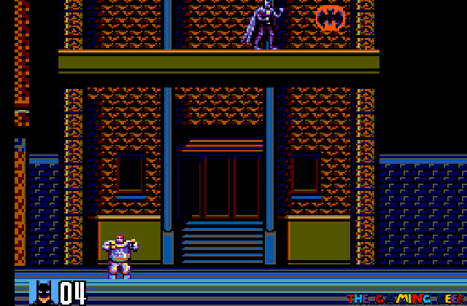 Get as many of these as you can.

You don’t have a health meter in this game, so one hit will kill Batman immediately. You start with only three lives, but there are plenty of extra life power ups in the game. When you die, you respawn at the same point immediately so there’s minimal backtracking. And the game seems to have unlimited continues too. Unfortunately, there is no password or save system.

Since this version of Batman Returns is on an 8-bit console, Batman’s moves are a little limited. He can walk, crouch, and jump. He can jump down from thin ledges if you press Down and the Jump button. According to the manual, getting the yellow Bat-symbol will make Batman move faster. 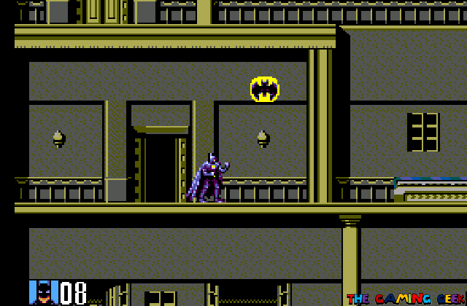 This will make you move faster.

He’s also got the ability to glide after jumping if you hold down the Jump button and haven’t used up the grappling gun yet. Gliding does help you reach farther, but it doesn’t kick in right away so it’ll only help if you’re trying to go to a lower level. 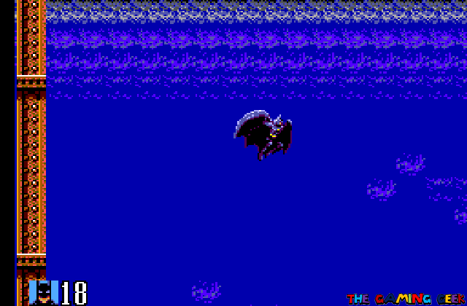 You can do a cape glide in this game.

Batman fights using Batarangs exclusively here. You can toss only one, but it always goes back to you and can also damage enemies on the way back. Regular enemies die from one hit so you shouldn’t worry too much about having only one. By default, the Batarang doesn’t go very far and it moves a little slow. 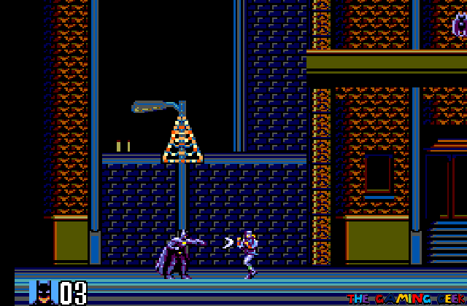 The default Batarang only has a short range.

Getting the gray Bat-symbol power ups will make your Batarang go faster and farther. At most, I’ve seen it go as far as the end of the screen. However, the Batarang will go back to it’s default speed and range whenever you die. 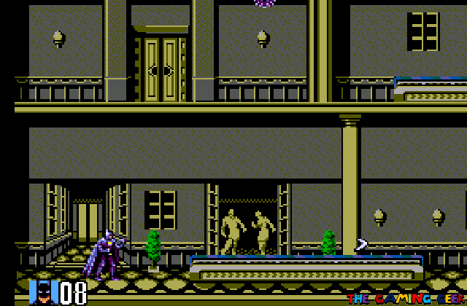 You can hit enemies from really far away when your Batarang is fully upgraded.

Batarang upgrades are plenty but it’s best to avoid dying. If you know where the upgrades are, you can opt to save them for later use and avoid getting them when your Batarang is fully upgraded.

Batman Returns is designed around mastery of the grappling gun, so I dedicated an entire section for it. You can fire this using two methods. The first one will require you to press up and Jump. You can do this while on the ground standing or in the middle of a jump. This shoots out a length of rope straight upwards. 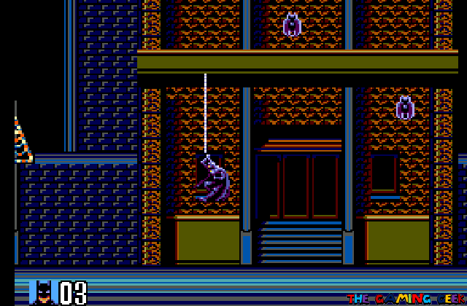 Using the grapple gun to attach to a ledge above you.

If it hits a ledge, it’ll attach itself to it. Pressing Up or Down moves you accordingly. If the ledge is thin enough, you can jump up through them. If you have enough slack, you can swing backwards and forwards using the Left and Right buttons. This will help you build momentum so that you can swing forward a distance and either jump to or grapple towards another ledge. 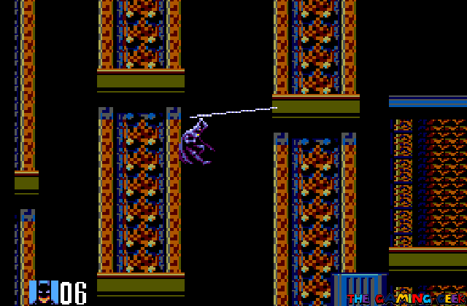 The game will require easy grapple swinging at first…

Which leads to the second method of firing your grappling gun. Pressing the Jump button in mid-air will fire it. By default it fires diagonally upwards and forward. Through this method, you can continuously swing forward without even touching the ground. 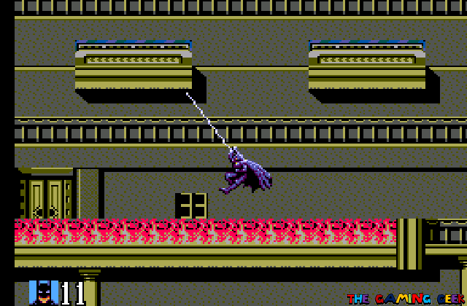 …and more challenging obstacles later on.

A lot of the game’s challenging platforming involves grappling, so you will really need to master it. It works fine for the most part. The controls are responsive enough, and most of my failed grapple attempts are due to incorrectly pressing Up.  However, the window for latching unto a ledge is a little strict. Sometimes, your line will go right past your target. Other times, your line won’t be long enough to hit it. 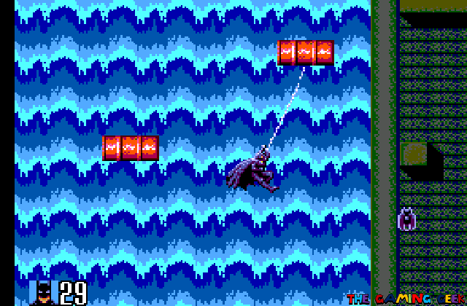 The final stage will test your grapple skills!

One more note: this works as an attack too. You can damage enemies with your grapple line, including bosses!

I was impressed by the graphics of Batman Returns. I can’t believe that 8-bit games could make use of so much color. Al the sprites are quite detailed and don’t consist of just one color in different tones, unlike what I’m used to with NES games. Catwoman looks like Catwoman, and the Penguin looks like the Penguin. 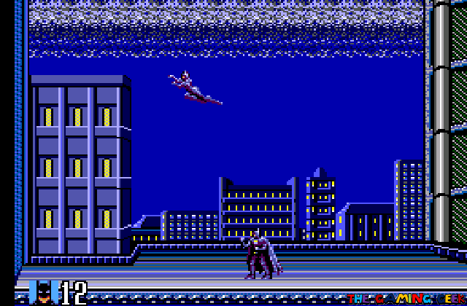 The rooftop battle with Catwoman. 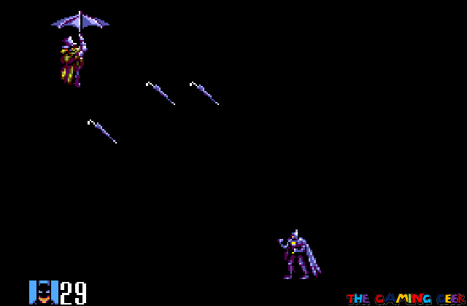 The battle with the Penguin is a little jarring because there’s nothing in the background.

As for the sound, my only complaint is that there are only a handful of music tracks that are reused. But they’re tracks that are quite memorable, good enough to give Sunsoft a run for their money. Sound effects are also perfect for the actions that they are depicting. 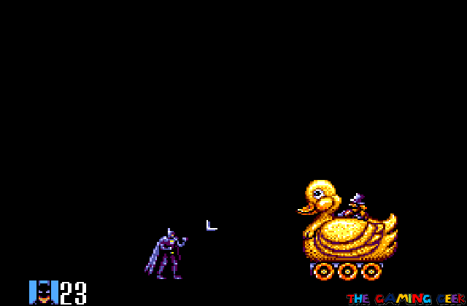 Battling Penguin in his duck vehicle.

In terms of presentation, there are a few nice touches here and there like having Batman’s face in the HUD and the power ups being Batman-themed. But that’s about it. This game could have used a few static cutscenes to help drive the story forward and increase immersion. Even plain text scenes that provide more narrative would have helped.

I really liked Batman Returns for the Master System a lot. The difficult platforming in the later stages is balanced by the abundance of extra lives, having unlimited continues, and respawning immediately where you died. The graphics are still nice to look at even today thanks to the capabilities of the Master System. It’s a nice contrast to the NES version of Batman Returns, which was a beat ’em up game instead of a platformer. The game is also a good way to revisit the classic Batman Returns movie because it represents the source material quite well.

I strongly recommend this game to Batman fans. It plays well and it provides a good Batman experience. I would even go as far as say that this is probably one of the best Master System games that are available, so if you’re collecting games for that system, make sure that you get a copy of this.