I didn’t think I could do it but I finally beat Mega Man X3. I was at the verge of quitting, but I didn’t and I’m glad I persevered. Beating this game was such an accomplishment for me, I decided to write an entire post about it. Mega Man X3 comes from an era wherein games were a real challenge. We even have a name for this – “NES hard”, or “Nintendo hard” which believe it or not, has it’s own Wikipedia entry. So beating this game feels a little more special than the usual experience. 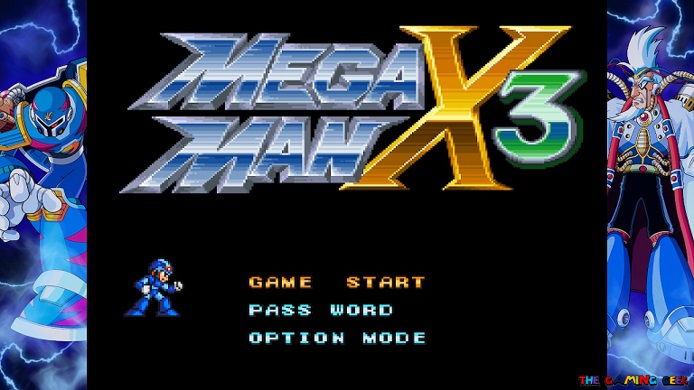 Title screen for Mega Man X3. This version is part of the Mega Man X Legacy collection for the Nintendo Switch.

I bought the first volume of Mega Man X Legacy Collection for the Nintendo Switch when it was on sale some time ago. The collection had the first four Mega Man X games, and these are considered the best of the franchise so I wanted it in my library. I had already beaten Mega Man X and X2, and I heard that Mega Man X4 isn’t that hard. I know I could beat Mega Man X4. So it would be a shame if I couldn’t beat Mega Man X3 and won’t be able to cross this off my backlog.

Getting through the majority of Mega Man X games isn’t that hard. You just need to find a few health and armor upgrades and a Sub-tank or two. Then, you need to beat one of the eight bosses with the default X-Buster weapon. Once that’s done, you just need to find out which boss is weak to your newly earned powers. The more bosses you beat, the more powers you get. Some of these will let you gain access to more upgrades and Sub-tanks.

With time, you can figure all this out on your own. I don’t have the time for it so I used guides to get a helpful nudge in the right direction. Believe me, knowing how to do something isn’t enough – you need to have the reflexes to actually execute to beat these games. So I’m not at all ashamed that I needed a little help.

What makes it difficult to beat Mega Man X3 and it’s predecessors is the last level. Which is usually a series of three or four sub-levels, each with their own set of challenges. These sub-levels usually have a boss waiting at the end, and the second to the last of these involve fighting the game’s eight bosses again in a boss fight gauntlet. Each title’s final boss comes in multiple phases and are usually the hardest boss fights in each title.

You can’t save your progress in between these sub-levels. If you don’t manage to beat the game and want to try again another day, you’ll have to tackle the final level from the beginning. The password system for the first three Mega Man X titles don’t keep your Sub-tank information, so you need to keep refilling them every single time you try.

I slowly built up to the final stage by playing bits and pieces of the game during my free time. Usually, I was able to beat a stage or two. I also worked on getting all of the upgrades. So I did all of the busywork ahead of time.

The most important part of the preparation was picking out the day when I would be making my first attempt to beat Mega Man X3. Because I won’t be able to save progress, I need to get through the final level in one straight attempt. Since I’ve never seen the final stage, I have to plan for failures and re-tries. I also needed to make sure that I had minimal distractions. These games are so challenging, the smallest misstep can mean complete failure. Thankfully, we had a couple of holidays so I had almost an entire day to make my attempt.

I didn’t know that I would be tested as early as the first sub-level, but I was. I almost quit the game because of this first major obstacle.

After several tries, I still couldn’t beat it. It was quite frustrating, because before the closing walls, I had to navigate a series of air dashes and wall jumps. After consulting Reddit, I learned that by holding on to the Dash button, you could do higher wall jumps. After a few more tries, this happened.

Glad I didn’t quit here. By the way, I tried this level again several days after, and I managed to make it past the closing walls again. So it wasn’t just a lucky try.

Just a bit from the closing walls was something that made the rest of the attempt easy. The Hyper Chip was an upgrade that gives X four important abilities: (1) the ability to air dash twice, (2) the Hyper Charge, (3) increased damage reduction, and (4) health and Sub Tank regeneration when standing still.

Even if I had to face several more bosses, I could just take a “regeneration break” after every battle. It was quite easy to get to the final boss battle with full health and all four Sub-tanks completely filled up. All I needed was time and patience.

The First Battle – Sigma’s Back

After a sequence that requires some wall jumping and tricky air dashing, you finally face the game’s big bad – Sigma. His first form’s attack patterns can be hard to figure out at first because his attacks are so fast. Instead of learning his moves, I was trying to react to them, which was quite impossible. Even after consulting a guide, I couldn’t perfectly execute what needed to be done.

This battle isn’t just about beating Sigma, but beating him while conserving as much health as possible. I was able to beat Sigma in my second attempt, but I didn’t have enough health left over for the next battle. It took me several tries but I finally managed to get the pattern down. I was so tense that I wasn’t able to record it, so I went back and did a poor reenactment.

In retrospect, this battle isn’t too hard if you knew what to do. It does require some more tricky wall jumping and air dashing, but it’s not too difficult. I can imagine some who could get through this battle unscathed.

As always, Sigma doesn’t go down that easy. He’s got a second form that also took me several attempts to figure out. Similar with the closing walls, I really didn’t think I could beat this. By this time, I had already been playing the game for four hours, with short breaks in between. Going through the previous stages had made my left thumb sore.

But I knew that if I had given up then, I’d have to go through all this again. And I wasn’t sure if I’d find as much uninterrupted free time as I had that day. I kept telling myself “one more try”, until I noticed that I was conserving more and more of my health and Sub-tanks. Eventually, this happened.

What makes Sigma’s second form difficult is his hitbox. The only vulnerable part of him is his head, and you only have a small window to shoot it from. Only charged shots can damage him, and because of his height you need to do some wall jumping or wall sliding.  He also attacks with a barrage of different projectiles which cause heavy damage.

In order to beat Sigma’s second form, I had to learn when to shoot him. I also needed to figure out that I shouldn’t be reacting to his projectiles, but I should be leading them. His missiles and bombs home in on your position but they’re not quick. If you give yourself room, you can dash or jump out of their way.

There’s a short final section after the battle with Sigma’s second form that could kill you off if you’re not careful. I’m embarrassed to admit that I actually died here my first time. I was a little worried, because I might not be able to beat Sigma again. But I did, and I was able to fully beat Mega Man X3.

I’m really glad that I didn’t give up despite all the failures and frustrations that I experienced. It feels good to be able to beat Mega Man X3. I should be able to add Mega Man X Legacy Collection to the list of Nintendo Switch games that I’ve beaten once I beat Mega Man X4. That makes me feel that the money I spent on buying that was effectively spent.

More than that, I think video games do help people learn to be patient and to keep trying. Because I was seriously frustrated at certain points in my playthrough. By taking breaks, calming myself down, and trying again, I was able to push through.