When Hyrule Warriors: Age of Calamity was first announced last September 2020, I was very excited. I loved The Legend of Zelda: Breath of the Wild so much, but even I can’t deny that it didn’t do a good job at filling in the blanks on what went wrong when Hyrule’s champions attempted to defend the land against Calamity Ganon. This spin-off promised a more detailed glimpse of that, so I knew this game would be a Day One purchase for me. 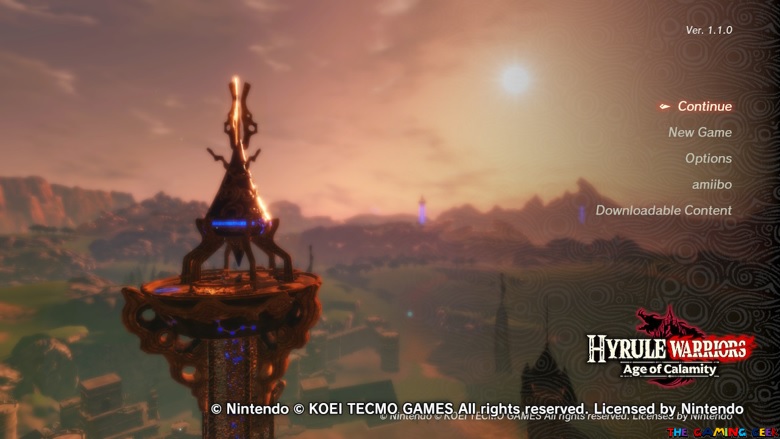 Title screen for Hyrule Warriors: Age of Calamity for the Nintendo Switch.

Did Hyrule Warriors: Age of Calamity fulfill my expectations? Will it meet yours? Let’s talk about the game today.

Hyrule Warriors: Age of Calamity is a hack and slash game developed by Omega Force and published by Koei Tecmo in Japan and Nintendo in other regions. It is the second game in the Hyrule Warriors franchise. Centered around the world of Breath of the Wild, it’s premise revolves around a small and mysterious Guardian who awakens just as Hyrule’s forces are at the brink of defeat. For unexplained reasons, it is able to travel back through time, placing this game around 100 years before Breath of the Wild.

I highly recommend that you play Breath of the Wild before you play this game. Even though this happens first in terms of chronology, this game was designed and presented in such a way that it would be appreciated best by people who already have a good working knowledge of Breath of the Wild. 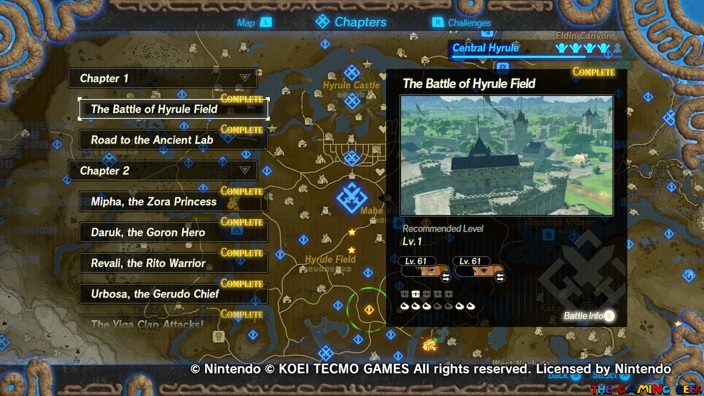 Each chapter and sub-quest takes you to a different part of Hyrule.

Unlike Breath of the Wild, Age of Calamity focuses on large scale battles. This game is played across different Chapters, and each Chapter is divided into separate sub-chapters. These sub-chapters represent different battle-centric events that occur in specific areas of Hyrule. The game can be played in single player or two player co-op. I’ve only played in single player mode though. 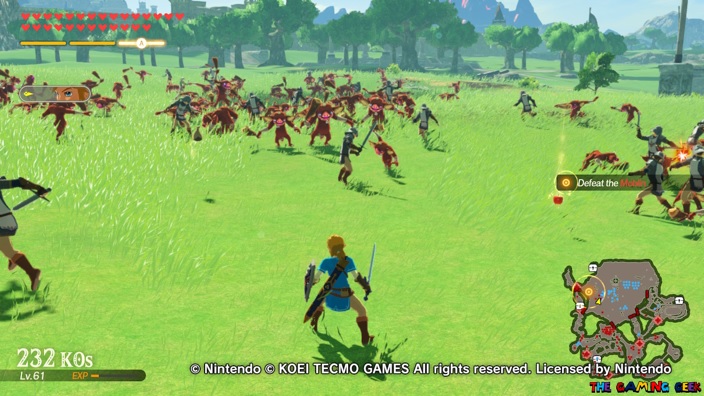 People complained that there weren’t a lot of enemies in Breath of the Wild. In Age of Calamity, you’ll battle thousands of them.

And when I say large scale, I’m talking about hundreds of soldiers. Some battles can even have thousands of them. Combat revolves around quickly eliminating as many of the weaker enemies, which I’ll refer to as minions, to build up your special attack meters. You will then have to deal with stronger enemies, which I’ll call captains. There’s a little more to fighting captains than just hacking and slashing at them. Your regular and strong attacks will barely do damage against them. You’ll need to learn three special techniques so that you won’t have such a hard time with them.

The first technique that you’ll need to master is the Flurry Rush. It works the same way in this game – you can activate this by dodging strong attacks. When done correctly, time will slow down for the enemy, letting you unleash a flurry of attacks that will deal a lot of damage.

Enemy captains also have a weak point gauge (WPG), which is a hexagonal meter that usually appears after they perform strong attacks. Attacking them while the WPG is up will deplete it.  When the WPG is completely empty, the enemy captain is stunned for a short while, leaving them vulnerable for a special Weak Point Smash. Weak Point Smash attacks take out big chunks off of a strong enemy’s health, so you should aim to do as many of these as possible. 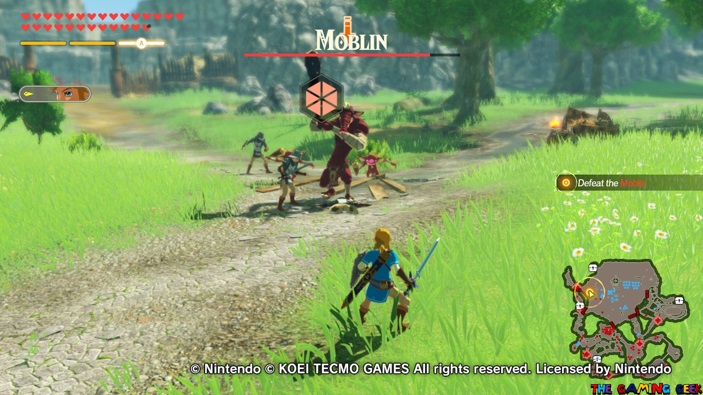 Stronger enemies have the Weak Point Gauge. When it appears, take advantage and empty it as fast as you can!

Sometimes, Sheikah icons will show up above enemy captains or bosses before they make an attack. These icons will indicate a vulnerability to one of the four Sheikah powers. If you use the correct Sheikah power, this will cause the enemy to stagger and the WPG to appear. Finally, you can also collect and use Elemental Rods in this game. Using the right Elemental Rod (e.g. Fire Rod on an ice-based enemy) will deal a lot of damage, cause them to stagger, and trigger their WPG. 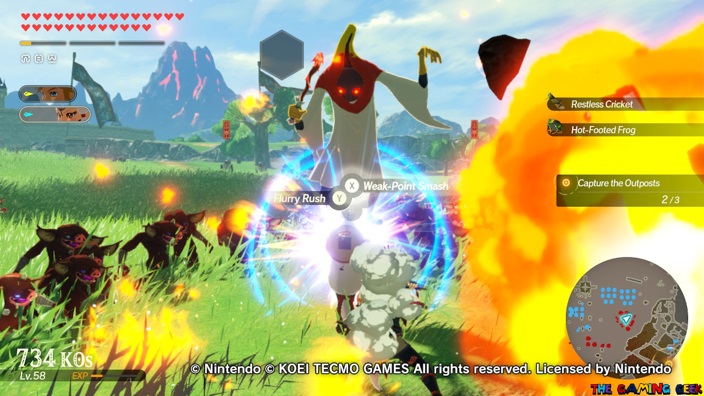 You should aim for as many Flurry Rushes and Weak Point Smashes as you can get.

Battling the weaker minions might be mindless hack and slash, but fighting enemy captains and bosses will require a lot of thought. You need to watch their actions closely and react with the correct counter if you want to overcome them.

You aren’t limited to playing as Link. You can also play as Zelda or any Hyrule’s four Champions. Most of the sub-chapters allow you to choose two, three, or four characters to play as. Of course, you’ll only get to control one character at any given time, but you can switch to a different one in the middle of that sub-chapter. There are some chapters that will restrict you to one character as dictated by the plot, but those are quite rare. 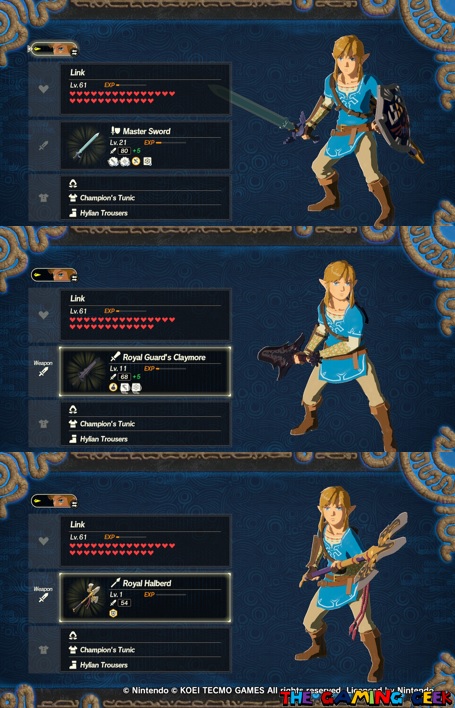 Link can also use more than one weapon type in this game.

The game features other playable characters, but I’m not going to talk about them to avoid spoilers. Instead, let me talk about the six characters that we already know are going to be playable based on the game’s cover and trailers, starting with Link. Similar to Breath of the Wild, Link can use different weapon types. He can use a sword and shield, a two-handed sword, or a spear.

Zelda fights with different combinations of Magnesis, Stasis, Cryonis, and Remote Bombs. Meanwhile, the four Champions utilize weapons that we’ve seen them use in Breath of the Wild. Daruk wields stone clubs as if they were large two-handed swords. Mipha fights with several spear type weaponry. Revali uses bows for long and short range combat. And Urbosa uses a sword and shield together with lighting-based attacks.

Aside from using different weapons and fighting styles, each playable character has their own variation of the Sheikah powers. So playing as Link will feel different compared to playing as Revali. I’ve played as every playable character and I can tell you that most of them are quite fun to play. There are a few duds, in my opinion, but the main cast are all quite good.

If you’re thinking about getting a copy of Hyrule Warriors: Age of Calamity, let me tell you about some negatives first. In terms of frame rate, this game isn’t as polished. It’s definitely fast, but there are moments when the visuals seem choppy. This wasn’t enough to impact my experience negatively, but that’s because I’m used to Nintendo’s hardware. Some people are dissatisfied with anything that’s less than 60 FPS, so buyer beware. I heard that this game is almost unplayable in two player co-op. I’ve never tried it, and never intend to, so I can’t say anything definitive about it.

If you’re also thinking about playing through the entire game as Link, you better reconsider. Each character has his/her own experience and levels. Like I said earlier, some chapters will require you to play as specific characters. If you don’t read ahead, you might end up with an under-leveled character on some chapters, which will make it really difficult. There are tons of additional challenges that you can play to keep all characters within appropriate level ranges. You can also unlock a special shop where you can pay Rupees for experience, which can help with the grinding. 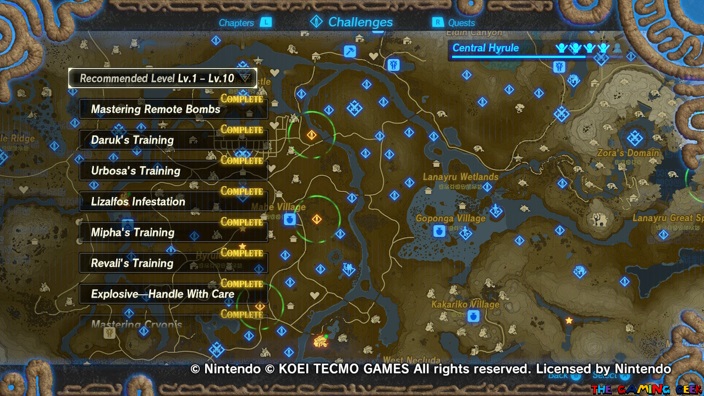 Challenges are non-story related stages that you can play to level up your characters and get additional rewards.

Finally, this game is all about hacking and slashing enemies. Some people may find that tedious and repetitive. I bought Age of Calamity knowing exactly what this game was going to be about. And I’ve been wanting a mindless hack and slash game for my Switch library for quite some time. I love playing these kinds of games sometimes, wherein I can give my brain a break.

Hyrule Warriors: Age of Calamity has a lot more to offer for Breath of the Wild fans. This game also has Korok hunting, with a handful hidden in each sub-chapter. You may find yourself replaying some of them while leveling up your characters. I loved looking for Koroks in Breath of the Wild, so finding one in this game often made me smile. 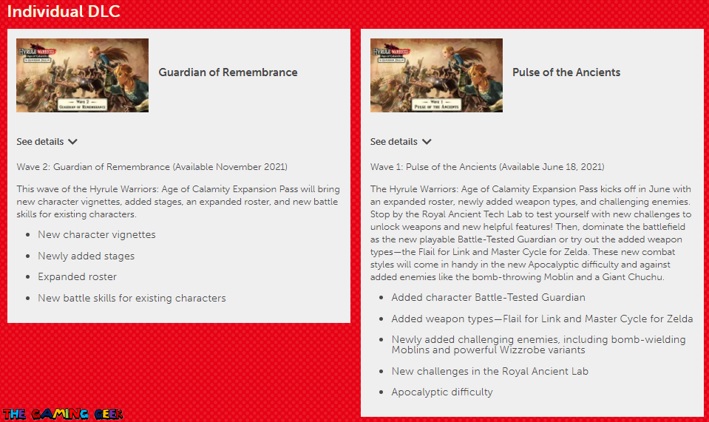 Age of Calamity also has a representation of the cooking mechanic, and more highlights that I don’t want to spoil. Once you beat the main story, there are a lot of additional challenges that can get unlocked. Finally, Nintendo has released additional paid DLC for it. Wave 1 features new weapons and a Guardian as a new playable character.

Like I said, I loved Breath of the Wild, and I wanted more of it. I also like hack and slash games – I make it a point to have at least one in every console game library. So Hyrule Warriors: Age of Calamity is a game that gave me exactly what I wanted, and more. I enjoyed experiencing an alternate story of what happened during Zelda’s and Link’s time. It was great to be in a position where I could change the outcome of that story.

Some of my favorite films feature large scale battles that I’ve always wanted to experience in some way. Two examples of this are the Battle of Helm’s Deep from Lord of the Rings and the invasion of Wakanda in Avengers: Infinity War. Age of Calamity is full of these battles, so even if I’m just hacking and slashing all the time, I was having a blast.