Wait a minute, why is there a Utah Jazz post in a blog about video games? Aren’t they a basketball team? While the content of my website is focused on video games, I’m a fan of games in general. And sports are games. Don’t worry, I’m not going to start writing NBA content because that really isn’t my area of expertise. 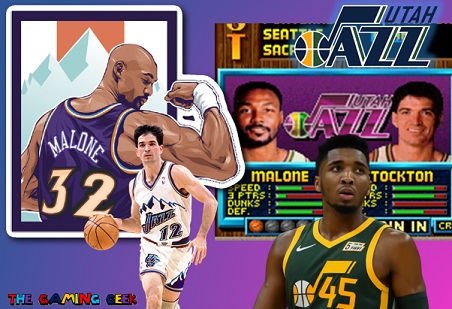 I’ve been a fan of the Utah Jazz since the mid Nineties.

However,  I’ve been wanting to write about this topic for ages. I just hadn’t seen the right moment for it, until now. The Utah Jazz had the best regular season record in the NBA this year. They’ve qualified for the second round of the NBA Playoffs. They’re matched up against the L.A. Clippers, who needed a full seven games to beat their opponents in the first round. So the Utah Jazz are a trending topic right now, but they might not be for long.

The Other Basketball Game

In my circle of friends, there were two video games that we played if we wanted some video game basketball action. The first and more popular one is Konami’s Double Dribble. Originally an arcade game, the Famicom/NES port was popular because it was easy to have a copy.

I didn’t like Double Dribble at all, and even today, I still don’t. You can choose from four different teams (Boston, New York, Los Angeles, and Chicago) but they’re all fake. That would have been fine, but the players themselves don’t even have distinct identities. Each player is the same in terms of visuals and stats. Choosing a team is essentially choosing the color that you prefer to play as.

The gameplay mechanics offer fast paced action but are quite weird for me. You can do a running three point jump shot and release the ball almost at the free throw line. The shooting animation lacks a few frames in between. Players can pass through each other as if they’re not solid. There’s a cool highlight view of dunks, but that loses it’s novelty quickly. Maybe Double Dribble isn’t as bad as I’m making it out to be. I’m completely biased because it doesn’t compare to the other game that kids back then were playing.

The Game That Started it All

Kids who were fortunate to have a PC had the chance to play Lakers vs Celtics and the NBA Playoffs from EA Sports. We didn’t need powerful computers to play this, and the entire game fit in a 3.5 inch disk so we could play the game on almost any MS-DOS computer. The filename of the game’s executable file is “BBALL.EXE”, so we all referred to this game as “BBALL”. 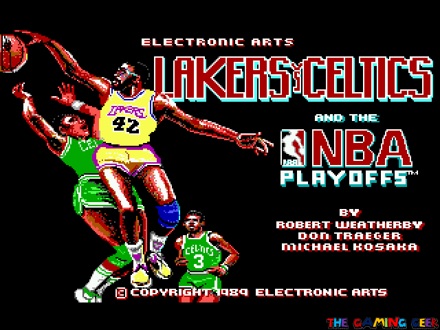 This game introduced me to the Utah Jazz.

This game features ten different NBA teams, eight regular teams and the East and West All-Star teams of the 1988-89 season. The eight teams that made the cut were among the sixteen teams who qualified in the 1989 NBA Playoffs. The Eastern Conference was represented by the Boston Celtics, the Detroit Pistons, the Chicago Bulls, and the New York Knicks. Meanwhile, the West was represented by the L.A. Lakers, the Seattle Supersonics, the Phoenix Suns, and the Utah Jazz. 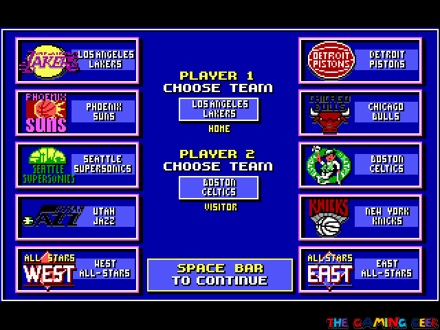 The game had a good selection of NBA Teams, which includes the best basketball team of all time: the Utah Jazz.

And these teams aren’t just for looks – they have the actual rosters from 1988-89 season. Each player, at least from my experience, has stats that match the talent of the player being represented. The Lakers have Abdul-Jabbar, Magic, and James Worthy. The Celtics have Bird, McHale, and Parish. And the Bulls have Pippen and Jordan.

This game has the entire team lineups too. If you play in Simulation Mode, there’s a player fatigue mechanic that will force you to use line up rotations so you can rest your starters. Not only did “BBALL” have twice as many teams compared to Double Dribble, I was able to play with actual NBA teams and players too.

Still, “BBALL” had a lot of limitations. The game is much slower when compared to Double Dribble. And you also worked around two buttons. So passing, shooting, blocking, rebounding, and swiping all share the two buttons. 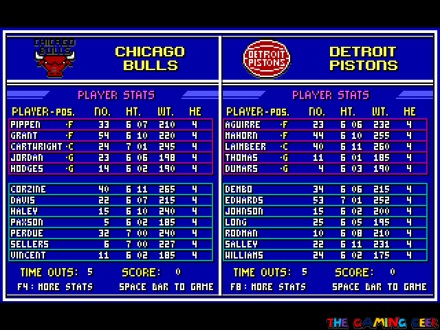 The Chicago Bulls and Detroit Pistons.

The biggest limitation of the game involves the graphics. While each player is different, there are only a few variations to how they look. Let me show you what I mean. 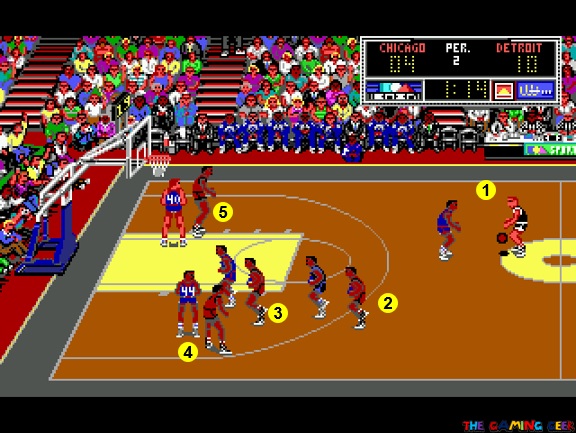 The Bulls are wearing red except the active player, who is in black.

You don’t have that much time to think about this while playing. The real way to tell who the players are is when they face away or towards you. You’ll be able to see their numbers then, but you need to memorize all that. 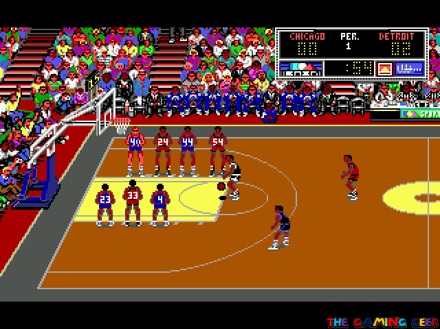 When their jersey numbers are showing, you can tell who the players are.

Choosing the Jazz is a Good Strategy

So it’s hard to tell who the players are unless you can see their jersey numbers. How did this make me a fan of the Utah Jazz then? Well, let me tell you why I started picking the Utah Jazz in “BBALL” by getting into their lineup first. 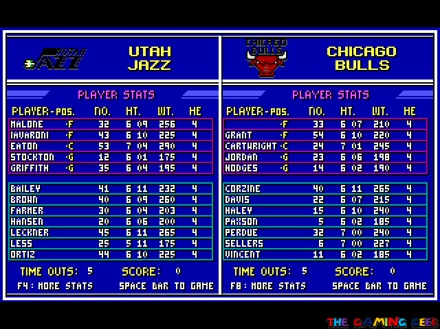 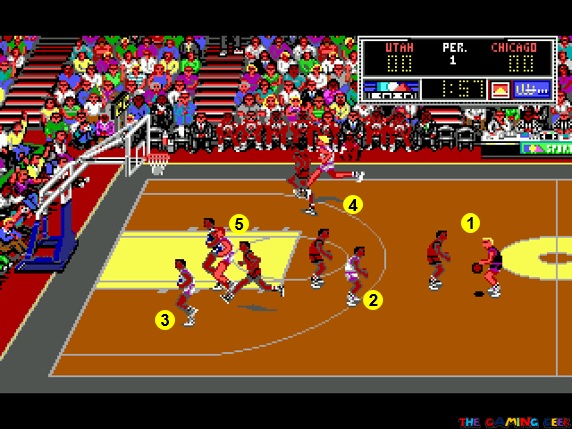 The Utah Jazz players are wearing white jerseys except the active player, who is in black at the moment.

Without seeing their numbers, I can tell you which player is which. Number 1 is John Stockton, because he’s blonde, short, and white. Player Number 2 is Darrell Griffith, the only short black player in the starting lineup. Number 3 is Karl Malone because he’s black and is taller than Number 3. Number 4 is Iavaroni, because he’s tall, blonde, and white. And Number 5 is Eaton, because he’s as tall and as white as Iavaroni but has red hair.

The diverse lineup of the Utah Jazz helped me play “BBALL” better because it’s easier for me to know who has the ball and whom to pass it to. I know which players should take the shots just by looking at them. I’m able to make decisions faster than if I chose another team. This diversity extends to the bench players too. I became really good with “BBALL” whenever I played using the Utah Jazz because of this strategic advantage.

NBA Jam and A Pair of Hall of Famers

Aside from the added advantage in “BBALL”, the Utah Jazz were led by two really good basketball players. Both Karl Malone and John Stockton are already in the NBA Hall of Fame. To this day, both are considered to be among the very best who played the power forward and point guard positions.

The next big basketball game arrived in the form of NBA Jam. Unlike Double Dribble or “BBALL”, NBA Jam featured two on two basketball matches. Well, if I needed to choose a team with two really good players, who was I going to choose? 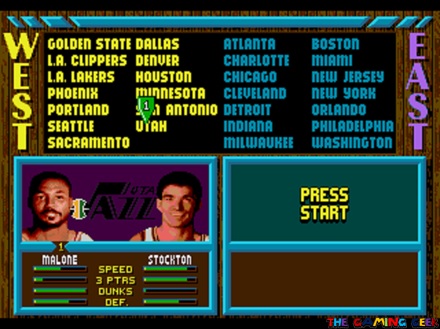 It was natural for me to keep choosing the Utah Jazz in NBA Jam.

The Jazz duo is a really good choice in this game. Both are above average defenders. Malone has a perfect Dunk rating, so I go to him if I really need to score points. Stockton has excellent Speed and is a good ball handler. His high 3 Ptrs rating helps me build leads and maintain them. Even if the game mechanics are completely different, I was so used to playing as these basketball players, so I became quite good at NBA Jam too.

The Utah Jazz Finals teams and the Future

The Malone-Stockton led Jazz teams also peaked at the right time for me. They had two consecutive Finals appearances (1997 and 1998), the only team to have faced Jordan’s Bulls more than once. Future Hall of Famers Shaq, Kobe Bryant, David Robinson and Tim Duncan all had to lose to the Jazz first before winning their championships. So it was easy for me to keep being a fan of the team.

Even when EA Sports moved on to their NBA Live franchise, the Utah Jazz remained good options for a video game player. Malone is a monster when it comes to inside scoring. In the various NBA Live games that I played back then, his midrange jumper was my primary offense. In these games, Malone is surrounded by really good three point shooters too: Stockton, Jeff Hornacek, and Bryon Russell. So I kept choosing the Jazz in these games too.

Eventually, the players got old and retired. The team dropped from playoff contention. But by this time, I was already a hardcore Utah Jazz fan. So I stuck with the franchise since then. Yes, that counts the Kirilenko non-stars era, and the Deron Williams/Carlos Boozer era. I continued to stick with them during Al Jefferson’s days, and during Gordon Hayward’s time.

I don’t think I’ve ever been this hyped about the Utah Jazz since the Malone-Stockton days. They’ve really got a great team this year, although they’re still unproven. They still run the same core play as before – the pick and roll – but tweaked to take advantage of today’s era. So I’m really really excited this year.

I’ve been a Utah Jazz fan for more than two decades now. Whether they make it to the NBA Finals or win the championship won’t change that. But it’ll be a lot sweeter if they finally win the trophy and do something that Malone and Stockton weren’t able to do. Hopefully, Donovan Mitchell and Rudy Gobert can lead this team all the way to the gold this year.