I remember playing the first X-Men video game released on the Sega Genesis a lot when I was younger. I never owned the cartridge but I rented it a couple of times. It was a popular game, especially since it supported two player co-op, but I had trouble enjoying it back then. I thought it was overrated, to be honest. I had the chance to revisit the game recently. Will my thoughts on the game change? Let’s find out. 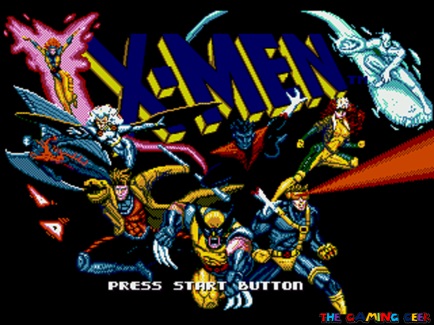 Title screen for X-Men on the Sega Genesis.

X-Men is an action platformer developed by Western Technologies Inc and published by Sega themselves. You can play with one or two players and can choose from four characters: Gambit, Wolverine, Nightcrawler, and Cyclops. This is a good selection, as three of these are the most popular ones from the X-Men lineup depicted in the famous Fox animated series. 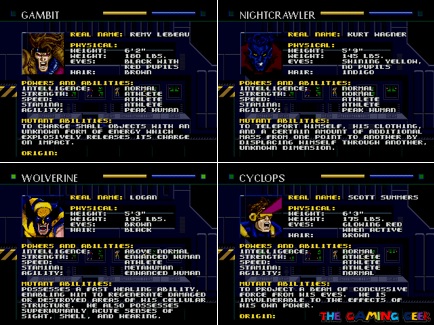 The character selection screen allows you to get to know more about the playable X-Men.

Each character only has one life, and the game doesn’t offer any continues. So if one character is low on health, its best to swap to another character. You need to be careful when swapping, however, as all levels have a limit to how many times you can swap (from one to three times).

The Playable Characters and the Assist Characters

Gambit makes use of his kinetic-charged playing cards as projectiles which has some homing capabilities. He can charge them further for more damage. He’s also got a staff that he uses for regular attacks, which give him a little more reach. Cyclops can aim his optic blasts at different angles and if he charges them up, they can rebound from different surfaces. Its a little hard to use in boss battles though, as boss characters move around frequently.

Gambit and Cyclops can use powerful ranged attacks.

Nightcrawler teleports and can use this as an attack or to dodge. He can even teleport across gaps and through walls, making some of the levels easier to traverse. Wolverine can put out his claws and make his punches do more damage. He also has health regeneration, but this is quite slow and he needs to be standing still with his claws retracted to work. He’s also got a special spinning attack with his claws out, but that consumes a fourth of his power bar.

Wolverine and Nightcrawler have abilities that make up for the lack of ranged attacks.

X-Men also employs an Assist mechanic wherein you can summon other characters to help you. Rogue flies in and punches an enemy close to you. Archangel swoops by thrice, shooting a barrage of sharp metal feathers each time. Storm has an all-screen wind attack that lasts a couple of seconds. Iceman is a different kind of Assist character in that he doesn’t attack. Instead, he forms an ice bridge that you can use to cross over wide gaps. Finally, Jean Grey is an “always-on” Assist that will catch you and bring you back whenever you fall into a pit, at the cost of depleting some health.

The Story, Visuals, Audio, and Presentation

The plot of X-Men revolves around Magneto infecting the Danger Room with a virus which makes the latter create dangerous simulations. This is a simple idea that allowed the developers to use different locations significant to X-Men lore. You get to explore places like the Savage Land, Excalibur’s lighthouse, and Mojo World as levels. 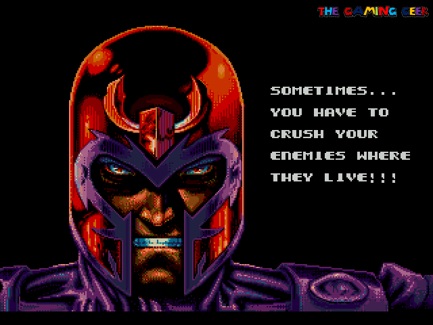 This also allowed them to use a variety of villains that wouldn’t be working together otherwise. So you get to fight famous X-Men villains like the Juggernaut, Sabretooth, and even Apocalypse, as bosses. For the most part, the villains are depicted well, with attacks and abilities based on their comic book versions.

The graphics of this game are excellent. The sprites for the heroes and villains are done well for the most part, and the playable characters are detailed and well-animated. Levels and backgrounds are average, with minimal additional animation or detail that would have brought them to life.

The music can be a bit of an acquired taste. The themes sound a little restrained in terms of volume. Aside from the Savage Land theme, I loved most of the level BGM. They’re all mostly catchy and definitely unique. The game’s sound effects are a mixed bag, with some that stand out for sounding out of place (the warning shrieks of the pterodactyls is one example).

The presentation of the game is excellent. It uses Jim Lee’s comic book art frequently. When you select characters, you feel like you’re going over their profiles in Cerebro. Being able to call on a good selection of other X-Men feels correct thematically as they do help each other out in battles.

I never beat X-Men back then because the game is brutally hard. As early as the first level, you can lose one or two X-Men. Its easy to drop from a platform and fall into a pit that you couldn’t see, or be hit by a spear from an enemy that is only slightly onscreen. The game’s platforms are easy to miss, as if the hit detection was set to allow no room for error.

Later stages employ other unfair mechanics like floors that phase in and out to quickly for you to even have proper bearings. The X-Men also suffer from Belmont syndrome – staggering backwards after getting hit. Often, you’ll land on a platform but fall backwards into a pit because of an enemy that you wouldn’t have known was there. When you die, you get sent back to the Danger Room to select another character. Any dead X-Men will stay dead until the last level. In case you had swapped to other characters, their health bars will remain depleted. 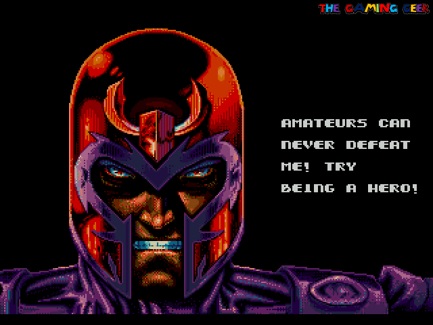 You can’t beat this game on Easy.

The game has three levels of difficulty – you can choose from Amateur, Hero, and Superhero. Ideally this would be the solution, but you can only play the first three levels on the easiest difficulty. The rest of the game is locked behind the normal difficulty setting. I would have preferred it if they locked a special ending as a reward for beating the game on normal or hard difficulty, and allowed less skilled players to experience the full game.

There is a level select cheat that can be done without additional accessories like the Game Genie. This would have helped make the game accessible, but the last stage is especially difficult. Even if you skip directly to that level, you’re going to have a hard time. The normal enemies of this level shoot a capture beam that restrains you. If you try to move while restrained, you take damage. It disappears after a while, but if you are slow to react you can get hit with another one.

One section involves jumping across platforms that fall almost immediately when you land on them. And you need to do that while you have drills speeding towards you. There’s another section that involves jumping on a disappearing moving platform. You need to crouch because there are lasers. You need to be able to jump off the platform before it disappears but after you’ve cleared the lasers, right into the sights of an enemy ready to shoot a capture beam. 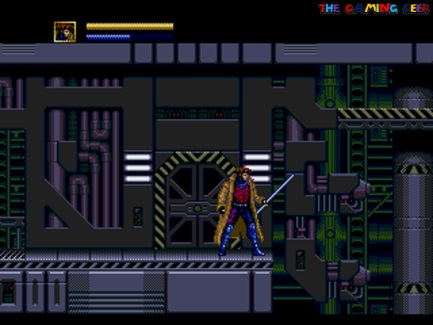 One of the hardest sections in the X-Men game.

It’s like the entire level is designed to make sure you consume some of your character swaps. If you manage to get to the final boss fight, the game will offer a full health and power recharge. But the final boss can kill you in four hits, and some of its attacks are hard to dodge.

I can’t talk about this X-Men game without mentioning what it’s most famous for. At the end of the level just before the last one, the game will tell you to “reset the computer”. This actually means you need to hit the Reset button of your Genesis/Mega Drive! This also locked out a lot of kids from progressing further, when the internet wasn’t an available resource. I’ve never played anything else that required something similar.

X-Men is a game with good gameplay mechanics, graphics, sound and presentation. You have a good selection of playable characters who function well. You get to visit important locations in X-Men lore and get to battle different X-Men villains. It would have been easy to recommend playing this game if it weren’t so insanely difficult. If you’re okay with playing a game but never beating it, give this game a try. It’s worth it just to experience resetting your home console as part of the gameplay.