I was really looking forward to Venom/Spider-Man: Separation Anxiety back in the day. This game is the sequel to Spider-Man and Venom: Maximum Carnage, one of my favorite 16-bit games of all time. Because it’s a sequel, it’s supposed to be better than the original, right? 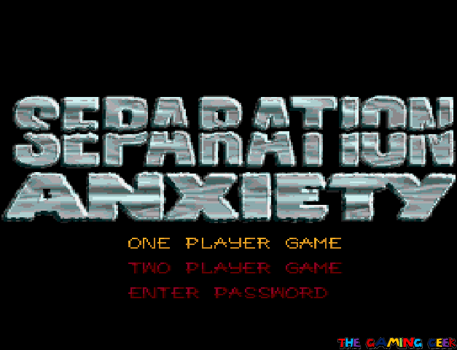 Title screen for Venom/Spider-Man: Separation Anxiety for the Sega Genesis.

No, it wasn’t. Let’s talk about this game today!

Like it’s predecessor, Venom/Spider-Man: Separation Anxiety is a beat ’em up game that was developed by Software Creations and published by Acclaim. The game was also released for the Sega Genesis and the SNES. For continuity, I’ll also be talking about the former in this article. The biggest improvement that this game has is the addition of a two player co-op mode.

Long-time comic book fans might recognize the title and think that this is based on the limited series Venom: Separation Anxiety. Back in the day when the internet wasn’t as accessible, I thought the same and was really confused after reading the comic books. This game is actually based on the limited series Venom: Lethal Protector. I understand the reason for the title-swap; Lethal Protector is too Venom-focused and Separation Anxiety has a good ring to it.

Battling Bomblast and Firearm with Hawkeye as an assist character.

The plot is centered on Venom and the Life Foundation, with the organization forcefully extracting five symbiote offspring from our anti-hero in order to create superpowered henchmen. The game doesn’t follow the comic book storyline completely though, leaving out a lot of details and making the story a lot more simple. When you start a single player game, you are asked to choose between Spider-Man and Venom. You’ll play as your chosen character for the entire game, which is the same for either character except for some changes to the text cutscenes.

You have a health meter and a number of lives in this game, starting with three. There are no continues, but the game does have a password system for saving your progress. And the game offers plenty of extra lives scattered across it’s stages. When you beat the game, you’ll get a password for Hard mode.

Separation Anxiety uses the same move set of Maximum Carnage. Both heroes can move in eight directions and can jump. There’s no crouching, and both can web-swing and climb walls. Both heroes attack via punching, and tapping the attack button results in multi-hit combos. The backflip, done by pressing back and jump at the same time, is also available here. 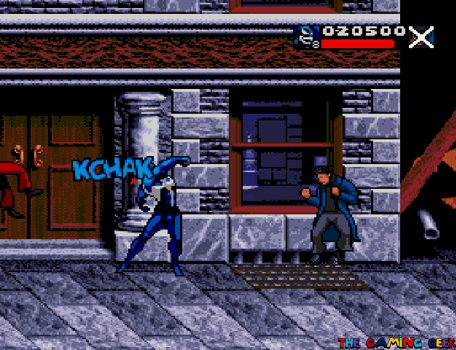 Venom’s combo finisher is an uppercut.

Both characters still grab enemies by moving towards them. While grabbed, you can punch an enemy repeatedly or throw an enemy after lifting them up first. You’re also completely vulnerable, so make sure you get rid of your enemy as fast as you can. 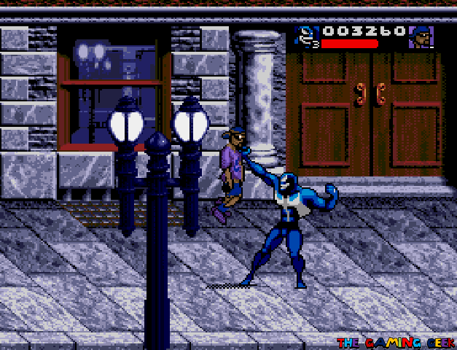 Act quickly when you grab an enemy.

When you manage to land all your attacks, your health meter will start to flash. This will enable your character to do a “Power Hit” attack which does a lot of damage. Venom still does his ground pound, and Spider-Man still does his spinning kick for this. 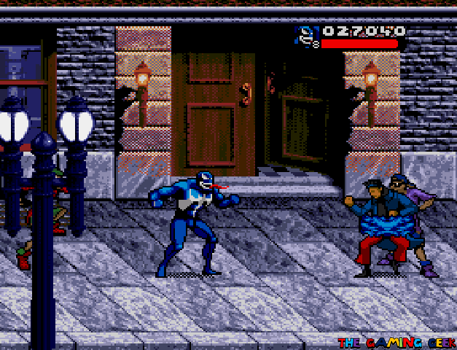 Restrain your enemies with webbing.

You can shoot a short web-line that restrains individual enemies from a distance, or you can shoot a longer web-line and pull them closer to you for a grab. There’s a wind-up to this move now, so it’s not as safe as it was in the previous game. 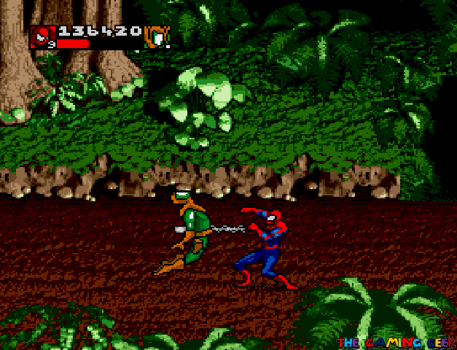 If you’ve got two enemies on both sides, you can do a double web-pull and slam them against each other! This is hard to pull off, but I learned that you can restrain one enemy to help set this move up. 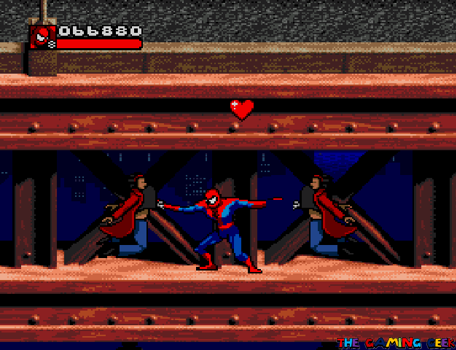 Bring people together with this move.

Rounding up the moves are their special spinning attacks that drain health, and the web-shield for defense. So they kept everything from the original and didn’t learn any new moves.

I didn’t like Separation Anxiety as much as I did the previous game for several reasons. Most of my issues stem from choosing the wrong source material. Maximum Carnage was a major event that spanned 14 issues, with a lot of guest stars and a long story. It centered around one of the hottest Spider-Man villains of that period: Carnage. 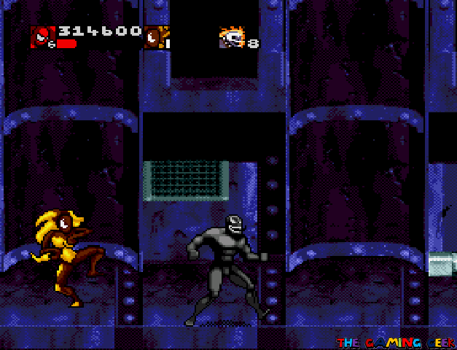 In comparison, Venom: Lethal Protector was a six issue limited series that only featured Venom and Spider-Man as the protagonists. They were pitted against newly introduced characters. Hardcore Spider-Man fans might remember the symbiotes, but I had to look them up myself to get their names and check what distinct powers they have. 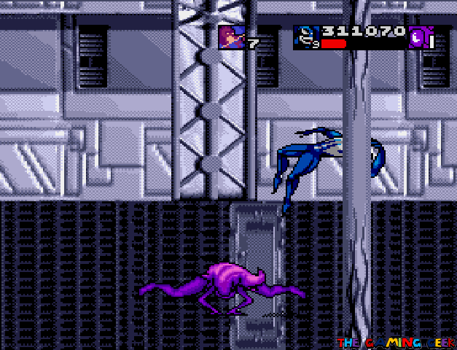 Agony, the other female symbiote. 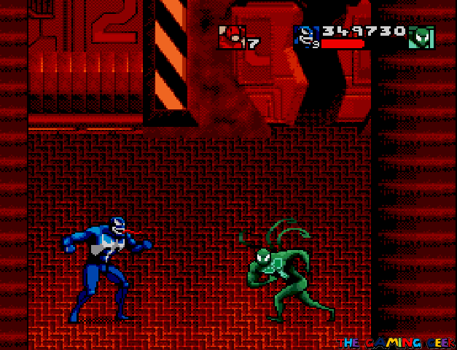 Wasn’t Lasher one of Santa’s reindeer?

Another set of bosses that are based on The Jury would’ve been a good contrast to the symbiotes because these characters are tech-based. There are five members of them but as far as I can tell, there are only four of them here. Bomblast and Sentry are pretty distinct, but the other two are just palette swaps of each other. 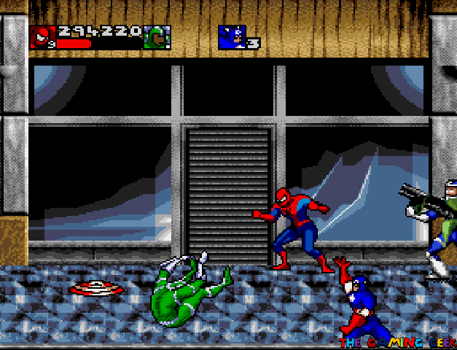 Neither the Jury nor the symbiotes are well-known right now, so I’m not sure how fun it’ll be for someone new to the Spider-Man world to fight these unknowns.

Beat ’em up games are already notorious for being repetitive. Separation Anxiety is one of the worst offenders here. The regular enemies are even more repetitive this time around. After the first stage, you’ll fight against different colored Guardsmen. These are body guards with the same set of armor and they all have the same moves: can shoot guns, toss grenades, and punch. And you’ll keep fighting them over and over. 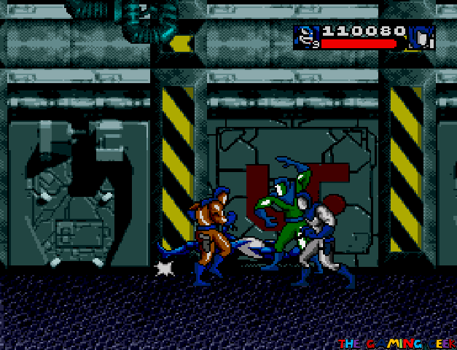 Get used to seeing these guys. 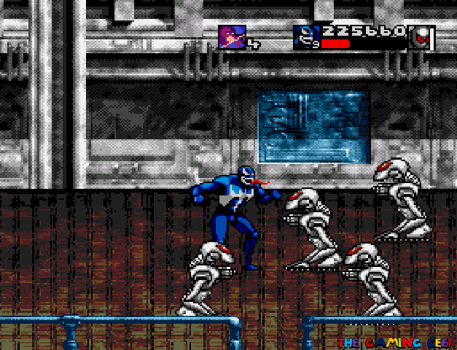 I wish there was some variation in the type of robots you’d be fighting.

So you’ve got bosses that are similar to each other, and the same regular enemies over and over from the second stage up to the end. Well there’s one more thing that makes this worse: the Trap Room. After beating a boss, you’ll often by taken to the Trap Room by Sentry (the less popular one). 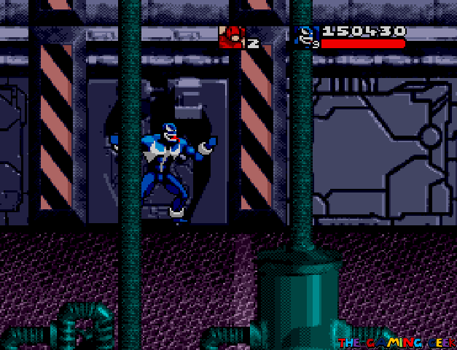 The Trap Room always starts with you breaking out of your restraints.

It’s essentially an area of the Life Foundation fortress that looks exactly the same. The numbers might be different, but you’ll still fight the same Guardsmen, drones, and security robots. Some Trap Rooms have power ups like extra lives or superhero summons. But going through these sections felt like the developers wanted to pad the game and didn’t have any different stage backgrounds available, so they reused the same area over and over.

Separation Anxiety has decent graphics, but being a sequel, it’s hard to avoid comparing this with the previous game. Somehow, this feels like a graphical downgrade. Sprites are a little smaller, possibly to adjust to the two player co-op mode. They’re still detailed, but they just don’t look as good as the previous game’s graphics did. It’s a little rougher now. 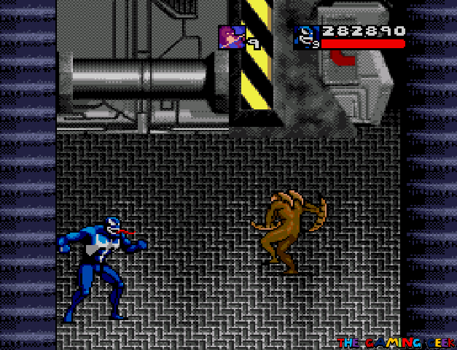 I was surprised by this game’s music. I didn’t think it would compare to its predecessor’s excellent soundtrack and it didn’t. But I still liked this game’s music a lot. It’s a little tough for me to objectively assess this game though, because I just completed several playthroughs of the SNES version of Maximum Carnage and that version simply has much better music. 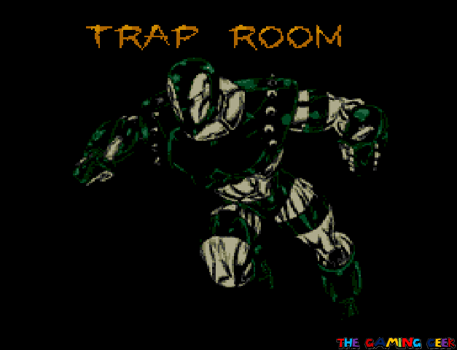 Transitions between stages make use of great looking character art.

For presentation, this again is a step backwards in my opinion. Gone are the cutscenes with comic book panels, replaced with text on plain black backgrounds. The game still makes use of comic book illustrations, but only in transitions in between stages. And of course, the art assets are reused all throughout. The game doesn’t even have a proper ending.

Venom/Spider-Man: Separation Anxiety is quite disappointing, but not because it’s a broken game. It still plays well, but the lack of variety in enemy design makes the game feel really repetitive. The story isn’t as good, the characters aren’t well known, and there’s no pay-off at the end. The graphics also suffer from a downgrade compared to Maximum Carnage.

The only reason for people to play this game is if they want more Spider-Man beat ’em up action and they’ve already played Maximum Carnage to death. Or a pair of buddies want to play as Spider-Man and Venom on a team up adventure. Otherwise, the original is still a much better game and you’re better off playing that.