I played The Punisher on Sega Genesis/Mega Drive this time because most superhero video games are based on Batman, Spider-Man, or the X-Men. I’ve seen different ways on how those superheroes could be represented in video games, so now I’m drawn to video games based on other characters.

The Punisher, also known as Frank Castle, as a character seems perfect for video games. He does a lot of hand to hand fighting and uses many different weapons. He’s got a decent rogues gallery too. Let’s see how Capcom did with their Punisher video game. 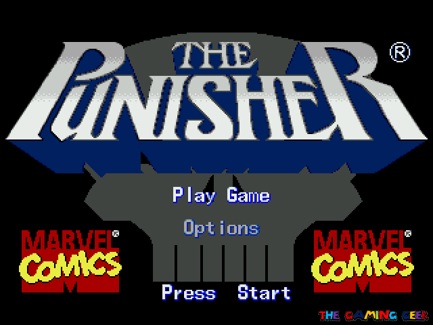 Title screen for The Punisher on Sega Genesis / Mega Drive.

The Punisher on Sega Genesis is a beat ’em up game developed and published by Capcom where you take on the role of the titular character. It’s a port of an arcade game with the same title. I didn’t have the chance to play the arcade version though, so I only have my experience with this port to talk about. This game can be played in single player or with two players.

The game’s introduction doe a good job of explaining Frank Castle’s back story.

Joining Frank Castle is Nick Fury, and you can choose him if you play in single player. Frankly, it’s a little strange to see him team up with Castle. Frank is a vigilante and fights crime, while Fury is an agent of S.H.I.E.L.D. which deals with terrorism. I guess Nick Fury is similar to Castle in that he has no powers and fights only with his hand-to-hand combat skills as well as a variety of firearms. I don’t think any other character could fill the role of a second player, so I can accept Fury’s inclusion.

Both characters have an array of different attacks that they can use. These range from a variety of punches, kicks, and throws. Both characters also have a Special Attack which drains health if they connect with an enemy. Its a little funny how the Punisher’s move is a spinning leg sweep while Nick Fury has a more impressive belt spin. Stages are on a flat plane and not on platforms, so you can move up or down and avoid attacks from enemies. Finally, instead of performing a dash, double tapping a direction makes the character roll. Unlike dashes, rolling works vertically as well and actually avoids high attacks like gun fire.

This game also allows the playable characters to fight with weapons dropped by enemies. The expected melee weapons are here: a pipe, a baseball bat, knives, and a freaking battle axe. You can also pick up and throw different stage objects like drums and potted plants. There’s a flamethrower that looks like a fire extinguisher that you can use, which does a lot of damage.

Each weapon breaks after a number of uses, and there is a counter that tells you exactly how many times you can use them. My only complaint is that they break too easy. But in the hands of enemies, these weapons are indestructible. They also will not drop the weapons even if you knock them down. They will only drop the weapons when they get killed.

Guns are quite effective and fun to use.

The Punisher was able to incorporate firearms and this was very interesting. Both characters have their default handguns which never run out of ammo, but they only use these if the present enemies have firearms of their own. I don’t know why they refuse to use this otherwise. Is it some sort of code of honor? They can also pick up automatic weapons like an uzi and what appears to be an M4 rifle. These have limited ammo but are quite powerful.

The firearms function quite differently too. The handgun shots hit the enemy closest to you regardless of their level on the plane and are auto hit. Meanwhile, the automatic weapons fire straight forward, so you need to be on the same level to hit enemies with your shots. So there is some strategy on which firearm to use and how to attack with them.

At first, I didn’t like the game’s graphics. But after looking at them up close, I actually think they’re good. Sprites have a good amount of detail. The Punisher himself looks good, with an accurate costume that even has his white leg holsters. It’s easy to differentiate enemies from each other. Even the boss characters are quite recognizable. I only have two complaints regarding the graphics, the first is how Kingpin’s sprite was done – Wilson Fisk is a little misshapen. The second has to do with the animation and frame rate. Sometimes, it feels like the sprites are missing a frame or two of animation, so actions don’t look smooth.

In terms of music and sound effects, there’s nothing bad but also nothing memorable. Tracks are able to match the mood that each stage wants to convey. The game has a sound and music test feature in the Options Menu, and I wish more games offered that.

The Punisher added some neat cutscenes to help bring the game’s storyline to life. These scenes helped explain the transition between levels. While the actual plot is pretty basic, it works in making you feel like you are in one of Frank Castle’s personal missions.

I do have a gripe about the villains featured in the game. There are different enemies but they all behave the same. They only look different and carry different weapons. I would have wanted them to have different abilities or at least each one favoring different moves. In Streets of Rage 2, for example, one enemy has an uppercut attack so you shouldn’t use jumping attacks against them. Another has a slide attack, and yet another prefers to run up close for a grab and throw.

Scully was a real character in the Punisher comic series.

In terms of the game’s bosses, I wasn’t satisfied. It was a surprise to see some members of the Reavers in this game because I’ve always known them to be X-Men foes. Aside from the Kingpin and Bushwacker, none of the other big names are in this game. There’s a regular enemy named Jigsaw, but I refuse to accept that one of Castle’s most dangerous foes is not a boss character. I wish that we saw a few more popular villains in the game.

The Punisher offers a fair and manageable challenge. Beating this game on Normal difficulty should be manageable to gamers with average skill. You are given three lives and two continues, so you will have plenty of chances to beat this game. However, you won’t be able to see the real ending until you beat the game on Hard difficulty.

I played this game twice just for you!

On Hard, the game becomes a real challenge. Most games of this genre can have up to three enemies on screen. The Punisher allows for four enemies without a drop in performance. So you have more enemies to deal with all at once. Each level also has timed sections, and you lose a life if you run out of time. The challenge involves not just staying alive and avoiding as much damage as you can, but also being able to dispatch your enemies within the allotted time. You can only extend your time by defeating a specific enemy and picking up the Ring item that they drop. 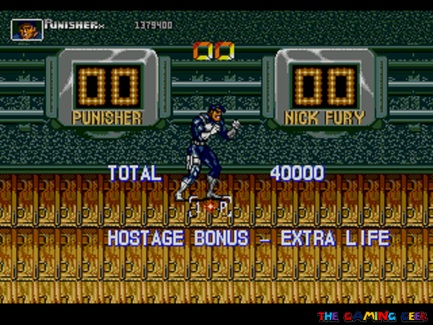 This bonus stage is critical.

You can’t earn additional continues in this game, and there is only one way and one opportunity to earn an extra life. There is a bonus stage where you have to shoot barrels that drop from the ceiling (ala Street Fighter II). If you manage to shoot all twenty, you win a bonus life. That’s it. So to see the game’s real ending, you really need to be good at this game. At least you can still play the game in it’s entirety even if you only play on Normal.

When talking about the best 16-bit era beat ’em up games, no one even thinks of The Punisher on Sega Genesis. In my opinion, this has more to do with the strength of the beat ’em up genre during this time. It’s hard to compete with franchises like Streets of Rage, Final Fight, or Golden Axe. It also doesn’t help that the Genesis port is overshadowed by it’s more powerful arcade counterpart.

But The Punisher is a game that is worth checking out, especially for fans of the beat ’em up genre. The addition of fire arms in gameplay and facing off against more enemies than usual is worth experiencing. I also highly recommend this game for any one who is interested in playing good superhero games.

For more video games based on Marvel characters, click here. And click here to check out every Sega Genesis video game that I’ve played.