I’ve heard a lot about the extremely hard difficulty of the Genesis version of The Adventures of Batman & Robin, so I almost didn’t play it. But recently, I found some Game Genie cheat codes that I thought would make the game beatable, so I gave the game a shot. 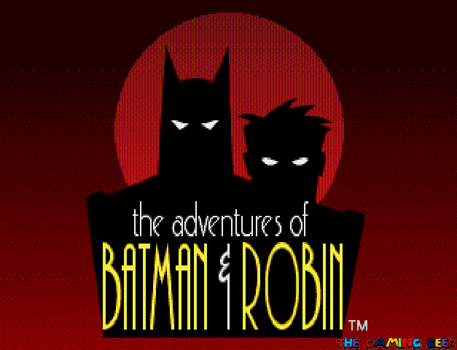 Title screen for The Adventures of Batman & Robin for the Sega Genesis.

Did cheat codes made this game more playable? Let’s talk about it today!

The Adventures of Batman & Robin for the Sega Genesis is a run and gun shooter that was developed by Clockwork Tortoise and published by Sega. I was actually surprised at this game’s genre, and if you have trouble picturing out how this game plays, just think Gunstar Heroes or Metal Slug. The game can be played by one player or two players in simultaneous co-op action. In single player, you have the option to play as either Batman or Robin. Both heroes play exactly the same, and have the same exact stages, so the choice is purely aesthetic. 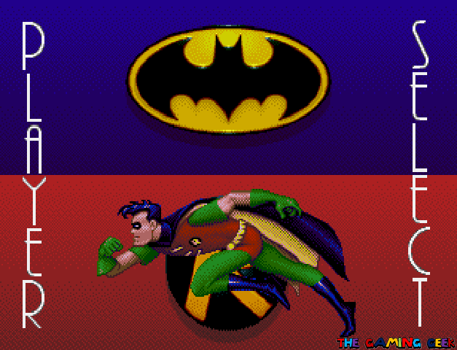 I played as Robin in my first playthrough, then Batman in my second.

You’ve got a health meter in this game, as well as a number of lives. The game has plenty of health power ups and a handful of extra lives throughout its stages. You start the game with just three lives, and when you run out, you’ll have to use a continue. In terms of options, you can only choose how many continues you’ll have, up to a maximum of six.

The game doesn’t have a save or password system, so you’ll have to beat it in one go. And this is the best time to talk about the game’s difficulty. Your two starting lives is definitely not enough to beat this game, especially since you can lose one of them as early as the first boss fight. Ideally, the developers should have programmed different difficulty options to make this more accessible. But at the minimum, they could have given options for the player to choose how many lives to start their game with. In my playthroughs, I used a Game Genie code that gave me ten lives at the start, and even those weren’t enough.

You can do the moves and actions that you can expect from platformers in The Adventures of Batman & Robin. Movement is controlled via the D-Pad, and you have the ability to crouch in this game as well. You can grab unto some ledges, and pass through some ledges as well. 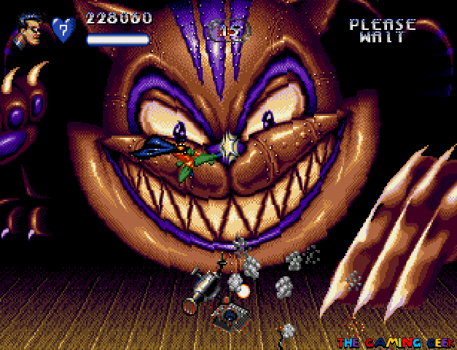 Double jumps can be used to attack or dodge enemies.

You can jump and you have the ability to do a double jump. Double jumping in this game is very powerful, because you can do it at any point of your jump and it comes out with a kick as well. Holding down while performing a double jump tilts your kick downward. 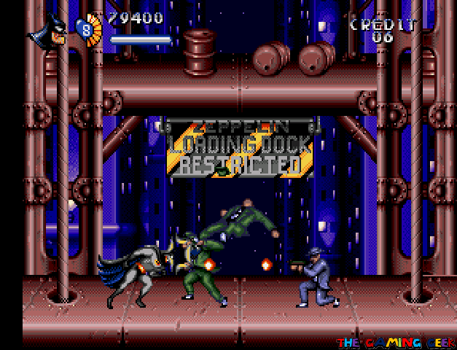 You attack up close via headbutts, punches, or kicks.

Attacking automatically shifts between melee and ranged. If an enemy is up close, you’ll automatically perform a melee attack. Melee attacks have different animations; sometimes you’ll do a headbutt, a punch, or a kick. These all work the same way though. However, having different melee attack animations does help make the game feel less repetitive.

In The Adventures of Batman & Robin, you’ll find an assortment of power ups from objects that you can destroy. Extra life power ups have the Batcowl icon. My only complaint about this is there is so few of them in the game. You’ll die often because of this game’s difficulty, and more extra lives would have offset that. 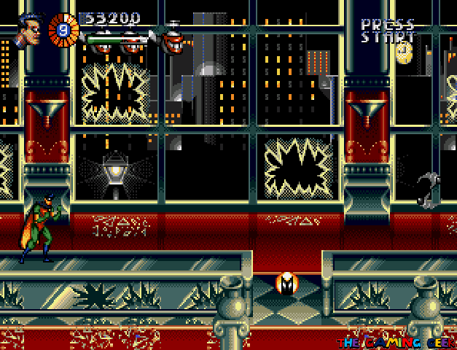 You’ll need every single one of these that you can find – and more.

Health refills come in the form of blue hearts. Sometimes, you’ll find big hearts that will refill a good chunk of your health. These will settle on the floor, waiting for you to pick them up. There are also small hearts which can also come from defeated enemies. These will usually come in bunches of five. One of these will fill up one bar of health. 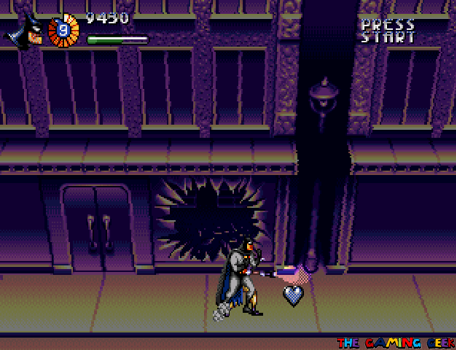 These will refill your health meter.

The problem with these smaller hearts is they will immediately fly upwards in a  “U” shaped pattern, and the hitbox to pick them up is very small. I’m only able to get one or two whenever these appear. Having these small hearts fly up adds to the game’s unreasonable difficulty. I don’t understand why the developers didn’t just make them drop to the floor, like all the other power ups. 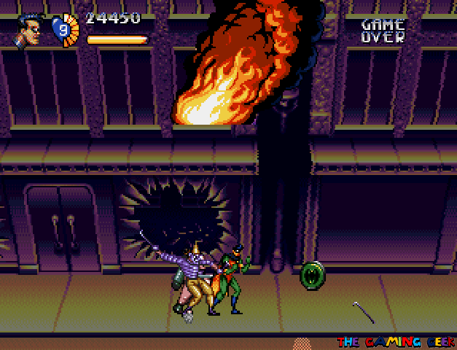 These power ups will alter your gameplay significantly.

The skull power up is pretty simple – it kills all the enemies onscreen. Another power up fills up your attack meter immediately, which we’ll talk about in the next section. The final power up is a weapons upgrade power up. It’ll change and upgrade your weapons based on it’s color: blue for shuriken, green for bolas, and red for Batarangs. Some of these will spin around and change color, while others are fixed to a certain color. 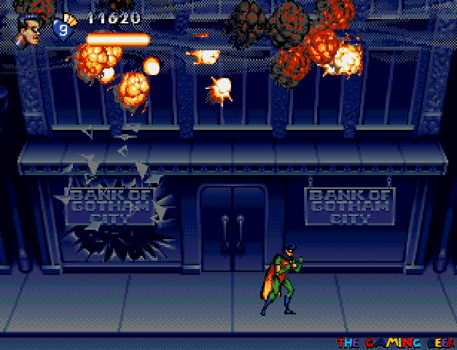 Of the three weapons, shuriken are the weakest but the attack meter charges at the fastest rate with them. You start with one but upgrades will let you throw more. On the second upgrade you’ll throw two, and on the fourth you’ll throw three, which works as a spread projectile. 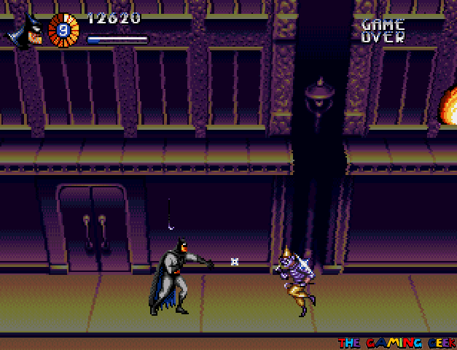 The strongest weapon based on raw damage are the bolas. However, upgrades won’t increase the number of bolas per throw, so this won’t serve as a spread shot. This weapon is really good against bosses. 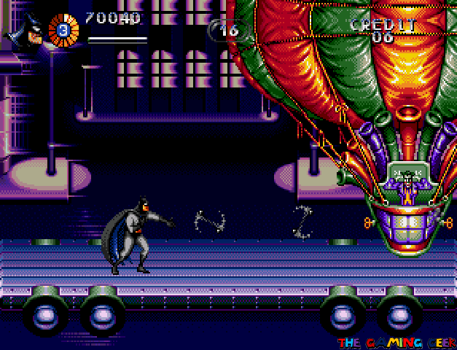 Bolas are the strongest of the three weapons. 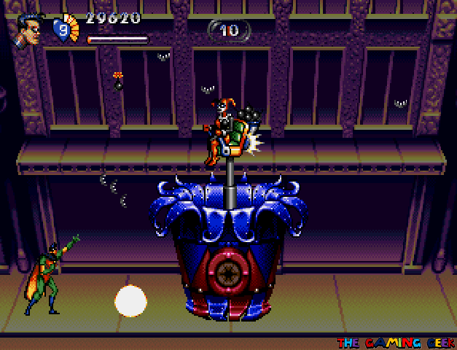 The only problem with Batarangs is the erratic upgrade pattern. The first two upgrades will give you an additional Batarang, but the third upgrade will revert you to a single, larger Batarang. You won’t have to worry about this once you’ve fully upgraded it. 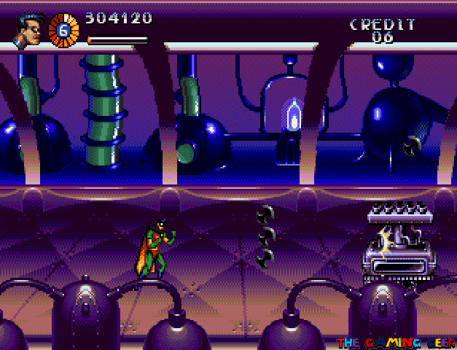 The only way to swap weapons is through the weapon power up. Picking one up when it’s the wrong color can be devastating, so don’t blindly collect them.

While most of the stages of The Adventures of Batman & Robin play out like platformers, there are a few that work a bit differently. There’s a Batwing stage that plays like a horizontal scrolling shooter, so your shots fire directly forward. Aside from the side-scrolling mechanics, everything works the same way here. Including a stage like this was a great idea. My only complaint is, this stage lasts a little too long for my taste. I think the developers should have inserted several smaller Batwing stages instead of this one long stage. 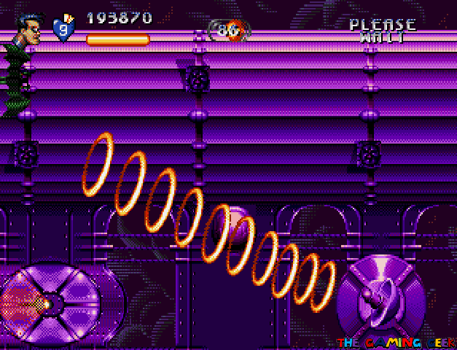 The Batwing stage felt like it went for hours and hours.

There are two sub-stages that also scroll forward automatically, but your hero is wearing a jetpack. You can aim in all eight directions too. The only problem with these sections is that your movement and aim is controlled by the same D-pad. For example, if you’re trying to avoid an enemy by pressing Down on the D-pad, you’ll automatically aim your shots downward too. 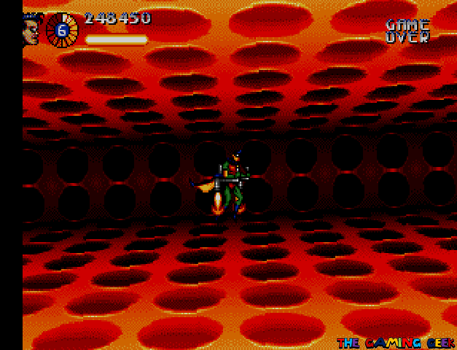 These side scrolling jetpack stages are much shorter than the Batwing stage.

Finally, the boss battle with the Mad Hatter is worth mentioning because of how it plays out. Instead of scrolling to the side, the background moves forward towards you. So you get the feel of travelling into the background, instead of to the left or right. You’ll need to dodge obstacles in the background right before they hit you. 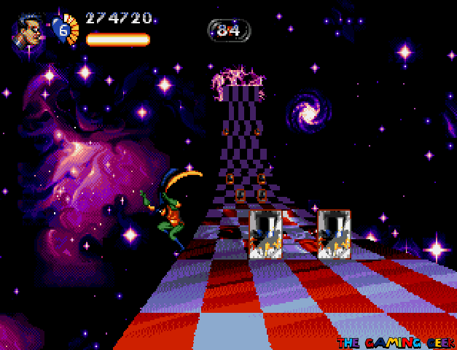 This is one of the toughest sections of the game.

This section plays like a traditional racing game like Outrun, except you can’t control how fast you go forward. Visually, this section is impressive. But it’s a pain in the neck to get through, since you’re worried about objects in the background and foreground all the time.

The Adventures of Batman & Robin is quite impressive visually, but in terms of details that you might not notice if you aren’t paying attention. The obvious graphical elements are really good, such as the sprite work which are quite detailed and are  animated decently. This video on the Coding Secrets Youtube channel will go through all the secrets that went into the background effects in much better detail than I can, so check that out. 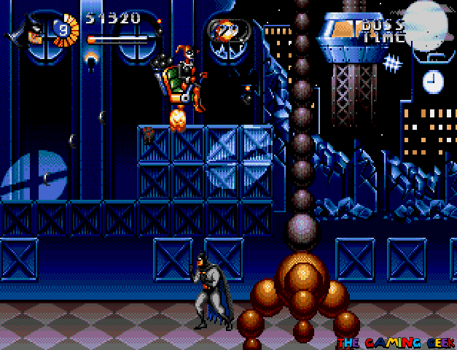 As you’re fighting Harley, this massive claw swings back and forth into and out of the foreground.

As for sound, this game has excellent stage music and decent sound effects. When the game starts, you’re greeted by an an excellent opening theme that effectively tells you about the game’s fast pace. Normally, I’d complain about developers not using music from an established property, but this game’s music is good enough that I didn’t need to hear any themes from the Batman: The Animated series cartoons. If I had a complaint, it would be around how the tracks can be a bit repetitive. But personally, I didn’t mind it because the tracks were really good. 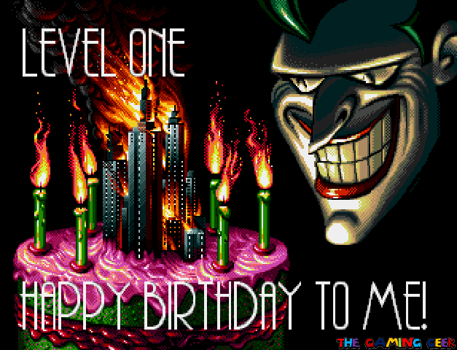 Each stage begins with an image that makes it feel like the start of an episode of Batman: The Animated Series.

In terms of presentation, this game does okay. You’ll see a lot of Batman-themed images scattered along the game, including headshots in the HUD. There’s also an opening scene with really good artwork when you start the game, and each stage is prefaced with illustrations that really capture the mood of the animated series. My one nitpick is the absence of dialogue or text. You wouldn’t know that Mr. Freeze caused the breakout unless you put together the clues in the opening scene, read the game’s manual, or make it to the final stage.

The biggest problem that you’ll have with The Adventures of Batman & Robin for the Sega Genesis is it’s difficulty. Beating this game without cheats will require investing a lot of time playing it, memorizing its stages, and becoming really good with it. So it’s not accessible to anyone who just wants to enjoy playing a video game. I don’t know about other people, but playing extremely difficult games isn’t fun for me.

If you play this via emulation like I did, or if you have a Game Genie for the Sega Genesis, then some cheat codes will help make this game more playable. I recommend trying out the code for extra lives, and the code that disables your weapon upgrades from resetting when you die.

If you don’t have issues with failing to beat a game, or if you have access to cheats, this game is definitely worth checking out. It’s got some of the best graphics and music that you’ll find in a Sega Genesis game. And despite some issues with the game design that makes the game very difficult, the general game mechanics are solid and fun. I didn’t think that Batman would work as a run and gun game, but it did here.