I’ve always believed that it’s hard to write stories about Superman, let alone design a video game around him. He’s supposed to be invincible, and his vast array of superpowers would make it easy for him to deal with any threat. Meanwhile, video games revolve around challenging the player’s skill. So how are you going to design a challenge for a character that is easily able to overcome most challenges? 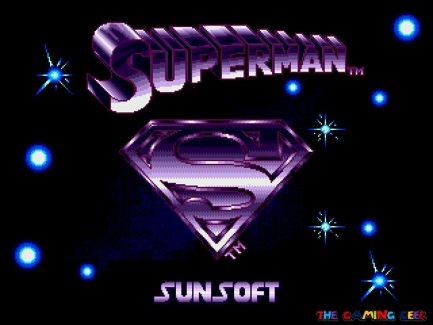 Title screen for Superman on the Sega Genesis/Mega Drive.

When I saw that there was a Superman game developed and published by Sunsoft for the Sega Genesis, I couldn’t wait to give it a try. I liked several of Sunsoft’s Batman games a lot because they were able to capture the feeling of being in Batman’s cowl. Will they be able to do the same for the character of Superman? Let’s find out.

Superman for the Sega Genesis is an action game where you play the role of the titular character. There are five main levels, and the reason why I’m not calling this as a platformer is because the levels play quite differently. The first couple of levels are platforming stages for the most part, where Superman walks along to progress. In these levels, he can jump, run, and crouch, and punch. And very early on, this game’s biggest problem is obvious – it doesn’t feel like you’re controlling Superman.

I don’t know if it’s because of the limitations of the Genesis controller which only has three face buttons and Start. A does a special move, which is a super punch in these early stages. B is for punching, and C is for jumping. Superman can’t fly in these early levels, and doesn’t use his heat vision at all. He can do a weird flying kick by running and then holding the C button as you jump, but this attack is hard to land. His jump also works as an upward punch, which is nice to have but I’d rather have the ability to shoot heat vision beams.

Farther in the game, flying levels are introduced. The first one has Superman flying directly upwards, and his special move in this level is his heat vision. Later on, there are levels with Superman flying forward, and these levels play like side-scrolling shooters (think Gradius). The last levels are primarily platformers but Superman is in hover mode, where he can continue to shoot heat vision blasts or punch.

Each level has a variety of different generic enemies and at the end of each main level is a final boss. So the game is all about combat and action, with some exploration.

The game looks really good for an early/middle era 16-bit title. Sprites are very detailed and well-animated. In particular, Superman looks really good, and even his chest logo is clear. I’m not knowledgeable when it comes to DC Comics characters but even with my limited knowledge, I was able to recognize most of the end level bosses.

The game’s music is also good. There’s enough variety in the level BGMs, some even reminded me of themes from classics like Streets of Rage 2, which is a good fit for the Sega crowd. My only complaint regarding the music is the lack of the classic Superman theme by John Williams. Sunsoft already has the license, I’m not sure why they weren’t able to use it.

I liked seeing these short cutscenes in between levels.

Finally, the game has cutscenes that add to the presentation. In early levels, you get an animation of Clark Kent going into a phone booth to change into Superman, and a Daily Planet newspaper and headline is shown to explain that level’s story. At the end of the level, another Daily Planet newspaper is shown, with a new headline related to how the level ended. The later levels have a plot that involves a famous Superman villain that I won’t spoil. This story is told across the levels, and quick cutscenes help with the transitions.

Aside from having a limited representation of the character, I have other issues with this game too. Everything can hurt Superman, and they hit a little too hard too, as Superman can only endure a few hits before you lose a life. Even if all the energy blasts are colored green (Kryptonite), it’s hard to believe that Superman could be knocked out easily. Health power ups are quite rare, so when playing this game you become careful not to take too much damage. Is that something that Superman would do in the comic books? 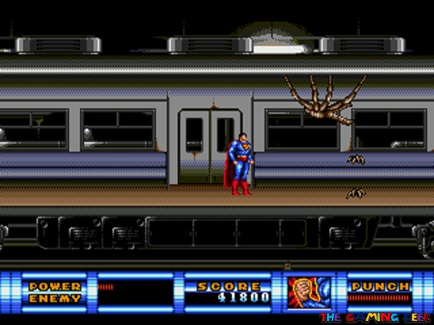 Why can’t I attack these robots using heat vision?

Superman’s jumps are too floaty, which makes sections of the game really difficult. There’s one enemy that sends several small spiders crawling towards you. You can’t hit them since they’re too low even for a crouching punch. Because Superman hangs too long in the air when you jump, if you try to jump over one spider you end up landing on the one after it. In the last stage where Superman is in constant hover mode, it is hard to attack enemies at a lower elevation since they can easily hit his lower body but they have to be at Superman’s eye level for him to be able to shoot them.

This is all made worse by the fact that you only have one life per attempt. You have two continues, and can earn extras for every 40,000 points you get. But using a continue starts you back at the beginning of the level you died in, so it doesn’t really help. Despite being made for a 16-bit console, this game doesn’t have a save or password system. Maybe Sunsoft thought you wouldn’t need it because there are only five main levels?

I have a few ideas that could work with the limitations of the Genesis controller. Pressing the Jump button twice could make Superman hover. While hovering, tapping a direction could make him fly straight in that direction. I’d map his heat vision to A to make it consistent across the levels. I’d use pressing A and B together for his super punch. Finally, I wouldn’t have made his super spin into a gameplay mechanic at all. 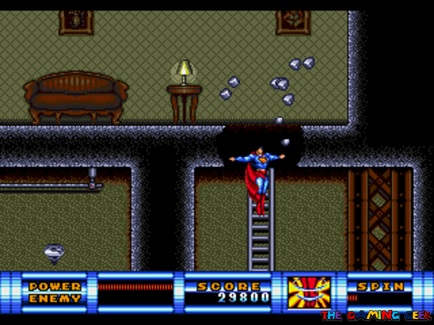 This should’ve been an event and not part of the gameplay.

While the European version offered difficulty options to players, the American version of this game did not have that. Even so, this game is still quite difficult on the default difficulty setting. Simply giving Superman more lives and allowing players to continue at the point they died would have made this game more accessible. Adding an easy level or two at the start would help flatten the difficulty curve of the game, and would probably justify a password system.

I was disappointed in Sunsoft’s attempt at a Superman game. It looks great, sounds great, and has excellent presentation. But it doesn’t feel like you’re playing as Superman. The other game design flaws that I talked about adds frustration to the game experience.

But Superman as a video game is still playable. Hardcore Superman fans might enjoy facing off against some of Superman’s archenemies. The last two levels are enjoyable, as they feel more like how a Superman video game should have been. If you love all things Superman, go ahead and try this game out. If you’re just looking for enjoyable superhero games to play, there are a lot of better options for you.

For more video games based on DC characters, click here. And click here to check out every Sega Genesis video game that I’ve played.