Even if I owned a Sega Genesis back in the day, I never had the chance to play Splatterhouse 2 or 3. It was the type of game that you’d only find on Sega’s consoles, so it was quite unique during it’s time. But I don’t know anyone who owned a copy of this. I also don’t remember seeing this being sold at local stores. Eventually, I developed a taste for scary, horror themed video games so as soon as I saw an excuse to play this game, I did. 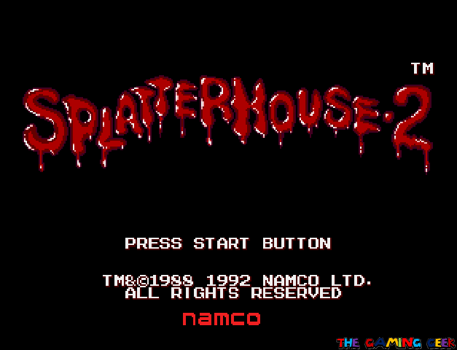 Title screen for Splatterhouse 2 on the Sega Genesis.

This game is a direct continuation of the original Splatterhouse, where the main character Rick failed to save his love interest, Jennifer. The story starts with the Terror Mask communicating with Rick and telling him that there is a way to save Jennifer. Rick dons the Terror Mask once more. 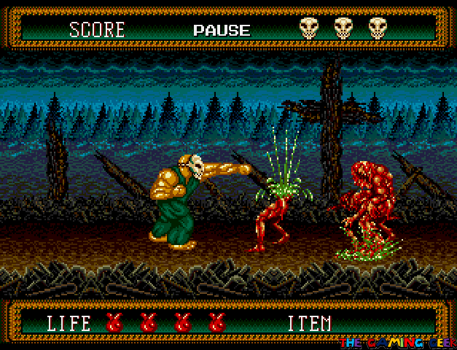 Splatterhouse 2 is all about guts and gore.

You have a health meter (called Life in-game) represented by anatomically-correct looking hearts. You also start the game with three lives. There aren’t any health refills though, so you can only afford to take four hits. At the end of a stage, if you have fewer than three hearts, you start the next stage with three hearts. You have unlimited continues in this game, as well as a password system to help save your progress.

This game is widely considered as a beat ’em up, but it doesn’t feel like one at all. I consider this to be an action platformer instead, since you’re walking over a flat floor instead of a plane and you need to jump over pits.  Instead of emphasizing the fighting, this game centers on level memorization. With no heart refills, the only way to progress is to react to threats accordingly.

In Splatterhouse 2, you can walk to the left or right, jump up and forwards, and crouch. In terms of attacks, you’re actually quite limited. You’ve got a standing punch, a crouching kick, and a jump kick. There’s a special slide kick move that you can also do, but it’s quite tricky to execute. I didn’t even get a screen grab because I didn’t know how to do it on my first playthrough. 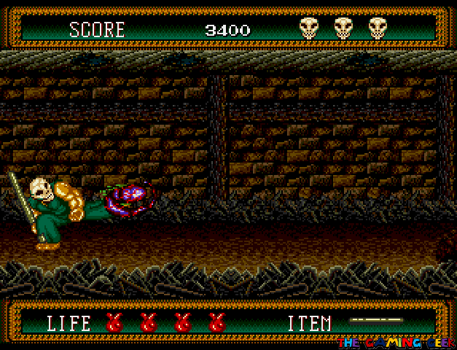 You need to use your crouching kick to deal with crawling enemies.

To do the slide kick, you need to jump forward and reach a certain height. You then have to press down and forward and attack the moment you hit the ground. While the game isn’t requiring precision timing, you will whiff on this move occasionally. The slide also goes farther than what I’m used to. This game has quite a few ground hazards like protruding spikes so you’ll need to be mindful when using this ability. 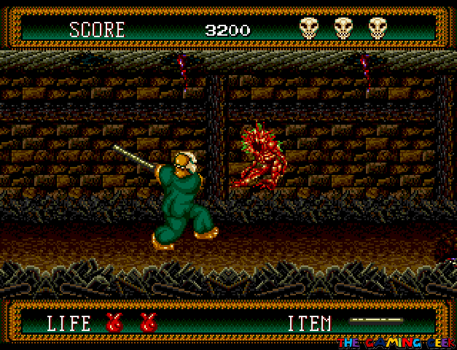 Whacking away at monsters with the steel pipe.

You do get the chance to use different weapons. There are several of them: a steel pipe, a large bone, a chainsaw, a shotgun, and even some chemical beakers. You use them differently, but they didn’t leave enough of an impression on me because each weapon only appears once in the game and only in specific areas. They’re like one and done mechanics that were added as an afterthought. 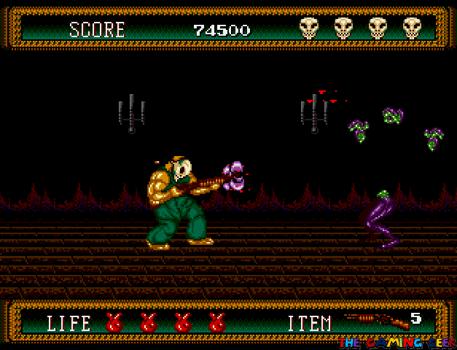 The shotgun’s limited shells are more than enough for as long as you don’t miss any of your shots.

And there really all there is to the fighting mechanics of this game. It feels like the stages were meant to be played in a specific way. If you don’t play it that way, you won’t make it far.

Splatterhouse 2 definitely didn’t disappoint when it comes to the monsters that you have to fight as end level bosses. Despite the limited fighting mechanics, I enjoyed the boss battles quite a lot. It was fun to identify their attack and movement patterns and figure out how to deal with them. 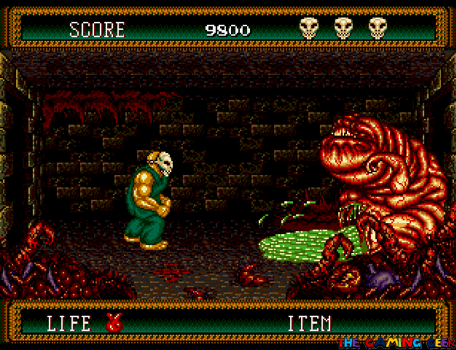 The boss of the first stage.

The stage one boss has basic attack patterns, which didn’t impress me at first. But then I learned that it’s got a final counterattack upon death – it’s stomach ruptures open, and toxic slime will pour out. This can damage you if you’re standing too close. 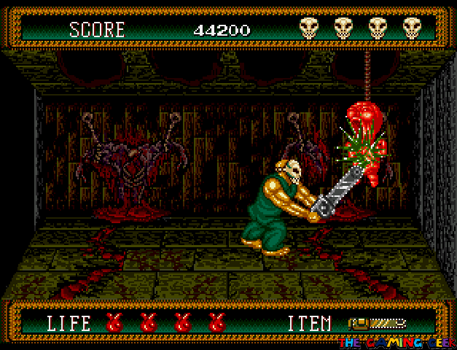 You’ll fight what look like dead baby quadruplets at the end of another stage.

Another memorable boss encounter involves fighting what look like giant baby corpses. You get the chance to use a chainsaw in this fight. I don’t know why but it felt very fulfilling to use the chainsaw on these evil kiddies. I don’t want to spoil any more of the boss encounters so I’ll stop here.

There is a point wherein the memorization required by Splatterhouse 2 becomes really demanding. It’ll start on the fifth stage where you’ll enter the new “Splatterhouse”. What makes this stage challenging is the length of the entire stage. You first need to walk through the first floor of the house. This section is still reasonably easy. 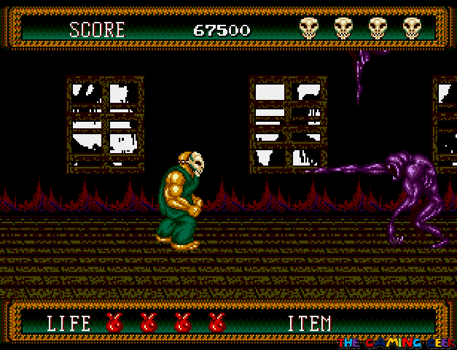 Inside the second house.

What follows next is a section with lots of bookcases, which won’t give you a lot of trouble. The third section is where it starts getting challenging. There are a bunch of containment units and some of them will explode and release monsters as you walk through the area. These units are predetermined and fixed, and it’s still easy enough to remember their patterns. 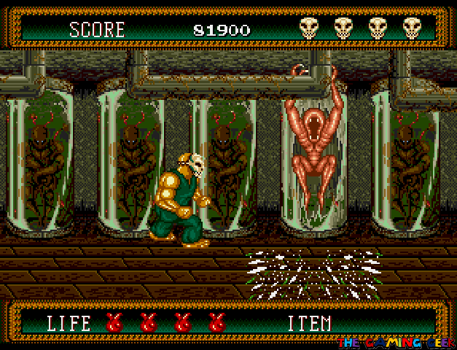 Monsters can burst out of these containment units in the background.

The fourth section is where I really had trouble. This section involves slime-like creatures that move around and toss toxic goo at you. The section itself isn’t a big deal, but by the time you get to this section, you’ve already had to pass memorization tests of the previous three sections. And this isn’t the final section. 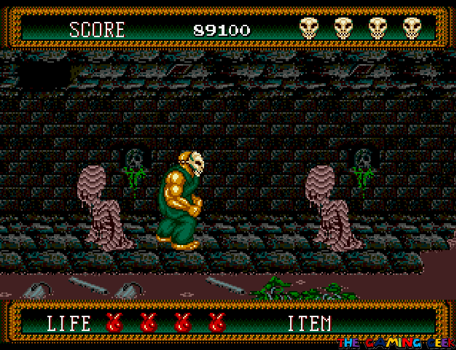 You’ll need to deal with these creatures in the fourth section of Stage 5.

The final section has more of these threats that you’ll need to remember. Thankfully, this stage doesn’t have a real boss encounter. But there’s so much that you need to memorize. If you’re playing this game via emulation, you can use save states to help. But if you’re playing using the actual game and hardware, you may need to start taking down notes. The succeeding stages aren’t be as long, but their challenges are also hard to memorize, so a pencil and some paper will be quite handy.

In terms of graphics, Splatterhouse 2 was okay for me but it had opportunities. Sprites look great, but they need more animation frames. The way they move and act feels so choppy, almost like I’m watching stop motion animation. They’re quite detailed though, and so are the stages. My usual complaint about sections not really changing backgrounds as you move forward, so it doesn’t feel like you’re really moving. Thankfully, it didn’t feel as bad because the sections weren’t long enough to drive the repetitiveness home. 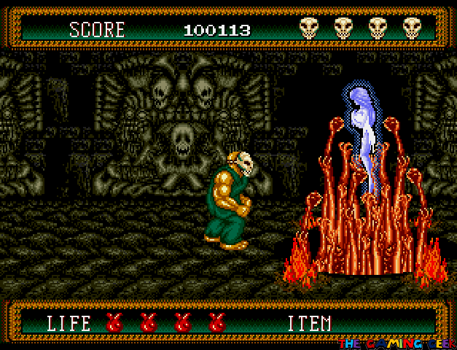 You’re fighting to save Jennifer’s soul.

I loved this game’s music. Themes are apt to the horror theme and really help build the game’s atmosphere. I’d say this and the game’s presentation are the highlights because the developers really embraced Sega’s leniency. 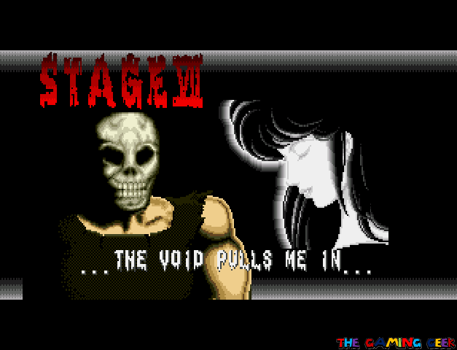 You’ll see a cool intro scene before the start of each stage.

The aesthetic choices all fit the horror theme, from the fonts, the stages, and even the monster designs. Man, the bosses really look terrifying in this game. I’d bet the kids of this era really enjoyed this game simply because of the presentation.

The Splatterhouse franchise was really famous back in the day and after playing Splatterhouse 2, I’d say the reputation was earned because of the novelty of being one of the few games who tried the horror game aspect. I tried to look for scary games to play for the month of October and I was surprised at how limited the options were.

Initially, I was disappointed in this game. I was underwhelmed with the limited moves and poor sprite animation that the game had to offer. And the novelty of being a horror game was lost to me because we have a lot of them to play now. When I realized that this game really plays on the challenge of level memorization, I learned to appreciate it more.

But level memorization was mainly used in traditional game design. So I don’t know if people will enjoy this game if they played it today. If you’re looking for classic horror games to play, maybe you should check out Splatterhouse 3 instead. I definitely wish that I did.

Click here to check out every Sega Genesis video game that I’ve played!