I had the chance to play Spider-Man vs The Kingpin for the Sega Genesis almost two decades ago, and I remember having such a hard time beating that game. Now that I’m revisiting older games, I made sure to try this game again. I’m much better at video games now. That should be enough to beat this game, right? 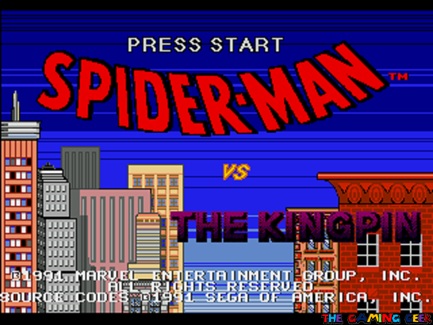 Title screen for Spider-Man vs The Kingpin for the Sega Genesis.

Spider-Man vs the Kingpin is an action platformer developed by Technopop and published by Sega for the Sega Genesis. In this game, you take on the role of Spider-Man. The game starts with the Kingpin announcing that Spider-Man has planted a bomb that will destroy the city in 24 hours via a television broadcast. He also offers a bounty on Spider-Man. As Spidey, you’ll have to defuse the bomb to save the city, as well as find the Kingpin to clear your name.

The first thing I like is how this game incorporates plot details into the gameplay. You truly are given 24 game time hours (a bit faster than real time) to find and defuse the bomb. If you run out of time, it’s game over. The Kingpin’s bounty also explains why policemen are against Spidey, as well as why a lot of bad guys are after him. 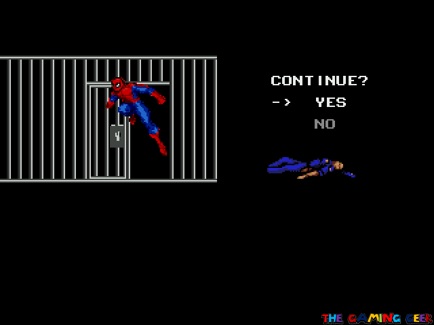 Spider-Man will knock the guard out and escape from jail to continue.

You have a health meter and a web meter, but you won’t have any lives. Whenever you “die”, you go to prison where you are given the option to continue the game or quit. If you do continue, you lose precious hours from your 24 hour time limit. You can get jailed and continue as often as you want, so long as you have time remaining.

Spider-Man can crawl up walls in the background and foreground.

Spider-Man can walk, jump, and crouch. He can even crawl forward (he can’t do this in other games). Attacks are done via a standing punch, crouching kick, or jumping kick. He has his wall crawling ability in this game too. Unlike most Spider-Man games, he can crawl up the side of walls in the foreground and in some background walls too.

Spider-Man has even more abilities, and Spider-Man vs The Kingpin has a good way of implementing this. The A button is dedicated to a special ability. You can choose from four different special abilities in the Pause Menu. His default special move is web slinging, which is indicated by the web symbol. 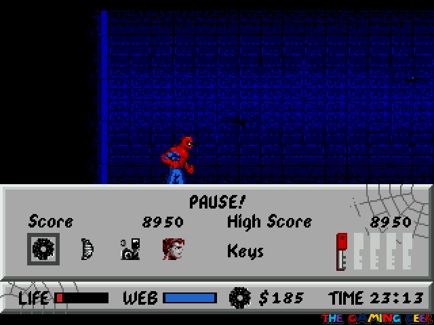 Pausing the game let’s you choose a special action.

Tapping the A button shoots web-balls which can damage enemies. While jumping, holding down the A button shoots a web-line that will allow you to swing. Web-swinging is a little hard to control, but you’ll need to get used to it to get through the final stage (more on this later). Doing this will consume a little of your web meter.

A web-swing can quickly get you past obstacles or get you to hard-to-reach areas.

The other three abilities are situational moves, and every time you use them, the game auto-selects the web-slinging power. The web shield is an important defensive move. You’ll need to press A after selecting this. Spider-Man will create a shield that negates all damage from an attack. However, these shields will disappear after a few hits. You’ll need to go back into the Pause Menu and choose the web-shield again if you need another. 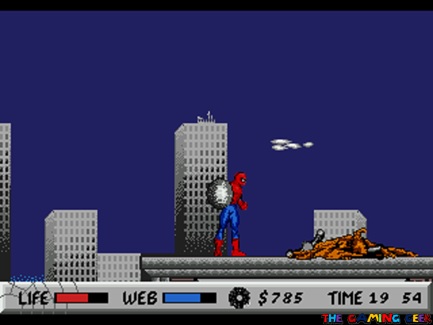 You’ll need to use web-shields in order to defeat this game’s bosses.

Learning how to use web-shields effectively is vital to beating this game. Some enemies, especially bosses, can hit real hard and drain your life meter fast. Blocking attacks with a shield and then counter-attacking is a strategy that you will use often when battling these enemies.

The next ability is Peter Parker’s photography. Yes, you can take photos in this game. At the end of every level, you’ll be able to sell your photos, and the money you earn will refill your web meter. The more infamous the bad guy, the more cash you’ll earn. You can only take a limited number of pictures, indicated by the number in the symbol, so it’s best to save at least two for the bosses. These photos will only capture Spider-Man’s immediate vicinity, so you’ll need to get up close and personal to get great shots.

These photos will help clear Spider-Man’s name and give him cash to spend on more web fluid.

It’s amazing how a game of this generation can incorporate this idea in the gameplay. And it is accurate to the character of Spider-Man, as he does need to take pictures of himself and his enemies frequently. There are power ups in the stages that will fill the web meter, but these don’t show up often. Taking pictures of your enemies will be your primary method of getting more web fluid. 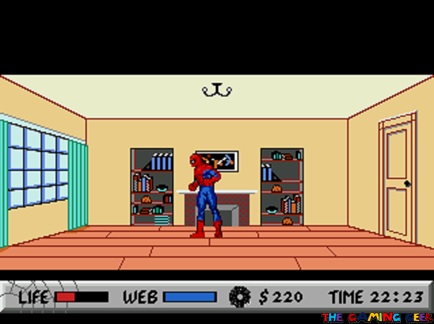 Time flies when Spider-Man is home.

Spider-Man’s final ability is going home to rest, which is indicated by his unmasked face. He doesn’t actually change into civilian clothes though. There isn’t much you can do at home, except rest and regenerate your health. The health bar will get refilled, but time also passes much faster at home.

When you go home, you’ll need to go back to the start of the stage you left. So aside from losing time, you’ll have to replay some sections. All the levels have power ups that refill health, and some will even refill it completely. Knowing where these are will help you strategize on when to go home and when to go on.

On my first replay of Spider-Man vs The Kingpin, I had such a difficult time because of a number of reasons. With the exception of the first, the game’s bosses are hard to defeat until you figure out their weaknesses. I don’t think you can simply win by brute force or sheer skill. And if you managed to do that, you’ll surely have trouble in the final stage as you will face some of these bosses a second time.

Most of the game’s bosses are difficult to beat without knowing their weaknesses.

Part of this is because of the game’s hit detection. Because Spider-Man’s attacks have such a small hitbox, you’ll really need almost perfect timing to land your attacks. Small enemies like rats and bats will give you trouble because it’s so hard to hit them. The developers should have made this a little more forgiving to make combat flow more effectively.

Another reason why this game can be so hard for newcomers involves the Continue mechanic. At the end, you will need to defuse the bomb. The first time you use the keys incorrectly, the timer will start running a lot faster. Make another mistake and it’s an immediate game over. The same thing happens if you run out of time. Failing this part will mean that you’ll have to go through the entire game from the beginning. 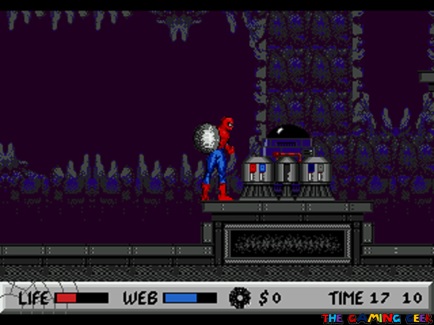 If you make a mistake while attempting to defuse the bomb, it’s game over.

Once the bomb has been defused, you will no longer have to work against a time limit. However, you will still have to battle the Kingpin. And he certainly doesn’t fight fair. While he’s constantly attacking you, you need to worry about Spider-Man’s wife, Mary Jane, who is chained up and hanging from a ceiling. She is slowly being lowered down into a vat of boiling oil.

The final fight with the Kingpin is epic, and difficult.

If Kingpin knocks you out, or if Mary Jane goes into the boiling oil, it’s an immediate game over. You’ll need to start from the beginning. Beating the Kingpin isn’t easy, because his only weak spot is his head, which is outside Spider-Man’s punching reach. Once you figure out the right strategy, this battle is quite manageable. But because you can’t retry immediately if you fail, it becomes hard to learn what the right strategy is.

The graphics of Spider-Man vs The Kingpin is another thing that holds it back. It looks okay, but lacks polish. For a Sega Genesis game, it looks quite outdated. And the art style is a little rough.  The sounds are lackluster too. Some sound effects are out of place, especially the screeching sound that comes from rats. The stage tracks are okay, but they sound out of place. They feel more appropriate to a slower-paced game, something similar to Metroid or Alien 3 that invokes horror or mystery. I would have preferred faster, more action-oriented music for this game.

The game’s graphics are okay, but the Sega Genesis could do so much more.

Where this game shines is in it’s faithfulness to the source material. Spider-Man’s story dialogue does read like how the character thinks. The bosses have powers and abilities that are accurate to their comic book versions. The developers even found a way to use Spider-Man’s spider sense – it goes off right before a tough enemy appears. And Venom doesn’t trigger it. J. Jonah Jameson even makes an appearance. 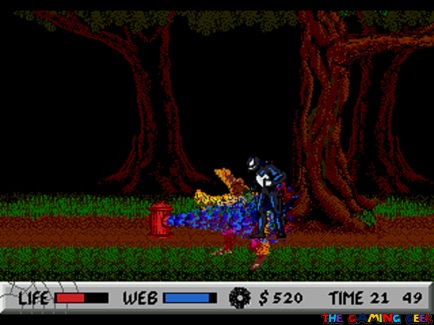 Hint: To beat the Sandman, you’ll have to look for a fire hydrant and blast him away with water.

I think my only complaint, from the perspective of comic accuracy, is they had Doctor Octopus and Venom working for the Kingpin. I wish they used a different villain as a boss of the first stage, and maybe have a scene that shows why Venom is doing the Kingpin’s bidding.

It took two full playthroughs for me to appreciate Spider-Man vs The Kingpin. It’s clunky hit detection made combat less pleasing. People may dismiss this game on their first impression because of the average graphics and sound. And if they haven’t given up by then, they might get turned off once they face the second or third boss battle.

But if you can accept these flaws and have the patience to learn the game’s mechanics and nuances, you’ll find that this game has a lot of really good ideas. How many Spider-Man video games make use of his photography? I now consider Spider-Man vs The Kingpin a hidden gem. If you are able to play Sega Genesis games, I recommend that you try this game out.