I actually had the chance to play Ghostbusters on Sega Genesis back when I was a kid. However, I played the Japanese version so I didn’t have a full understanding of what I needed to do in the game. I was never able to beat it. I’m glad that we’re getting a new Ghostbusters movie, one that actually references the original films. That gave me a good reason to revisit this game. 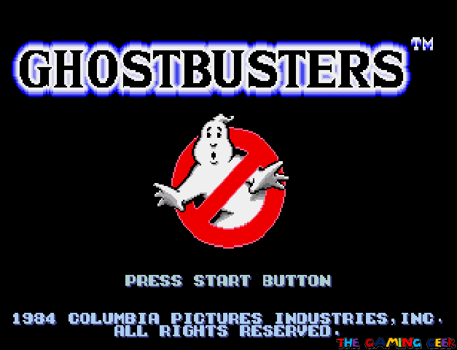 Title screen for Ghostbusters for the Sega Genesis.

Let’s talk about my recent experience with this game.

Ghostbusters is an action platformer that was developed and published by Sega for the Sega Genesis. It’s focused on shooting, so most consider this game as a shoot ’em up. In the game, you can choose to play as three out of the four Ghostbusters: Ray, Egon, or Peter. Winston isn’t in the game, and I think it’s because the three have specific traits. 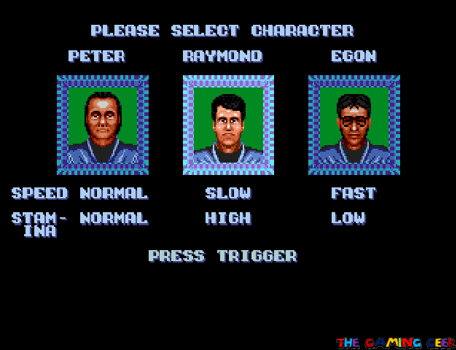 At the start of the game, you have the option to choose from four stages that represent haunted buildings. You can take them on in any order that you wish. When you beat a stage, you’re awarded money that you can spend in Item and Weapon shops. After beating all four stages, a fifth one is unlocked. Beating that unlocks the sixth and final stage. 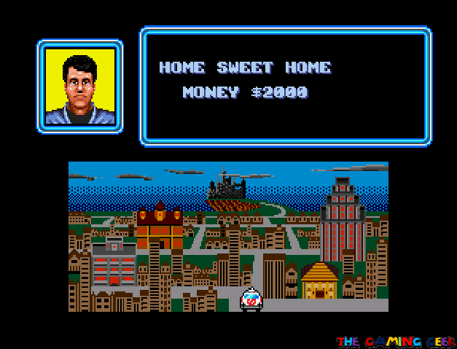 You’ve got a health meter in this game, and you start the game with two lives. Later on, you can purchase special weapons which use up energy. So, you also have an energy meter. You can get health and energy refills by shooting at Slimers scattered across the stages. There are extra life power-ups in the game, but they’re rare.

The game doesn’t have a password or save system. But you do get ten continues, so you’ve got plenty of chances to beat this game. You can also choose to play this game in Easy, Normal, or Hard difficulty. The ending is the same no matter which you choose.

The Ghostbusters can walk to the left and right, and have the ability to jump and crouch. They can climb up and down ladders. They can even swim; some stages have swimming sections. While crouched, they can crawl forward and backward. I meant that literally, and it is significant because you can only fire your weapon forward. If you’re crawling to the right inside a tight space and there’s an enemy to your left, you won’t be able to shoot it. 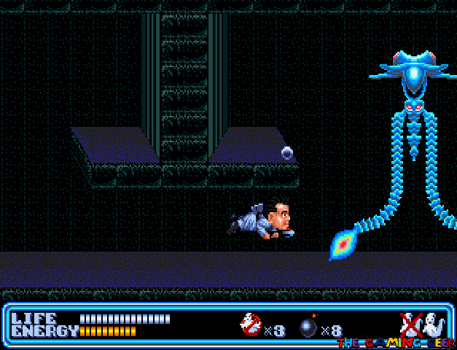 No need to worry about air while swimming!

Each character has their signature Proton Packs, but they don’t work how you expect them to. In this game, their normal shot is a single bullet shot. You can fire these straight forward, upwards, or diagonally up-forward. You can tap the attack button multiple times to shoot multiple shots. 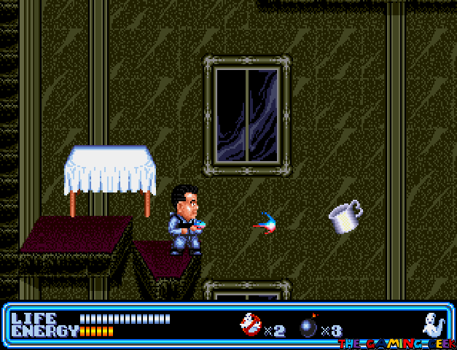 Instead of firing Proton Streams, you fire these.

They only fire Proton Streams after beating a mid-level boss, or some of the later end-level bosses. Once they’re beaten, they turn into these generic green ghosts that frantically fly back and forth. 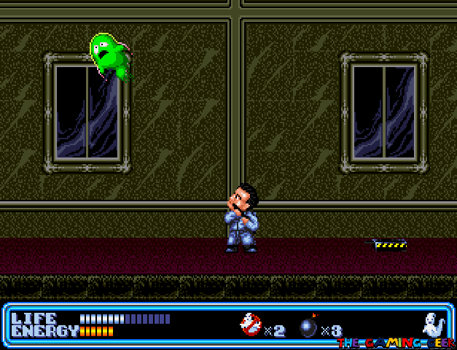 Finally! We can shoot Proton Streams and use ghost traps!

When you catch a ghost in a Proton Stream, it’ll struggle. You have to somehow pull it in the range of your ghost trap. This part can be quite challenging, as the ghost can break free after some time. If you successfully trap a ghost, you’ll get more reward money at the end of the stage.

However, you only have two to three attempts at catching these ghosts. After some time, they’ll escape and you won’t be able to catch them again. You need to do your best to catch as many of these ghosts as possible, because money is important in this game.

One thing that I found unique about Ghostbusters is that you can exit out of a stage at any time, and go back to the headquarters. Any time you’re at the headquarters, you can choose to visit either the Item Shop or the Weapon Shop. In the Item Shop, you can buy four different items. The first item is Gyoza, and it replenishes your health meter. If you’re not currently dealing with a stage or if your health meter is full, you can’t buy this item. 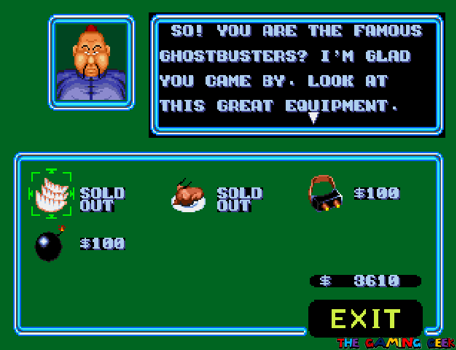 The second item is Peking Duck. This also replenishes your health, but you bring this along with you in the stages. You can only carry one of this. The third item is the Infrared Scope, which will help you see in dark areas. You’ll only need this in one of the stages. It’s effect wears off over time, so it’s best to buy two or three of these. Finally, the Bomb is a screen clear attack. It’s good against bosses or areas with lots of enemies. 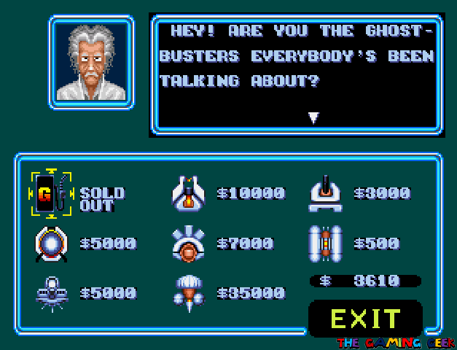 The Weapon Shop is where you can buy upgrades or different weapon types. Unfortunately, I didn’t earn enough money to buy all of the available weapons. Let me talk about the useful ones that I’ve tried starting with the Energy Tank. This upgrade increases the energy meter, and you can buy it several times. There’s the Special Suit that creates a force field around your character that reduces damage, but this slowly eats up your energy meter. 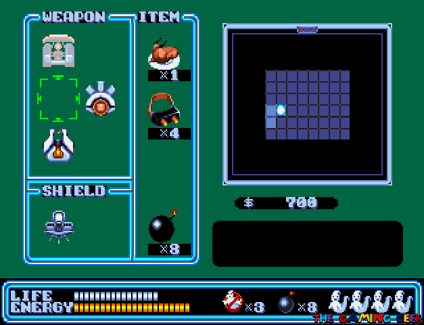 Pausing the game leads to this menu screen.

As for the weapons, the best that I’ve tried is the 3-Way Shot which fires three bullets per shot, and the Explosives, which fires a ball of energy that explodes in eight different directions.

Ghostbusters has good enough graphics, but it’s a little lacking for me. Ghosts are well defined, and the super deformed versions of the playable Ghostbusters work. But the stage backgrounds feel empty and repetitive. I think Sega could have done more with this game. 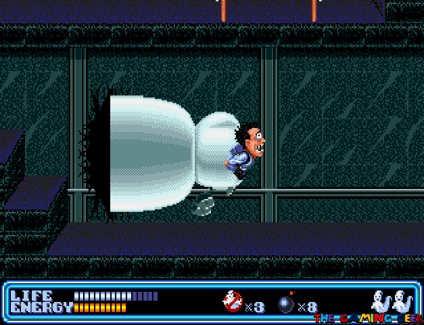 How hard does the Marshmallow Man punch?

As for the sound, this game is pretty decent as well. There’s something off with this game’s version of the Ghostbusters theme, like it’s in the wrong key or a few of the notes are too high or low. And it doesn’t use the theme often enough. I wish they used different versions of it in the menus, at the H.Q., or at the shops. Instead, they used original themes which do their job but aren’t very noteworthy. 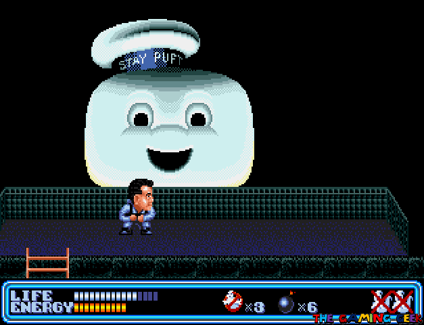 Ray will have to face the Stay Puft Marshmallow Man once again.

In terms of presentation, this game doesn’t do anything wrong. But like in the other areas, they could’ve done more. Maybe some better scenes of them driving the Ecto-1 to the different stages. Or cutscenes with better visuals, instead of just the three Ghostbusters sitting around and talking. Maybe they could’ve put an explicit scene explaining Winston’s absence. So again, missing all these things doesn’t make the game bad, but it could have been a lot better.

As a video game, Ghostbusters for the Sega Genesis is solid. There’s nothing broken about its mechanics, and while it’s a little lackluster, it’s not bad to look at. However, the little things that are missing from this game is making it hard for me to really enjoy it. Winston is missing without any explanation. The Ghostbusters only use their trademark Proton Streams and ghost traps occasionally. They’re getting their new equipment from someone else, instead of inventing these themselves.