Castlevania: Bloodlines, at least from what I’ve observed, is revered among fans of classic Castlevania games. It’s not seen in the same light as Rondo of Blood or Castlevania III: Dracula’s Curse, but it is a game considered worthy of the brand. So I really made sure that I didn’t skip the only Castlevania title that was released on the Sega Genesis. 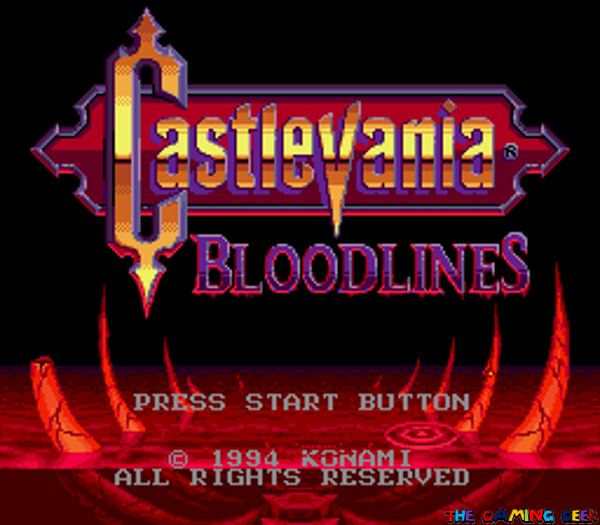 Title screen for Castlevania: Bloodlines on the Sega Genesis.

Let’s talk about my experience with this game today!

Castlevania: Bloodlines (or Castlevania: The New Generation in the U.K.) is an action platformer that was developed and published by Konami for the Sega Genesis. Unlike most Castlevania games released during this time period, Bloodlines features non-Belmont characters as the protagonists. You can choose to play as the whip-wielding John Morris or the spear-wielding Eric Lecarde. 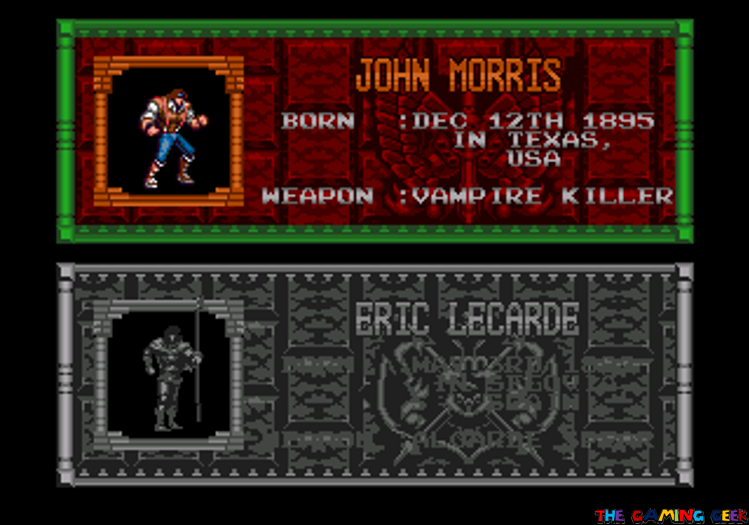 The two protagonists both use long-reaching primary weapons.

Just like in most action platformers and other Castlevania games, this game employs a health meter and a number of lives. You lose a life when your health meter is completely depleted. You can find pieces of meat occasionally, usually hidden in walls that can be destroyed. These will fill up your health meter. 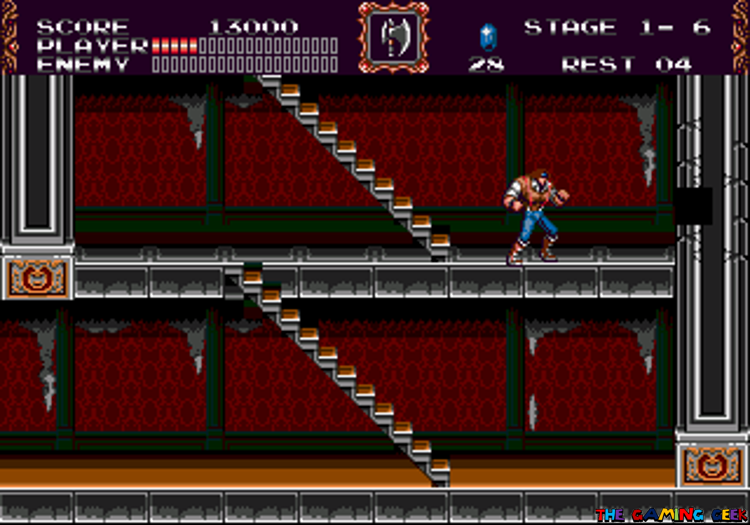 It’s quite easy to spot walls that can be destroyed in this game.

In the game’s Options, you can choose to play with 1 to 5 lives. If you run out of lives, it’s game over, but you do have two continues. You can gain additional lives if your score hits specific thresholds or when you find extra life power ups. This game also has a password system, which will allow you to save your progress. The Options Menu also allows you to choose between Easy or Normal difficulty. I think, if you beat the game on Normal, you’ll be able to unlock Expert difficulty. You can also play the game’s themes, sound effects, and even the attract mode screens here.

The protagonists of Castlevania: Bloodlines share similar moves. They can walk, crouch, and jump. Both can jump onto and off of stairs. Their weapons are both long and can be upgraded up to three times via special power ups. 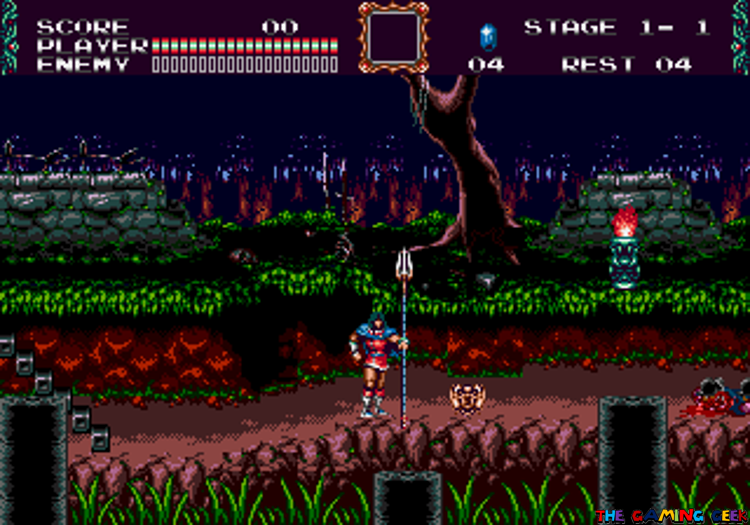 Pick these up to upgrade your primary weapon!

Both also use the most popular Castlevania sub-weapons. Using sub-weapons will use up gems. The Boomerang flies forward and returns after a short distance. This can hit enemies going forward and backward. It is very handy when dealing with enemies right in front of you. 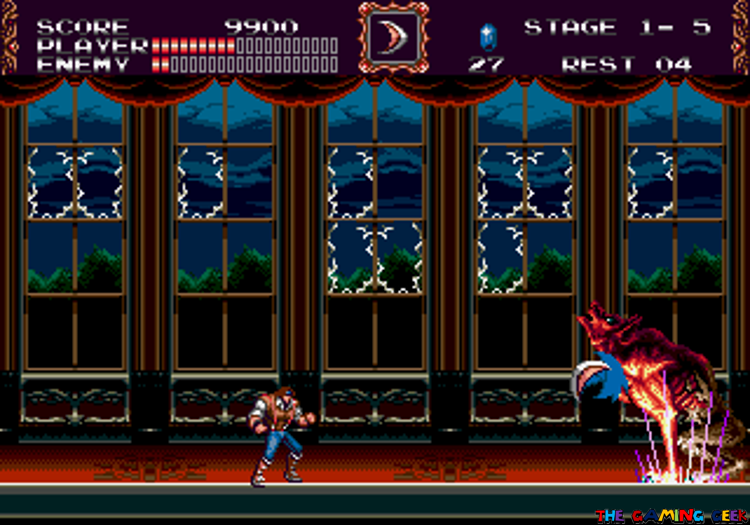 Using the Boomerang against a mid-level boss.

The Holy Water is thrown in an upward arc. Whenever it hits an enemy or the ground, it’ll burst into flames that will move forward a short distance. I seldom used this because it didn’t feel quite effective in this game. 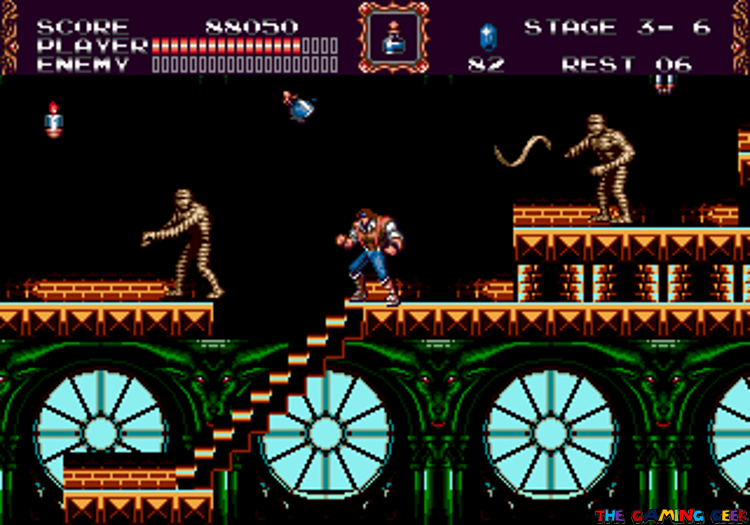 I didn’t find good use for the Holy Water sub-weapon.

The best weapon by far is the Axe. It is thrown upwards like the Holy Water, but reaches higher and deals more damage. It is especially useful when you play as John, who can’t attack upwards. You’ll be dealing with a lot of giant or flying enemies, so the Axe becomes vital. 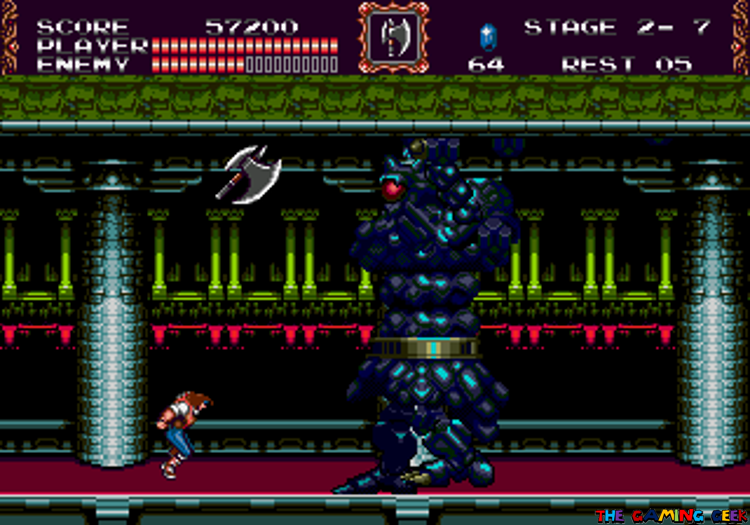 The Axe is quite effective against a number of bosses.

New to this game is each sub-weapon’s secondary attack. To be honest, I didn’t get the chance to see the Holy Water’s secondary, and I forgot how the Boomerang’s secondary attack worked. But with the Axe, you throw three of them forward. They’re a little spread out, so you’ve got a large margin for error. This addresses the one weakness of the Axe: the lack of forward reach. Secondary attacks cost more gems, but they’re worth it in this instance.

I wish I could say that both protagonists of Castlevania: Bloodlines were made equal. But John Morris got shortchanged in this game! His Vampire Killer works in the same classic way – you whip it backwards then forwards. So there’s a delay on when the hitbox actually goes in front of him. You do get the benefit of it hitting enemies behind you. 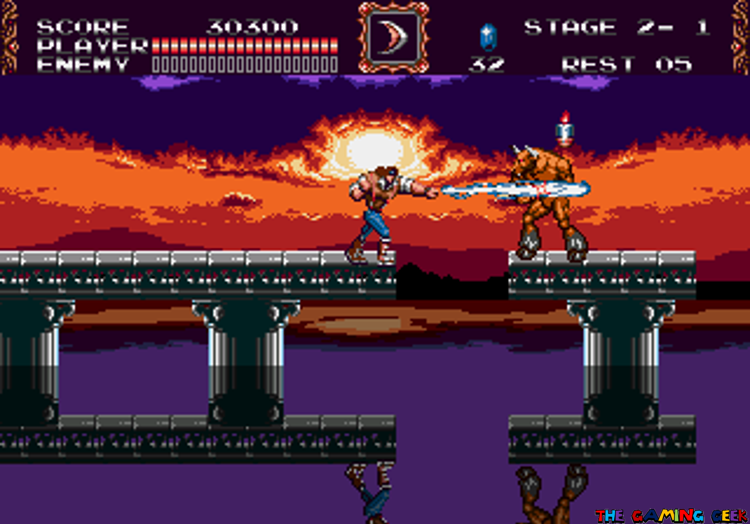 He also has the ability to whip diagonally upwards – but only when jumping. You can use this to attach to a ceiling and swing forward. It is absolutely necessary when faced with a large gap that you can’t just jump across. 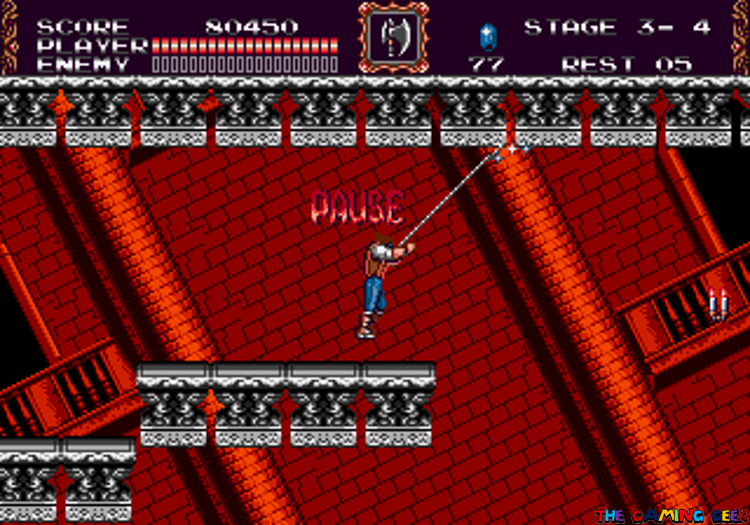 I couldn’t pull off the whip swing consistently.

Eric has way more helpful abilities. He thrusts his spear forward instead of in a whipping motion. You lose the hitbox behind you, but the spear comes out much faster than the whip. What’s really important is Eric’s ability to stab upwards. He can do this straight up or diagonally. This makes him less dependent on Axes and gives him a major advantage against several bosses. 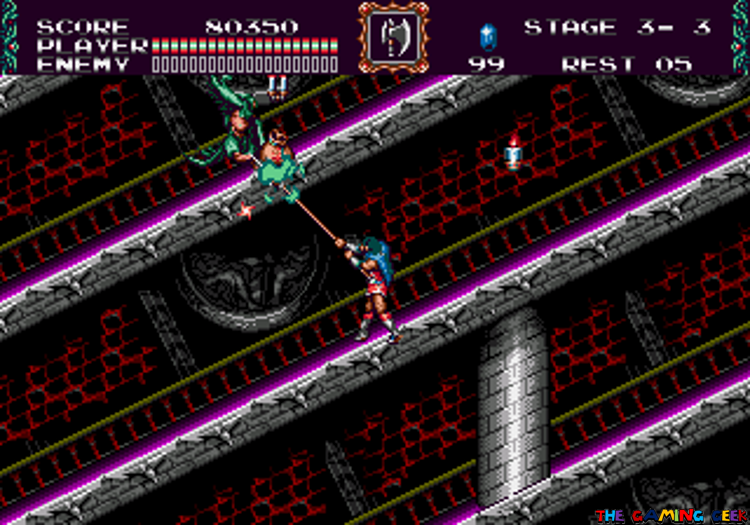 He’s also got a high jump move that lets him reach high areas that John won’t be able to get to, and a spear-twirl that is hard to master but very useful if you can get the timing right. Eric’s got all these abilities without any clear drawbacks! 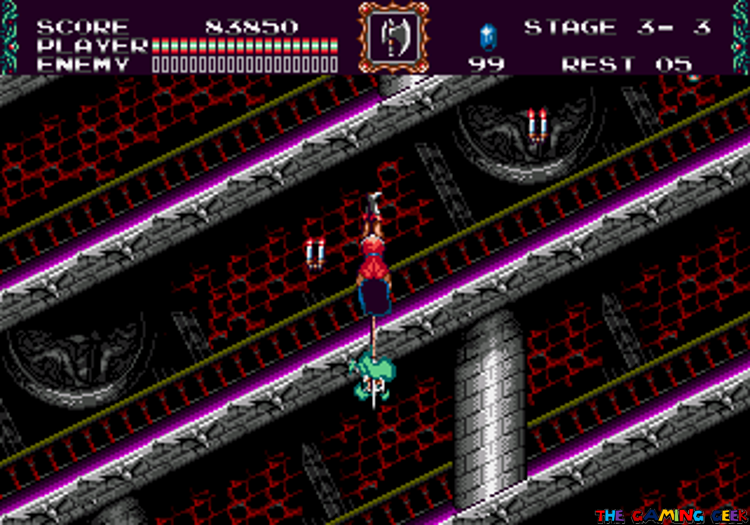 Going into this game, I really wanted to stick with John because he moves like the Belmonts. But Eric is just a lot more capable and fun to play. They’re definitely not balanced. I’d say this is another method of changing the difficulty of the game – Eric is Easy mode and John is Hard mode.

Another aspect of Castlevania games that I look forward to are the boss battles. Even though they’re not always based on actual characters, I’m usually familiar with them because I like the supernatural horror genre. And Castlevania: Bloodlines did not disappoint. 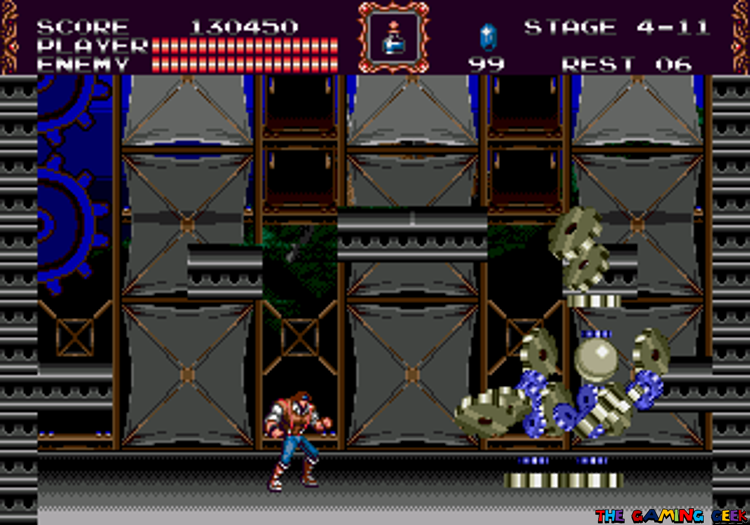 Battling a golem made up of metal gears.

You’ll face the usual Castlevania mainstays like the hell hound and Frankenstein’s monster. The more modern setting of Bloodlines also allowed for enemies like the animated steel gear monster and the two “faces”. 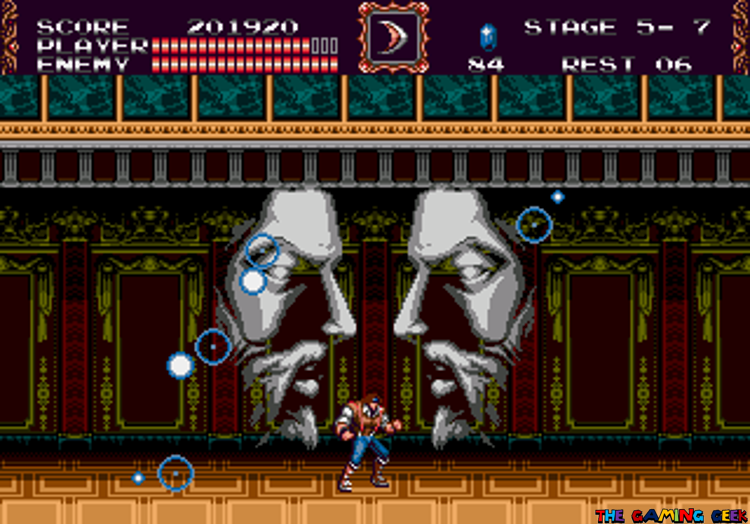 This mid-boss is definitely unique.

The final stage bosses are well-designed too. They’ve got multiple attacks and phases to them. Death’s mechanic was pretty cool – he has these spinning cards that you’d have to hit. Depending on the card you struck, you’d get a rematch with bosses that you’ve beaten before. So you can actually control what order you fight them in. 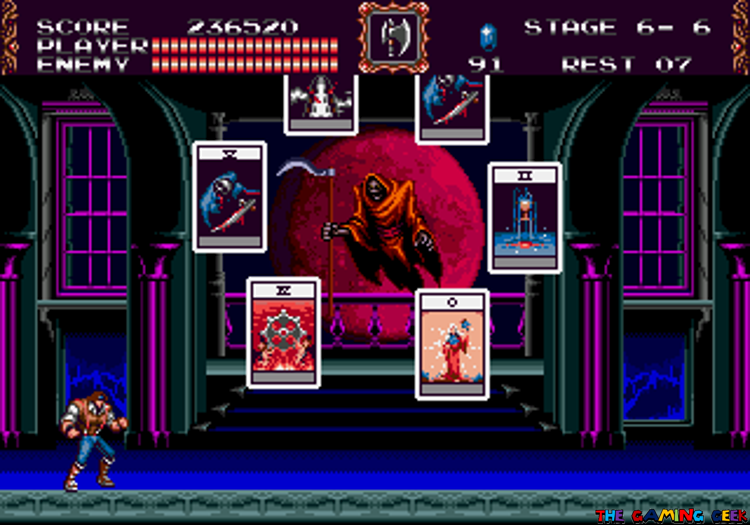 Death’s cards were an interesting twist in this battle.

Now that I think about it, the battle with Dracula himself was a little underwhelming for someone who has played several Castlevania games in quick succession. And not because the battle itself is bad; I’ve just fought Dracula several times already, in different games. 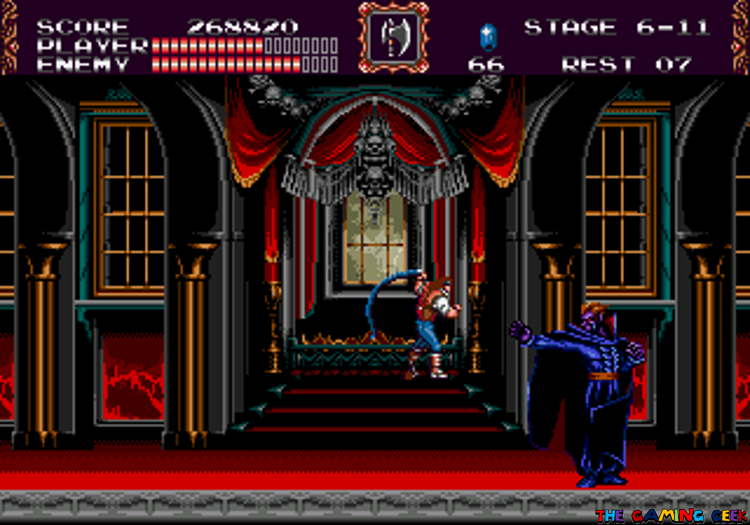 Face to face with the Lord of Darkness: Dracula.

Both my playthroughs were on Normal Mode, so I’m not sure if the game will throw curveballs in Expert Mode. The final battle itself is quite easy, compared to other Castlevania games. But I think I’ll take this one over some of the frustratingly difficult final bouts in the others.

On one hand, I was really able to feel the difference between Castlevania: Bloodlines and the ones released on the Super Nintendo. The cool scrolling effects, with backgrounds moving separately from the foreground, are gone. But that’s a limitation of the console, so I can’t hold it against Konami. They did a pretty good job of pushing the Sega Genesis hardware, with great-looking stages. Sprites are really good looking as well, with both John and Eric getting well-animated sprites. Enemies are pretty clearly defined and there’s a lot of different kinds. 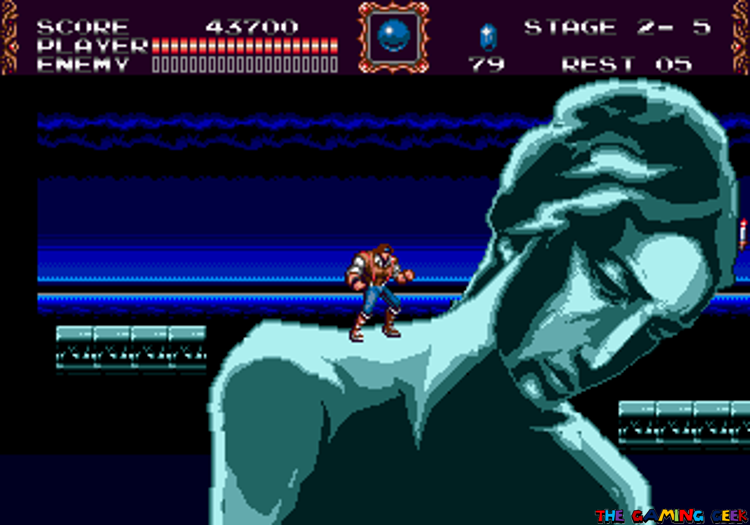 Konami took advantage of this game being set in the 1890s.

The game’s music is definitely not a downgrade. I loved hearing Genesis versions of classic tunes like Bloody Tears and Vampire Killer, and the new tracks were really good too. As I’m writing this, I’m hearing the theme that plays on the password screen in my mind. This game’s music alone is worth the price of admission. I’m glad Konami put in a BGM and sound effect player in the Options Menu. 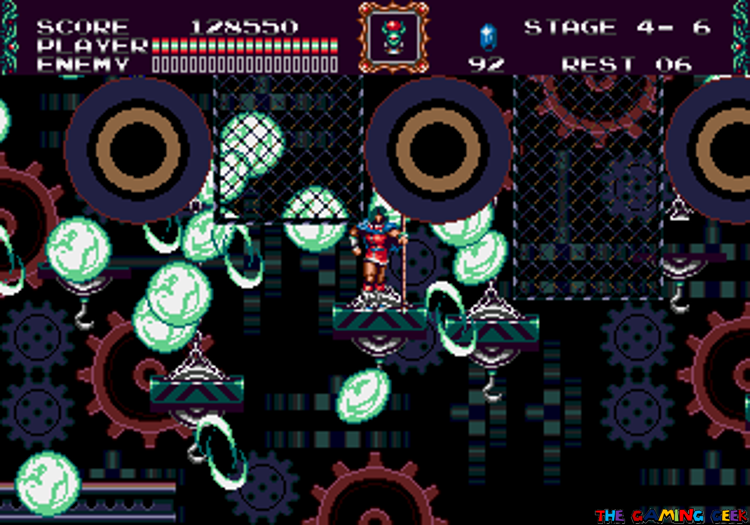 As for presentation, this game delivers what’s expected. There’s a quick intro that explains the plot of the game, a map that appears before every stage showing which part of the world you’re in. The HUD is pretty clean and straightforward, with an artstyle that suits the brand. All well-polished, as can be expected from Konami.

Castlevania: Bloodlines is a solid game that get’s overshadowed by titles like Super Castlevania IV and Rondo of Blood. But it’s a pretty good game that manages to feel different enough from what you can play on Nintendo consoles. It doesn’t offer a lot of innovation, but we shouldn’t expect all video games to do that.

Thanks to the password system and the inclusion of Eric Lecarde, this game’s manageable difficulty actually made it more fun to play. I highly recommend this title for anyone hungry for classic Castlevania action. I’m really glad that I didn’t skip this one.