I can still remember playing the Captain America and the Avengers arcade game in various malls when I was a kid decades ago. Kids that time were either playing this, or Konami’s arcade games based on the X-Men and the Simpsons. And I remember having a good time with this game, even though it was quite simple. So I made sure that I was able to revisit at least one of the two home console ports of the game. Today, let’s talk about the Sega Genesis version of Captain America and the Avengers. 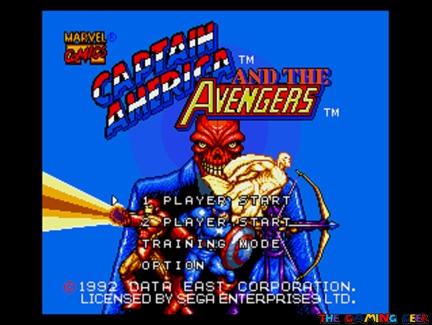 Title screen for Captain America and the Avengers on the Sega Genesis.

Captain America and the Avengers is a beat ’em up game developed and published by Data East. Unlike the NES game of the same title, this is a port of the popular arcade game. The game can be played by one or two players. Each player can choose to play as Captain America, Iron Man, Hawkeye, and Vision.

The four playable Avengers members in this game.

In the game’s Options menu, you can choose either Easy, Normal, or Hard difficulty. You can also choose to have three, five, or seven continues. Each player actually has only one life. Once you run out of energy, you’ll need to use up a continue. There’s a sound test feature that will let you play all of the game’s music and sound effects. Finally, you can change the button configuration here as well. You only need two buttons in this game: one for a punching attack and one to jump. You can assign these to any of the original three buttons of the Genesis controllers.

The shoot ’em up stages in this game involve both flying and underwater sequences.

From here on out, the game is pretty straightforward. You go through five different levels, each split into sublevels. Like most beat ’em up games, levels use a flat plane, and you can’t move backwards. There is no platforming in this game, although you may need to change elevations sometimes. Also, there are auto-scroll flying sections that function more as shoot ’em up stages. These are quick and there are only a few of them, but they help in adding variety to this game.

Whichever hero you choose, their controls are the same and most of their moves are similar. Pressing both the attack and jump buttons will cause your hero to shoot a projectile, which can be done on the ground or while jumping. This is where Captain America plays a little differently than the others. Iron Man shoots a repulsor blast, Hawkeye shoots an arrow, and Vision shoots a laser beam from his forehead gem. Their shots can only hit individual enemies. However, Captain America throws his shield when you do this, which passes through enemies and hits them on the way back as well. The drawback is, he can’t move until he gets his shield back, so he becomes vulnerable to attacks.

All four Avengers members have projectile attacks on the ground and in the air.

Another difference between the heroes involve jumping attacks. When you press the attack button before reaching less than half the maximum jump height, all four heroes do a dropping attack. Beyond the midpoint of the jump, Cap and Hawkeye do a flying kick. Meanwhile, Iron Man and Vision shoot their projectiles downward. Each move has it’s own advantages and disadvantages. The best choice will depend on your preferred playstyle.

Flying kicks and beams shot downward have their own advantages and disadvantages.

Finally, holding the attack button does a defensive move. Cap blocks with his shield, Iron Man uses an energy shield, and Hawkeye blocks with his bow. Meanwhile, Vision turns intangible. These defensive moves only work against enemy projectiles and Vision’s move works even when he is attacked from behind.

While all four heroes play similarly, it feels like Captain America and Vision are better. Captain America’s shield helped me a lot in controlling enemy crowds (you can be fighting as many as five at once). Vision’s defensive move is also quite handy. Hawkeye felt too plain for me. And I don’t know why but, I had a lot of trouble playing as Iron Man.

Use of the Avengers Theme

Aside from the four playable characters, this game makes use of other popular Avengers heroes and villains. Quicksilver sometimes appears, bringing with him a health refill. If you’re playing as Cap or Hawkeye, Wonder Man appears just before each flying section and tosses you a Sky-Cycle. Namor shows up just before the underwater section to tell you that there’s a secret undersea base.

Quicksilver and Wonder Man have cameos in this game.

The Wasp actually does more than just show up and give you a helpful item. She’s actually a power up in the flying sections. When you get her, she flies in front of you and shields you from projectiles. You can press the attack and jump button at the same time to send Wasp charging into enemies.

Getting the W power up in the flying stages calls in the Wasp.

All the bosses of this game are based on Marvel Comics villains and for the most part they are accurately represented, from within the game’s design. The only complaint I have regarding the bosses is the Juggernaut, who looks and feels a little off. You’ve got some A-listers like Ultron and Mandarin, along with some C-list names like Whirlwind and the Living Laser.

The graphics of Captain America and the Avengers are a little disappointing. The Sega Genesis port was released in 1992, three years into the console’s life cycle. Yet, this game looks like a first year release when it comes to the graphics. The graphics of this game is okay, but I wish the developers added a couple more frames of animation to make the heroes’ movements look smoother. Regular enemies don’t even have animations that show they’re getting hit, they just stop in their tracks. So the combat doesn’t feel as satisfying as it does in other beat ’em up games.

The graphics of this game are okay, but they could have done better with it.

What makes Captain America and the Avengers stand out, even today, is the sound experience. This game’s themes are just so wonderfully cheesy in a heroic way. I’m glad that the developers added a music player in the Options menu because this game has some really catchy music. But what you’ll really want to play this game for are the voice clips. Throughout the game, the characters have some short lines of dialogue. And they recorded the cheesiest voice acting to match these hammy lines.

One of the funniest exchanges of dialogue between a hero and villain in video game history.

I’m not kidding. These voice clips have some serious meme potential. You’ll hear one of the best exchanges at the end of Stage One, where your hero says “You cannot escape!” and Whirlwind responds with a heartfelt “You will be the one escaping!” I want to share more but, I don’t want to spoil anyone who hasn’t played this game yet.

This game’s cutscenes are just simple words against a plain black background.

In terms of presentation, I also find this game a little lacking. There’s some neat-looking single comic panels at the start of each stage but all the plot exposition is told in plain text with a simple black background. I don’t remember if the arcade version was like this. I wish they had used more comic book panels to make this game feel closer to a comic book experience.

It’s no secret that arcade games in the past were designed to get kids to spend as many quarters as they can, so old arcade games are usually very difficult. Captain America and the Avengers is no exception; it’s really easy to die in this game. This isn’t a problem in the arcade version because all you need is another quarter and you can continue playing. 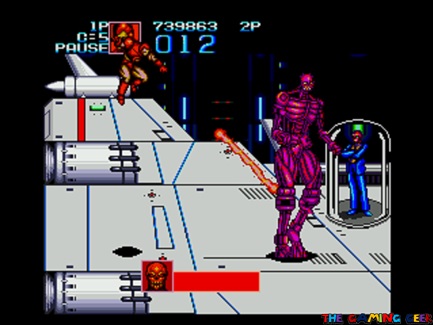 I didn’t use Iron Man that much because I’ll get to play as the character for an entire game in the near future.

The Sega Genesis version retains this difficulty but has the limitation of having only a maximum of seven continues. So this game is extremely hard to beat alone on Normal and Hard difficulty. It’s so hard to avoid taking damage, especially in some of the boss fights. And health refills are rare. I wasn’t able to try this with two player, but even so, this game should have been balanced according to how many players are playing.

Captain America and the Avengers is a simple game that could have been better with a little more depth in the gameplay mechanics. The game’s graphics still work, but they barely hold up to today’s standards. And it can be really hard when played solo.

But this is still a fun game to play. Simple works, I guess. I remember this being a blast in two player co-op, and I’m sure it still is. The biggest reason to play this today are all those cheesy voice clips. You really need to hear them at least once. It’s not a long game and you can play the entire game in Easy difficulty. So if you are able to play the Sega version or the arcade original, try this game out!

For more video games based on Marvel characters, click here. And click here to check out every Sega Genesis video game that I’ve played.