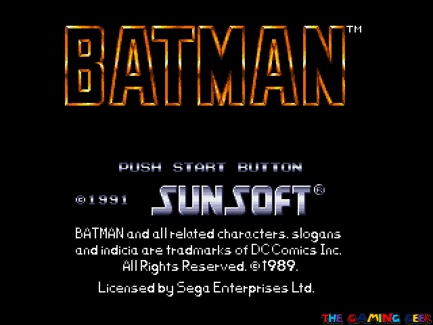 Title screen for Batman: The Video Game on the Sega Genesis.

Batman: The Video Game is an action platformer developed and published by Sunsoft. This is also based on Tim Burton’s Batman film, released two years earlier. In the game, you take on the role of Batman as he fights against Gotham City’s criminals.

Stage one features the streets of Gotham.

The plot of the game follows the plot of the film closely. You start off making your way to the Axis Chemical Factory, where Batman has his fateful encounter with Jack Napier, who becomes the Joker after this. Batman continues to face the Joker’s minions and saves Vicki Vale at the Flugelheim Museum. You get to ride the Batmobile and Batwing in their own stages as well, before finally facing off against the Joker at the Gotham Cathedral.

The gameplay mechanics are quite simple, but Sunsoft implements some minor things that stand out to me in a positive way. Batman can jump, move, and crouch. He attacks with punches when standing or jumping, and does a kick while crouching. If you tap the Jump button again at the peak of a jump, Batman does a spin that slightly increases the jump height and range. You’ll need to master this move if you want to get past the platforming in later stages.

The second level is at the Axis Chemical Factory.

Sunsoft strangely gave Batman’s jump a hitbox. Essentially, you can damage enemies just by landing on them. Batman’s costume in the film seems tough and heavy so this makes sense. This tactic isn’t reliable though, as enemies can damage you just by touching you.

Batman also has his grappling hook and Sunsoft’s implementation of it here is quite unique. You hold Up and press the jump button to fire. If it manages to latch onto something, you can press the jump button again. You then get launched upwards quickly, and you even fly past where the hook originally latched. 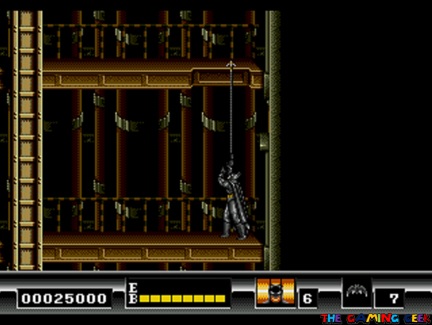 If you hold down attack, Batman does a block which works against projectiles. And he’s got projectiles in the form of his Batarangs. They fly straight forward when you throw them. He always starts with five, and can get more by grabbing the Batarang power ups which give him five more. Finally, he can have up to 99 Batarangs in this game!

One thing I don’t understand is Batman’s health. He always starts out with four health boxes instead of the full eight. You need to grab power ups to get full Health. It’s weird.

Stage four of the game is a Batmobile stage.

You face a good variety of enemy vehicles in this stage. There are normal cars which just try to get in your way, attempting to bump into you. There are tank-like vehicles with different weapons, such as a straight shooting gun and a spread shot. There’s an end level boss in the form of a tank that has a variety of different shots.

Stage five features the Batwing. It looks exactly like the Batwing in the 1989 movie!

Later on, Batman steps into the cockpit of the Batwing. This is also an auto side scrolling section. Your Batarangs are again replaced with homing missiles. In this stage, you face off against different types of aircraft, with another boss waiting at the end.

In terms of graphics, I’d say Batman: The Video Game is above average. The sprites are a little small for a 16-bit title, but they are detailed enough and are well animated. It’s easy to tell enemies apart, and you can even recognize the bosses, which are all based on minor enemies in the 1989 film. The stages look like the locations that they are representing, whether it be the Axis Chemical Factory of the Flugelheim Museum.

I’ve said this before with Sunsoft’s Batman games – their soundtracks are really good. And this game is no exception. Even if they weren’t able to use the themes from the 1989 film, the stage music fits Batman and his adventures. I don’t know why this game isn’t being talked about when discussing Sega Genesis titles with the best music, because this should be in the conversation.

Accurate to the Source Material

What really made me like Batman: The Video Game for Sega Genesis is how hard the developers tried to be accurate to the film. Each stage is a reference to where you saw Batman in the movie, and it follows the correct sequence. Minor bad guys make an appearance in the game as bosses, and the way they act is true to what they did in the film. I definitely remembered the guy with the two swords that Batman knocked out with a single punch, as well as the guy in the museum with the boombox.

The game’s bosses are minor villains from the movie that had a distinct trait that made them stand out.

Even the boss battle with Jack Napier was designed with care. He’s actually not difficult to beat. Land one good hit, and he goes diving into the chemicals. However, it’s a little tricky to get to him.

The game recreates the moment when Jack fell into the chemical vat that turned him into the Joker.

The Batmobile and the Batwing both look like what Batman had in the movie, at least as close as how 16-bit graphics can represent it. My only real complaint involves the game’s introduction. Instead of just setting up the plot, it actually tells the complete story and goes as far as Batman’s final confrontation with the Joker at the Gotham Cathedral. There’s only one cutscene in the game, which looks great but it’s the only one.

The game’s introduction is just too long, and the text ends up covering the wonderful Batman, Joker, and Vicki Vale images.

I really think the developers could have cut this long introduction down, and inserted more cutscenes in-between the game’s stages to help tell the story better.

Batman: The Video Game does have a few flaws. It can feel a little obnoxious at times, with the number of enemies appearing at once or how level hazards are arranged. However, the game is generous with continues (you have four) and in the Options menu, you can choose to play with a maximum of seven lives. You respawn exactly where you die. So even if I originally thought this game was a little unfair, it’s actually more on the easier side.

The final stage follows Batman as he makes his way to the rooftop of the Gotham Cathedral.

If we were talking about this game when this was originally released, I’d say that this is a little short on content and challenge. I can beat this game in an hour. That’s not a lot of value for the cost. But in today’s time, there is a place for short games. If you’re looking for a Batman adventure that you can beat in one sitting, this game is a good candidate.

I had a lot of fun with Batman: The Video Game. Tim Burton’s 1989 Batman film is still well-regarded today, and I feel the same way about Sunsoft’s Sega Genesis tie-in. If you are able to find a way to play this game, you should definitely give this one a try.