Sometimes, especially when playing an extremely long or really tough game, I play something else along it as a palate cleanser. Viewtiful Joe is just frustratingly hard sometimes, I can’t play it right after a tough stage, so a game that’s far less stressful would serve well to calm my nerves – X-Men Legends II: Rise of Apocalypse.

X-Men Legends II: Rise of Apocalypse is an action role-playing game released on the sixth-generation consoles. The sequel to the popular X-Men Legends, this game is set in the same universe as it’s predecessor. What sets this apart from the previous game is that you get to control popular Brotherhood of Mutants characters like Magneto and Juggernaut alongside the usual X-Men protagonists. 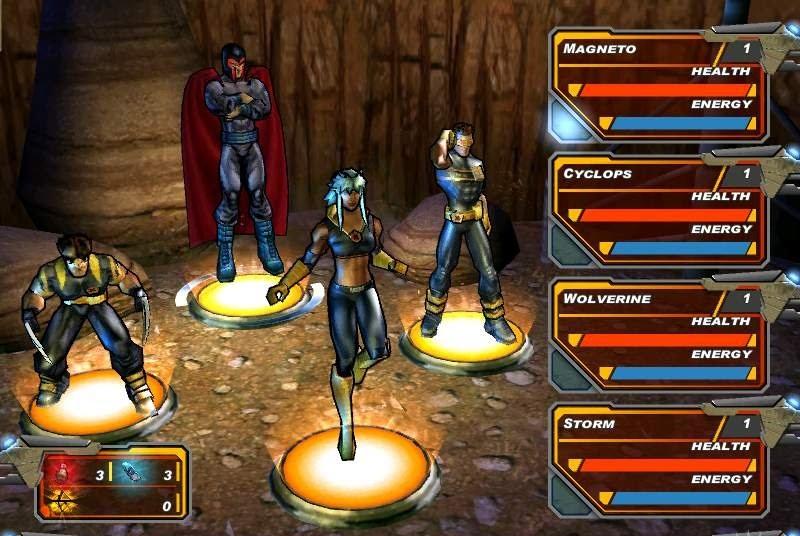 The team management screen, featuring the characters that you’ll start the game with. Arguably the most popular X-Men characters to date.

Typical of roleplaying games, X-Men Legends II features a large roster of fifteen characters that are playable from the get go, as well as additional characters that can be unlocked as you progress in the game. Each character has his/her own set of powers and abilities which you need to factor in when considering which heroes to choose for your team, as you can only have four active heroes in your team at any given time.

To keep it simple for myself, I classified each hero as either a melee attacker or a ranged attacker; for example, Wolverine, Colossus, and Juggernaut are all melee attackers while Cyclops, Storm, and Magneto are all ranged attackers. I then make sure that I’ve got at least two melee attackers and two ranged attackers in my teams. The game also classifies the characters according to what kind of powers they have, either Physical, Energy, or Mental. This is also important to consider as the enemies that you’ll face may be resistant to these traits.

Iceman shoots out a beam of ice to freeze enemies in place.

Being an action RPG, combat happens in real time. You control one of the four characters, with the rest controlled by the game’s AI. However, it’s easy to switch control from one character to the next – the hero icons are arranged in the form of a cross and all you have to do is press the appropriate button on the controllers directional pad and you’re all set. 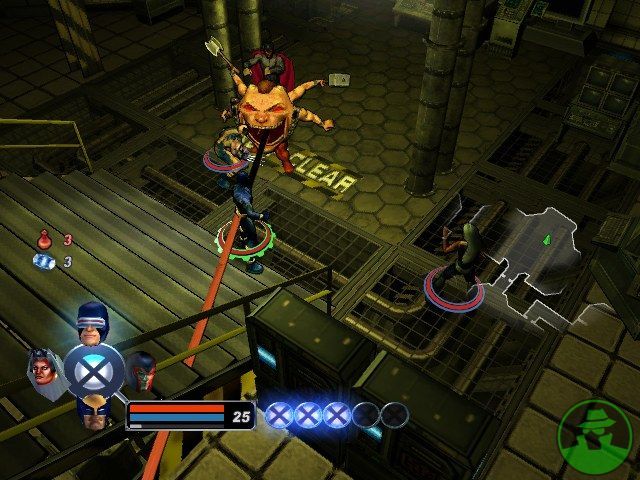 The icons at the lower left indicates which hero to switch to – up for Cyclops, left for Storm, down for Wolverine, and right for Magneto.

The game has several features that I really like. For one, the game uses a lot of comic book artwork for its loading screens, and as a fan of Marvel comics seeing these loading screens is a treat. You don’t get to see all of the images right away; only a few images are available at the start but as you progress further, new loading screens become available. It’s a small thing, but I do look forward to the new artwork whenever it gets unlocked. 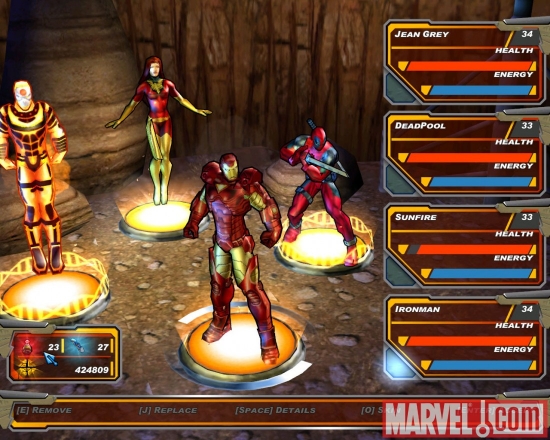 Despite matching the color motif, Iron Man still looks out of place in this team.

I also like the inclusion of Iron Man as a secret, unlockable character. There are hundreds of characters in the Marvel Universe, and the game developers could have chosen a character who has closer ties to the X-Men universe but they went with Iron Man. At the time of this game’s release (2005), I was actually wondering about this because there were other characters that I wanted to see. Now though, Iron Man’s popularity has increased tremendously thanks to the Marvel movies, and I already know that Marvel Ultimate Alliance is next in this series, so I can see that his inclusion in this game serves as a hint to where the series is going to next. 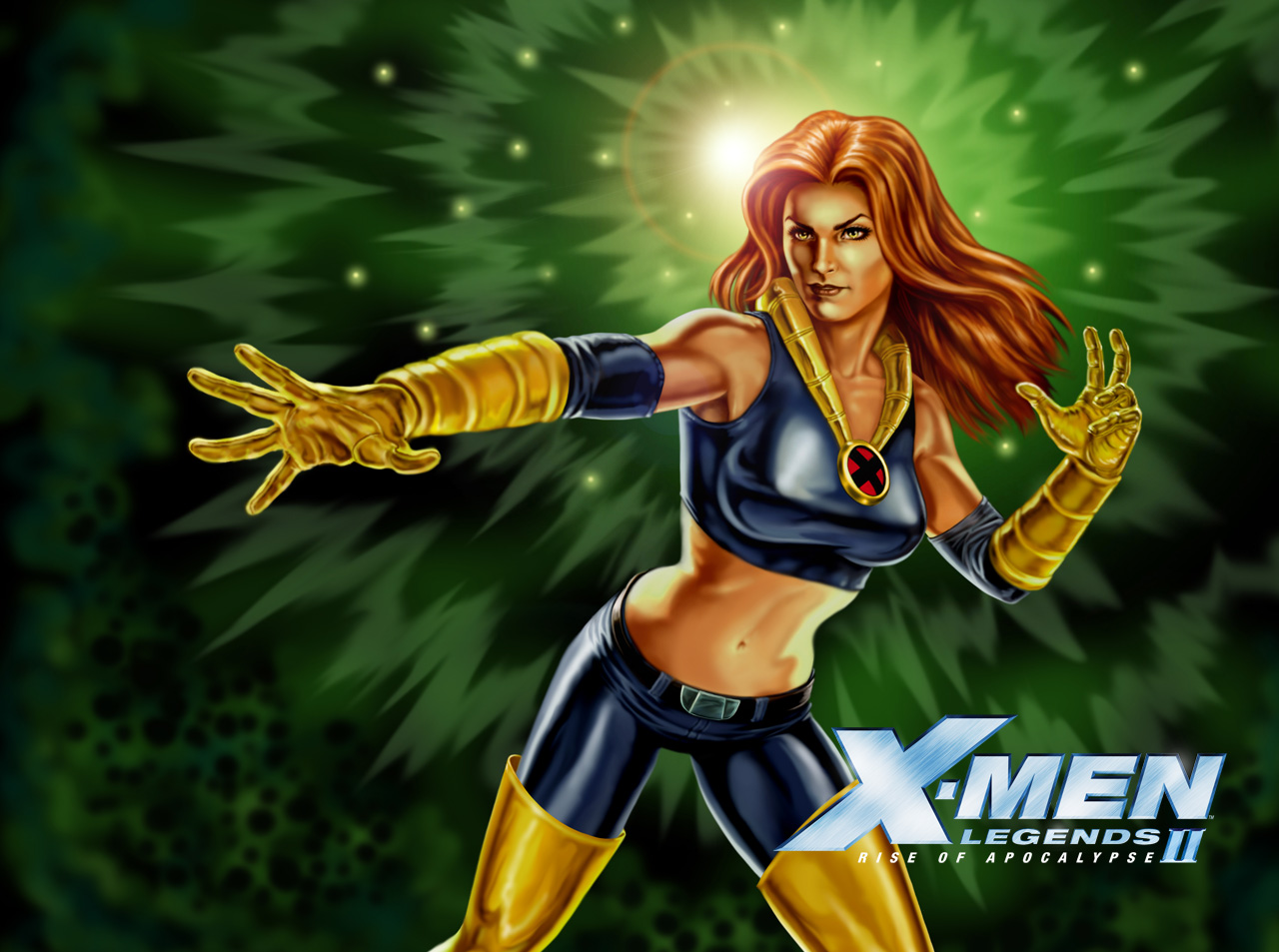 Jean Grey’s loading screen art. I prefer the one from X-Men Legends though. 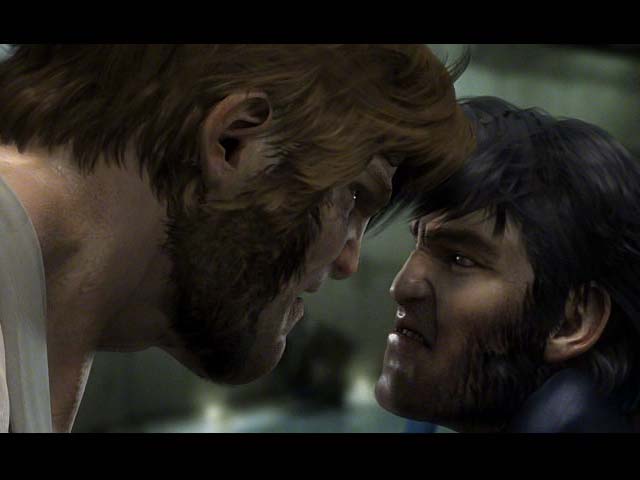 Wolverine one-ups his longtime rival again – he’s a playable character in this game whereas Sabretooth just watches the action from the sidelines.

It’s been eight years since the game’s release, and I can say that it didn’t age well. It’s still a good game, but it doesn’t have that timeless quality that other games of it’s generation has. Graphically, it still looks nice, as the cel-shaded art style represents comic book characters quite nicely. The storyline is decent enough, and there’s really nothing wrong with the game’s mechanics. But I have to admit, the only reason why I’m playing this game is because I bought a copy of it and not playing it is a waste of the money that I paid to get this. Besides, I also have Marvel Ultimate Alliance, and I’m planning to complete that as well, so might as well play this, right?