After playing a long RPG-type game, I decided to move on to a more action-oriented game, so this time around I’m going to try and finish Viewtiful Joe by Capcom.

Viewtiful Joe is a 2D beat ’em up action platformer game. In it, you play the role of Joe, a young man who is shown watching a movie with his girlfriend, Sylvia. The movie is about a tokusatsu-like superhero named Captain Blue, and at the movie’s climax, Sylvia is captured and brought into the movie by Captain Blue’s arch-nemesis. Joe is also transported into the movie and is granted special powers by Captain Blue.

The game’s protagonists: Joe, looking at a store window display featuring a Captain Blue toy, with Sylvia behind him.

In the game, Joe fights different types of robot minions by beating them up with combinations of punches and kicks. What sets him apart from other video game heroes is his VFX powers, all of which taught to him by Captain Blue and are all based on different movie special effects. However, using these VFX powers will drain Joe’s VFX meter, and if the VFX meter runs out, Joe turns into his regular self. 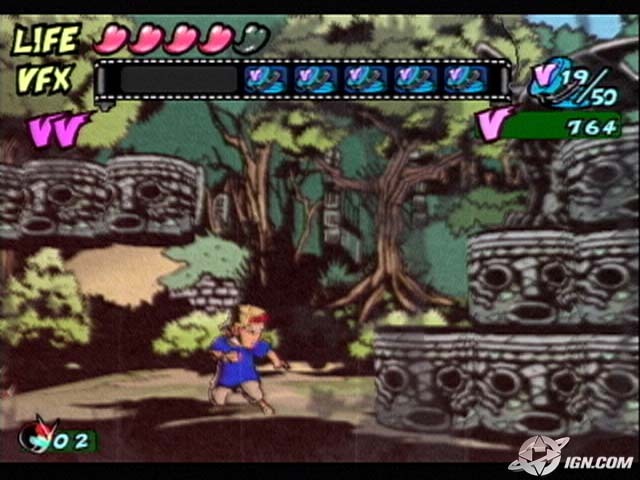 The VFX meter refills constantly, but Joe won’t turn back into his Viewtiful self unless the first gauge fills up completely. This leaves Joe very vulnerable and unable to use his VFX powers.

The first VFX power that he’ll is Slow, and Joe can use this power to slow down everything, including himself and his enemies. This power has a lot of different applications, including slowing down time to make propellers rotate slower  resulting in flying devices to fall down, to slowing down projectiles to allow Joe to deflect them with a single punch or kick. Several times in the game, you’ll encounter slot machines with reels that spin really fast. In order to get the appropriate result, you’ll need to use Joe’s Slow. 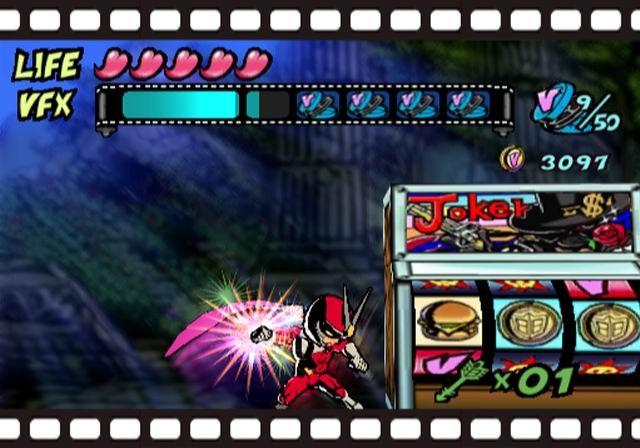 Aside from getting bonus health and extra Viewtiful points, Joe needs to obtain a key from this slot machine in order to advance.

Captain Blue then teaches Joe the VFX power of Mach Speed which makes Joe really, really fast. Joe can use this power for quickly beating up enemies, and if you stay in Mach Speed while punching/kicking a lot, Joe eventually bursts into flame. However, Mach Speed drains his VFX meter a lot, so I rarely use this. Most of the time, I only use this power if I need to light something up, or if I need time to run faster. Once upgraded, this power will create afterimages of Joe that will also hit enemies, and more importantly, gather items in the background. 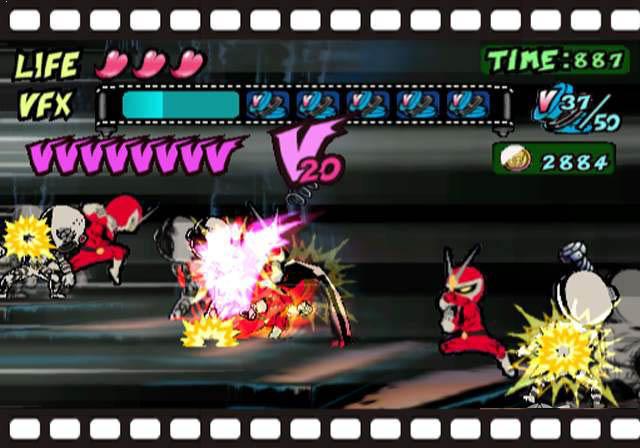 While it might sound like it’s better to make Joe faster than slower, it’s actually very hard to control Joe when he’s  faster than everything else.

The final VFX power that Captain Blue will teach Joe is the VFX power of Zoom In. While zoomed in, Joe’s moves become more flashy and powerful – his punch does more damage, and instead of kicking, Joe does a flip that hits enemies both behind him and in front of him. Try to Zoom in in mid-air, and Joe comes spiralling down, hitting everything below him like a drill. Jumping up while zoomed in will send Joe flying like a tornado, and if he’s standing still? Joe strikes a pose for the cameras, of course. 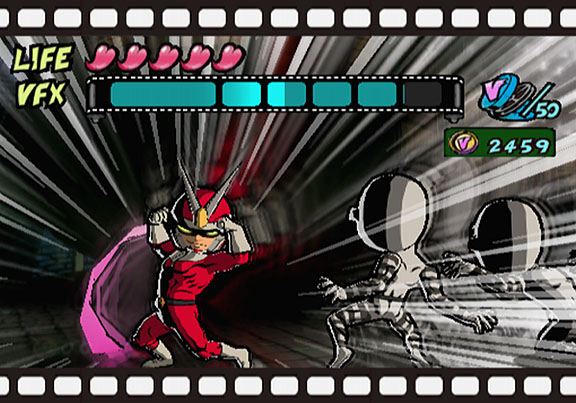 Villains are in awe of Viewtiful Joe.

Viewtiful Joe, when it was released, was renowned for going back to the roots of traditional gaming where everything was a challenge and beating a video game required hours of play and mastery of patterns.  It received some amount of criticism for being too hard, and let me tell you, this game is one of the hardest games that I’ve played thus far. This is as hard as most games in the 8-bit or 16-bit era of video gaming – think Castlevania, Mega Man, or even Super Mario Bros. 3. 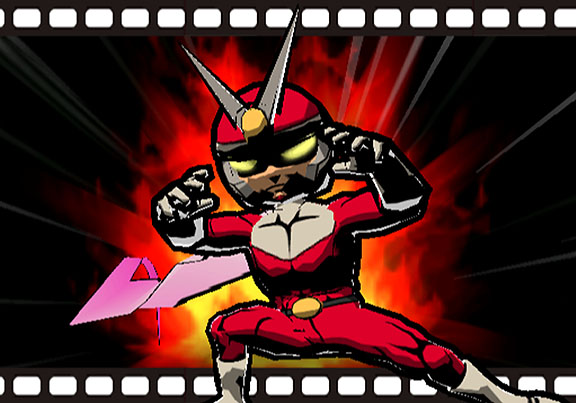 Despite being very powerful, the game’s difficulty ensures that Joe will get his butt handed to him a little too often.

It’s a really good game, but I find it frustratingly difficult. Initially, I played with the difficulty at the Adults setting, but it was so hard, I couldn’t even make it past the second episode. I’m playing it now on the Kids level of difficulty, and at episode 3, I’m already finding it to be a chore. I think I need to approach this game with a different mindset completely, but right now I’m already prepared for the possibility that I won’t be able to finish this game – at the very end, a gauntlet of five boss battles without any rest or reprieve is awaiting me.

Will Viewtiful Joe, as controlled by me, be able to beat his opponents, save Sylvia, and make Captain Blue proud? We’ll see.