I’m done with James Bond 007: Everything or Nothing, and now it’s time to move on to a new game – Paper Mario: The Thousand Year Door.

Before I start talking about that game, let me say this about James Bond 007: Everything or Nothing – this game really put my video gaming skills to the test. I hate to admit it, but I think I failed that test – I wasn’t able to finish the last mission on Normal mode and had to settle for completing it on Easy mode because that effing mission was just too hard for me. I might revisit that game soon, but right now I’d like to move on to other games and check this game off my list.

So, back to Paper Mario: The Thousand Year Door – this is a role playing game based on the world of the Mario Bros. The first thing noticeable about this game is the art style. All the characters are flat “paper” cutouts in a three-dimensional environment (hence the term “Paper Mario”). It’s an interesting design choice and it kind of reinforces the general perception that Nintendo games are for a younger audience, but I have to admit, the game looks really, really good. I chose this as my next game because I wanted something that’s a little slower paced compared to an action game. I have to say that this game contains a lot of throwbacks to several Mario games released in the past, I’ll try to mention as many as I can while talking about it. 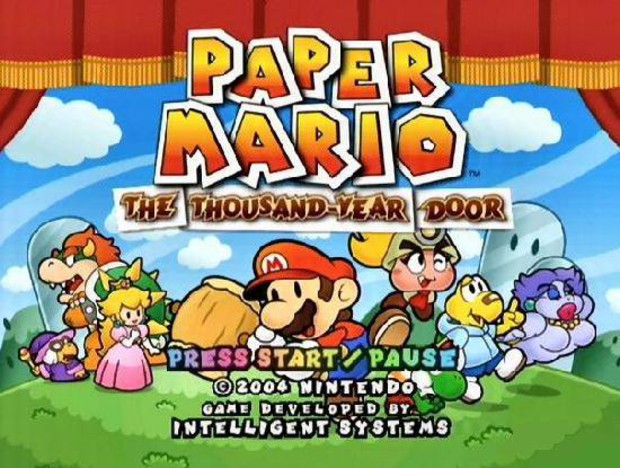 Typical of role-playing games, Paper Mario: The Thousand Year Door is a game that has you exploring different areas and meeting specific requirements to move the game’s story forward. While there are several playable characters, unlike most RPGs, you can only have two active characters at a time. Mario is the main character and cannot be removed from the active party. As the story progresses, you meet different characters that join you on your adventure. 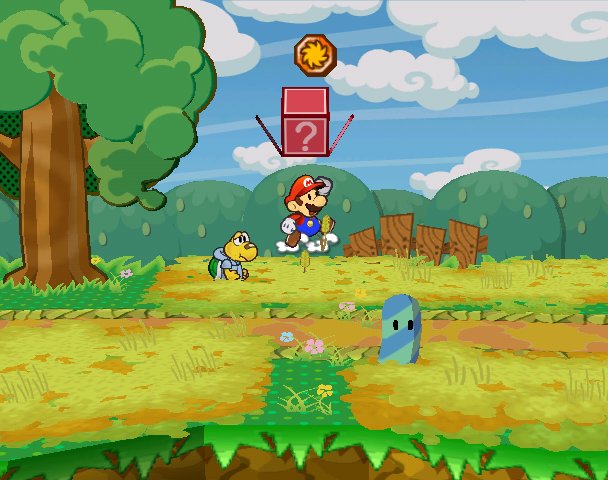 The question mark boxes from the older Mario games are also in this game.

As Mario, you do more than just walking around; you can jump over obstacles or to reach higher elevations. He also has his hammer from the original Donkey Kong game to hit obstacles. Enemies also appear in the exploration parts, and Mario can either jump on them or hit them with his hammer as a first strike. Mario’s active partner will also follow him around, and each partner has an ability that can be used in the exploration part of the game. For example, his first partner Goombella will tell you different tidbits about characters that you’re talking to or give you hints or miscellaneous information about the area you’re in.

I have to note though, that the paper cutout art style is more than just for aesthetic choice. The design makes use of Mario’s flat characteristic and incorporates it in the gameplay. Early in the game, Mario can get the ability to turn into a paper airplane which allows him to glide over short distances. 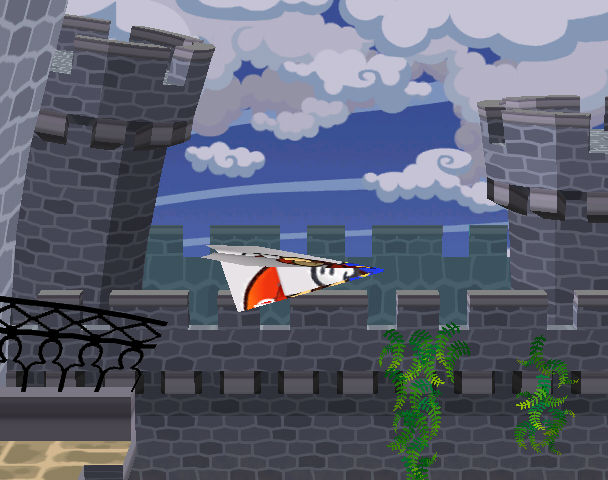 Ever see Nathan Drake do this? No? Of course not, he’s not Super like Mario is.

Mario can also orient himself a little differently to walk through narrow gaps between walls or on narrow paths. I’ve only been playing the game for a little over 7 hours, I still haven’t seen all the paper-related abilities that Mario’s going to get. 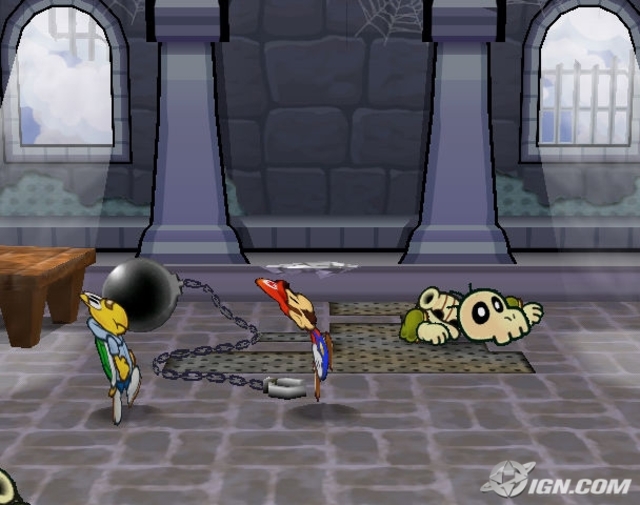 A major part of any role playing game is the battle system, which can make or break any role playing game in the eyes of a gamer. Paper Mario: The Thousand Year Door‘s battle system follows basic turn-based combat rules which are typical of RPGs: Mario takes his turn first, where he can attack, use a special ability, use an item, or run away from combat. Then, it’s his ally’s turn, then the enemies get their turns. First strikes and ambushes can also occur, giving either Mario or the enemies one extra attack at the start of the fight.

What sets Paper Mario: The Thousand Year Door apart though is how attacks are done – each attack involves a task that you need to do in order to do more damage. For example, Mario’s Jump attack does 1 Damage to enemies. When doing a Jump Attack, if you press the A Button right at the moment that Mario hits the opponent, he’ll get to do a second Jump Attack. When using his Hammer, you’ll be asked to hold the Control Stick left and release it the moment the meter hits maximum to do double damage. All of Mario’s and his allies’ other special attacks and abilities have similar mechanics that keep players on their toes during battles. 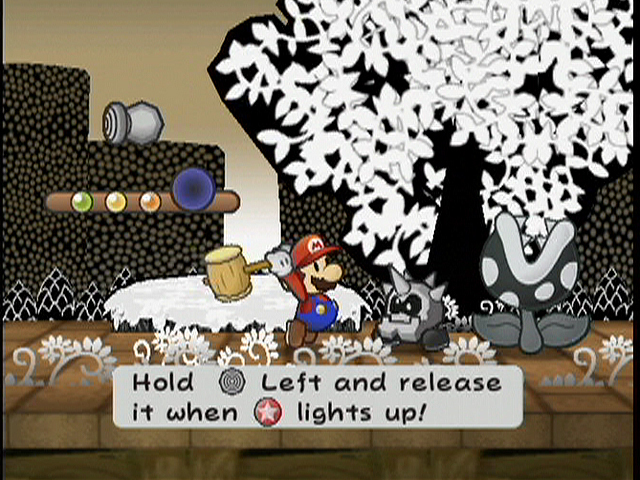 Bring the hammer down! At the right time, for double damage!

I forgot to mention – remember the intro to Super Mario Bros. 3, where a red curtain was pulled back to reveal a stage? In a similar fashion, each battle in Paper Mario: The Thousand Year Door is played out on stage, with an actual audience watching. There is, surprisingly, audience participation; depending on how well or how badly you’re doing, the audience can either throw dangerous objects or helpful items at you. They can also cheer you on, which powers up your abilities. 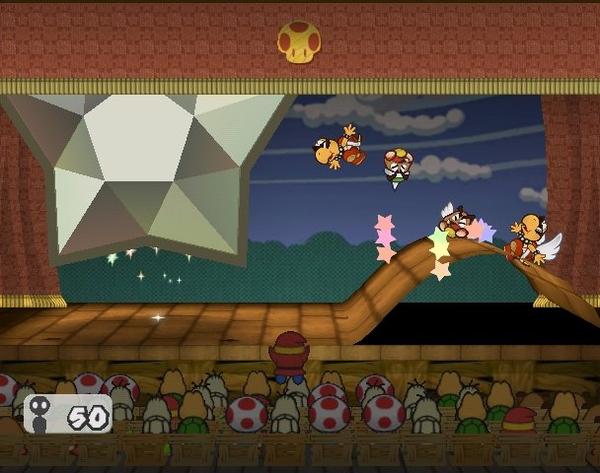 Mario always manages to draw a crowd. Is it the moustache?

In addition to Mario’s adventures, the game also puts you briefly into the shoes of Princess Peach, who as usual is abducted by an enemy, and Bowser, who is simply furious that anyone else other than him would dare to kidnap Princess Peach. Bowser’s segments in particular are quite fun, as it puts the dictator in a remake of the first Super Mario Bros. game. 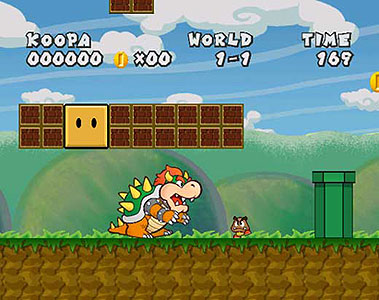 You should see the effect that those Mushroom and Star power ups have on Bowser.

All in all, Paper Mario: The Thousand Year Door is a really fun and well-made game. I almost skipped this because of it’s “kiddie” style, so I’m glad I gave this a try. Beautiful art style, solid controls and game mechanics, throwbacks to past Mario games, a funny storyline, and you get to play as Bowser in Super Mario Bros. stages – what more can you ask for?