I’ve played a lot of Gamecube games before I started writing about video games, and I thought it was a disservice to not share my thoughts on them, especially since I’ve played a lot of really good ones prior to putting up a blog. So I’ll talk about one of the games that really got a lot of my attention back then – Mario Kart: Double Dash!!

Mario Kart: Double Dash!! is the fourth game in the Mario Kart series. It’s a fast-paced kart racing game with twenty different characters from the Super Mario Bros. franchise as kart racers. What sets this game apart from other racing games is that it doesn’t try to be realistic – a big part of the game involves the use of different items in order to gain advantages or to put the other racers at a disadvantage. To obtain the items, you have to run through question mark boxes scattered along the race track.

Some of the more popular items in the Mario Kart franchise are the different colored shells that act as projectiles, the banana peels which can be dropped behind you or thrown in front of you, the star which renders you invincible for a short period of time, and the mushrooms which can give you a momentary speed boost. In order to win races you need to have both good driving skills, strategic use of the items available, and luck in terms of getting the right kind of items while avoiding others.

Mario Kart: Double Dash!! is the first Mario Kart game where you can choose different karts. There are a total of twenty one karts in the game, some of which are unlocked as you meet different objectives. Aside from having different appearances, these carts also perform differently from one another – some karts have better acceleration or handling, some karts can attain higher speeds or are heavier. 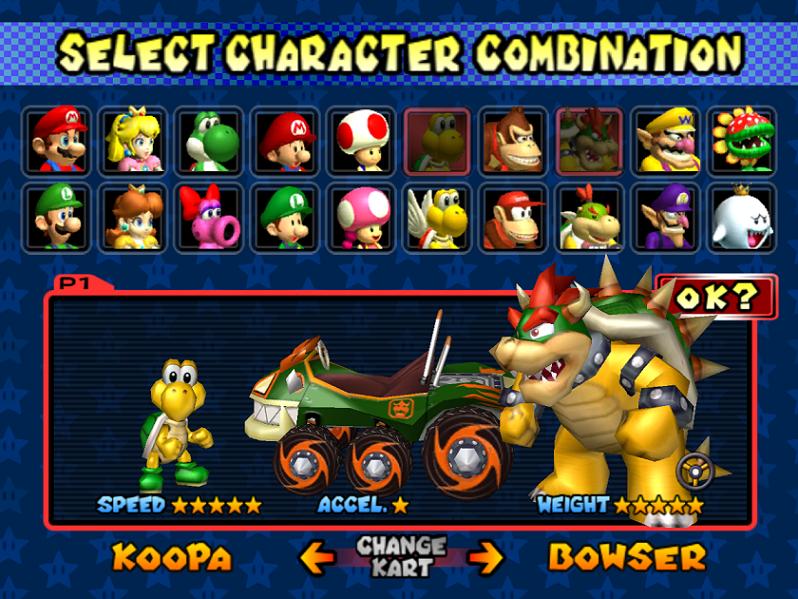 Each kart has it’s own Speed, Acceleration, and Weight rating.

I have to say, I liked this aspect of Double Dash!! – before this game, players chose characters because of how they looked, or how much they weighed, but this time around there’s actually more strategy involved when choosing your character. 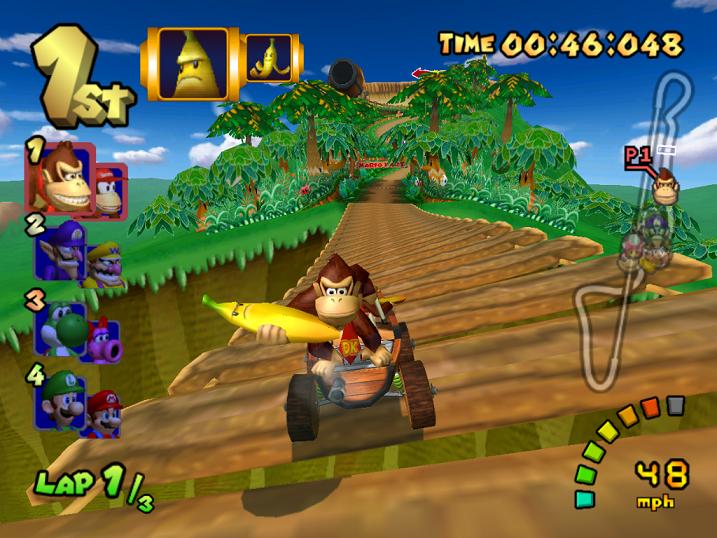 Diddy Kong takes the wheel as Donkey Kong prepares to use their special giant banana item.

Aside from the characters having their own special items, Double Dash!! also involved the use of pairs of racers instead of the usual single racer. Basically, you get two characters, the first one being the driver and the second one an assistant, riding at the back of the kart. With a press of a button, you can switch between drivers and assistants. Whenever you get an item, the assistant ends up holding the item. You can then switch the two and get another item, so you end up with two different items at the same time.

This allows for new levels of strategy in terms of character selection and item use. First of all, you have to decide on either choosing two characters with the same special item (double your chances of getting a specific item) or a different special item each. For example, you can go with Toad and Toadette to ensure that you have more chances to get gold mushrooms, or Toad and Paratrooper so that you can either get the gold mushroom or the triple red shell. Getting two different special items might sound nice, but you’ll only get a certain special item depending on whose driving the kart when you crash into the question mark boxes, and you’ll never know when the game will award you with a normal or special one. 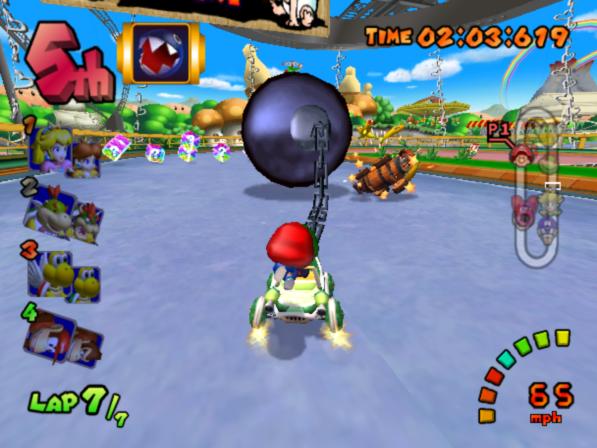 Baby Luigi unleashing their special item, the Chomp Chomp. I used to dread this pair a lot.

Secondly, you can opt to save the more useful items for later use. In other Mario Kart games, you’d have to use up your current item in order to get a new item, but in Double Dash!! all you have to do is swap out your driver. So, if you get a red shell early on, you can swap the character holding the red shell and save it until you really need the red shell.

Despite the new levels of strategy, racing in pairs wasn’t received well by audiences, primarily due to the multiplayer limitation that it imposed. The previous Mario Kart version, Mario Kart 64, was the first game to allow 4 players to race against each other. Due to the pair racing mechanic, only two players can go head to head in a race. A third player would mean that two players have to work together as a pair, and four players would be required to pair up. It might sound fun at first, but whoever is relegated to the role of assistant is limited to holding/using items and “pushing” against other opposing racers whenever they’re close enough. But believe me, being an assistant is not much fun. The game supported multiplayer  but that required purchasing a broadband adapter and connecting online. So essentially, the paired racing approach eliminated the ability for four players to race against each other. 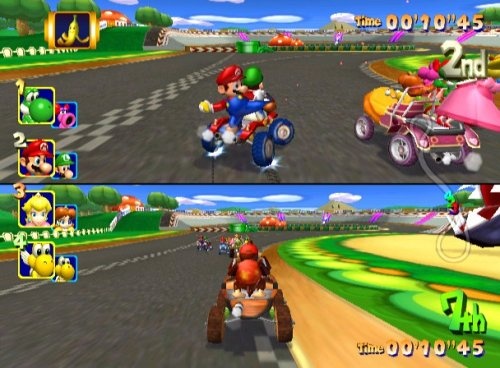 Mario Kart: Double Dash!! only allows two pairs to race against each other without using the Broadband adapter.

Despite this, I really enjoyed the game. I’m not a fan of racing games, yet my nephew and I spent enough time on this game that we ended up unlocking all the hidden content that the game had to offer. The only reason why we stopped playing Mario Kart: Double Dash!! was because I had obtained a copy of Mario Kart Wii which effectively replaced Double Dash!! in our video game rotation.

Mario Kart: Double Dash!! filled in that slot in my game library for racing games up until I got the later versions, and I still miss how each character in the game had their own special item. It is considered as one of the best games in the Gamecube library and I agree, it was a must have for its time and definitely worth getting a copy of if you’re rounding out your Gamecube video game collection.