Gamecube Games – James Bond 007: Everything or Nothing
0 Comments

One of the reasons why I enjoy video games is because it grants me the opportunity to step in the shoes of famous characters, so I’m always looking out for games that use licensed characters coming from movies, TV, comic books, and other forms of media. Video games featuring Batman and other comic book characters, the Lord of the Rings characters, Star Wars characters, and the like – these get a little more of my attention. One game based on a popular movie franchise caught my attention, so I picked up a used copy early this year to get a taste of what it’s like to be a secret agent working for MI6 – James Bond 007: Everything or Nothing. 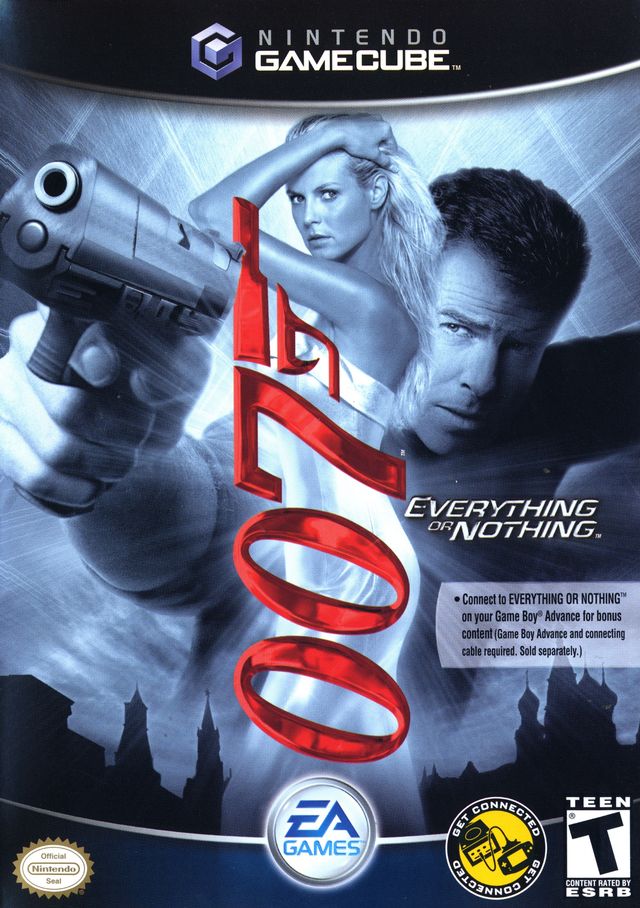 I’m not a big James Bond fan, but when I saw this game for sale I checked out how this was received when it first came out and it garnered good reviews. What really caught my eye though was the production values of the game – similar to the Lord of the Rings games that were released right after Peter Jackson’s films, EA Games went out and got the same actors to reprise their roles for the game. Note that this was released in 2004, and back then Pierce Brosnan still portrayed Bond. 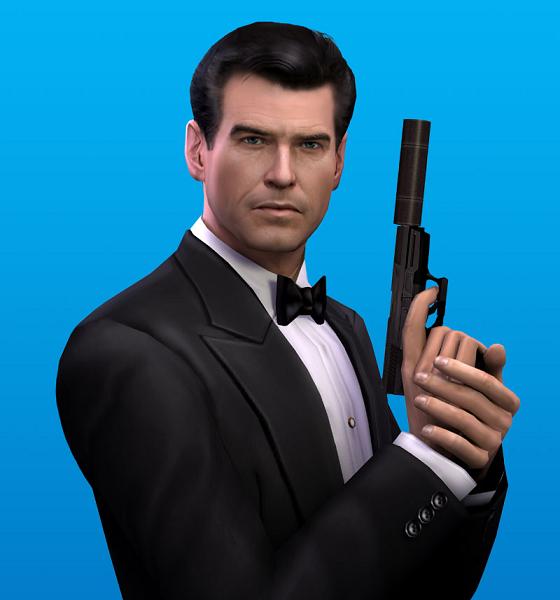 Pierce Brosnan was the James Bond of my generation.

While based on the film franchise, James Bond 007: Everything or Nothing is not based on any of the 007 films that were released. Instead, the game has its own storyline, and as such EA Games also hired other actors to portray new characters; the most notable being Willem Dafoe who portrays the main bad guy, and Heidi Klum, who adorns the game’s cover. They even went out and got Mya to do the theme for the opening credits. But setting production values aside, is the game any good? Is the game still good? For a game released nine years ago, it still manages to hold up.

For the record, I think Heidi Klum makes for a great looking Bond girl.

Mechanically, 007: Everything or Nothing is a third person shooter similar to Metal Gear Solid and Splinter Cell. You control James Bond as he runs around, shooting/fighting enemies as necessary. In true 007 fashion, Bond has access to different gadgets and weapons, which is nothing revolutionary in the world of video games. However, 007: Everything or Nothing does have three cool things that it does differently compared to the other third person shooter games. First is the “Bond Sense” which is essentially a mode where the game is slowed down almost to a crawl as Bond cycles through his weapons or looks around his environment to see if there’s anything that could be useful to the situation. In a different game, it’d be nothing but a glorified Pause menu system but in a Bond game, it’s a good representation of how sharp and fast-thinking James Bond could be in the midst of all the chaos going around him. 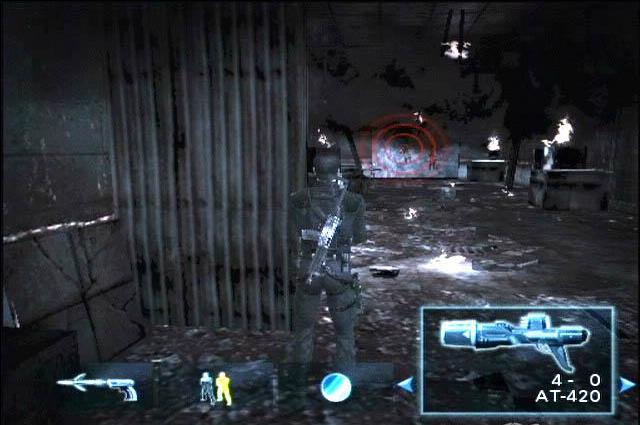 My “Bond sense” is tingling.

The second is the decent segments where James Bond gets to use vehicles at his disposal. Vehicles always have their place in James Bond movies, especially cars, and in this game Bond gets to use a sportscar, a SUV, a motorcycle, and a helicopter. I’ve already had my hands on the SUV, the helicopter, and the motorcycle, and I have to say that these segments really play well.

Q always tells Bond to bring his vehicles in undamaged – I wonder if Q is aware of who he’s actually working for.

The third aspect, and I think this is underrated in third person shooter games, is James Bond’s hand-to-hand combat skill. The first move that impressed me is how he handles armed opponents if he gets close enough – he holds onto the bad guy’s rifle, pulls on it, and does a combination which ends up with Bond using the rifle as a lever for an over-the-shoulder throw. There’s another move which happens whenever Bond manages to move his opponent close to a wall – he does a combination attack that ends with Bond grabbing the head of the bad guy and slamming it against the wall for a knock out. 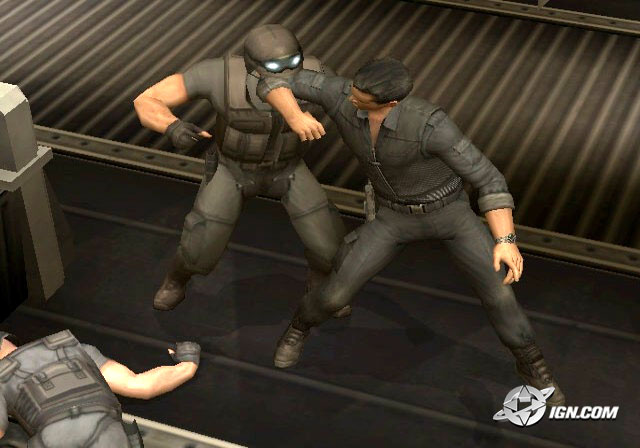 Bond’s different combinations vary enough to make you forget that this is a game.

There’s also a Multiplayer mode that I’ve yet to try because my nephew’s too busy to try it with me. So I don’t have much to say about that mode other than it’s another bonus to a game that I’m already enjoying as a single player game. I remember playing the two player mode of Splinter Cell: Double Agent, which bored me and my nephew to death – it was a complicated game so we found the two player mode to be a bit tedious to play.

I’m really enjoying this game, but there’s an aspect of the game that is really causing me to almost pull my hair out in frustration – the game is divided into a lot of short missions (29 total) and you can’t save your game in the middle of one. So, unlike most other third person shooter games that I’ve played, there’s no way to save those little bits of progress that you make. Any time you die in a mission, you (usually, there are exceptions) have to start from the beginning of the said mission. So, if you’re near the end of the stage and you die, well, tough luck – it’s back to start for you. 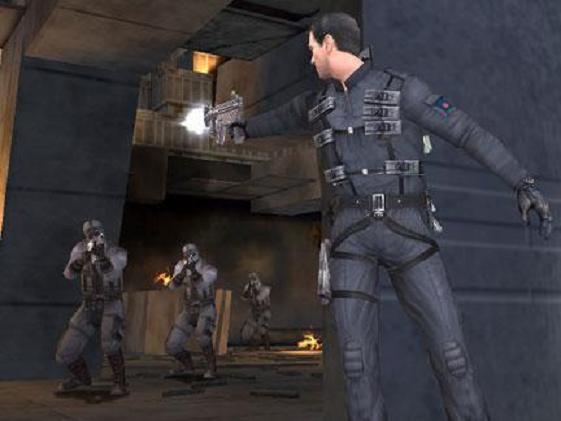 Three against one? The odds are definitely in Bond’s favor.

It kind of takes me back to the good old days of gaming where you really need to memorize the patterns of the enemies and the stages in order to complete it successfully. I normally wouldn’t mind, but I ended up spending more than an hour trying to complete a mission that normally doesn’t last longer than 10 minutes. There’s one particular mission that irks me right now, where the time limit for a high score is at 2 minutes. Know what my best record is? Over 5 minutes.

The game has grown on me now, but I’m a little afraid that it might get too difficult for me to finish. I still have a lot of unfinished Gamecube games and not a lot of time, so I might end up giving up on this one. No question, it’s definitely a worthwhile purchase that’s going to keep me busy for a while.