Another one of my Gamecube games that I didn’t get to finish is the only Fire Emblem game to make an appearance on the Gamecube – Fire Emblem: Path of Radiance. Before we get to this game, let me talk about the Fire Emblem franchise first. 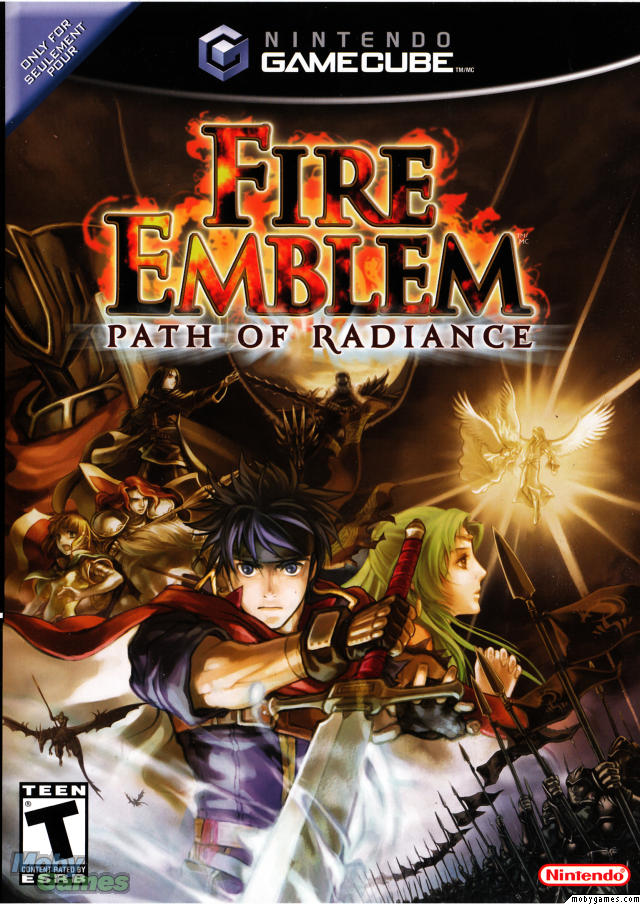 The Fire Emblem games are tactical turn-based RPGs where players build up an army of different characters and guide them through several missions. Developed by Intelligent Systems and published by Nintendo, Fire Emblem games are released exclusively on Nintendo systems, which may be why this series is not as popular as the Final Fantasy franchise, but in the genre of tactical turn-based RPGs, no other franchise can compare to Fire Emblem, which has spawned 11 individual games dating back to the days of the Nintendo Famicom (5 of which has been released internationally). The first Fire Emblem game officially released to English audiences was aptly titled Fire Emblem, released for the Gameboy Advance in 2003. Notably, this is already the seventh Fire Emblem game, the first six limited to Japan releases.

One of the in-game missions. Looks almost like a board game, doesn’t it?

While there have been other tactical turn-based RPGs released (Tactics Ogre and Final Fantasy Tactics, to name a few), the Fire Emblem games have signature characteristics that differentiate it from the other games, the first of which is the Weapon Triangle that influences the combat system. Characters in the Fire Emblem games usually equip either lances, swords, or axes, and the Weapon Triangle assigns a rock-paper-scissors type of advantages and disadvantages to these, with lances having an advantage over swords, swords having an advantage over axes, and axes having an advantage over lances. This makes the player think about the composition of his army – do you bring axe-wielders with you, or swordsmen, or lance-users? Of course, it depends on what you’re facing – if you’re against an army of lance-wielding cavalry, you may want to have more axe-wielding fighters and warriors with you. 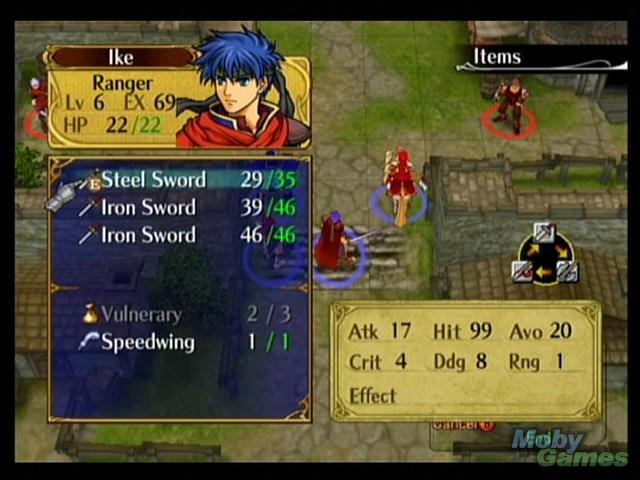 Weapons in Fire Emblem have a limited number of uses and break down once you’ve used them too many times. 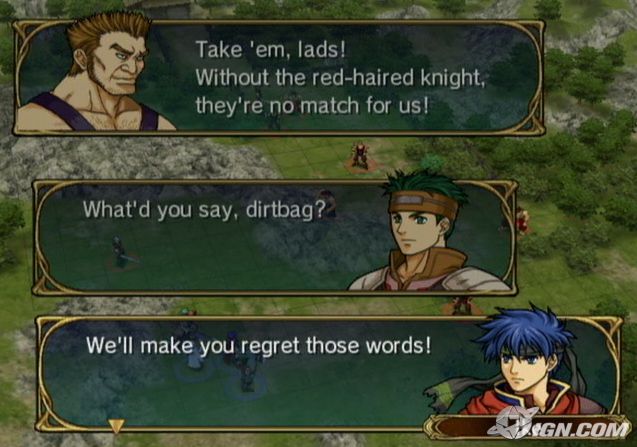 Another distinct aspect of the Fire Emblem games are fatalities – unlike in most games, whenever a character dies in battle, he/she dies permanently. You can’t revive or play as that character for the rest of the game. This leads to some frustration for players as this forces them to either replay the battle where the character died in order to prevent the death, or to just carry on with the game.

The last aspect of the Fire Emblem games that is distinct (although I’m sure other games have this feature) is the lack of training or practice missions that players can take to level up their characters. This forces players to choose and commit to the characters that they use regularly.

You should now have a good idea on the kind of game that Fire Emblem: Path of Radiance is. Outside of the improved graphics, sounds, and FMVs, there’s really not much difference if you compare Path of Radiance to GBA’s Fire Emblem: The Sacred Stones as both games play the same way with minor tweaks to the game system. Why should I bother playing it, then? 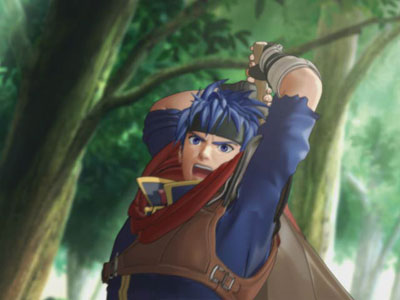 Ike, the main protagonist of Fire Emblem: The Path of Radiance.

The story, of course, which is the core of any RPG. The story of Fire Emblem: Path of Radiance revolves around a Ike, a member of the Greil mercenaries residing in the country of Crimea, which is led by his father, Commander Greil. When the country of Daein invaded Crimea, Ike and the Greil mercenaries encounter Princess Elincia of Crimea and are caught right in the middle of the conflict after they decide to help her escape. In their quest against Daein, Ike and the rest of the mercenaries encounter the laguz countries of Gallia, home of the Beast Tribe, and the Bird Tribe countries of Kilvas and Phoenicis, as well as the kingdom of Begnion. 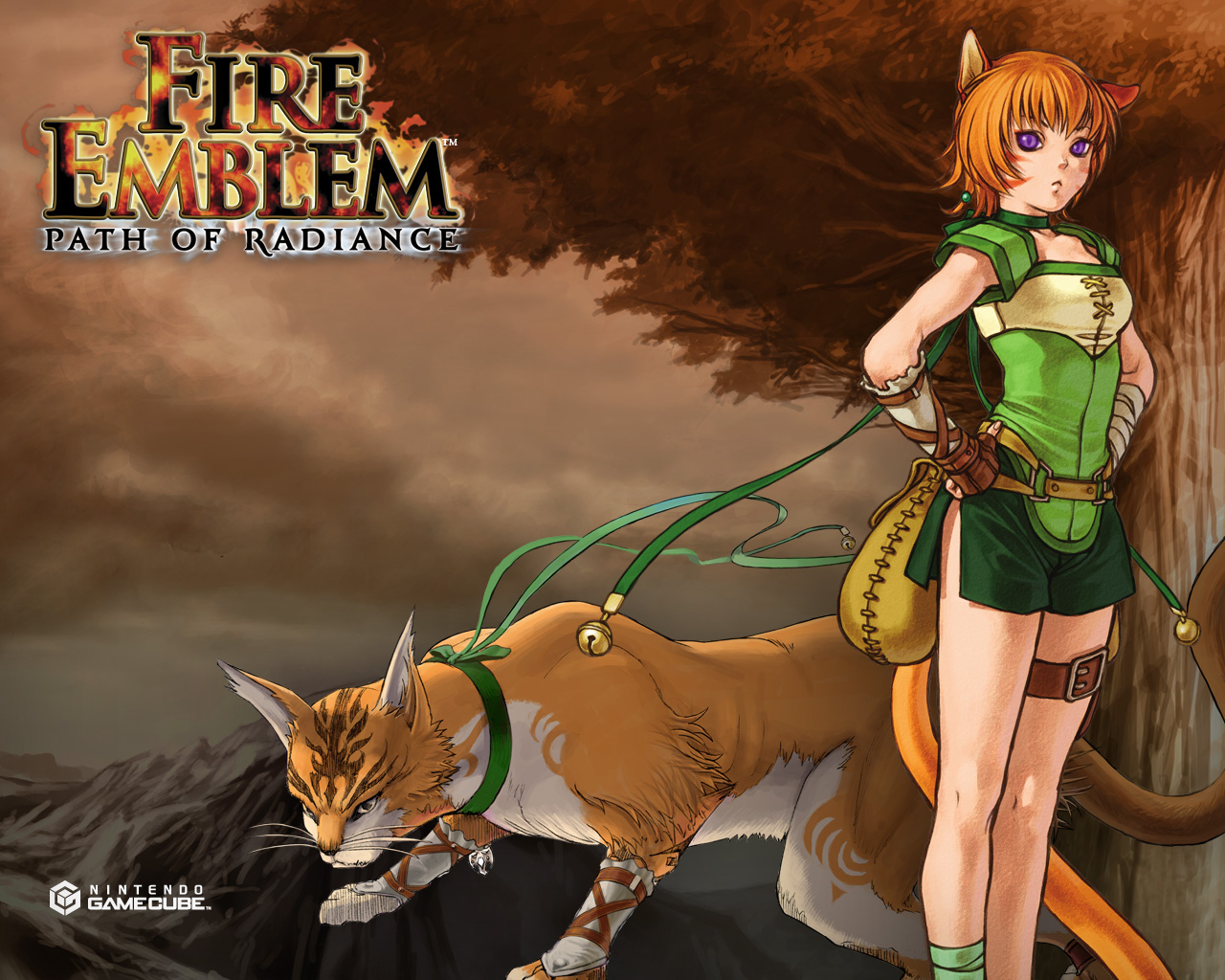 The two forms of Lethe, one of the members of the Beast Tribe that joins you in your quest.

Path of Radiance is also the prequel of Fire Emblem: Radiant Dawn, a Fire Emblem game that was released on the Wii. Radiant Dawn continues the storyline established in Path of Radiance and features the same characters. If there’s one thing I love, whether in video games, movies, TV shows, or books, it’s continuity.

As of this writing, I’m already at Chapter 26, after almost 24 hours of play. Now that I’ve reached the good parts of the story, I don’t see any of my other games being compelling enough to interrupt me from completing this game.