The next game on my list is an action/adventure game released not just on the Gamecube, but on all three 6th Gen consoles: Beyond Good and Evil. In Beyond Good and Evil, you take on the role of Jade, a female human who is living on a planet that is besieged by an alien called DomZ. Together with Pey’J, a piglike humanoid creature, she has taken it upon herself to raise and care for several orphans who lost their families because of DomZ attacks. 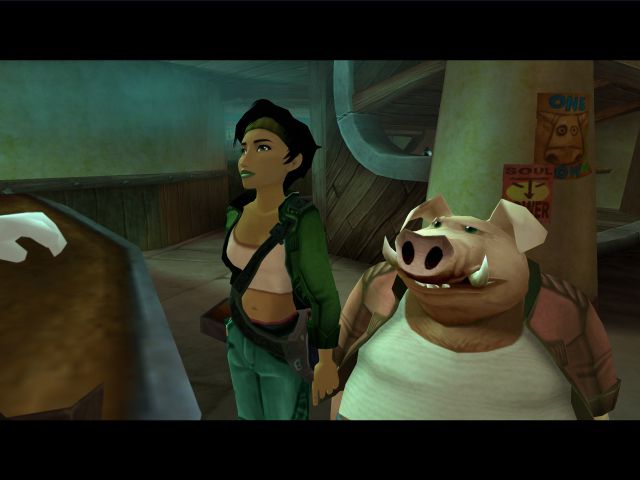 In order to raise money for their expenses, and especially to keep their electricity running as it powers the shield that protects their home from DomZ attacks, Jade takes on the job of photographing different lifeforms for a science institution. She also gets hired by a mysterious employer, which gets both her and Pey’J involved in several missions from an underground rebellion against the Alpha Sections, a military task force that appears to be defending the planet from the invading DomZ.

Gameplay involves exploring the world, moving from location to location as you complete your current mission objective. Often, you’ll be using your hovercraft to travel, which is kind of similar to The Legend of Zelda: The Wind Waker. 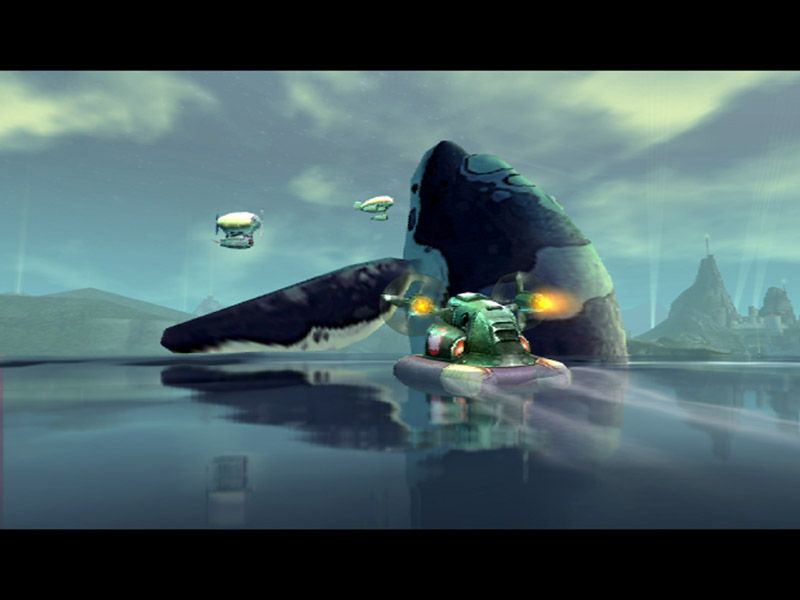 Taking a picture of that whale will net you a lot of money in the game.

Every now and then, you’ll be subjected to battles as you face off against hostiles. Your attacks are limited to pressing one attack button and there isn’t as much depth in the combat system as is usually available in action adventure games, but it works. What sets Beyond Good and Evil apart from most action adventure games for me is the availability of a “partner” character that goes with you on certain missions. These “partners” are actually essential in completing the game, as they have certain abilities that you’ll need in getting through the many obstacles that the game will throw at you, such as pushing a heavy object to a specific place, or breaking through barriers that you would not be able to deal with on your own. 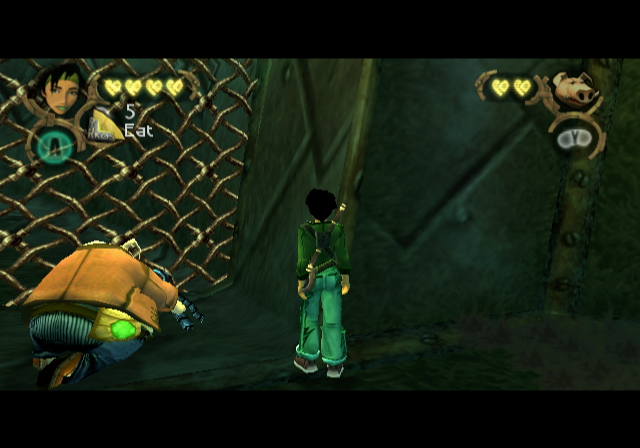 Jade won’t be able to make it through that fence without Pey’j.

Initially, you’ll be exploring the planet looking for new lifeforms to take pictures of, but your quest increasingly strays away from this as your jobs for the rebellion become more difficult. It’s funny but in a lot of the boss battles, you’ll have to find a way to take a photo of the boss monster before it kills you. 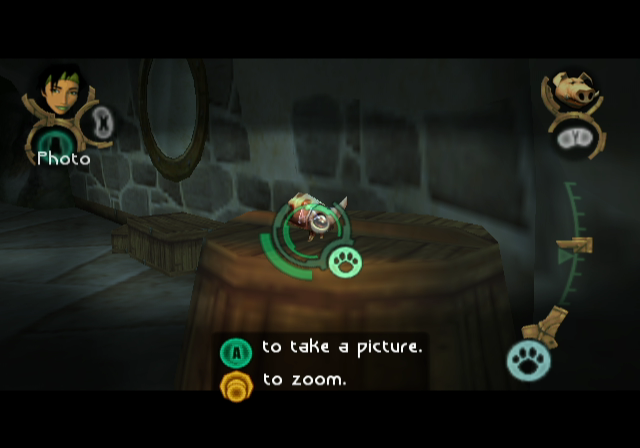 You’ll also find yourself hunting for Pearls, which you’ll trade in for important equipment that will help you advance in the game, such as upgrades to your hovercraft. 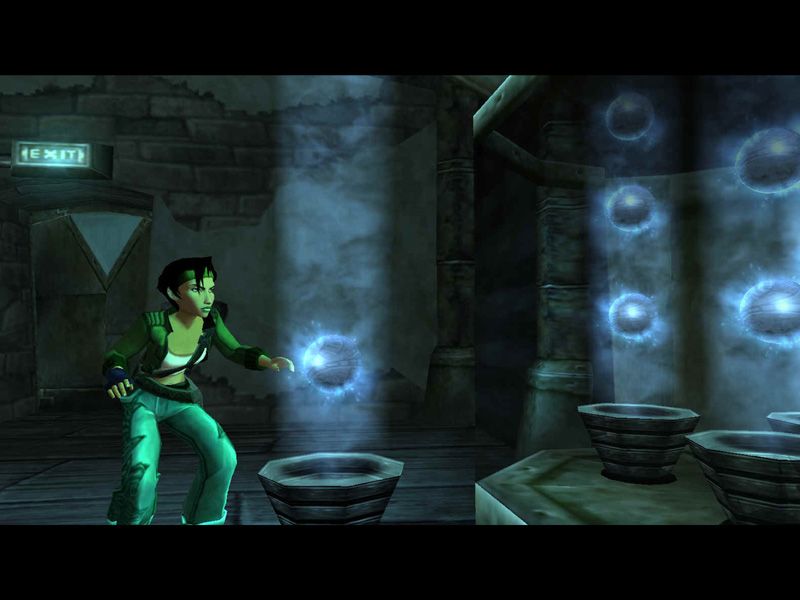 There are 88 Pearls in this game, and getting them all unlocks a little secret.

Most of the time, Jade can resolve issues with her stick, but there are those moments when things just get too overwhelming and Jade instead has to rely on stealth to get around, which works quite well. During these times, if you get caught, it’s game over.

To break the monotony of the gameplay, the game also offers racing minigames. The racing aspect is quite simple but works well within the context of the game – you won’t find yourselves fussing about speed upgrades or whatnot just to win races, allowing you to focus on the game’s main objectives.

Beyond Good and Evil was critically acclaimed when it came out, receiving mostly positive reviews on each of its three versions, but sales were poor so nobody I know personally has played it. Which is unfortunate, because this is a solid game that’s well worth playing. I do have one complaint about the game though, and it’s something that a lot of people have also talked about in reviews – the game is too short! I haven’t even had 8 hours of gameplay and yet it already feels like I’m nearing the game’s conclusion. I’ve already gotten all of the vehicle upgrades, I already have all 88 Pearls, and yet I don’t feel like I’ve done a lot in this game already. I can certainly understand the disappointment of a lot of people when this first came out, especially if you compare this to the games that were available at that time – if you had the choice, would you rather spend your money on a great game that’ll keep you occupied for months, or a great game that you’ll finish in less than a week? The game’s length kind of works to my advantage as I’m trying to finish as many Gamecube games in my collection as soon as possible, but if I were considering purchasing this at the time it came out, I might have opted for something longer.

Still, I’m glad this is part of my game collection. I’ve actually had Beyond Good and Evil since getting my Gamecube 6 years ago and I’ve been ignoring it, opting to play other games instead. And now, after playing through the first sequence, I’m hooked! As a testament to how good the game is, a remastered HD version was released for the XBox 360 and Playstation 3. I’m not sure how that fared, but I’m glad to say that almost a decade since the game’s original release, plans of making a sequel are still underway.