The Punisher: The Ultimate Payback is another attempt from LJN to bring the Punisher to video games. I never even knew this game existed. Unlike other comic book games published around the time, I never saw any advertising for this game in any of the comic books that I was reading back then. I’ve been burned several times by LJN games, so I was both curious and wary about this game. Let’s talk about my experience with it. 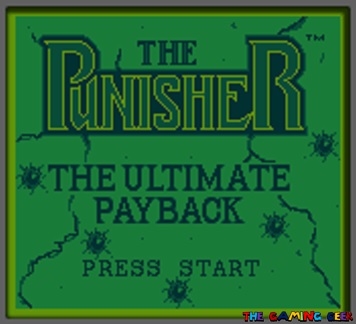 Title screen for The Punisher: The Ultimate Payback on Nintendo Game Boy.

The Punisher: The Ultimate Payback is an on-rails shooter developed by Beam Software and published by LJN under Acclaim Entertainment. Yes, they pulled off putting an on-rails shooter on the Nintendo Game Boy. There are five stages in this game. Each one is from the viewpoint of the Punisher as he scans these various locations for bad guys. The stages scroll automatically to the right, pausing at pre-defined moments.

The first stage in the game happens in a mall, complete with civilians doing their day-to-day shopping.

There is a video game for the Punisher on the NES which follows similar mechanics. Unlike that game, this is completely from the Punisher’s perspective, so you do not see him on screen. What you control are his crosshairs, indicating the spot where he’s shooting at. 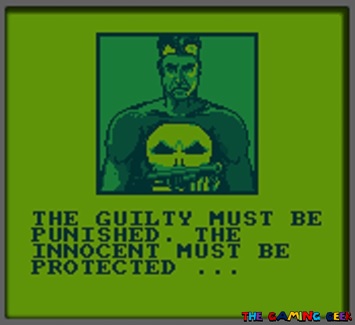 This is the Punisher’s M.O., plain and simple.

Enemies can pop up from anywhere on the screen, and they do so frequently. If you don’t kill them immediately, they’ll start shooting at you and you take damage. You have a health bar and you start the game with 5 lives. There are no continues so if you run out of lives, you need to start over. Thankfully, when you lose a life you are granted a few moments of invulnerability, then you can continue from that point in the game.

The Punisher has two attacks – a regular one using his primary weapon and a special attack using grenades. Grenades are an area of attack and the Punisher can carry up to nine at most. These are effective for disposing of enemies in a cluster. However, if your enemies manage to form a good-sized cluster, you’re already in trouble. I used them for bosses too.

The second stage is at the docks, where illegal shipments are probably happening.

The primary weapon is an automatic weapon with limited ammo. Ammunition is counted per magazine and per bullet. When you run out, the Punisher reverts to using his pistol. I’m not sure if there is an impact to damage dealt, but the pistol’s rate of fire is definitely much slower.

The game has a multitude of power ups to help the Punisher. These range from ammo, grenades, different firearms, and health boosts. The most important power ups are the ones that give you additional lives. Enemies drop power ups sometimes when they are killed. You can also shoot various objects in the levels, and they can sometimes contain power ups as well. Most of the power ups seem to spawn at random, except for the extra lives which seem fixed.

You also get bonuses at the end of every level depending on how many of the bad guys you kill. As far as I can tell, if you kill everyone that showed up on your screen, you get a bonus life. So you need to be aiming for that 100% if you want to beat this game.

You face a lot of different goons and gangsters in this game. I was too busy killing them for me to tell if there are differences, aside from how they look. They all have the ability to shoot you, so I did not bother analyzing their abilities.

There are also a few civilians mixed in with the bad guys. They don’t shoot at you, but they are your most dangerous enemies. Why? You lose a big chunk of your health when you hit them. And despite all the shooting happening around them, they have the desire to walk right between the crossfires. Despite the game’s poor graphics, it was easy for me to tell the civilians apart from the bad guys. I did need a bit of time to be sure of all the bad guys – some of them looked innocent at first. It wasn’t when they started shooting at me that I realized my mistake.

Jigsaw is the only character I recognized in this game.

At the end of each stage is a boss fight. I have to say, there’s a good variety of the boss fights in this game. You fight either a mix of a big boss character and his henchmen, or vehicles carrying a lot more henchmen. In case you end up trying this game, I won’t say any more so that you’ll have some surprises waiting for you.

I do wish that the boss fights had better mechanics, like hitting them from a certain spot would stop them from firing at you. Boss battles are a war of attrition in this game. You need to kill them as fast as you can so that you can save as much of your health for the next stage.

In terms of graphics, The Punisher: The Ultimate Payback is quite mediocre. I’ve seen much better backgrounds and sprites in other Game Boy games. The developers could have done much better as their pixel art looks quite amateurish. Sometimes, the levels get in the way of the game as the enemies can be hard to see, but I think that is part of the design.

The game’s music is also quite mediocre. It does it’s job, but is generic and repetitive. Nothing that hurt my ears though. I’m not sure if I want some death screams. That’s certainly absent from the game but with all the killing going on, adding them may become annoying.

Spider-Man asking the Punisher for help? This game is definitely not canon.

The game makes use of some cutscenes to tell the general plot. Like always, I wish they used comic book panels instead of just headshots and text. Most of the cutscenes involve the Punisher monologuing, but Spider-Man does talk to him at one point. Seeing both of them in comic book panels would have added to the presentation value of this game. 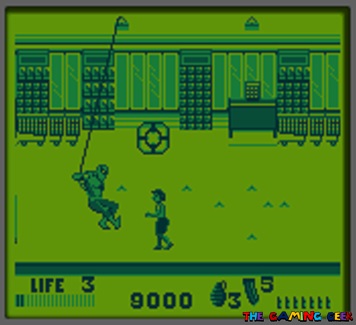 Spider-Man does what a spider can! Which doesn’t include fighting bad guys, at least not in this game.

It was neat seeing Spider-Man pop up in the first level. I’m not going to spoil how and why that happens. If only he had a better looking sprite.

The Punisher: The Ultimate Payback is a straightforward on-rails shooter. Unlike other LJN games, there wasn’t anything broken in this game. It can be on the difficult side, but nothing that seems unfair. Allowing you to continue instead of sending you to the beginning of a stage when you die is something that I was very thankful for.

This game is a test of how fast you can shoot the enemies so that you can conserve as much of your health and your lives. That’s pretty much what you’d expect from an on-rails shooter. There aren’t a lot of innovations in this game, but I think even being able to develop one for the Game Boy is already a good thing in itself.

The game is pretty short with only five levels. If you want a portable shooting experience, I can imagine that The Punisher: The Ultimate Payback would have been a great option during that time. If you only have access to a Game Boy and you want portable on-rails shooting, you could give this one a look.

For more video games based on Marvel characters, click here. And click here to check out every Game Boy video game that I’ve played.